First Redfish and Trout on fly 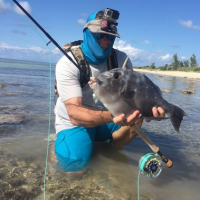 Docked Wages General Fishing AdministratorRockledge / BahamasPosts: 3,127 Moderator
December 2011 in Fly Fishing #1
With my ride still in the fiberglass shop (http://forums.floridasportsman.com/showthread.php?29066-Pictorial-of-Maverick-Hull-Repair) I took the kayak over the weekend to target new species on Fly. First task was to reconfigure the family recreational kayak into a modified fishing kayak. Here I added pole holders to a milk crate and tethered all the necessities to the sliding seat rail system. This included a boga grip, a pair of van stals and a towel so that everything was within reach and accessible.

There was a stout East wind so I paddled across the ICW to the east shoreline targeting an area that offered a tidal flow between two bodies of water. The outgoing tide worked perfectly as I started at the mouth and drifted with the current. After a few drifts I finally figured out how to cast while sitting in a kayak. I began to cast broadside from the sitting position and into the the current. Eventually I was rewarded with my first redfish and first trout on fly. Nothing huge but two more species off my fly bucket list.