gogittum Nature CoastPosts: 3,645 Captain
October 2021 in Boating #1
With the gear shift problem sorted - finally - on my Suzuki DF25, I did some homework, then headed for the coast yesterday.  Barge canal is about ~30 miles from home.  I've read endless stories about the shallow, lower unit eating, water out there so spent some time on Google Earth and with Hot Spots to plan a route.

Question:  Barge canal is at the end of the Withlacoochee River and is open to the Gulf, so is the Hwy 19 ramp fresh water from the river or salt from the Gulf or does it depend on tide ??  I'm not overly crazy about the idea of tasting it to find out. 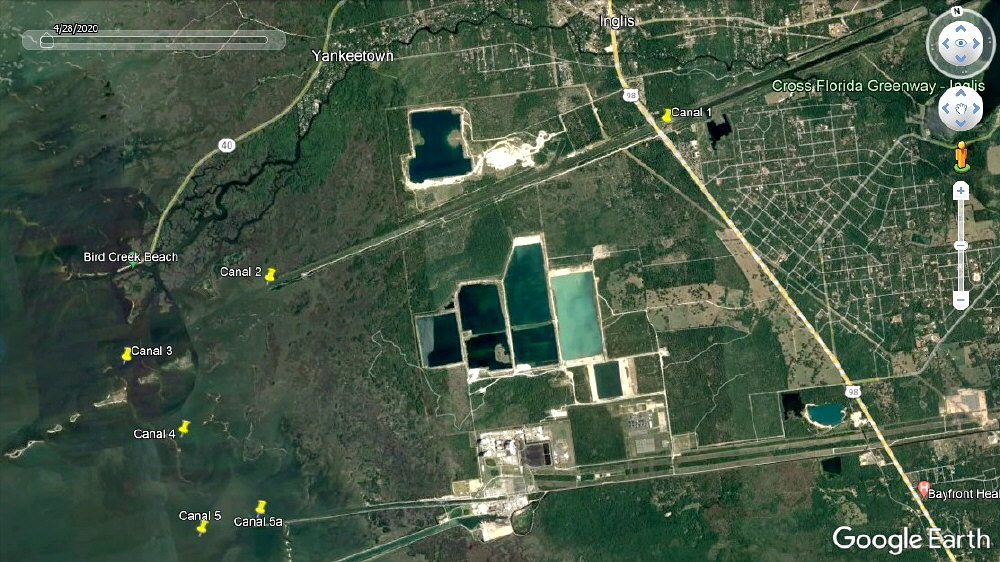 I wanted to get to the warm water outflow from the Crystal River power plant, so set up a string of waypoints and entered them in the Lowrance at home.  Launched at Canal 1 and made the loop to Canal 5a.  Worked fine and had plenty of water the whole way.  Total distance is just under 9 miles each way.

Forecast was for 5 - 10 winds and 1 - 2 ft chop and that's about what I found.  Tide was low.  The 16 ft Starcraft is light but has a V bottom and good entry, so it soaked up the chop easily and cruised at an easy, quiet 22 mph.  When the chop got heavier on the way back, I slowed to 18 mph and sliced right thru it with no problems.

I've got a bit to do on the transducer - that long, skinny thing is mounted on a wood block with the metal supporting frame about <1/2"` above the line of the bottom with the whole thing angled very slightly down.  It throws an enormous amount of spray and a lot of it comes over the transom into the boat.

Only 1 other boat at the buoy line and he was at the south side, so tied up near the north end and rigged a 1/4 oz white skirted jig head on my 15# line and started pitching it.  Nothing specific in mind - there's lots of species out there and I just wanted something to pull - hopefully hard - on my line.  I fish catch & release only.

Not counting the tiny Bluegill in the river last April, this was the 1st time I've been fishing since 1996.

Uh-oh - I quickly noticed water pooling around my feet and was puzzled - is the transducer throwing "that" much water ??  Started the bilge pump and got rid of that....and 5 minutes later it was back again.....worse.  Uh-oh.

Moved some stuff around and under the rear seat I saw where a rivet had popped and I had a 5/32" hole sending a small fountain of water into the boat.  Well, scheiss, OK, bilge pump can handle it but I haven't installed the spare yet and bilge pumps are notorious for getting plugged up or motors fried.

I do have a bucket and could bail, but for that distance in a tiller steered boat, it'd be very awkward.  I'd only pitched that lure a 1/2 doz times, but packed it in and headed back.

First thought was that I'd picked up a piece of plastic on the lower unit, as I did with the 15 hp Johnson in the canal a couple of months ago.  Tilted the motor and it was clear.  Oh well.  Left it tilted.

Well, hokay, only about a mile to go, so shipped the oars and started at it.  I prefer to row facing forward and pushing the oars; breeze was at my back so moved along pretty good - considering that 16 ft planing hulls aren't designed to be rowed.  That style of rowing is goood for the pecs.  After about 1/4 - 1/2 mile a group of guys on a Sea Pro at the ramp area saw me and came to see what was wrong....then very nicely offered to give me a tow.

Nice of them and it was greatly appreciated.  The last 1/4 mile was done the easy way.  Now I get to tear into the lower unit yet again......which brings up another question that I'll start a new thread on a bit later.