gogittum Nature CoastPosts: 3,263 Captain
May 2021 in Boating #1
The little 12 ft Mirrocraft I've been working on is simply too small for me so jumped on a chance at a good deal on an older Starcraft 16ft.....the lighter utility version.  Figured it'd be small enuf to get around in the creeks and all, but still light enuf to muscle it off sandbars, etc. when necessary. 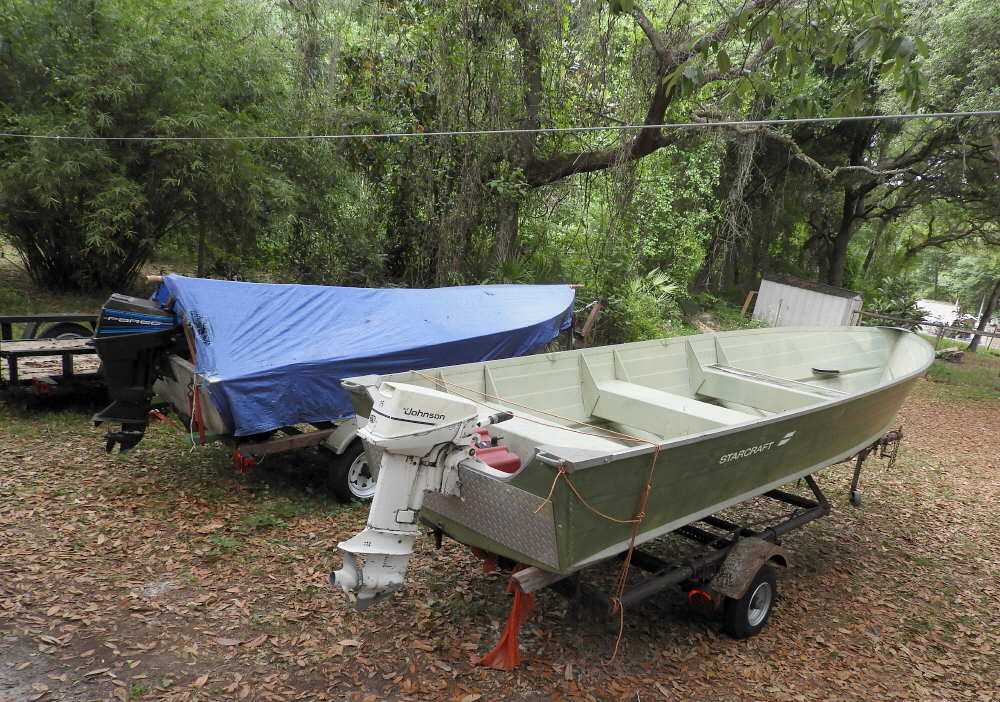 I got it for a fair price, but figured it was for the boat only.  Motor looks rough and I didn't even pull the cowling - figured if it ran it'd be a bonus, but more likely a write-off.  Trailer was almost a deal breaker.  Great big ugly thing, covered in rust, tiny wheels.....didn't like the looks of it at all, but I went ahead with the deal.

Boat turned out to be a gem.  Light enuf (around 300#) that I manhandled it off'n the trailer the other day by myself without strain.  It's an even 16 ft long x 63" beam x 20" freeboard from chine to gunnel.  That makes it capable of going into the salt on nice days - inshore only.  Many plans for the boat, but gotta get something going to move it on.  Aaaaghh.....looka that awful trailer. 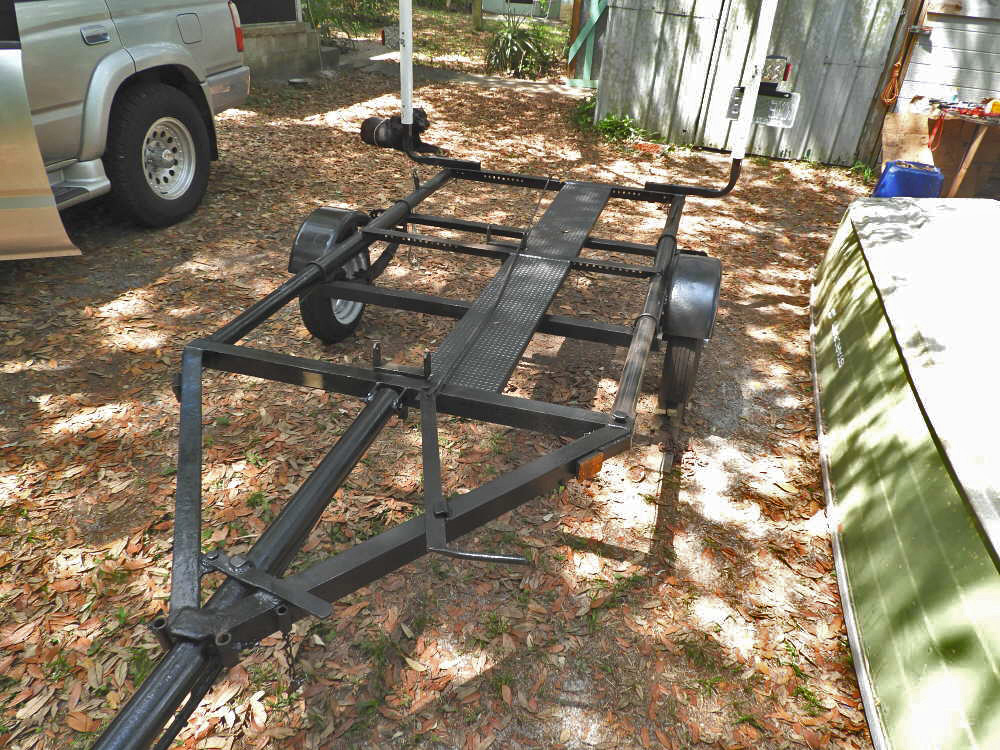 Mmmm....maybe best not be too hasty here.  I cut some of the crappy rebar reinforcement off it and that made a huge difference in appearance.  It's made of heavy wall 2 3/4" steel tubing with heavy 1/4" steel gussets.  Built for a much heavier boat, it's more than enuf for my little Starcraft.

I put a laminated sanding/grinding disc in the angle grinder and tried a couple of spots.  With rust gone, it's well pitted but still very solid.  Pitting is cosmetic at this level.  Sooo....I put in about 8 solid hours grinding, then painted it and am well pleased.  It won't win a beauty contest one, but will do the job I need quite well. 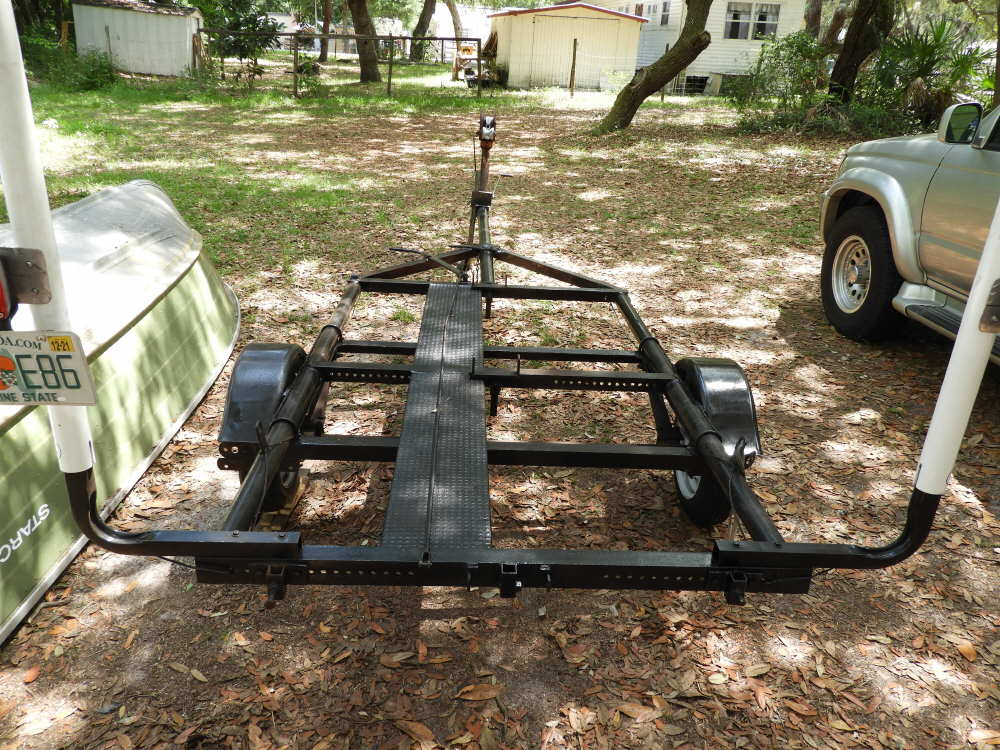 I also put new 20" tires/wheels with new grease seals, bearings and Bearing Buddies and heavy duty guide-ons.  Mounted the lights and plate at 40" to keep them out of the water.  Never have found lights - LED or otherwise - that hold up to repeated dunking.  Looks to me like a good solid base to work from.

Now for the questions for you guys. 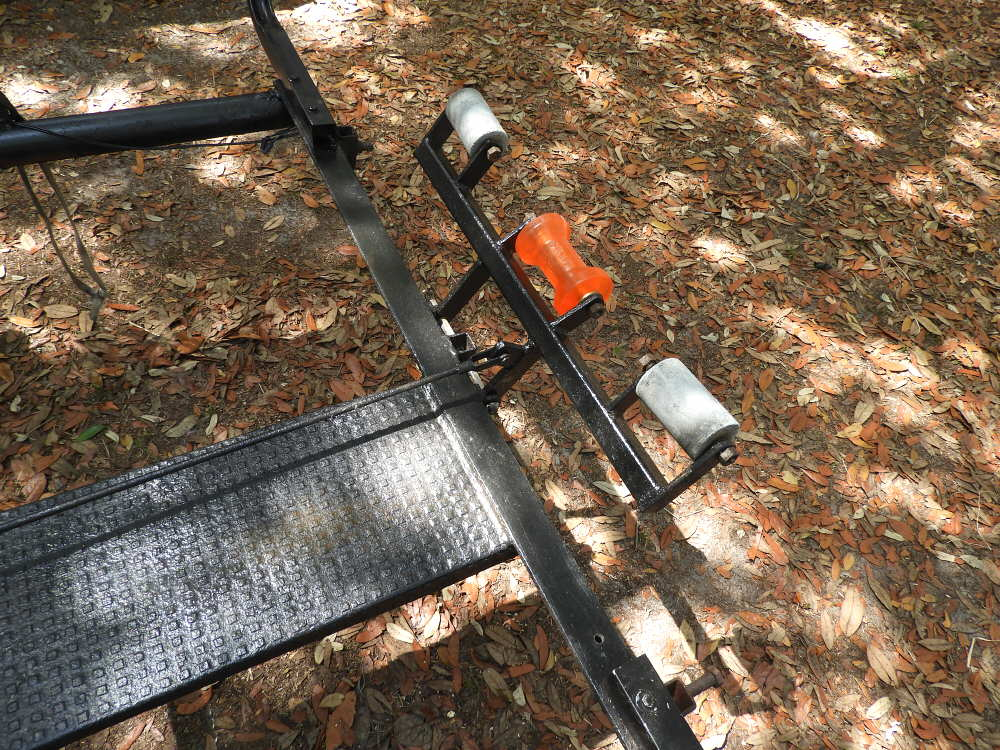 At the rear of the trailer is this pivoting arrangement.  Angle is correct for the V-hull of the boat.  Lays out flat and comes up to almost vertical.  Never seen the like, but I think I can see the benefit.  Trouble is, it's far too high and needs to be dropped several inches.  Not a problem there but it will disable the tilting function.  Thoughts ?? 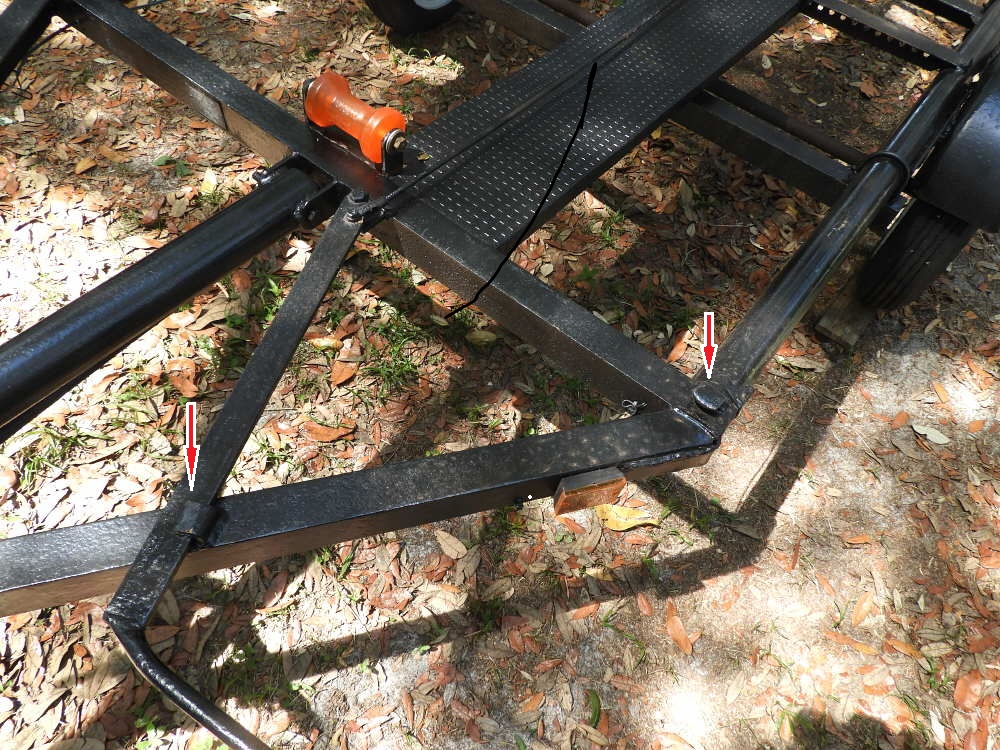 This is the actuating lever at the front in up position.  You can see the hook farther back to lock it in down.  I don't have a problem with this, but don't really see a need for it.  Has anyone seen anything like it ?? 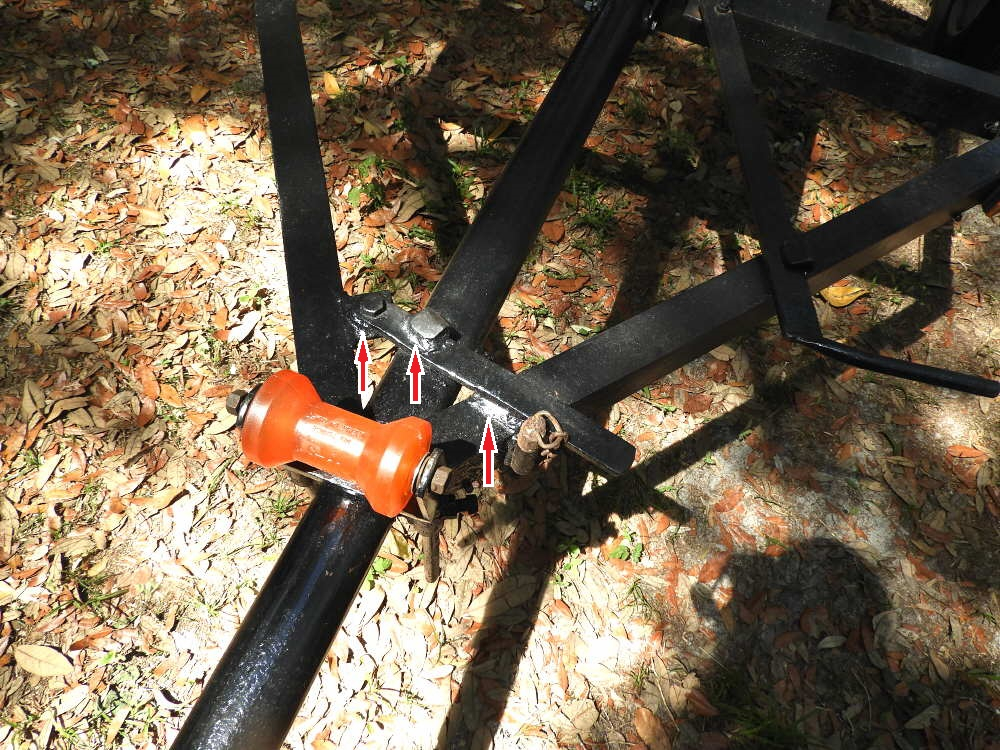 This one has me baffled.  It was originally built as a tilt-bed trailer, which I love the idea of, but some previous owner didn't like it - or had trouble with it - to the point he welded the whole mechanism solid.  This shows the actuating lever, held in lock position by a heavy (unpainted) pin.  Three welds hold it locked. 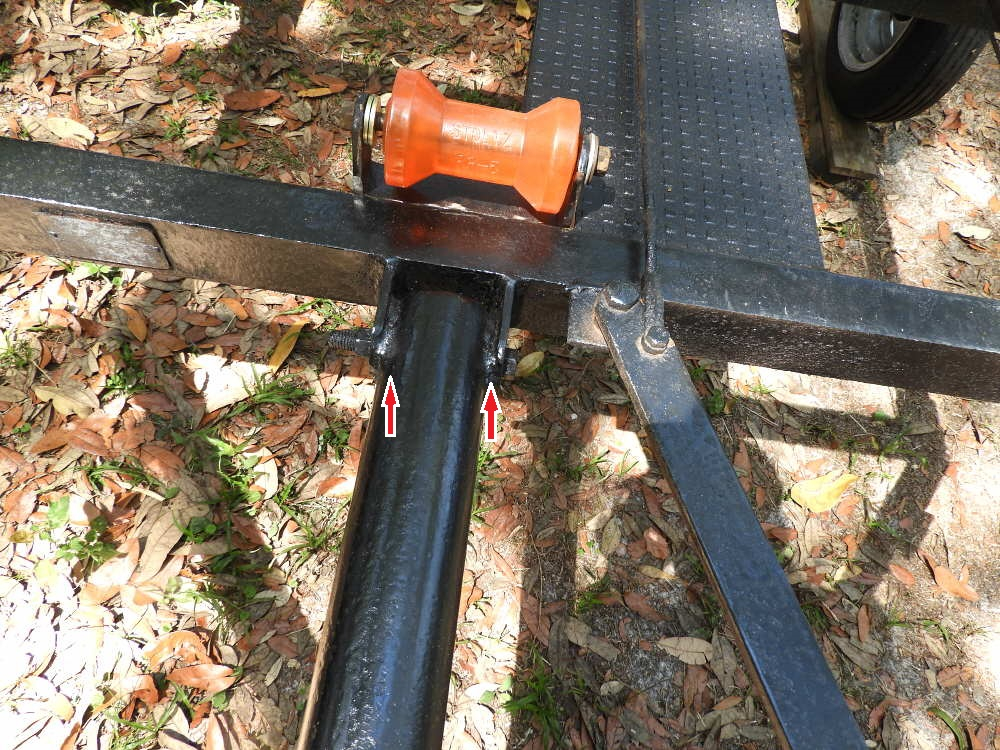 The pivot point, with 2 more welds/ 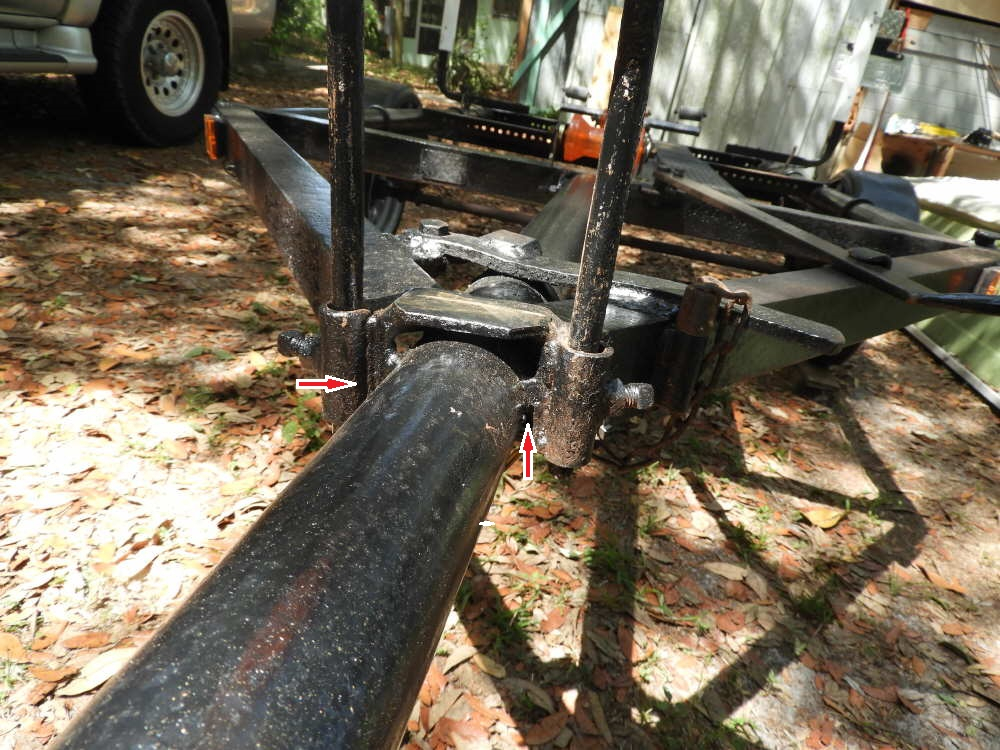 ......and the front of the tilt portion with 2 more welds.  To me, the tilt bed is a highly desirable feature and I can't fathom why the guy had it welded so solidly.  I can cut those welds out easily enuf and restore the function, but maybe I'm missing something ??  Don't want to shoot myself in the foot on this.