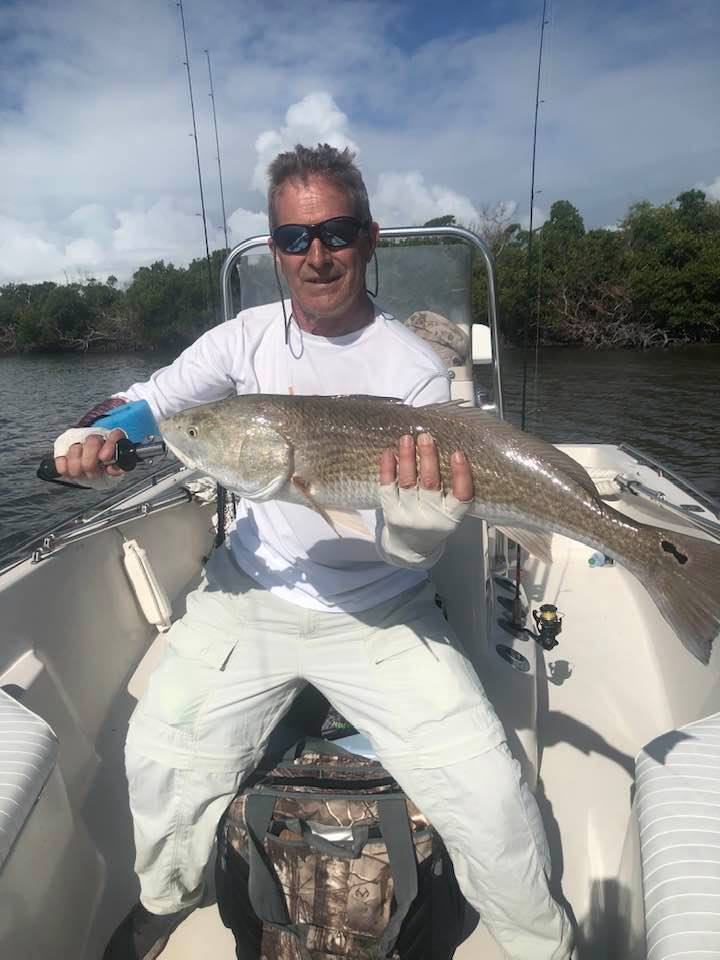 We missed this bruiser Thursday when he straightened the hooks on the spook jr. Dark and stormy, it was, and the water was black but after he wrapped around the trolling motor a couple of times and under the boat a time or two we got him in the net. 26 7/8 inches. Got a few snook and a trout this morning too. Back at the marina by 1030.

Brother from Kansas was in town last week so we fished (I still say if I didn't have the boat, he would visit a lot less) 4 of the 6 days.  As far south as Stop Keys and north to Goodland.  We found most of the larger fish in the back.  The redfish pictured above is the only one we found.  Several snuke to 22", a few trout, snapper and ladies, I was the catfish king with 3 in one day, and many small jacks.  We fished mostly in the mornings usually back at the marina by noon.  We tossed a variety of hard baits, spook jrs., red and white, bone, and silver, yozuri 3d vibes, orange and brown mostly.  Flathead bucktail jigs tipped with frozen scrimp.  Soft baits used were white or chartreuse paddletails and some 4" jerk baits on a red 1/8 jighead.

Bite seemed a little slow for this time of year.... or it might have been the wind, the tide, the moon, the barometer, the temperature.... nothing to do with our skills.

I hope to see more reports... but chatter will do, I guess.

"If it's not one thing, it's an alternator"