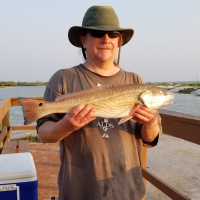 Drifting_By ChicagoPosts: 169 Deckhand
March 2021 edited March 2021 in Southwest General Fishing & The Outdoors #1
So I was fishing Ding Darling today and working it hatred but after 5 hours had only managed a rat red, a small snook, and a decent trout. It was beginning to rain and I was thinking of calling it quits when I heard a HUGE blowup behind me.  I spun my head around in time to see something huge thrashing the water, and then swimming away leaving a huge wake. At this point I'm thinking it's a dolphin and wait for it to surface again. That doesn't happen but a few minutes later presumably the same beast starts disturbing the water about 50 yards away from the site of the first blowup, then swimming away again pushing a huge wake as it went. I still haven't seen a fin or a spout so now I'm thinking this is a really big fish. So I started throwing a Zara Spook because you never know!  I next see it again in the firm of a huge wake moving fast about 25 feet away from me but it's raining pretty hard at this point so I can't see under the surface to identify it, of course I cast in front of it but nothing doing. That was the last I saw of it.