For the first time in over a year I was finally able to make it out on the Yankee Capts. (Life reared its ugly head and got in the way. [estate sale, house sale, move, medical issues, etc.])  Things started off a bit disorganized since my fishing gear was scattered between my garage and an over-stuffed storage unit.  On top of finding the gear I had to figure out how to fit it into a new vehicle. 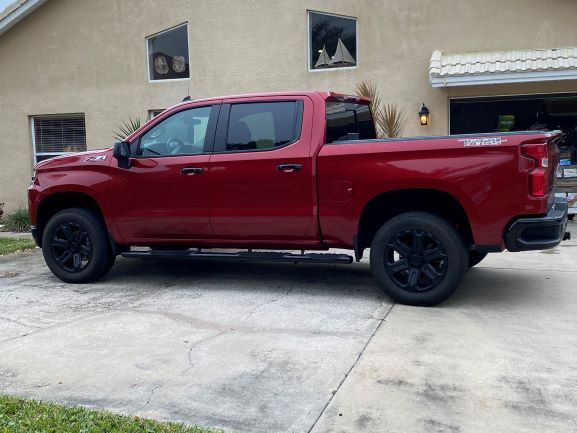 Had to show it off at least once!

It wasn’t long until my fishing partner, Mike, and I got everything under control and were on our way. Due to the boat’s departure time (3 pm), a 7 – 8-hour drive and picking up bait along the way we decided to spend the night in Florida City.  This worked out well.  After a good night’s sleep we got on the road in time to arrive at the boat around noon.  There were a few people who had already loaded their gear on board when we arrived.  With the mates help, it wasn’t long before we had our bait iced down and gear on board also.  Soon we were catching up with Greg, Lyndon, Chad, Brizo and a couple unfamiliar faces, Jacob and Jeff, new mates (to me, at least).  It was clear that, as always, the crew had been busy cleaning and maintaining the Yankee Capts in addition to fishing during the last year.  The Yankee Capts was just as clean and welcoming as always.  What appeared to be a recent paint job, reorganization of the bunks and installation of AC in the main cabin were just a few of the obvious updates.

We departed the dock at 3 pm as advertised. Greg made his usual announcements and said that we should start fishing around 1:30 am.  After Chad’s delicious shrimp alfredo dinner, it was off to the bunks to get some sleep.  As usual, the weatherman wasn’t quite on point.  When I woke up and went up on deck it wasn’t the 3 – 5-foot seas I was expecting.  The waves were probably more like 4 – 7 feet.  Still quite fishable but it took us a little longer to get to where Greg wanted to start, so I believe it was around 2 or 2:30 am before we started fishing.  It wasn’t long before the sea anchor was deployed and a few fish started coming over the rail.   This would be the pattern for the next 2 days.  I can’t think of a period of more then a few minutes when someone wasn’t fighting a fish. There was always a mixture of people fishing bait and some using jigs.  I believe that, in general, bait out fished the jigs but maybe that’s because I'm a little prejudiced.  I haven’t succeeded in learning to slow pitch.  The only thing I caught on a jig was a sand tile.  The fish didn’t seem to have a preference for one type of bait or another.  I caught fish on butterflied goggle eyes, ballyhoo, squid and strip baits.  With the boat on the sea anchor and the constant changes in wind and current the drift would run off one side of the boat for a while then it would change to the other side.  With 22 anglers, it wasn’t a problem switching from side to side but can become a bit annoying if it happens to often. 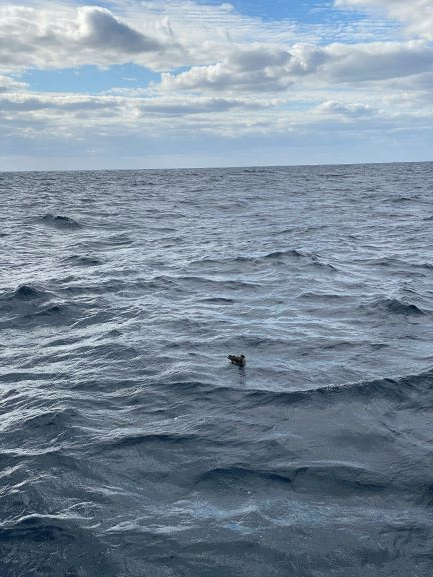 Saturday afternoon after the sun made an occasional appearance and the seas calmed down a bit. 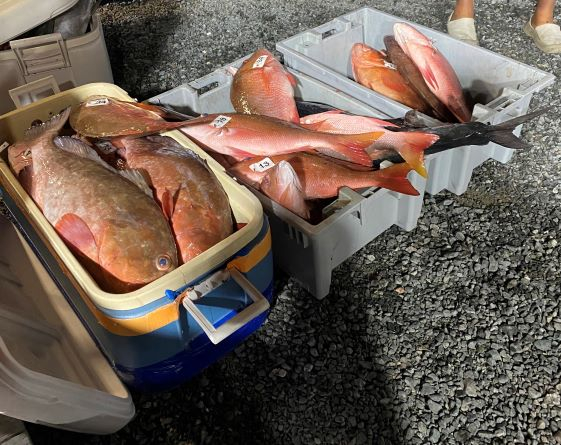 Not a bad catch for the two of us, especially considering we were tired and didn't spend a lot of time at the rail on Saturday. 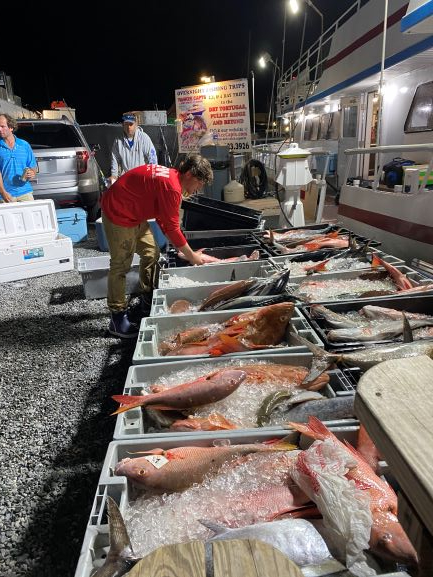 Back at the dock it was time for the usual fish toss. There were 31 totes consisting mainly of red grouper and mutton snapper but black fin tuna, mahi mahi, king fish, scamp and black grouper, almaco jack, sand tile and a cubera snapper were also caught. There may have been other species caught but these are the ones I remember seeing. 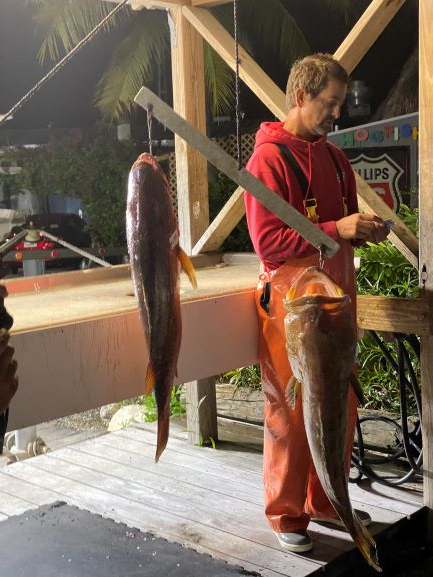 A nice black grouper just beat out the cubera for the pool.

I can’t emphasize enough how much the crew adds to the enjoyment of a trip like this. Actually, because of back problems I couldn’t make these trips if they weren’t there to help carry my coolers and gear on board.   I understand that Jacob and Jeff are fairly new to the Capts but they were right by your side to help you with your tackle or to gaff your fish whenever needed.  (I’m sure they have had a little “coaching” from Greg and Lyndon.

)   When the mates weren’t busy helping someone they were cleaning the fish slime and blood from the boat. If you want to go on a clean boat then go on the Yankee Capts.  I was going to write that I don’t know how Greg keeps the boat so clean but then on the way in I saw the First Mate, Lyndon, down on his hands and knees scrubbing around the railing posts with a small scrub brush.  You don’t see that on many boats.

If you do a trip on the Yankee Capts be sure to get the meal plan. It is well worth it. The meals that Chad manages to put out of the small galley are remarkable.  We had shrimp alfredo, filet mignon w/potatoes & asparagus, seared scallops and crab cakes on rice, buffalo chicken tacos, breakfast bagels w/eggs, bacon & cheese, burgers, all the fruit, chips, various snacks, donuts and danish you could want, plus ice cold water and sodas.

Lyndon did a bang-up job cleaning our fish and then it was back on the road home.  I had forgotten how tiring, but enjoyable, these multiday trips can be.  It won’t be a year before my next trip, in fact, look for another report next month.

(After looking at the few, poor pictures I took, I’ve resolved to try to do better on future trips/reports.)