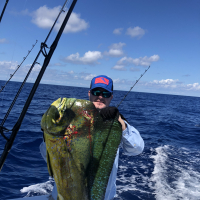 bluewater_fever Posts: 130 Deckhand
June 29 in East Central General Fishing & The Outdoors #1
Decided to do an evening trip on Friday. The plan was to target mangrove snappers around 90ft/SISA area. Bought shrimp and caught some mullet, thread-fin, and some other stuff. The evening bite was pretty good in 60ft or so. Caught red snapper, lanes, and some other stuff. Moved out to 90ft and the grunts were thick. Decided to move back to 60ft and about that time it went dark. Once the sun went down the bite completely shut down. Nothing would touch a live shrimp. Before the sun went down the reefs were lit up; after the sun went down they were barren on the sonar. Anybody seen this before?