CaptainBly Posts: 2,341 Captain
June 29 edited June 29 in West Central General Fishing & The Outdoors #1
So, just got back from some of the worst fishing I have had in Boca Grande in the 20+ years I have been going down there.  First trip got blown out by that tropical storm, 2nd trip all the fish left the pass and were all over the beaches but seemed to have lockjaw.  Went offshore a couple times only to be goliathed to death...  So we had a great time but fishing was less than stellar.

I was almost afraid to ask the mrs to go out this weekend but weather looked awesome so I tried to put a crew together.  All the regulars and even some not so regulars were unavailable.  Will came through for me though and found a couple guys to go so the trip was set.  Will, Vincent, Mr. Lam, myself and my son Tyler headed out on Sunday.

Game plan was 55 miles out to some #'s I haven't even tried in the new to me boat.  My buddy Mark had fished them but it had been a few years.  But he said it was the best ars fishing he has had.  So, with dead calm seas, off we go.

Put pinfish traps out the day before and they had a few dozen in them.  Good snapper size ones.

Got some threadies at one of the markers an got maybe 20 or 30 white bait at the bay pier.  I had a lot of dines and squid so figured that should do us for the adventure.

Water was like glass.  Cruised at 40-43 miles per hour and not even a ripple...Thank goodness for that saharan sand that I assume is what kept it kind of overcast because it was hot but would have been ridiculous if it was bright sunshine.

Get to our first spot and the show was less than spectacular unfortunately.  I had 3 or 4 other #'s in the general area so we started circling around.  Find a decent show and drop the buoy.

Will pulls up an 18" ARS pretty quickly.  We contemplated not keeping it hoping for bigger ones but decided we could keep 10 and it was the first fish in so we kept it.  Couple more ARS and then one of us catches a mango.  Hmmm...  Mangos too.  BONUS PLAN....  Then it was pretty much game on.

Vincent, Mr. Lam and Will were fishing mostly bottom carolina style rigs.  Will had 30 lb test, not sure about the other two.  Tyler and myself fished 3/8 oz jigs pretty much all day long.  It didn't really seem to matter.  Everybody was catching fish all day long and the fish were eating everything.

This first area was about 4 miles south of the actual pipe.  137-140' of water  It slowed down after a bit so we headed over to some pipe #'s.  Found a show and basically the same thing.  Fish just flying over the rails.  That slowed down and the cooler was pretty full so we decided to start heading in.  Will did an ARS count because frankly it was so hot and heavy I wasn't sure where we were with that and we had only kept 7.

I had one spot that seems to hold ARS about 15 miles in closer to where we normally fish, 105' of water give or take, and we get to it and sure enough the screen explodes with color.  So we drop and right away a nice size ARS comes up.  Thinking we should make very short order of those last 3 ARS.  But it was not to be.  The tide had picked up a little bit so jigs were getting pretty far away from their target.  We had plenty of fish, box was overflowing, so we made the call to head in.

We tuckered poor will and Mr. Lam out I think.... 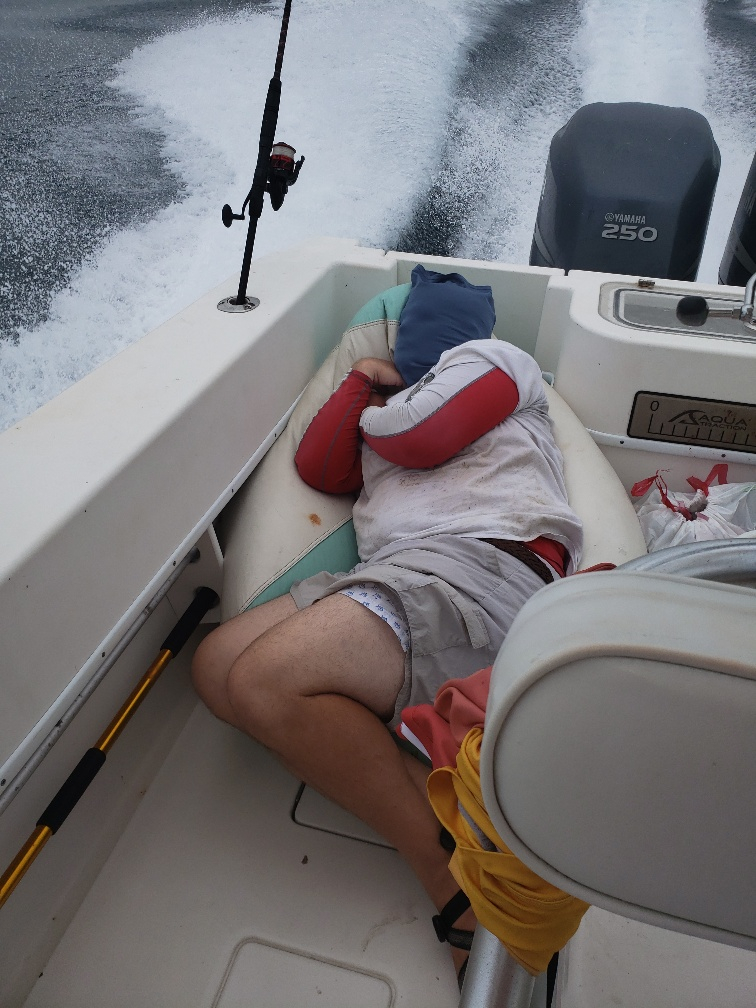 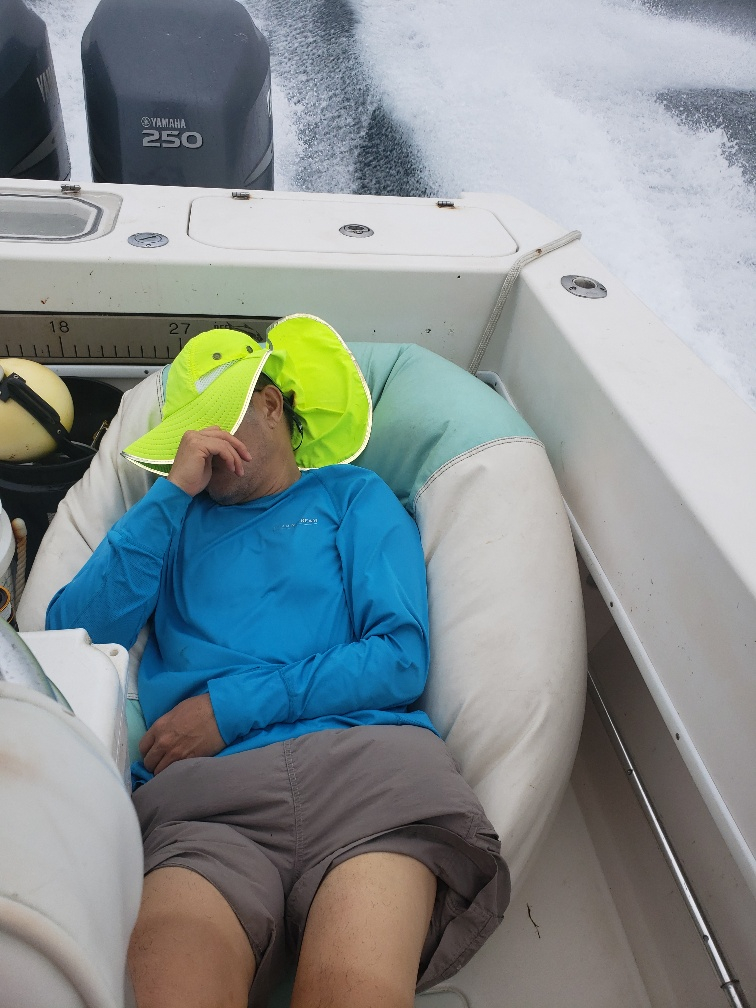 Got back to the dock and unloaded and had a pretty darn good day.  After my misadventures down south, it was good to get a day like this. 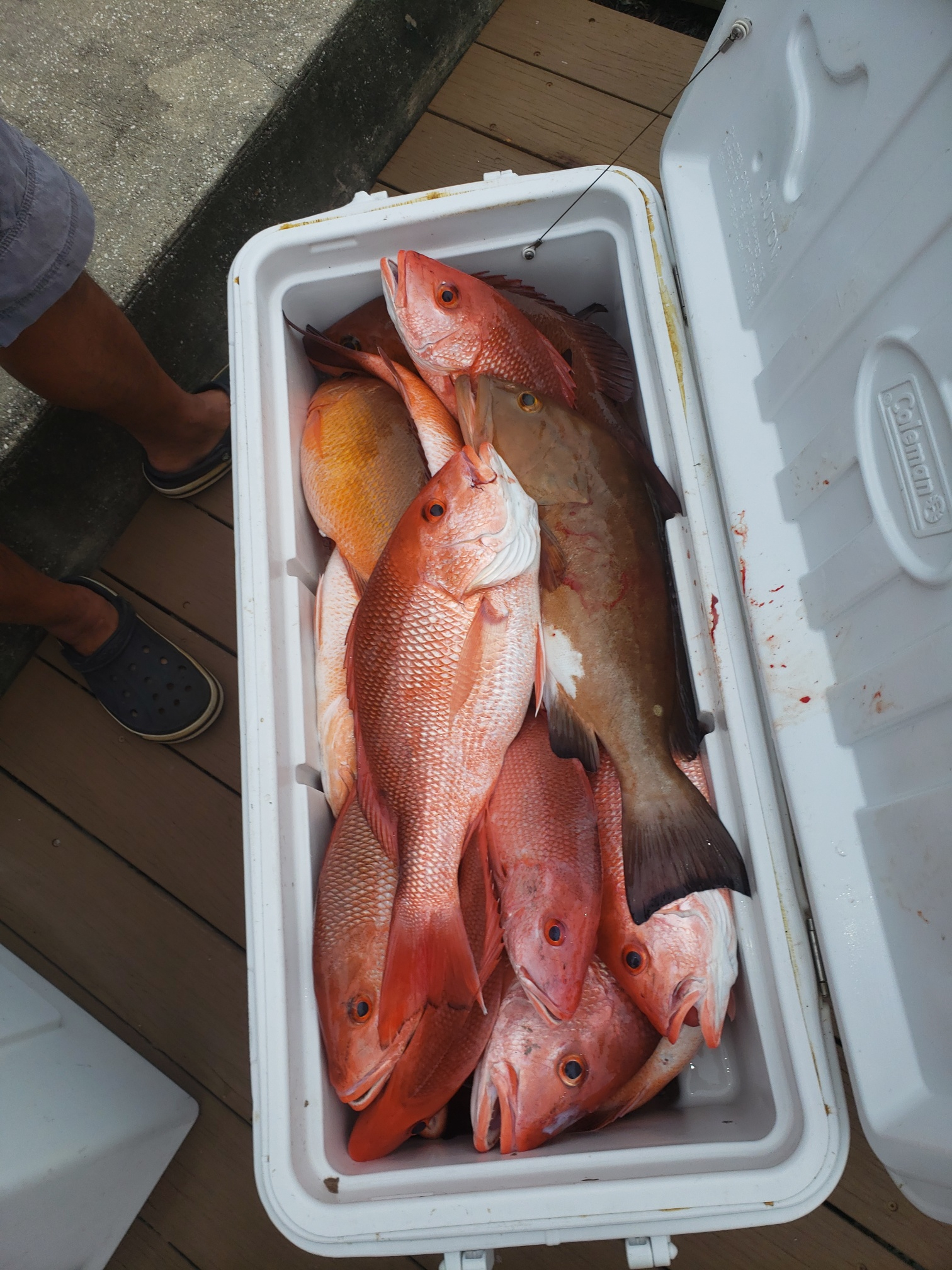 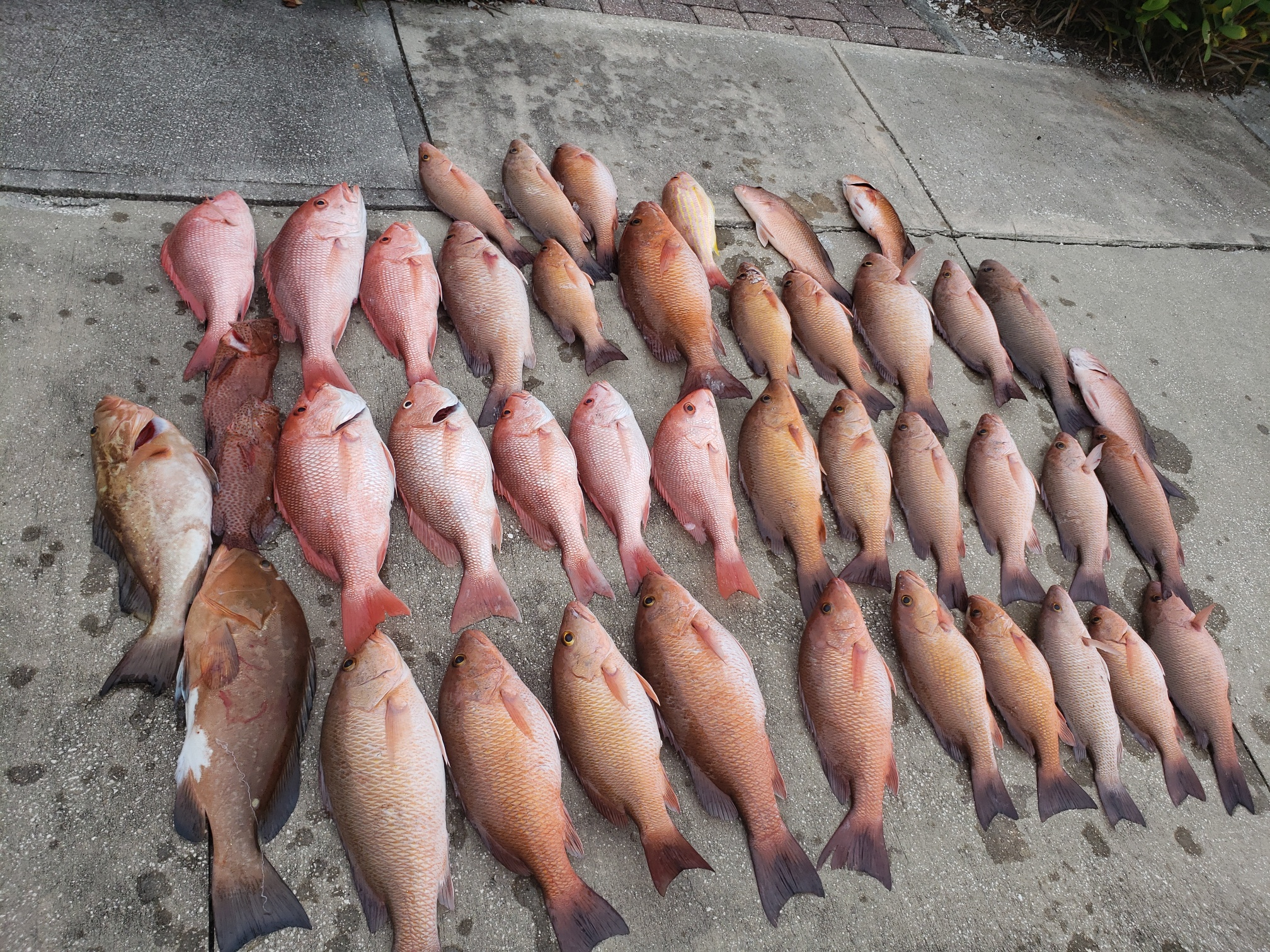 ARS, Red Grouper, Graysby grouper, Mangos, a Lane.  Mr Lam caught the biggest mango.  Will put a picture up when i get it.  It was a stud of a mango.  Didn't measure it but had to be pushing 25".

Epic day though and everyone ate well last night.

Tight lines...Got some other trips planned at least 2 of the next 3 weekends so not sure I will be able to get out before end of ARS but this was a good trip with or without the ARS component.  Was happy to see these spots weren't just covered in ARS.  Makes me more willing to run that far out again.
In Loving Memory of James Zielske, January 19, 1957-July 5, 2013
3 · Share on TwitterShare on Facebook