Ed Thompson and his family fished offshore with me on Tuesday morning, 2/11/20, 18 to 20 miles west of New Pass. The family used squid and cut-bait to catch and release five red grouper shorts to 18 inches, along with a bunch of blue runners and sand perch. They boxed four grunts and a porgy for dinner.

Roy Mittman and Richard Borghatti fished Estero Bay’s southern backwaters with me on Thursday, 2/13, where they used live shrimp to catch six keeper sheepshead to 18 inches. They released an 18-inch redfish and a crevalle jack.

Jeff and Beth Heimlich, with their son, Tanner, and daughter, Maddie, fished 30 miles west of New Pass with me on an offshore trip Friday, February 14th. The family used squid and cut-bait to catch and release thirty-four red grouper shorts to 18 inches, a gag grouper short, and two triggerfish at 15 and 16 inches. They boxed a nice mangrove snapper at 16 inches, along with four keeper lane snapper and three grunts. They also got a good look at a big tiger shark that ate our free-lined bait right down to the hook, before he cut off and swam away. 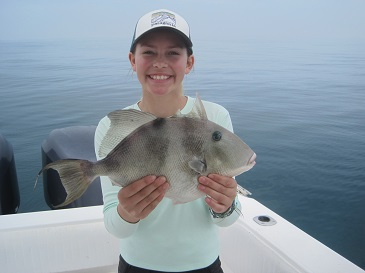 Joe Hahn, Mike Jansen, Mike Reichart, David Jahner, and George Vanderlinden braved five-foot seas heading offshore with me Saturday morning, 2/15. The forecast was for winds and seas to subside later in the morning, so they decided to tolerate the slow ride out and make a day of it. We fished in several spots 30 to 36 miles west of New Pass, using squid and cut-bait. Red grouper were everywhere but, as has been the case recently, they were all just undersized. We released over a hundred of those to 19 inches. The guys boxed eight nice porgies to 17 inches, a keeper yellowtail snapper at 13 inches, a keeper mangrove snapper at 13 inches, eight keeper lane snapper, and eight nice-sized grunts to 14 inches.

Drew VanWerden and his son, Gabe, fished 19 miles west of New Pass with me on Sunday morning, 2/16. It was a little choppy heading out again, but it calmed down shortly after we got anchored. The guys used squid and cut-bait to release a dozen red grouper shorts to 18 inches, along with five triggerfish to just short of 15 inches. Triggerfish are out of season until March so, even if they had met the 15-inch legal size, they would have had to have been released. Boxed fish included five grunts and a 14-inch mangrove snapper.

Mike Bochman and his friends, Jay and Kevin, fished 36 miles west of New Pass with me in calm seas on Monday, 2/17. Once again, the red grouper were everywhere, and the guys used squid and cut-bait to catch and release seventy-five of those to 19 inches. They also released a dozen scamp grouper shorts, all 14 and 15 inches, along with three 14-inch triggerfish and forty-eight bluefish. We also hooked and released an eight-foot sandbar shark, was kept things exciting for a while! As for food-fish, the guys boxed six porgies and two mangrove snapper, 13 and 14 inches.

Young angler, Jimmy Cox, had fun fishing a catch-and-release trip in southern Estero Bay’s backwaters with his dad, Pat, and his grandpa, Jim, on Wednesday morning, 2/19. The family used live shrimp to catch three keeper-sized sheepshead to 15 inches and a 17-inch pompano.

Mike Connealy and Rob Young fished 36 miles west of New Pass with me on Thursday, 2/20, on a slow tide. They boxed four 13-inch grunts and six nice porgies, and released four 14-inch triggerfish and a dozen red grouper shorts to 18 inches. They battled a goliath for a while, until it cut the line and broke off.

Paul Stanek, who fished with me earlier this month, fished southern Estero Bay’s backwaters, along with his brother, Rich, on Friday morning, 2/21. It was a windy day, with a cold front moving in, but the wind was blowing the right direction for a good tide, and the guys had a productive morning for their catch-and-release trip. Using live shrimp, they caught nine sheepshead, including two keeper-sized at 14 inches, along with a couple of mangrove snapper shorts, and three redfish to 19 inches.

Winds howled all week, and seas offshore were too rough to go out. Friday morning, 2/28, with winds still strong, and temps beginning in the forties, Mike Connealy, joined by friend, Bob Walz and Bob’s son, Bobby, fished southern Estero Bay’s backwaters with me, using live shrimp. The sheepshead were biting well, and we boxed seven of those that ranged from 13 inches to 17 inches, and released five shorts. We also released a short mangrove snapper and a puffer-fish.

Chuck Collins and his dad, Steve, were weathered out of a planned offshore trip last month, and rescheduled for Monday, 3/2. The winds were blowing hard, and seas were rough, but they opted to fish near-shore in the Gulf, rather than in the backwaters, since they had not fished offshore before. Using shrimp and squid at the near-shore reefs, the guys boxed ten Spanish mackerel between 22 and 24 inches, along with a lone grunt. They released a small gag grouper, a dozen crevalle jacks, and a dozen blue runners. 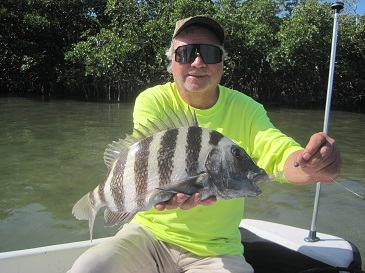