JCameronRSleep marathon flaPosts: 61 Deckhand
February 2020 in Keys General Fishing & The Outdoors #1
Well, as the name suggests, this was an exploration trip, an adventure into un-fished areas, right up there with the starship Enterprise. The adventure started precisely at three PM Friday.
A half an hour later, even from my bunk, I could feel the boat acting weird, like tilted a bit or zig zagging. Huh, Greg let Brizzo drive again, or maybe Lyndon? Nope, the engines are shut off now.
Tools are deployed, something about "auto pilot calibration" then vroom! Stop, vroom, stop, vroom . You get it. Well, eventually we are under way and the oars are put away. Whispers from above suggest a furry critter, soon to be extinct, chewed the wires just above the auto pilot. Within inches of the captain's feet and under the nose of super sniffer, leg licker and furry toy pulling Brizzo, second captain and mascot.
We anchored at Fort Jefferson for the night, waiting for a front to blow through. NO FISHING in park waters. Geeze! But the dolphins and ballyhoo put on a show for us, under the brilliant white light from the new led lighting on the YC. Mostly it was the dolphin show. They chased the ballyhoo, tossed them around until suddenly the little fish became a breakfast snack.
We left the Fort at noon, with a five hour drive to fishing.
Near sunset, the jig bite was on! Small muttons and a few big ones were hammering the jigs and bait, mostly jigs, great start. But the current felt like it was bouncing my lead and running weird. I got a couple muttons and napped at midnight, for sunrise and a day deep dropping.
Back fishing at three AM, I heard I had missed a bit of a bite when the moon rose and was able to pick up a few more fish before the move to deep water.
This trip was never promoted as a "fill your cooler" event, but my mission was to bring home at least enough to provide for our upcoming fish fry at the camp ground. We had enough for about a hundred already, and hoping to add another sixty people to the list. Hoping. But five muttons is not enough. Definitely feeling the pressure!
Ahhh, deep dropping, about 500-600 feet, three pounds of lead and lots of current. My recently repaired reel was not calibrated for depth, but the lead found bottom regardless. Soon I added a half dozen tile fish and a 7 or 8 pound snowy grouper to the cooler. We moved deeper and had to abort, due to current. Capt Greg got us deeper again, four pounds of lead, free spool, barely able to feel the bite, but two mid-twenty pound snowies came up and Vinny had a monster on! Amberjack and disappointment. Boom, he was on big again! Maybe a queen snapper? Nope, amberjack again.
I was in the lead-losing game. First a 3 pound wore through my tie-on loop, oops user error. Line not heavy enough. Upgrade to 4 pound lead, rocked up and lost. Then a 4 pound got eaten by some godforsaken monster the size of a house. Or did it actually eat my flashing light. Hmm the line, just above where my light used to be, was strangely severed.
Then Vinny was once again grinding a monster up. By this time he was convinced it was another jack and more out of sympathy than certainty, I suggested that it was a Queen snapper. And BOOM, there WAS a Queen snapper floating to the gaff! Prize of the trip. Close to 20 pounds. And the only picture I have of this trip, taken by Josh the mate. There was a baby queen caught later and a really nice one got mostly eaten, by a shark, on the way up.
Greg moved to about 500 feet and numerous yellow eye snappers, vermillions, a few yellow edge groupers and almaco jacks came up. I picked up a nice tile fish.
Sunset approaching, we moved to 220 feet. OK, time to seal the deal. A half dozen more muttons should provide for all the hungry campers, no problem. Dropping 16 oz lead, I barely felt bottom before it scooted away, wicked fast current! OK, try 24 oz. Sixty feet down, a barracuda inhaled it. Tie on another 24, spin the roulette wheel again. I could almost see the lead bouncing and rolling across bottom as I tried from above to let out line, to keep it on bottom. Many had given up trying to hold bottom with their bait and I joined them. As I was reeling in, a big bonito bit and became bait for a future trip. Others had big tuna on jigs, at least temporarily.
Greg announced a move and I shuffled toward the bow, where a tuna battle was occurring. The new lights let you see quite deep and it was painfully visible when the wriggling tuna lost it's tail to a vicious barracuda. Several met a similar fate, with up to a third of their hind quarters missing.
The next stop had similar current issues and I went to bed, a bit apprehensive of my catch.
The tuna bite apparently continued, but not much else.
At the dock, the catch was pretty evenly distributed. A haul of about 12 or 14 totes. Quite respectable considering it it was a learning expedition, just on the heels of a cold front, plus battling the Gulf of Mexico loop current (I think). Oh and monsters,  lots of sea monsters. Oh and a rat chewing the wires
The mates and chef were outstanding. I was awarded an honorable mention by smart **** Josh, for most improved in the line tangle division, after my shameful performance last trip. But maybe he improved too?
We are feeding 150 at the fish fry, Friday.
Good adventure Greg! 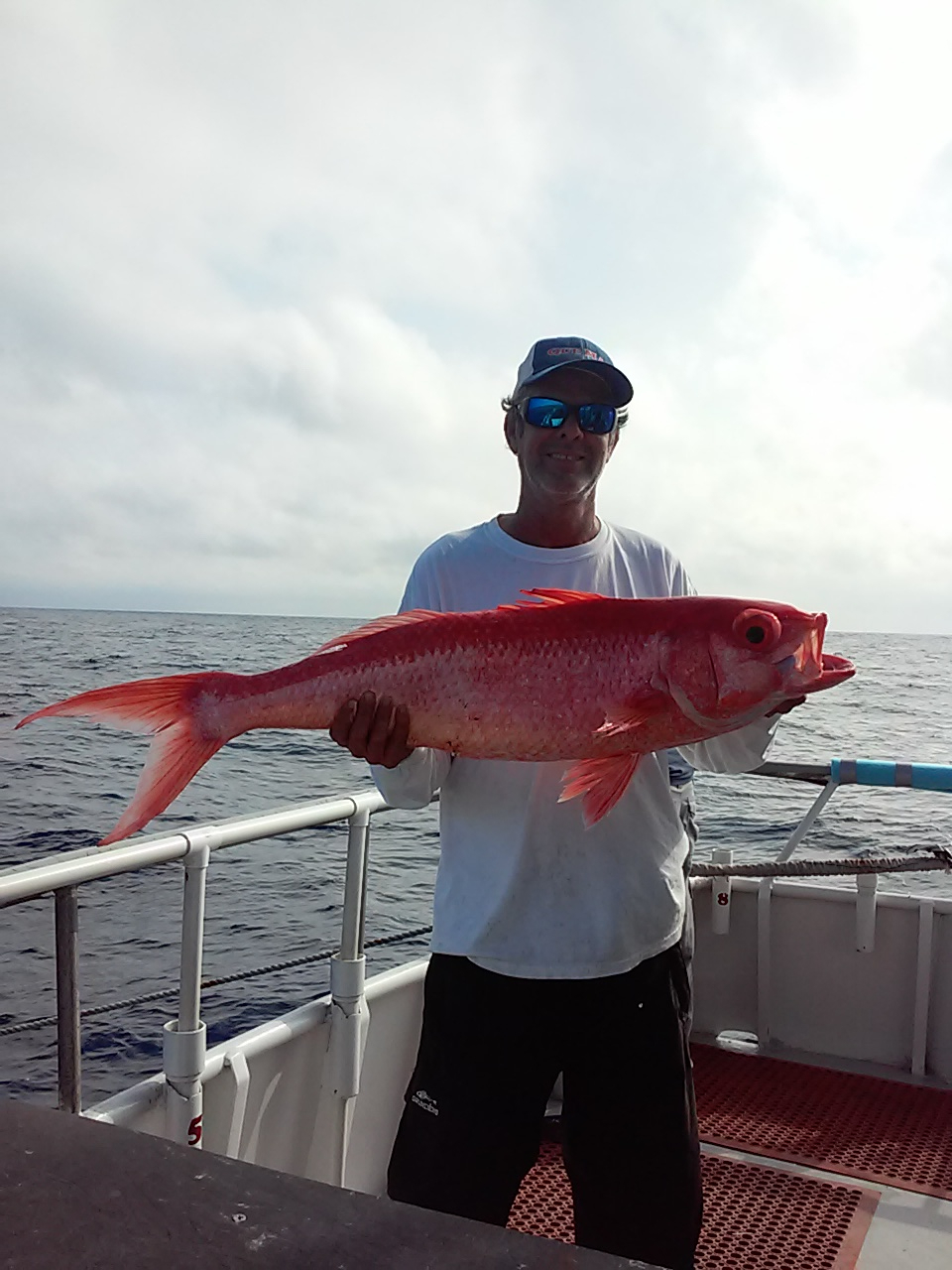