SWFL-Bonita Beach: Busy season here, and the fish are cooperating!

Saturday morning, 1/4/20, was a windy one, but the tide was good in Estero Bay’s backwaters, where I fished a catch & release trip with David Dunbar and his girlfriend, Emily Eiteljorg. The couple used live shrimp to catch a dozen sheepshead, four of which would have been keepers in the 13 to 14 inch range. They also released a crevalle jack, a 26-inch sail-cat, as well as two redfish at 17 inches and 19 inches.

We had a lot of wind, rough seas, and low tides, due to cold fronts, the week of 1/6/20, and I canceled a couple of offshore trips.

Long-time customer, Mike Connealy, fished spots 23 to 35 miles west of New Pass with me on Wednesday, 1/15, using squid and cut-bait. We released forty-one red grouper shorts to 18 inches, along with eight scamp grouper shorts, all of which were about 14 inches. Mangrove snapper were abundant, but the two dozen of those we caught were all around 11 to 11 ½ inches, short of the 12-inch keeper size. Mike boxed five 14-inch porgies and eleven keeper lane snapper that were all around 12 inches. He released six additional lanes that were shorts.

John Abernathy, joined by his son, Ryan, and by Becky Vogrin, fished southern Estero Bay’s backwaters with me on a very windy Saturday morning, 1/18. They used live shrimp to catch fourteen sheepshead, including four keepers between 13 and 15 inches. They released a 17-inch redfish and eight small snook.

High winds and seas and cold temps converged upon us the week of 1/20, and I had to cancel a couple of offshore trips. The winds and the cold even made it a little tough fishing Estero Bay’s backwaters, which I did on Wednesday, 1/22, with Tim Gustin and his son, Chase. But we had an incoming tide, which helped, and the guys used live shrimp to catch four keeper sheepshead, two at 13 inches and two that were between 15 and 16 inches. They released two redfish shorts to 18 inches and two small snook.

Seas finally calmed down enough by Friday, 1/24, to allow me to go offshore, where I fished in spots 28 to 35 miles west of New Pass with Tony Mengwasser and Mark Harrington. Using cut-bait and squid, the guys released twenty-five red grouper shorts to 19 inches, fourteen scamp grouper, all in the 14 to 15-inch range, two bluefish, two yellowtail snapper shorts and one mangrove snapper short. Keepers included a dozen lane snapper, a 13-inch mangrove snapper, and three porgies.

Winds and seas were on the rise again by Saturday morning, 1/25. I fished inshore, at the south end of Estero Bay, with Jim Pizzo and his daughter, Maria. They used live shrimp to catch thirteen sheepshead, including two keepers at 13 inches and 14 inches. The eleven shorts they released were mostly just under legal keeper size. They hooked a couple of redfish, but lost those before they could get them to the boat.  Maria also caught and released a 20-inch snook.

John and Holly Lischer, along with Cruz Holt, traded in their offshore plans for a morning of fishing southern Estero Bay’s backwaters on Friday, 1/31, since seas offshore were in excess of three feet. The group used live shrimp to catch seventeen sheepshead, including two keepers at 14 inches and nearly 17 inches. They also caught and released a 20-inch ladyfish, five mangrove snapper shorts, and a 16-inch snook.

Paul Stanek, joined by his sister, Rose, and her husband, Frank, fished a catch-and-release trip in southern Estero Bay with me on Wednesday, 2/5/20. They used live shrimp to catch eleven sheepshead and one small Spanish mackerel.

Mike Wickman and Tom Weinstein fished the southern end of Estero Bay’s backwaters with me on a very windy Friday morning, 2/7. The guys used live shrimp to catch ten sheepshead, including two keepers at 16 inches and 14 inches. They also released a 21-inch seatrout, due to the current moratorium on harvesting trout. 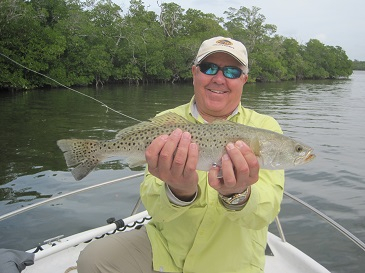 Ed Adamezyk and Brian Runevitch fished offshore with me on Monday, 2/10, in various spots out to 35 miles west of New Pass, using squid and cut-bait. We moved several times because of sharks intruding on our fishing spots, but the guys caught lot of fish. We lost count of the red groupers we released, but those numbered somewhere between 40 and 55, to 19 inches. The guys boxed five keeper lane snapper, all about 12 inches, one keeper mangrove snapper at 13 inches, three Spanish mackerel all around 20 inches, and one 14-inch porgy. They released five short mangs, along with one yellowtail short and a 25-inch bonito.