The day after Thanksgiving, 11/29, I fished the backwaters of southern Estero Bay with Dianne Hogler and her seventeen-year-old son, Ryan. They used live shrimp to catch twenty sheepshead, including four keepers that were all around 13 inches. They released four redfish to 17 inches and five snook to15 inches.

Long-time seasonal customers, Erwin and Millie Metusiak, fished the backwaters of southern Estero Bay with me on Wednesday, 12/4, using live shrimp for bait. The couple caught twenty-six sheepshead, including six keepers, all measuring around 13 inches. They released two snook to 25 inches.

Wednesday, 12/11, I fished 6 miles west of New Pass with Engle Merz and his sons, Matt and Max. The family used squid and cut-bait to catch and release thirty-one red grouper to 18 inches, an18-inch gag grouper, and two 15-inch scamp grouper. They boxed six keeper lane snapper to 12 inches, a keeper yellowtail snapper at 13 inches, ten porgies of mixed varieties that all measured 13 to 14 inches, and  a half dozen grunts, all around 14 inches. They released fifteen yellowtail snapper shorts and an equal number of mangrove snapper shorts.

Engle Merz and sons Max and Matt, who fished with me last Wednesday well offshore, decided to do a near-shore trip on Monday, 12/16, in search of  some Spanish mackerel. We fished in spots that were between three and five miles west of New Pass, using cut-bait and squid. The family caught three Spanish mackerel that were all around 22 inches. They released two 14-inch bluefish, and then they got into the real fun with sharks! They released nine blacktip sharks, all over 3-foot long, the largest measuring 43 inches (see photo below.) They also released two blacknose sharks, both over three foot long. 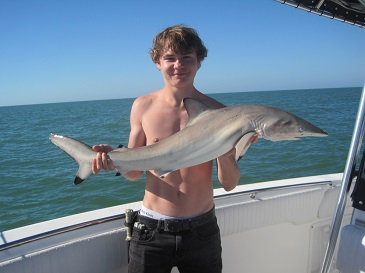 Dan Gregory and his young son, James, fished the backwaters of southern Estero Bay with me on a windy Wednesday morning, 12/19/19. Using live shrimp, the father-son team caught a dozen sheepshead, including three keepers at 14 inches, 15 inches, and 18 inches. James also caught and released a 24-inch barracuda, which was an unusual catch in the backwaters.

There were several days of high winds and seas as the Christmas holiday neared, and conditions weren’t too good for fishing anywhere. Mitchell Manz and family had to reschedule their gulf trip from 12/23 to 12/27, in order to get out fishing. Even on Friday, 12/27, it was still a little sloppy offshore, and we fished close-in at the reefs off Bonita Beach, using cut-bait and squid. It wasn’t as great day of fishing, but the family caught a few lanes and grunts, and released five small gag grouper, half-dozen crevalle jacks, and a bunch of squirrel-fish.

Dale Cruzan and his grandson and wife, Cody and Kate Cruzan, fished 19 miles west of New Pass with me on Saturday morning, 12/28, and used cut-bait and squid to catch a variety of fish. They caught fourteen lane snappers, including two keepers at 12 inches, along with a 13-inch keeper mangrove snapper, and a couple of grunts. They released two yellowtail snapper shorts and six triggerfish, the largest triggerfish being just a quarter-inch below legal keeper size at 14 ¾ inches. They also released twenty-one red grouper shorts to 18 inches. They got a bit of big-game experience when they hooked a big shark that they battled for 45 minutes on light tackle before it finally cut the line, before we could identify what kind it was.

Ian McKinnon and his family had planned to fish offshore on Tuesday, 12/31, but with strong winds and seas upwards of four feet in the gulf, he traded those plans for a morning of inshore fishing in southern Estero Bay’s backwaters. He, along with his daughter, Michelle Nichols, and her two children, Jack and Mark, used live shrimp to catch two redfish that would have been keepers, had it not been for the current moratorium on reds. Those measured 18 inches and 21 inches. Jack was very proud of the 19-inch seatrout he caught, but was disappointed to learn that also had to be released, due to the same moratorium. The family also caught a half-dozen sheepshead, including one that was keeper size.

Mark and Elizabeth Venturin and their daughter, Michelle Nichols, all of whom fished offshore with me on Monday, 12/30, fished the backwaters of Estero Bay with me on Thursday morning, 1/2/20 , joined by Michelle’s husband, Scott Nichols. The family used live shrimp to catch thirteen sheepshead, including three keepers to 17 inches. They also released two redfish at 17 inches and 21 inches, along with two mangrove snapper shorts.

Dale Cruzan, along with hsi son, Cody Cruzan and his wife, Kate, had fished offshore with me on 12/28/19. They wanted to try a backwater trip also, so we fished southern Estero Bay on Friday morning, 1/3/20, using live shrimp for bait. The family caught seventeen sheepshead, including nine keepers to 15 inches. They released two small snook.