Christmas on the Yankee Capts

Well, once again the jolly old group from Miami’s Tropical Anglers fishing club made the trek down to Key West to join Jolly Saint Greg on his now famous F/V Yankee Capts.  Greg had just got back from Ibiza so he had a great tan and was really relaxed. 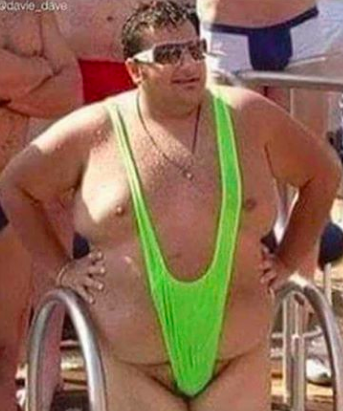 Tropical Anglers tries to do this trip on an annual basis and weather is usually the deciding factor as to whether we go or not.  Last year we got blown out and this year the extended forecast was pretty bleak but where there’s a will, there’s a way and mother nature changed her mind and delayed the impending cold front.

Oh but lets back up a week, it seems that a certain member of the Tropical Anglers was feeling a bit  brave and did what very few men have done before… he challenged Hammer to a “Biggest grouper on the dock” contest.  He did this in front of the whole fishing club and those of you that know me, know that I don’t back down to a fight or a challenge.. it’s just my personality.  To sweeten the deal, I said “Buzz, if you really want to put the hurting on me, why don’t we double the bet?”  This of course got our fellow club members egging him on and like a predictable man in his mid 70’s, he took the bait like an amberjack eats a blue runner. Now some would say “Hammer, C’mon, be nice” but remember, even older people have to be taught life lessons too;  The bet was on!

Greg asked us if we could leave earlier and none of us couldn’t change our busy schedules of watching “I love Lucy” reruns so we all met at 10am sharp and started loading the boat.  It was about this time that some of the guys that were invited must’ve not read the Yankee’s website as they showed up with nothing but their tackle.  Greg has recently changed the a/c unit downstairs and you can literally hang beef down there.  They had to run out and buy a pillow and a sleeping bag.  Brizo, Greg’s dog barked with anticipation as we motored by all the shrimp boats tied up to the dock.

We settled in and as usual, guys were rigging their rods with fresh leaders, hooks, jigs, and everything in between.  Russell had just returned from Thailand and had some silly looking things that they called “snapper lures”.  They should’ve called them “Alien Lures” because that’s exactly what they look like.  I didn’t want to hurt Russell’s feelings as he was seriously excited about making his own lures and catching something on them.  He was using everything from rubber skirts to dental floss to little Owner 1/0 hooks that had been snelled onto kevlar cord.  It probably took him 20 minutes to make each one. 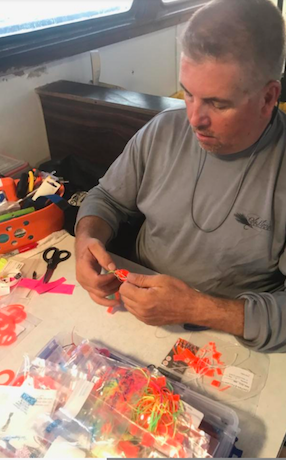 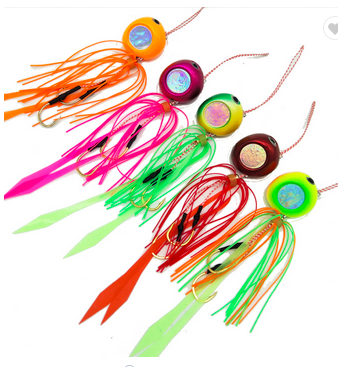 Now nobody is going to lie and tell you that the Yankee is fast but Greg had her parting the seas at a blistering 10.4 kts.  Periodically, a lobster line would meet its maker as the two big propellers did their job.

A navy plane decided to scare the living you know what out of us and screamed by us at 600 kts
literally just a couple hundred feet away.  It’s cool to see our tax dollars at work.

Chef Chad made us hot dogs, sausages and kielbasas which we quickly scarfed down.  It wasn’t indicative of his culinary skill but they hit the spot anyways.  We idled past the Marquesas and by nightfall, we were due south of the Dry Tortugas.  Greg”s plotter literally has thousands of marks in all directions from the Tortuga’s, so many that they literally black out part of his screen.  Considering I have a photographic memory, I now have them permanently imbedded in my brain.. If only I had the password to get into my brain..hmmm, maybe the Geek Squad could help me out?

Dinner was pork chops, salad and some veggies.  Chad knows me well enough by now that he doesn’t even put the veggies on my plate.  I ate my chunk of pork and decided to get some shut eye before we arrived at “Halfway Ledge”.

I must input the fact that we had some pretty good fishermen on the boat.  They weren’t much to look at but most of them had put their fair share of fish in fish boxes.  Buzz, the shutter salesman that challenged me is known to take pictures of other peoples fish and post them as his own.  Heck, two years back, we went to Guatemala and he about knocked someone into the water just to have his picture taken with a bull dolphin.  I was going to have to watch this old guy as I knew he’d be using all of his tricks that he had stuffed into his Depends to beat me.

When the boat finally slowed, I jumped out of my bunk, put my fishing boots on and headed toward the bow.  It was about midnight and the moon was full.  Dale, one of the Yankee’s regulars with 26 trips under his belt had already made his cast with his little noodle slow pitch rod.  While he played with small fish, I wanted nothing but a big grouper.  While there’s nothing wrong with catching mutton snapper, I had to beat Buzz!  I’d brought along some fresh mackerel and 3 bags of octopus.. black groupers can’t resist an octopus and I knew Buzz didn’t have the connections to even obtain them.

To put it mildly, fishing stunk and I wasn’t about to stay up all night to see if it got any better.  I once again headed to my bunk down in the gallows below deck.  I’ve slept in morgues that were warmer.  Thank God I brought a good sleeping bag and my pillow because it didn’t take long for me to fall asleep.  At 5am, Dale said “Hey Hammer, the bite is going pretty good”.  Like most sleeping people, I decided to stay in my cozy bunk and not get up.  That ended up being a mistake because the guys that stayed up flat out spanked the mutton snapper.. all on bait.  The jiggers on the bow caught a few but there really wasn’t too much of a comparison.  At night, fish feed by smell and the guy that did the best had finger mullet that he’d butterflied out.

In the morning, I once again donned by fishing attire and made my way out only to see people fighting fish.. in the daylight.. I’d slept in.. grrr.
I went to the bow and grabbed my jigging rod that I had a 6 oz. buck tail rigged up to.  I cut an octopus in half and sent it down to the bottom some 220’ below.  It wasn’t down there 2 minutes when I felt it get eaten.  The bait was directly below the boat, I had it on my heaviest rod with the heaviest braid.  I reeled down and stuck the fish with a sharp jolt upward.  The reaction was instantaneous.  The fish made a few fast runs, then stopped.  There was nothing I could do except hold on.  I knew the fish had rocked me up and there’s no red grouper that could do what this fish just did.  I “twanged” the line trying to irritate the fish and then I put the reel in free spool.  I was trying to make the grouper think that he’d got rid of the stinging sensation in his mouth.  To make a long story short, I ended up breaking the fish off as I couldn’t expect Greg to circle back around to let me work the fish any longer than I already had.  I’m sure Buzz was relieved.