JCameronRSleep marathon flaPosts: 61 Deckhand
December 2019 in Keys General Fishing & The Outdoors #1
Ok, so lots of pictures this time. I've finally learned to pass my phone to the mates and let them capture the moment. Overall, a very good trip, great weather, food and friends. And the guests of honor were willing to come on board and cool off.
Capt Greg rounded up the troops to depart to Halfway Ledge, three hours early on Thursday. Wow! Bonus time! We were fishing by almost thinking about breakfast time, just a few minutes after my third cup of coffee.
I was ready. Several baits prepped, new leader and hook and the same rod and reel that landed me a nice cubera snapper only a few days ago on the YC. Capt said drop em, so down she went, fluttering ballyhoo to the bottom. Almost. Just as I expected a thud of lead on bottom, a hidden tangle on my spool appeared, halting my fishing fix. What a mess. In my haste to beat the cubera last week, the line bunched up on one side of my spool and now flipped over, trapping the outgoing line. Tony (mate) and I worked to free it, but a huge hit from a grouper ended that plan. The line snapped at the spool and Ironically unsnarled the mess at the same time.
Well, my backup gear worked well, as by sunrise I had several keepers in the box and not long afterwards this beauty surrendered to my ballyhoo. My first gag grouper that I could keep, 23 pounds. 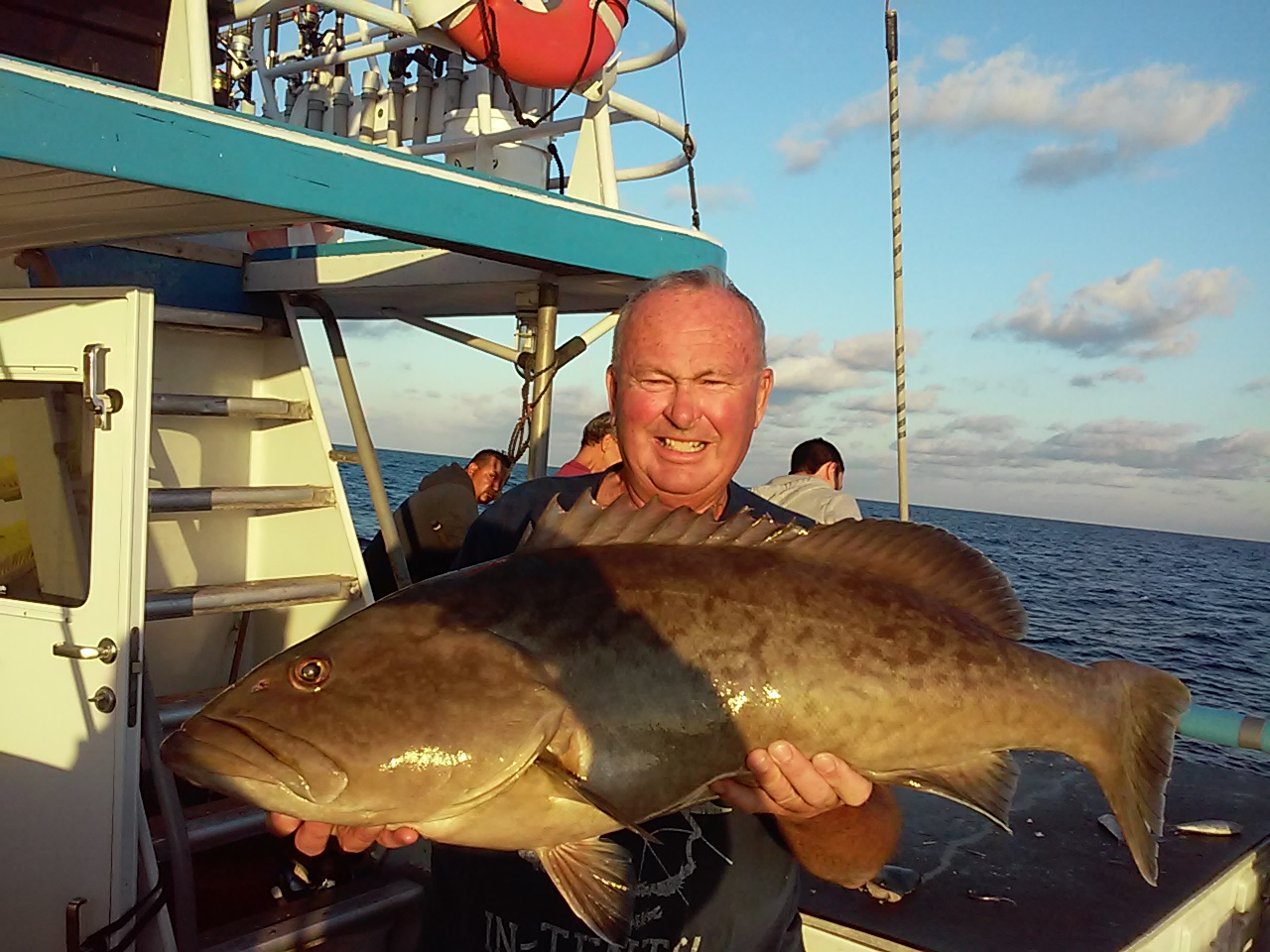 Most of the fishermen were repeat customers this trip, lots of familiar faces. Some I hadn't seen for 6 or 7 years. Lots of good memories and new ones being made. Father at the rail behind, son holding a tasty prize. 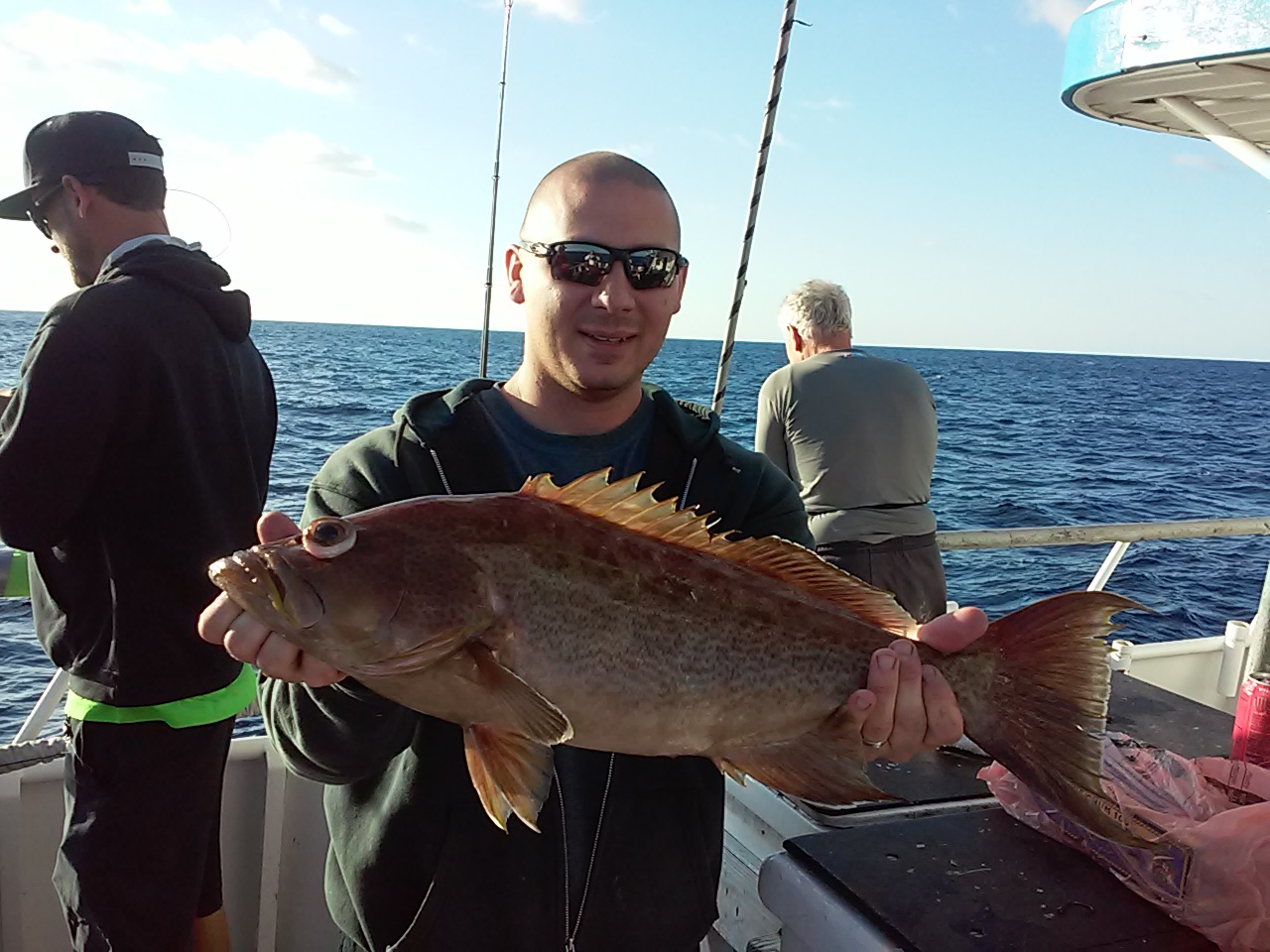 Chad the chef on a smoke break photo bombing my Kitty Mitchell grouper. First one I've ever caught. It was a really different fight and a surprise to see. 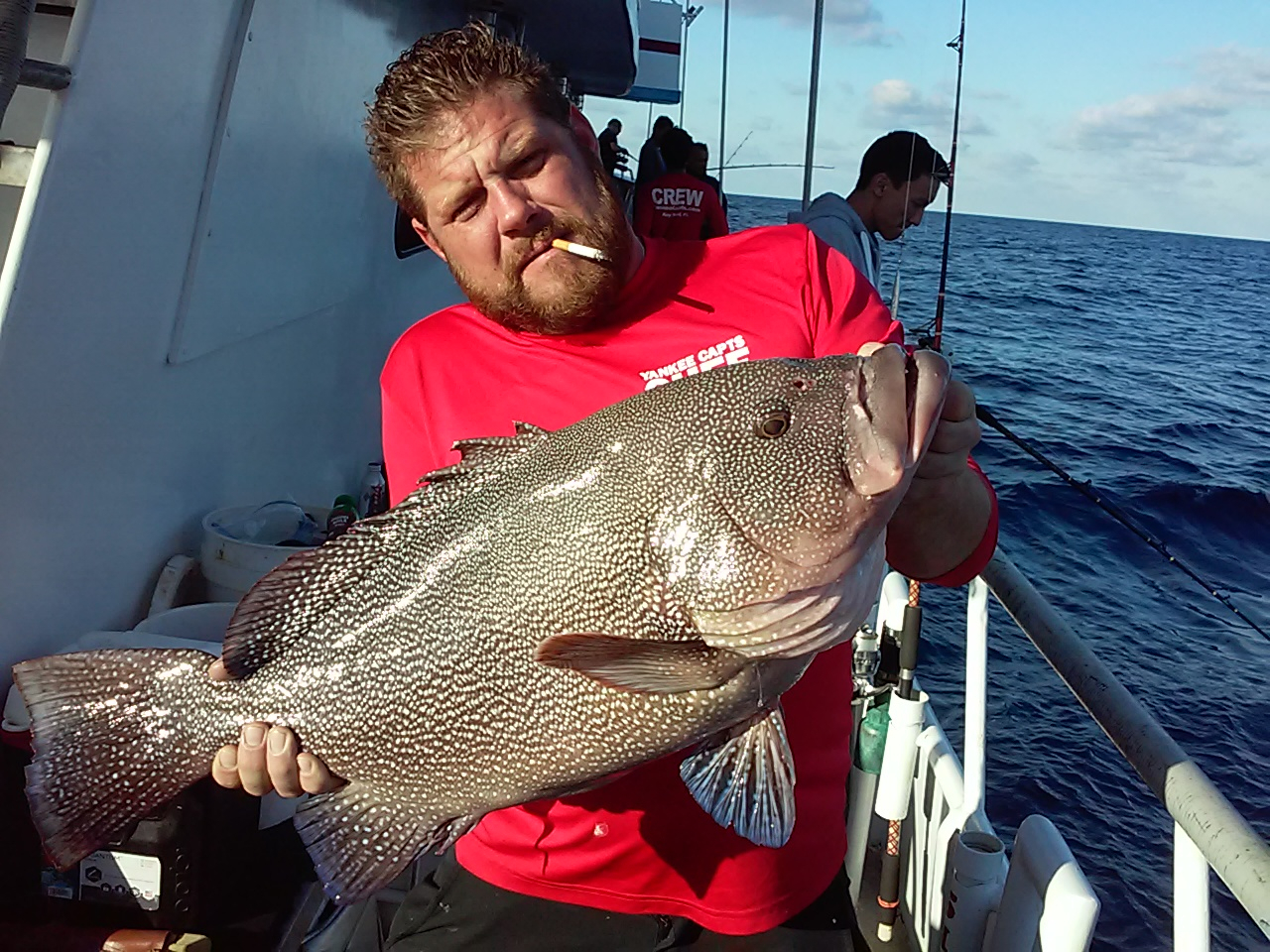 Kitty is on the menu tonight. We split it five ways at the cleaning table, so there will be a variety of opinions about taste and texture. It looks really good. Don't disappoint me Kitty. 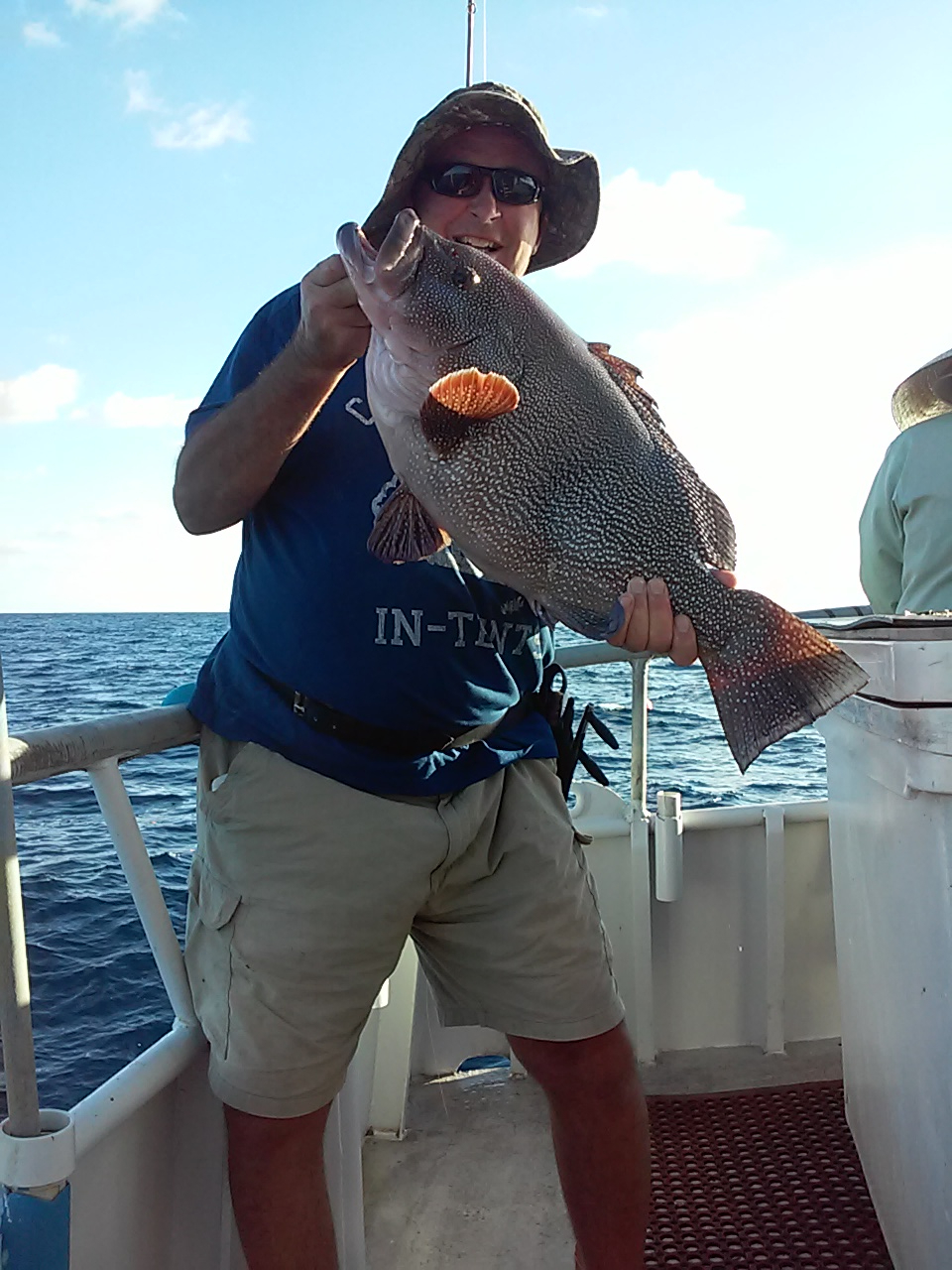 Not long after, Jarvis got word that he needed to step up his game and brought in this sweet gag, at about 25 pounds. He has always been super helpful to me and always shares his knowledge and tips. It is fascinating to watch him change his tactics when the bite cools off. I want to be just like him if I ever grow up!
Later in the trip, Jarvis was throwing a silver jig and caught a sand tile fish. He shook it off, cast again and hooked another one. He reeled in a few feet and as he was shaking his rod, trying to dislodge the tile near bottom, a huge red grouper struck and joined the party in the fish cooler. 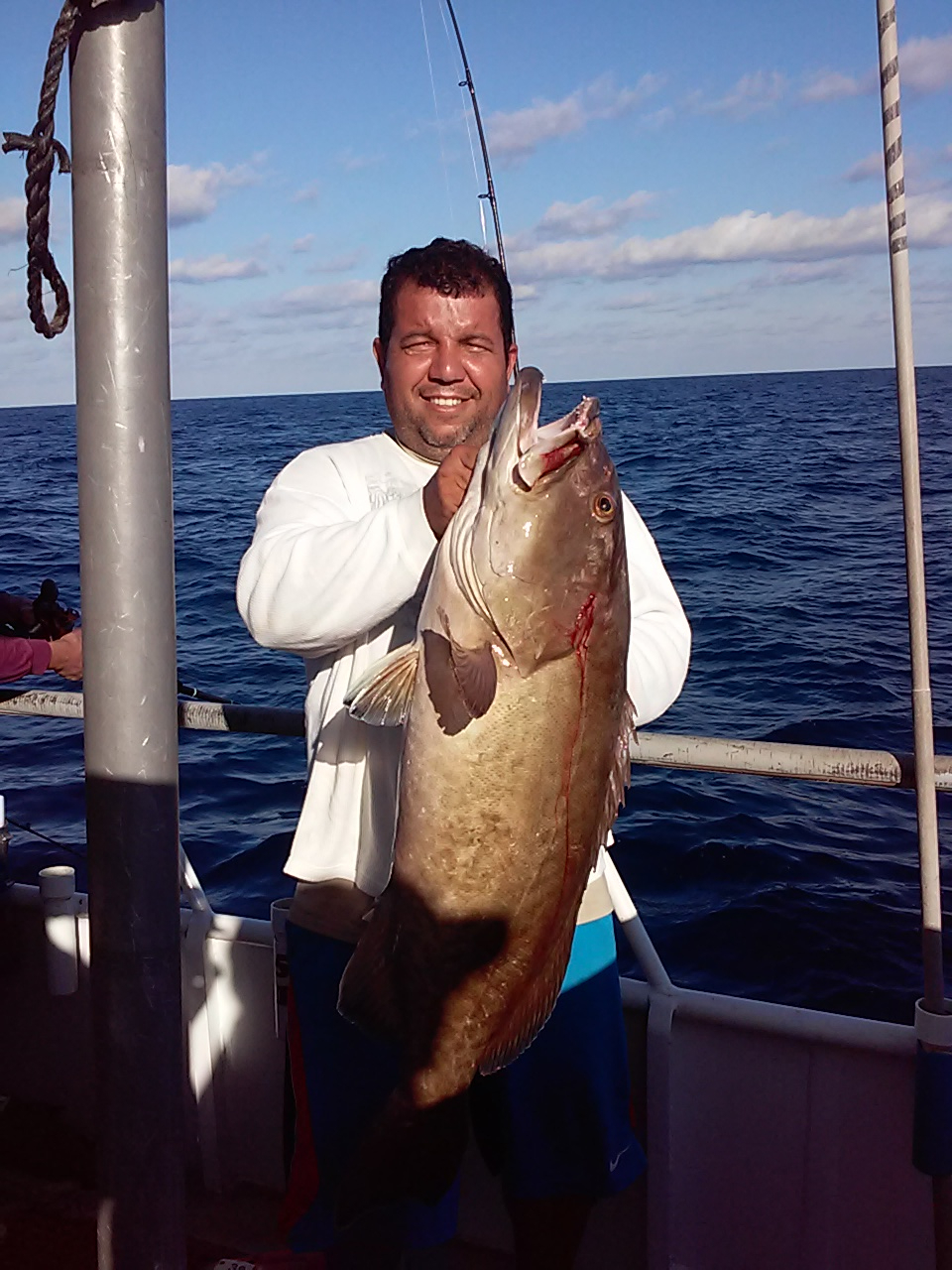 Hilton is a man of few words, but his friendly smile speaks well of him. I was fishing near him several years ago when he caught his first black grouper and won the pool. He smiled a lot that day! 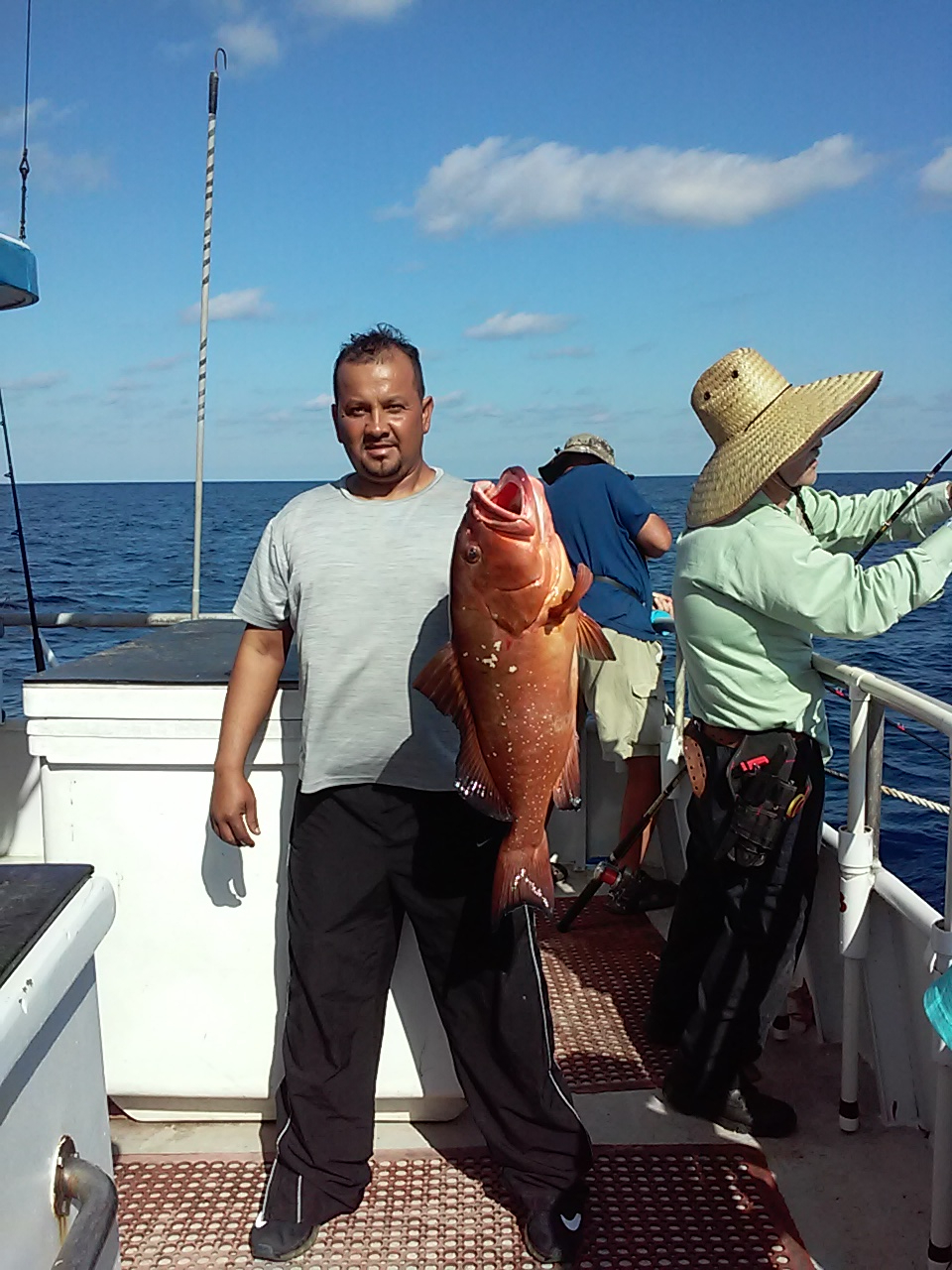 This large hambone snapper is in very good hands. Even doctors like to fish and she kept the guys on their game! 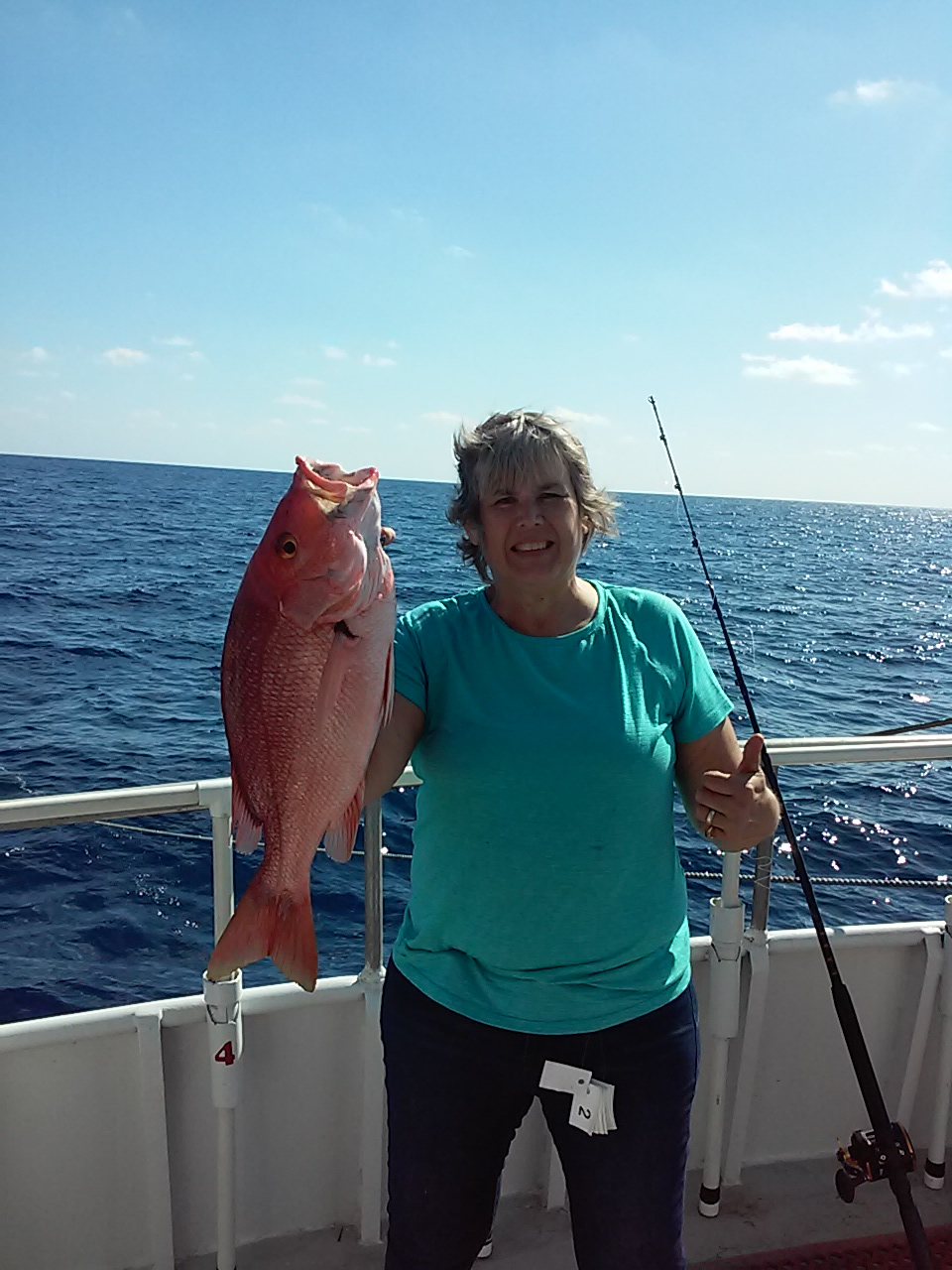 A nice mutton for the fish fry. I only needed a few more fish for the Xmas eve fry, but after this trip, there will be some in the freezer for the big fry in Feb. Geeze, we kind of have the same expression on our face. Is he mocking me? Get in the cooler, mutton! 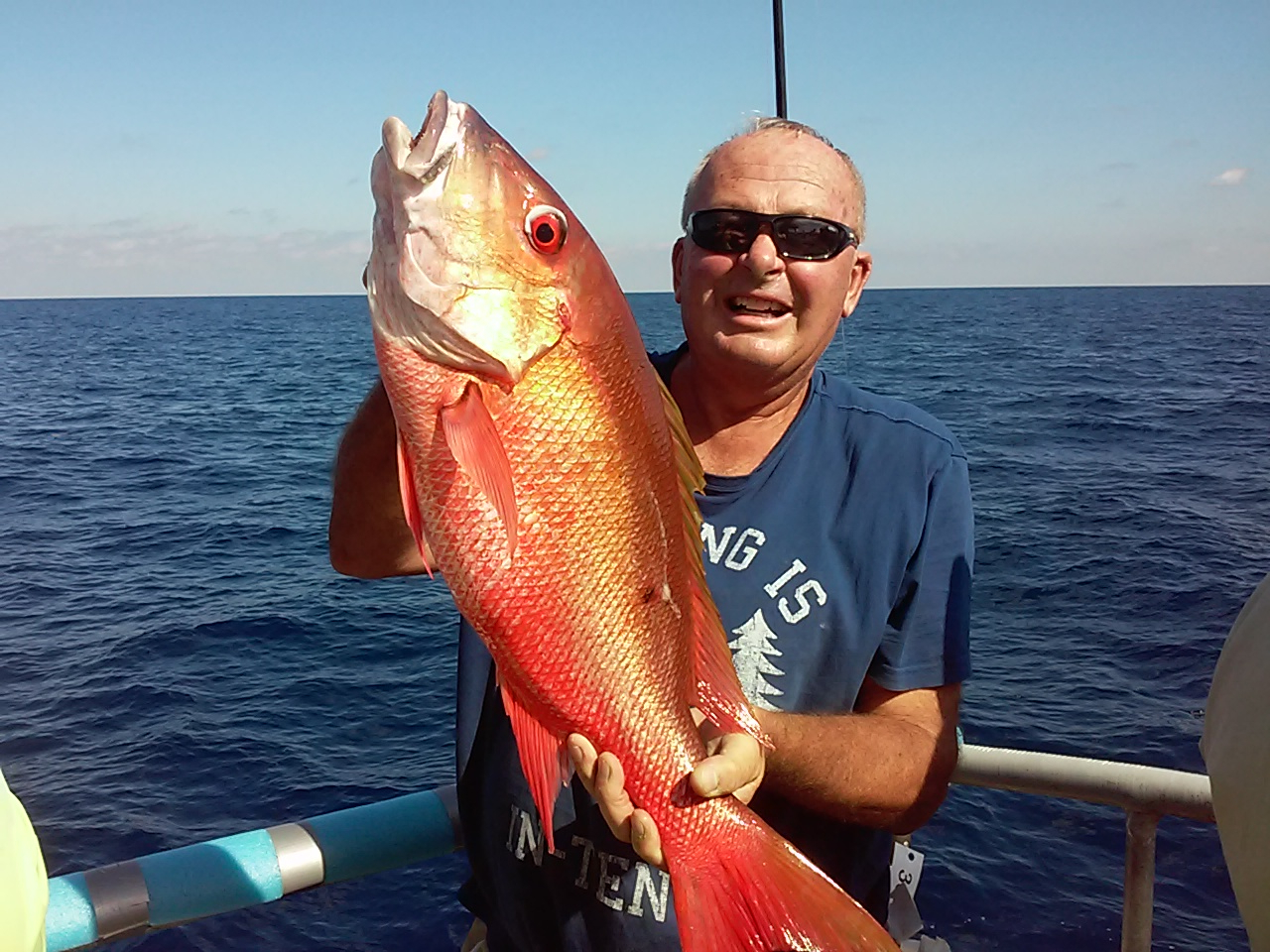 See, even ladies can land big groupers! But is it big enough to win the pool? Her face says yes, but the scale might disagree.... 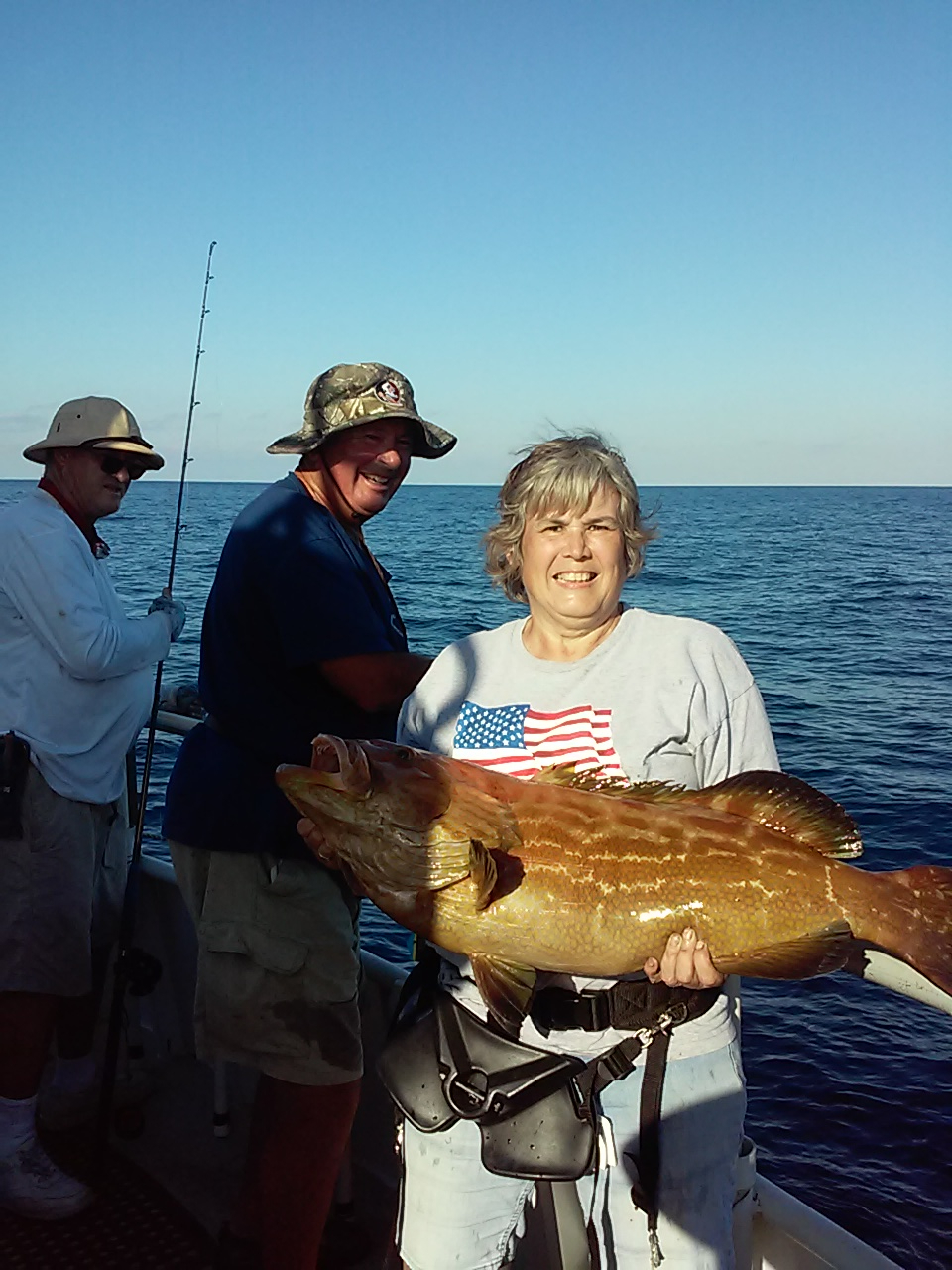 This is a beautiful queen trigger fish (successfully released) and a whole school of photo bombers. 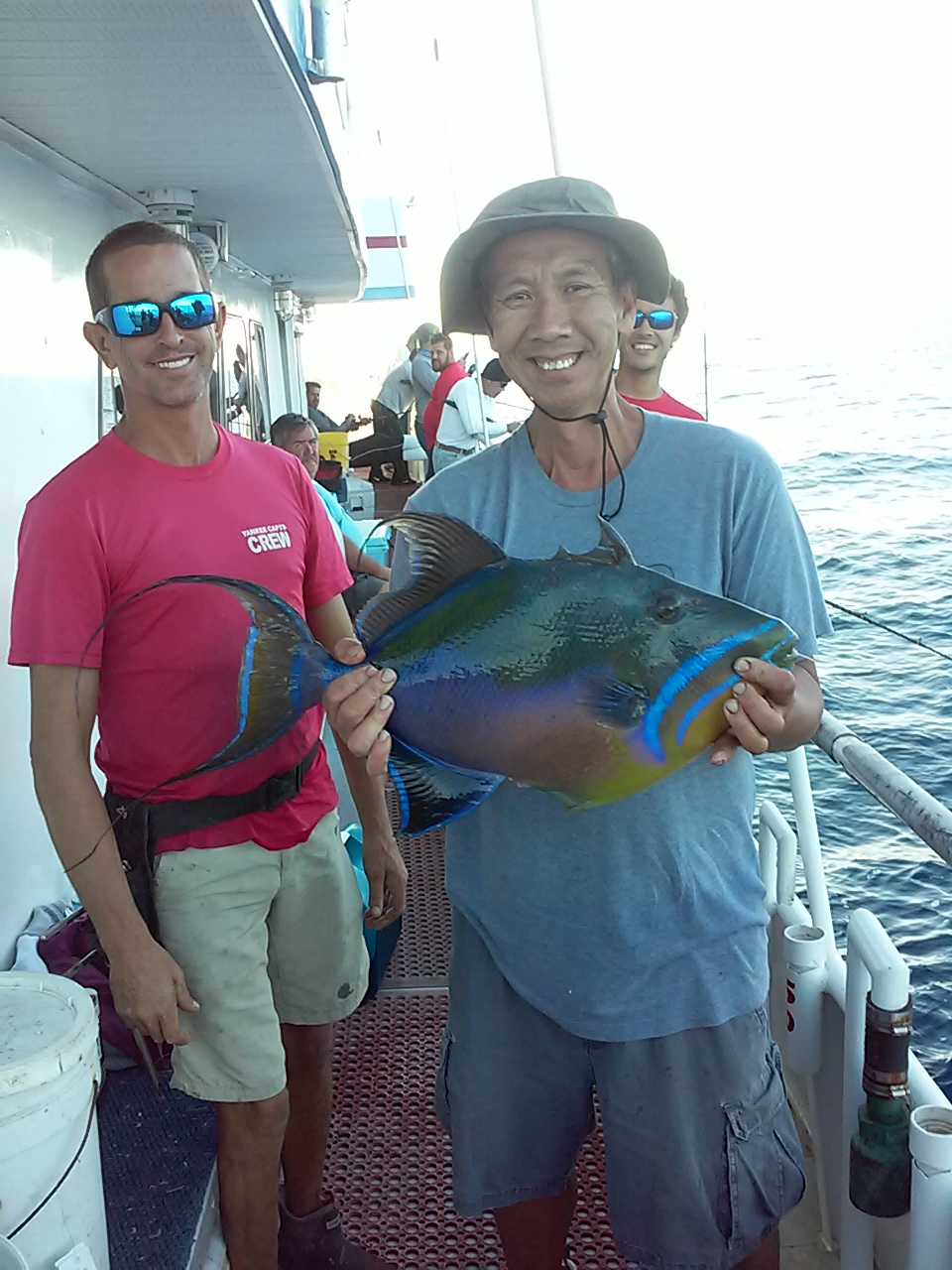 Dad can land the big ones too. They catch pin fish on the way to Key West and have had good success with them over the years. 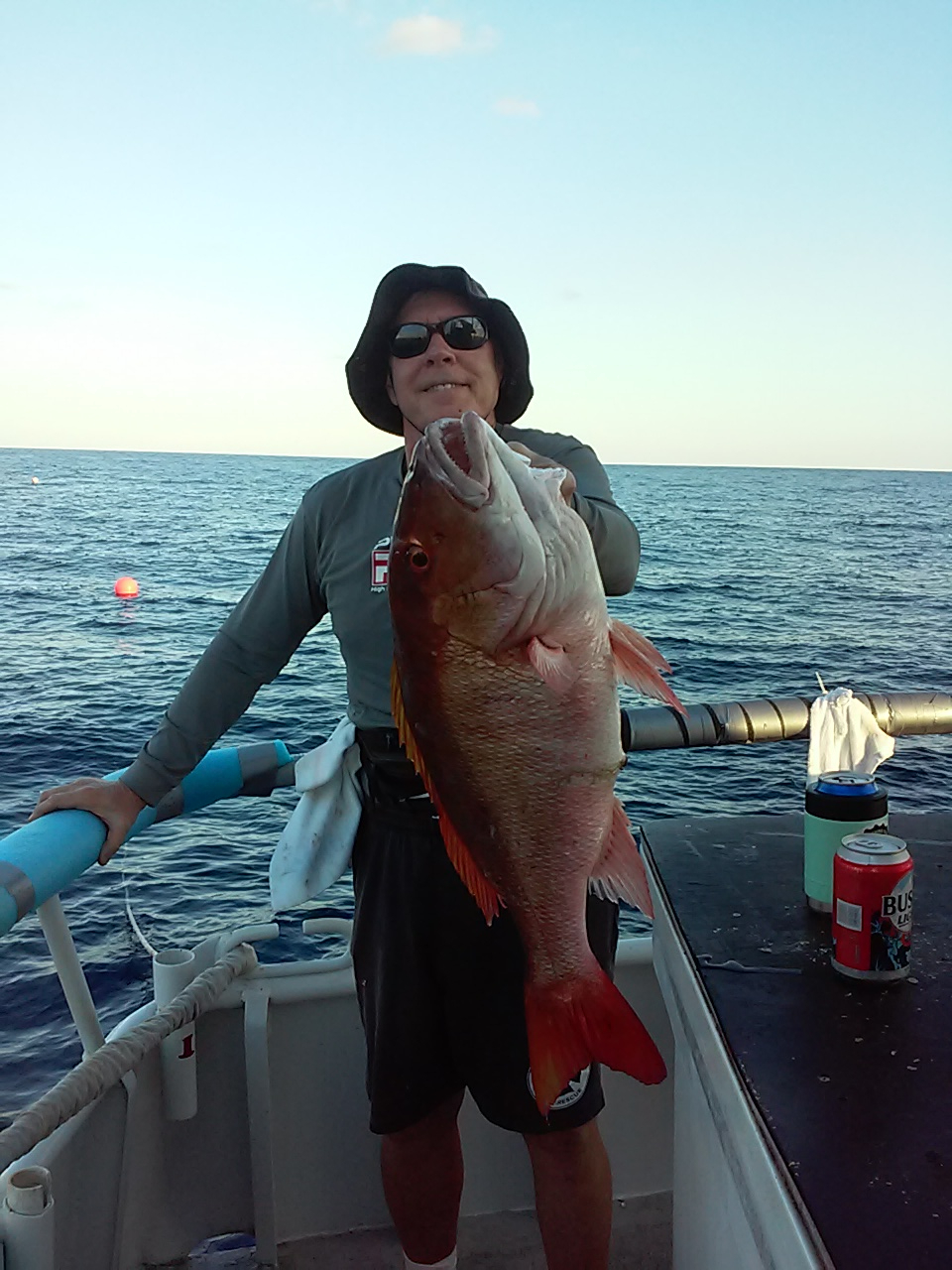