Bassin Assassin Posts: 1,317 Officer
November 2019 edited November 2019 in West Central General Fishing & The Outdoors #1
Hit the Alafia Tuesday and today. Will give you Tuesday's report first. Launched around noon. Water temp was 69-71 degrees and stained. Was working the 4" RT mullet in smoke on my docking rod and reel, a Mojo Inshore Heavy power paired with a Cabo 40 and spooled with 30# test and 50# leader. This is a great set-up for pulling monsters out from under docks. Lost a dink on my first dock. On down river to a good stretch of docks. Skipped under a dock around 12:25pm and got smashed. Set the hook on a bit of weight and up comes a decent snook. After a pretty good fight, got her to the boat. She came in at 28 1/2". 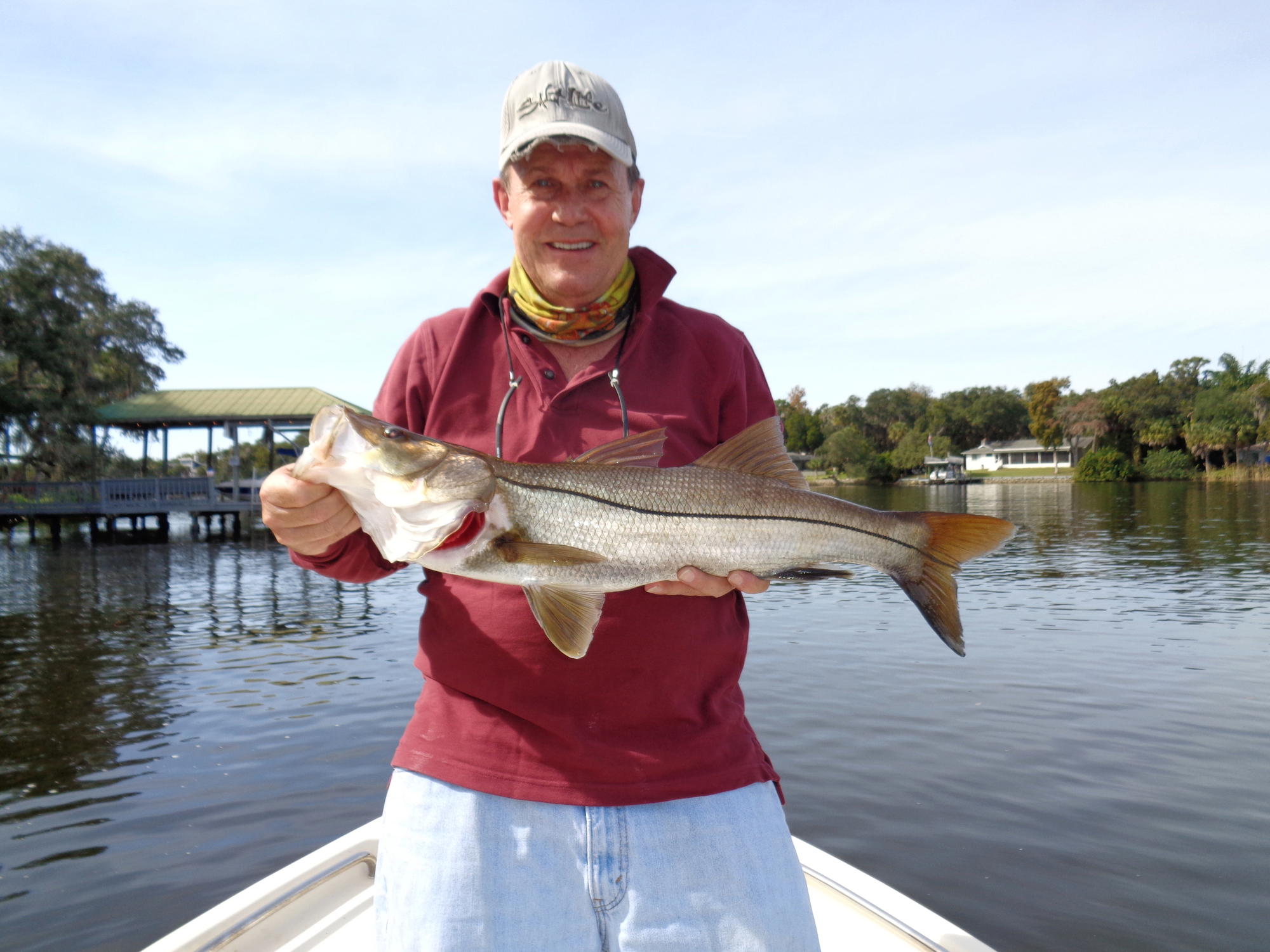 A dink under a dock at 12:42pm. Vicious strike though. Another dink at 1:18pm. Down to a spot that has paid off with big snook in the past. Skipped under the dock at 1:35pm in about 18" of water. Bringing it through and got crushed. Set the hook and up comes another decent snook. After a couple of jumps, I got her to the boat. She came in at 27". Not too bad. Picked up a 23 1/2" snook at 1:58pm under a dock in this same cove. Up to another small bay and caught about a 20"er under a dock at 2:33pm. Another move to a finger near 41. Only got a dink under a dock at 3:08pm. Not cold enough in there so back out and up river. Over the next couple of hours I only caught 2 dink snook, 2 rat reds, but I did get rewarded with a 23" red that hammered my bait. I headed for the ramp. Pretty decent day being that it was the New Moon. Incoming was definitely better than the outgoing.
Final Body Count
Snook - 9 (28 1/2", 27 ", 23 1/2", 20" and 5 dinks)
Reds - 3 (23" and 2 rats)
Launched at 1pm today. Water temp was 70-72 degrees. Caught a dink snook on my first dock at 1:13pm. Another dink at 1:22pm under the next dock. Down to a set that I didn't work Tuesday, Hooked into a decent snook under 2 consecutive docks, but they came unbuttoned. Down to another set of docks not worked Tuesday. Working along and nothing really happening. Skipped up under a promising dock at 2:30pm. Reeling it in and just as it clears the end of the dock, my bait gets destroyed. Set the hook and the water erupts. The mouth of a very large snook surfaces and she violently shakes her head. It is a monster and she is pissed. She takes off for deeper water and my drag is tested quickly. She makes an attempt to get airborne, but only gets half her body out of the water. She comes back towards the boat and then surges for the dock. I am able to keep her clear, but not by much. Again she comes out and I turn on the trolling motor to follow her. I loosen my drag a bit. She makes multiple runs, circles the boat and then goes towards the back of the boat. Off the seat now and following her. Back to the front and she is on the surface now. I put a little pressure on her to turn her head and get her coming to me. I get the net ready. She is close. Another surge and she turns towards me again. I reach out with the net and could only get about half her body in. I drop the rod and and grab the net with both hands to get her completely in. She is a freaking TANK. She comes in at 41" and weighs 27 pounds. After a quick couple of pics, I lower her into the water. She shakes her head angrily and chomps down on my finger when I release the Boga. After about a minute she lets go and swims on the surface. She drops out of sight and back into the murky depths of the Alafia. This is my 4th snook over 40", but she has to be the heaviest one yet. What an adrenaline rush. I am spent. 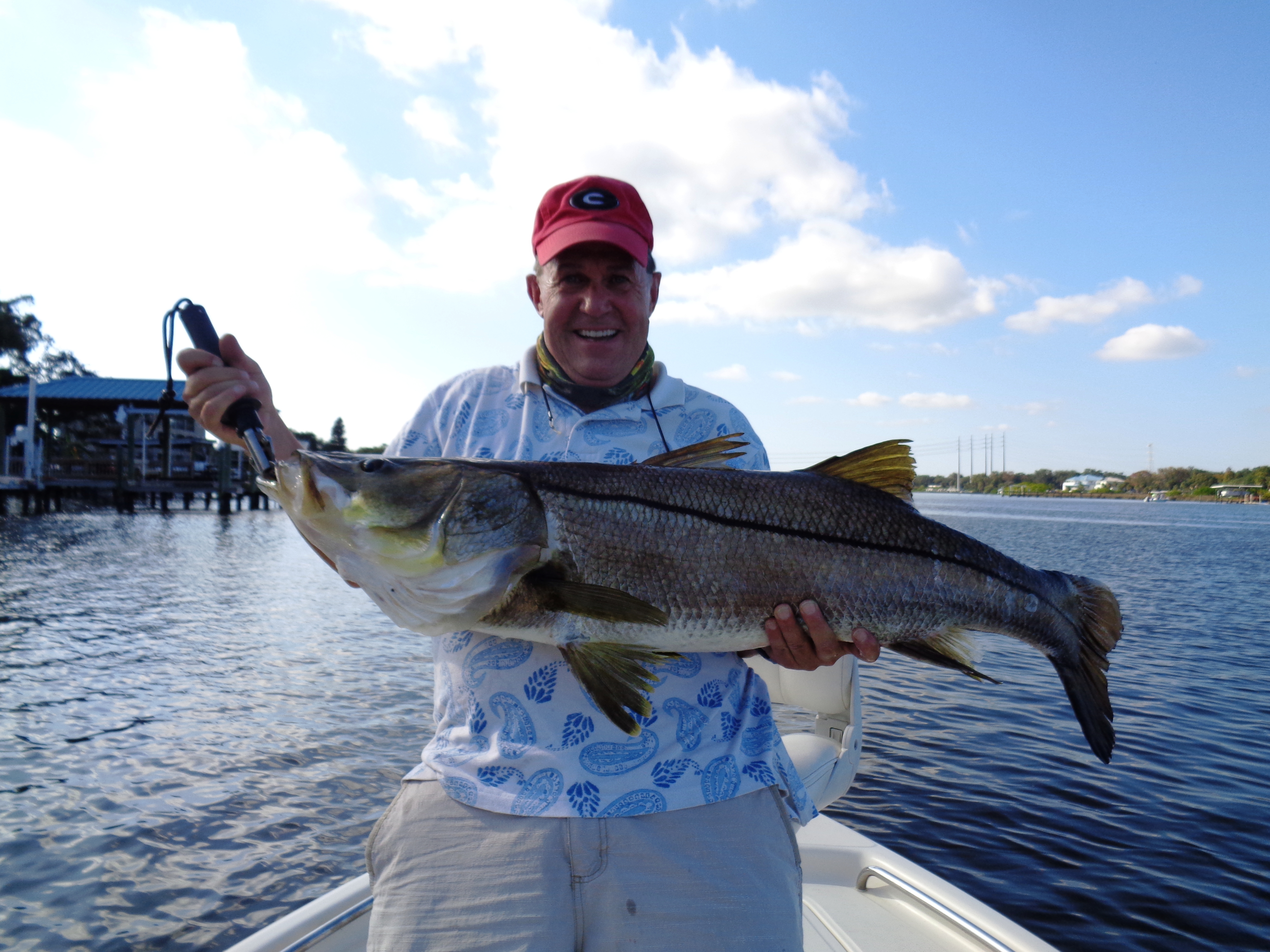 I didn't catch another fish until 3:32pm...a little dink snook. Over to another set of docks. A 10-spotted rat red at 3:42pm. Three minutes later another dink snook. Off to another set and caught a min-rat red at 4:18pm. Eight minutes later another rat under a dock. My last fish was a dink snook at 4:52pm. I worked it till near dark, but no more fish caught. Most of the day was famine, but I did feast on one very fine snook. Go Dawgs!
Final Body Count
Snook - 5 (41" and 4 dinks)
Reds - 3 (Rats)
Improve Our Fishery - Practice Catch and Release
0 · Share on TwitterShare on Facebook