bgeorge Plant City FLPosts: 1,652 Captain
October 2019 in General Hunting #1
Well this is another year where gator season is messing with my deer hunting.  One year I am going to have to say no to some and go focus on a few deer.

Well last night I took out the Pharmacy director and his daughter out to fill his tags.  Both first time hunters.  He was set on getting some boots made and to give her a good experience before she was off to college at FSU.  Target was 8.5-9.5 for the boots.  Was feeling pretty good not just having to hunt big.

Started to chase one that met the slot but he gave us the slip.  Started to slip into an area where one really had its way with us earlier in the year.  It had run thru a bunch of cypress and under logs.  It finally managed to transfer the hook to a log after about 80 yards. #!#@% None the less we saw one go down and it started to move off once the boat was right on top of him.  I got one hook in and then we managed to get a few more.  A good harpoon job and then a dart from her with the spear gun I was finally able to relax a bit.  She put it down with the bangstick as I was not looking to be out late.  Turns out this one was above slot but we would look a bit more.

Got back into the lake and saw one where the odds were going to be stacked against us.  By the time I could adjust the trim to get the boat on plane and get there it had gone down and left little sign.  House wins.  Started to move back to where the calm water was and saw a wake running for the weeds and trees.  Told everyone to hold on and I circled to get in front.  Got the boat between the thick and him just in the nick of time.  He popped up and gave the boat a quick look at about 20 feet.  Circled back out thru stumps to open and we got a hook on him.  He circled hard and wide and back to the woods.  He felt confident or something and poped up 5 yards before the thick stuff and we put two more hooks up by the front shoulders.  Then he went under the mat of weeds.  We managed to keep him from going to deep and got the boat wedged in a stump that allowed us to get some leverage on the gator .  We pulled him back a good ways and then it was not coming any more.  We worked our way over and found he was all tangled up in a dead tree  I started to work to remove limbs but had not put a saw in the new boat.  We were not going to be able to cut our way to him so we started to feel around with a harpoon and felt like he was down there but new person did not feel confident enough to drive harpoon sight unseen.  While reaching down and lifting up sticks and at one point I pulled up the gator. His head broke the surface and the newbie drove the dart 4 inches deep in the neck.  One more for good measure and a quick bangstick took the fight out of him.  We pulled he boat out dragging the gator to a bit more open water.  Managed to get him rolled in and tagged.  Two done before dark and put the boat back on the trailer.  Got away from the ramp as the bugs were claiming the area.

Little big for boots but I am sure I can get a few hides for him. 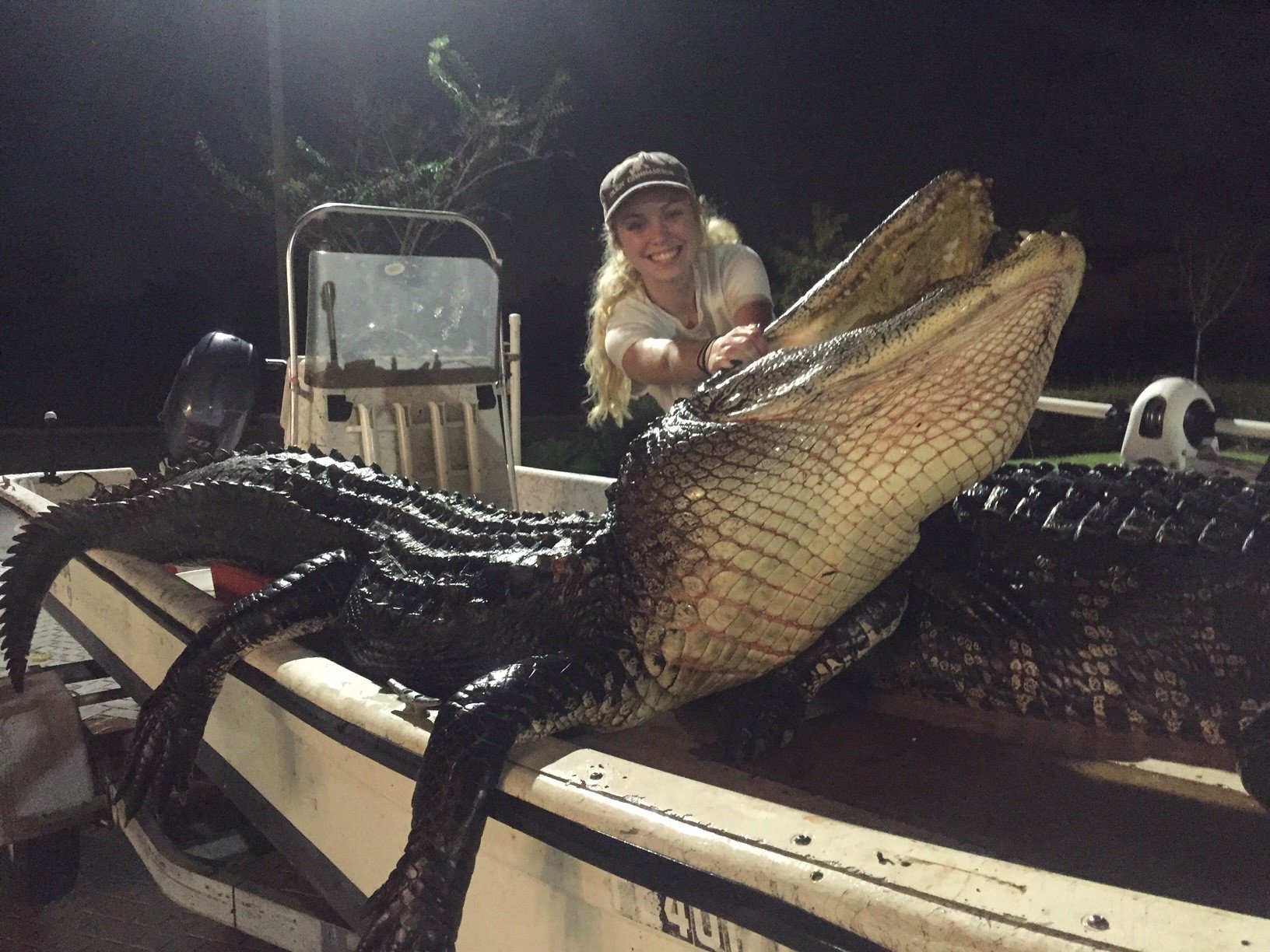 The man who moves a mountain begins by carrying away small stones. Hopefully the next man is not dropping his stones on the mountain you are trying to move.
3 · Share on TwitterShare on Facebook