Interesting title for a thread, huh?

But there's a reason for this, which is open discussion and debate about getting less missed hookups, more strikes and harder fights. One of the things I've seen a lot of here in Florida in both salt and fresh water is my lures flying in the air or the fish making so many repeated attempts then just toss their fins up in disgust and go elsewhere. Let's face it folks it happens to every one of us and I for one get tired of it. Some fish just can't seem to zero in. It's common really. Yes, I think I read it somewhere that more often than not, fish commonly miss their intended victims on the first try. Could it be that fish need a qualified "Marine Optometrist"? 😉Or maybe they just need a little help zeroing in, much like some folks need cross hairs when target shooting. Either way somebody needs to do something about this, dad gummit! Well I found something that works for me in my neck of the woods.

I think I got the idea from some micro crank bait builder website. Sure I bought one of they're "all glowing" baits and never once had a strike. Quite possibly because it just gave em all a fright or the willys. I've read of a few success stories of fellow anglers in the cold waters of the northern latitudes who actually fully coated their spoons and sealing em up. They swear by it. Spoons don't work so well (for me anyway) where I frequent. Crank baits however get hammered. Plastic worms too, but I'm more of a crank bait & topwater guy. While I did try full coat glows, nobody was interested as I guessed they wouldn't be since Florida freshwater species never see glowing bait. So I tried something a bit less drastic by simply buying a 1/2 Oz bottle of solvent based glow stuff from glowinc.com. Basically it's nail polish with extremely long lasting glow powder. Just a dab here, a dot there. No sealant or top coat and it stays on and on. I didn't want to add even a thin layer epoxy sealant because I was already adding weight enough that I didn't want to upset lure balance and behavior too much. The material will glow for at least 10 hours.

Doesn't seem to be effective in attracting or getting more hits at night. But I've noticed a drastically improved rate of hook ups. During the day, I've not missed a fish that struck. Always a hookup, harder hits and fights. One of the most productive places I use them is deep backwoods creeks where the lures will pass through sun (charging the glow) and then shade. I've nailed just about (not all) every species you can find in these places whereas before, not so much. In some of the smaller creeks I've pulled out 3lb bass and nobody would believe it until I had my adventures recorded. Even the local wildlife biologist and game warden said it couldn't done there..... Until they saw the recording.

The big question open for discussion is "Does this little bit of glow attract fish or does it better serve as a bullseye for em to focus in on?" My mind seems to think it's a bullseye. I've included a small token image of some of the lures. Note, the camera makes it look like they're nuclear bright. They're not as bright as they appear here.

Feel free to discuss, toss your 2c worth or what you do to improve things. 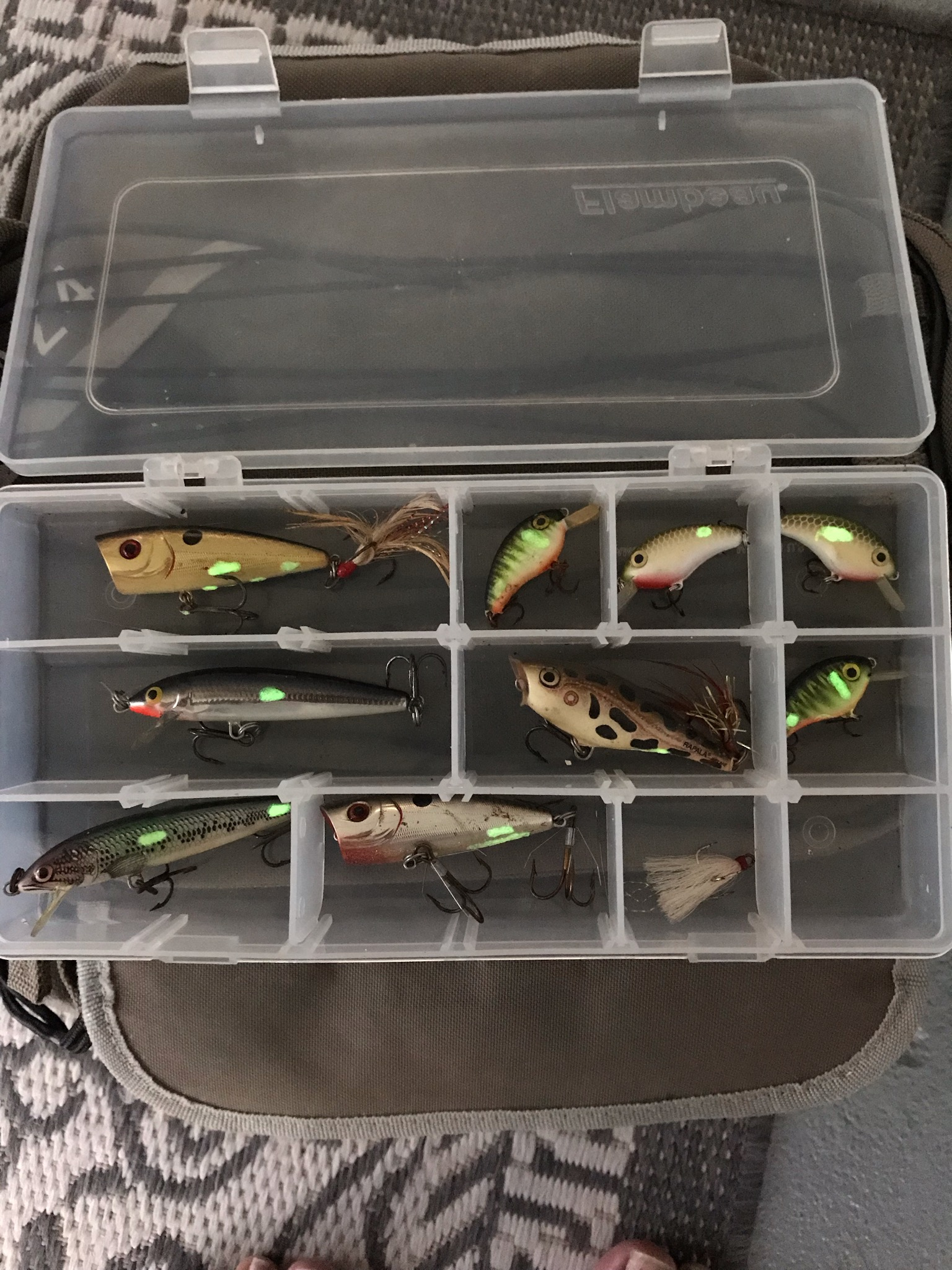