Capt Dan Medina Posts: 797 Officer
May 2019 in Southwest General Fishing & The Outdoors #1
Tuesday the 14th had a group of 3 for a full day of offshore fishing.  Pulled out of punta rassa around 7am and offshore we went.  Had winds and seas out of the west. Ran roughly 35 miles before dropping on our first spot for some red grouper... Rods doubled over instantly and went 1 for 3 with 2 breakoffs and one solid red grouper.  Continued for grouper with several more breakoffs on some large fish. Grouper bite slowed down so decided to move onto a nearby wreck for some action. 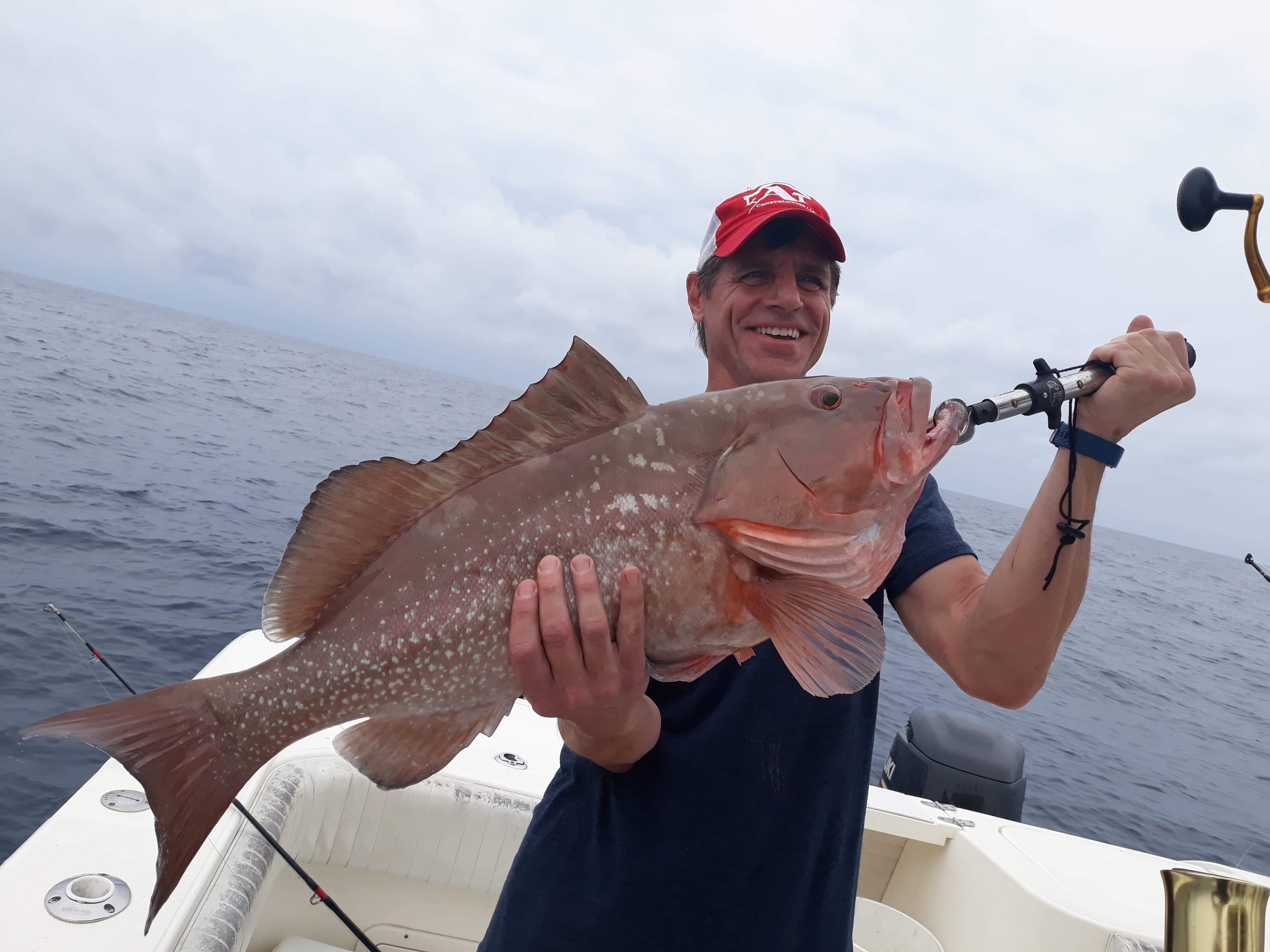 first bait in the water gets smashed by a barracuda... Drop down some baits to the bottom with hookups to some large animals that wanted no part of being pulled from their home. Lucas got a smaller sized amberjack to eat on the flatline.. quick pic and released. A bottom rod went off and a 4 ft reef shark was caught and released. 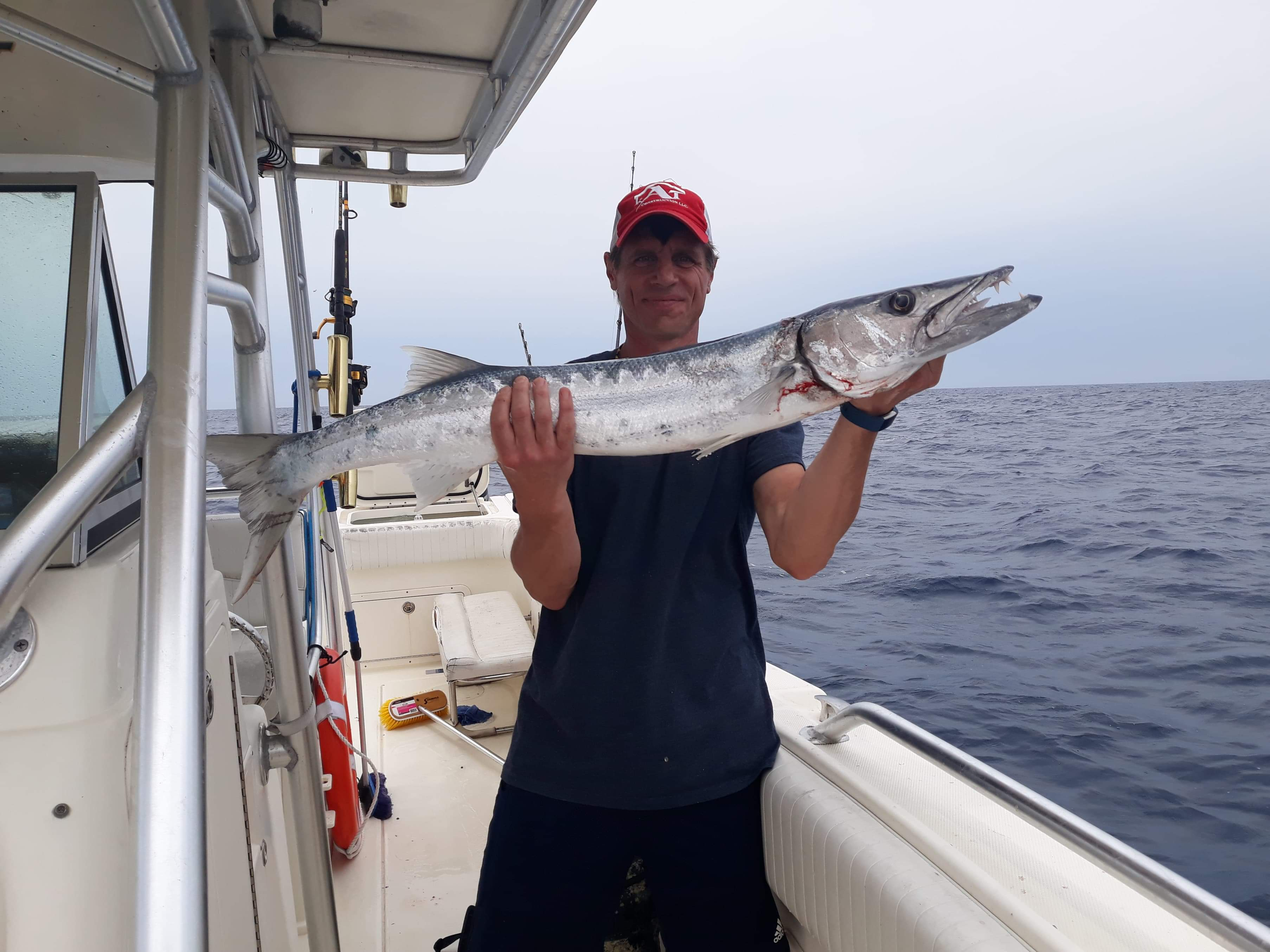 Keith had a big jigging rod with penn 9500 dropped down with a live bluerunner on the bottom.  The rod doubles over and he lifts back, but goes nowhere.... it slowly pulled off drag almost as if he didnt know he was hooked.  keith got bout 3 or 4 lift and cranks before the fish realized it ws hooked and dumped off a bunch of line.  The fight ensued as a give and take, keeping constant pressure on the fish... he would make burst and take lots of line, but they gradually became shorter and we made some headway... Low and behold after a 40 minute fight, a solid goliath grouper popped up on the surface. Very impressive on a spinning rod! 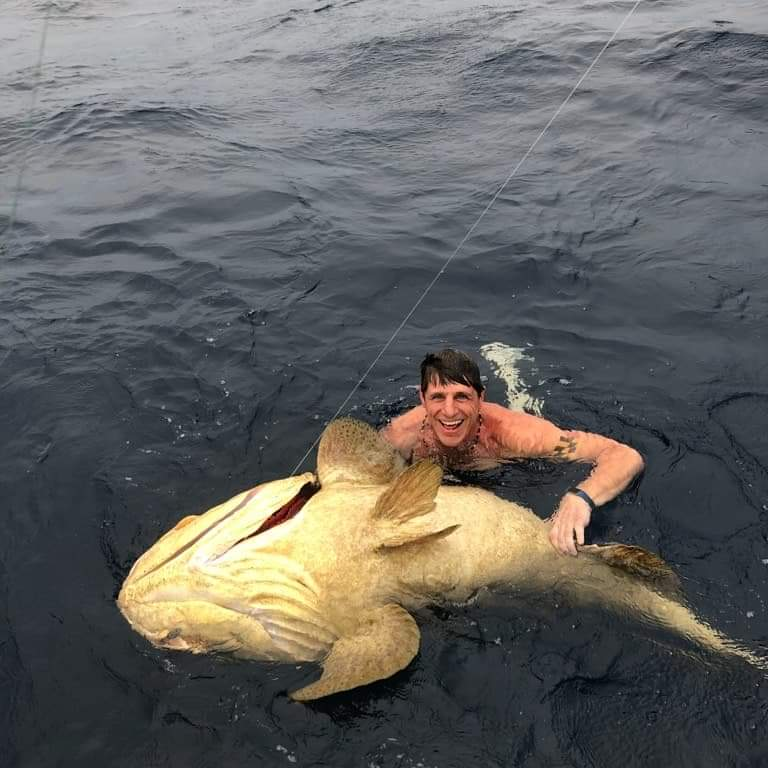 Great way to end the day.

Weds, Keith and Lucas came out again while grandpa stayed back from the long day on the water. We pushed on out and first drop was for some red grouper in 100 ft.  There was almost zero current and no wind, but the bite was on fire. Got the 2 man limit in under 20 minutes, with 2 more keepers coming up that were safely released before pushing on out to tangle with some other fun fish off the wrecks.

Headed out a bit deeper to a wreck in 130 ft of water. It was non stop action from the time we got there till the time we left. Dropped down some big tomtates to the bottom and it was instant hookups to good sized amberjacks. Keith had the hot hand and landed some stud fish. The cudas were thick and a lot of flatlines got cutoffs pretty quickly. watching the fish take the baits o the surface is always really exciting! Had a unch of hookups, several doubles, some came unglued, some made it to the boat for quick pics and releases. Had a bluerunner on a flatline that got smoked and fish dumped 2/3 of the spool on a 9500 spinfisher v... Got a glimpse and it was a giant kingfish... Unfortunately it ended up chewing thru the stinger rig!
Decided to drop down a big bait on the bent uttt to see if anything wanted to play... took all of 2 minutes before the rod doubled over and we came tight. Lucas made quick work of the estimated 75-100 lb Goliath. Another quick photo, vented and released to fight another day.  Was a fantastic day of fishing! 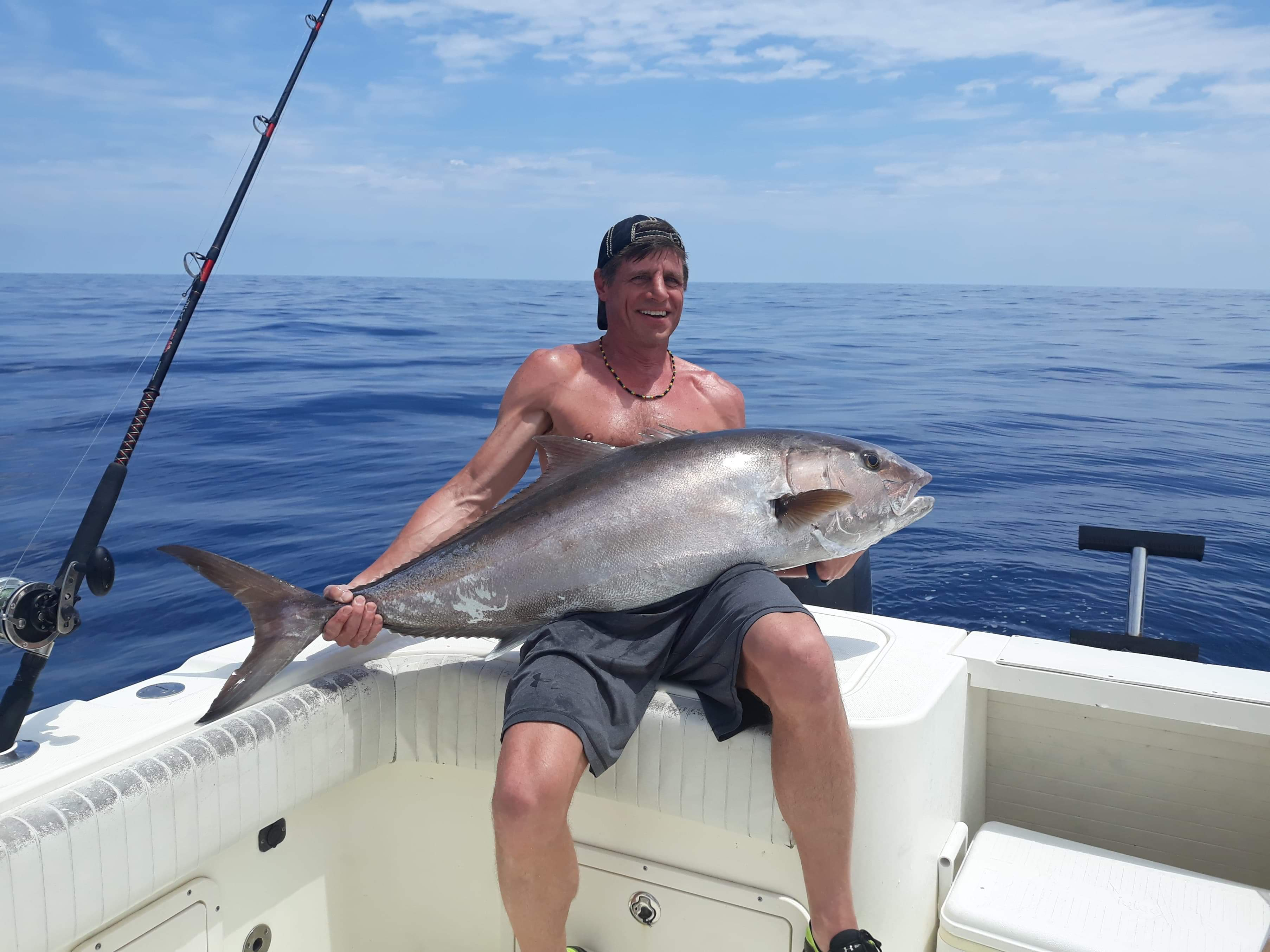 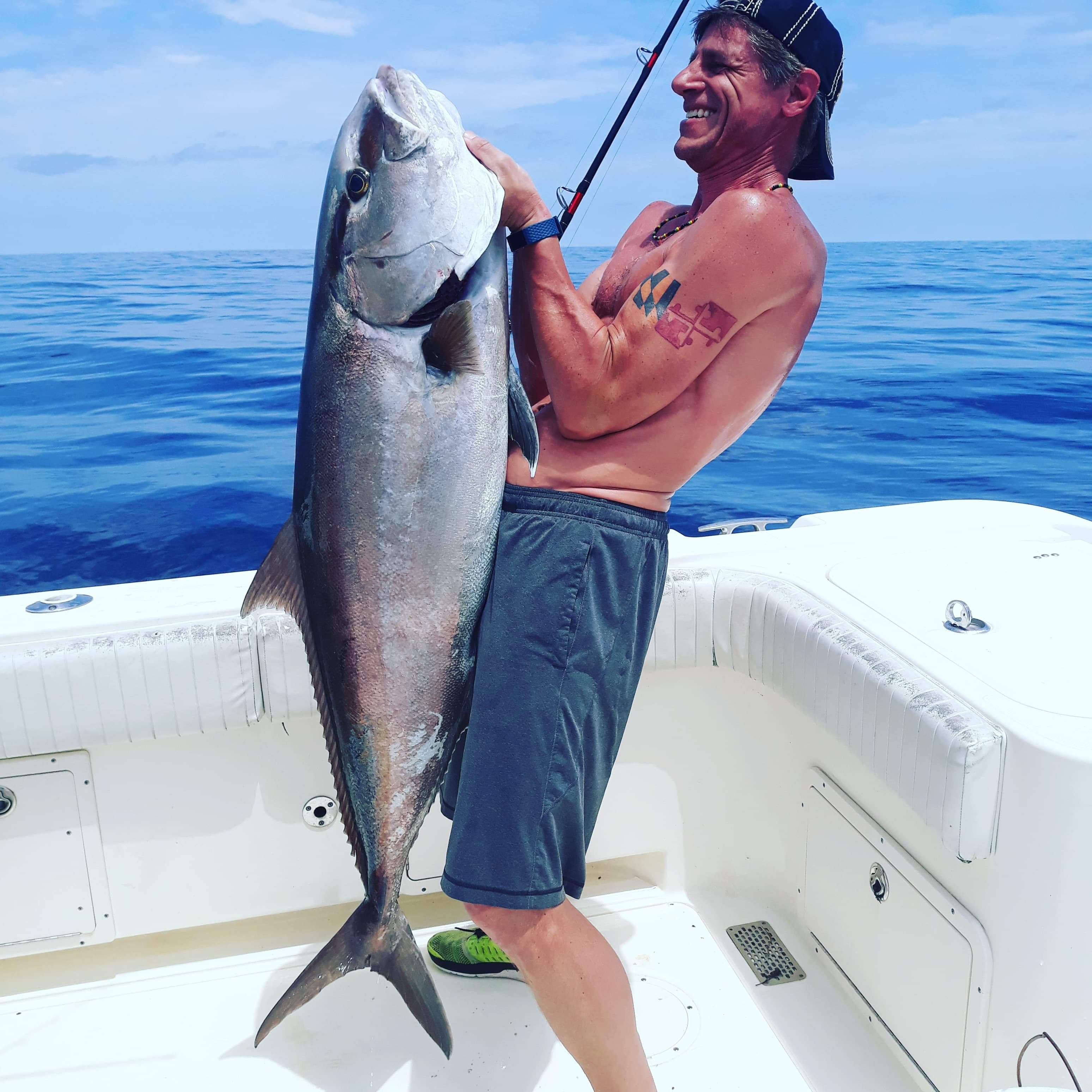 Thursday had a group of 4. Launched from pineland marina in search of some grouper and snapper for a few meals. pushed out to 90 ft and dropped down some squid and squirrel fish.Bite was super hot, but lots of 16-18 inch sized grouper. Pulled one keeper before moving to the next spot. Next spot produced a ton of nice lane and vermilion snappers. Had one decent red grouper come up, followed by a big bend in the rod which resulted in an estimated 8 ft Nurse shark being brought to the boat. Safely released to fight again.

Moved around a bit and continued adding snapper and another grouper to the box.  Winds shifted from due north to  due east and the light for grouper **** off completely.  We continued catch lanes an vermilion, then another big bend in the rod that peeled off 400 yards of line on some pretty tight drag on the senator. Had to chase the fish down as it had no intention of slowing down. It was a duel, with small gains and lots of drag screaming runs.  took roughly an hour to finally get it within sight and up to the boat.. an estimated 8-9 ft shark... it still didn't want to cooperate a i wanted to remove the hook, but it decided to run off another 200 yards of line. At this point knowing what it was, we put heavy pressure on the line that eventually parted. Another very impressive catch considering it was on mono leader with a circle hook!