I  Launched at Boynton Beach Inlet around 0445 am and caught a couple of Goggle eyes on my Sabiki before buying a dozen to head out for a pre-dawn deployment in deeper water.   The weather was flat calm with no wind. At 6 am I put out my first two live Goggle eye baits in about 120ft. One bait was set out on the surface, and the second was presented 60ft down on a downrigger clip.  About 15 minutes later, The surface bait went tight, and the line started peeling off the reel. 10 minutes into the fight, the downrigger line went taught, but the clip failed to release the line, and the fish broke off.     Fifteen minutes later, I was sinking the gaff into a nice Jumbo Blackfin Tuna - oh yeah! This is what I got up early for. 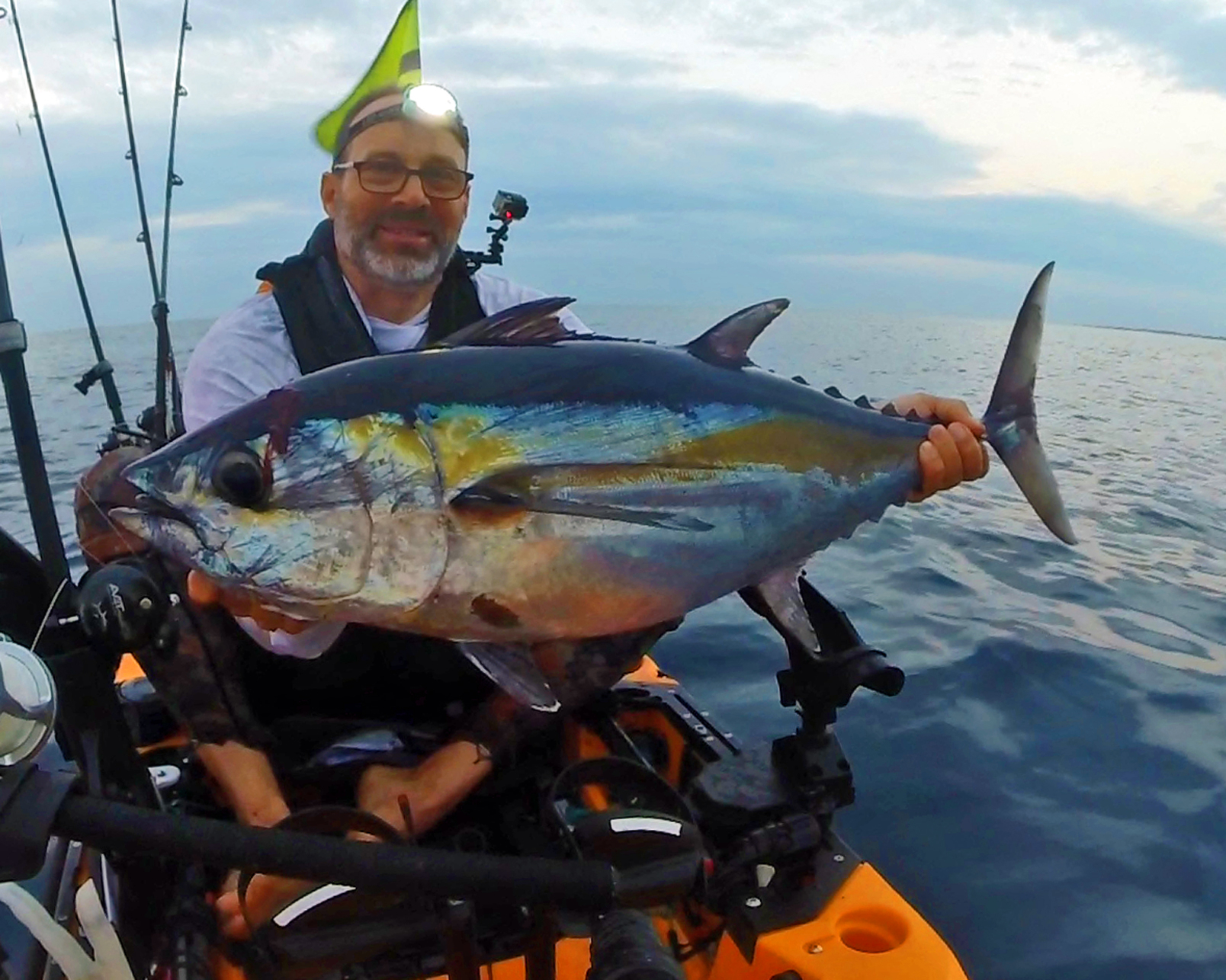 The drift was stronger than I had hoped for(about 2kts in 200ft), and by the time the fish was unhooked and bleed, the kayak had drifted North of my planned destination.  I had to decide whether to spend 30 prime minutes of dawn fishing peddling against the current back to the wreck or keep drifting. I decided the time would be better-spent fishing and drifting, so I deployed the next two live baits in 200ft of water and continued the drift.  One bait on the surface, the other on the downrigger, while casting my vertical jig ahead, peddling up to it so that it was vertical as I went to retrieve it. 10 minutes later, boom, my vertical jig rod bent over hard - yee haw ! I was pretty sure I had another Jumbo Blackfin! Minutes later the downrigger bait was bitten, and this time the clip released, and the reel was singing as the fish was pulling out line -- Double hook up!  I wound up the downrigger weight and left the bait rod in the rod holder while I focused on bringing up the vertical jig fish. Now I was being pushed Nth by the current, while pulled Nth by the one fish while lightly blown out to sea as I focused on landing the jig fish. In about 300ft of water, Mr. hammerhead shark shows up. No Way Jose was I going to let that shark eat the fish I had fought so hard to bring to deep color, so I free-spooled the fish and allowed him to take out a hundred yards of line. 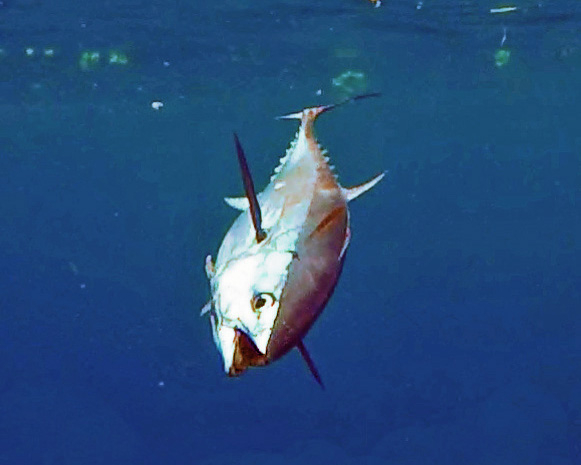 I waited for the shark to disappear, then poured the coals on the fish to get it up on the kayak as quickly as possible. I was disappointed to see that it was not another Jumbo Blackfin, but an Almaco Jack. 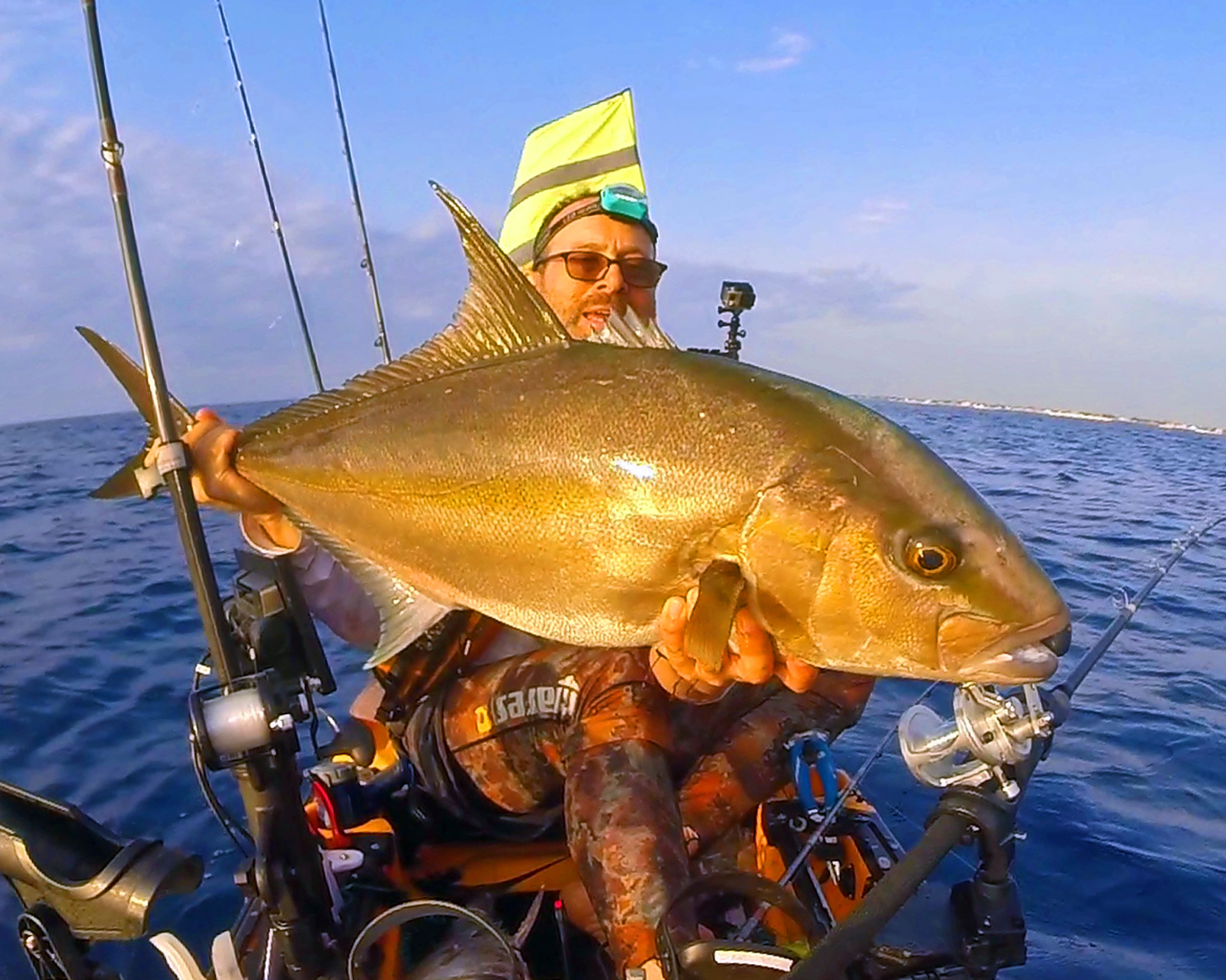 Since this fish was an Almaco, and the bait hook up was minutes later, chances for another Almaco were high.  By the time I had released the Almaco Jack, My reel was nearly spooled and it was nice to start gaining back line. 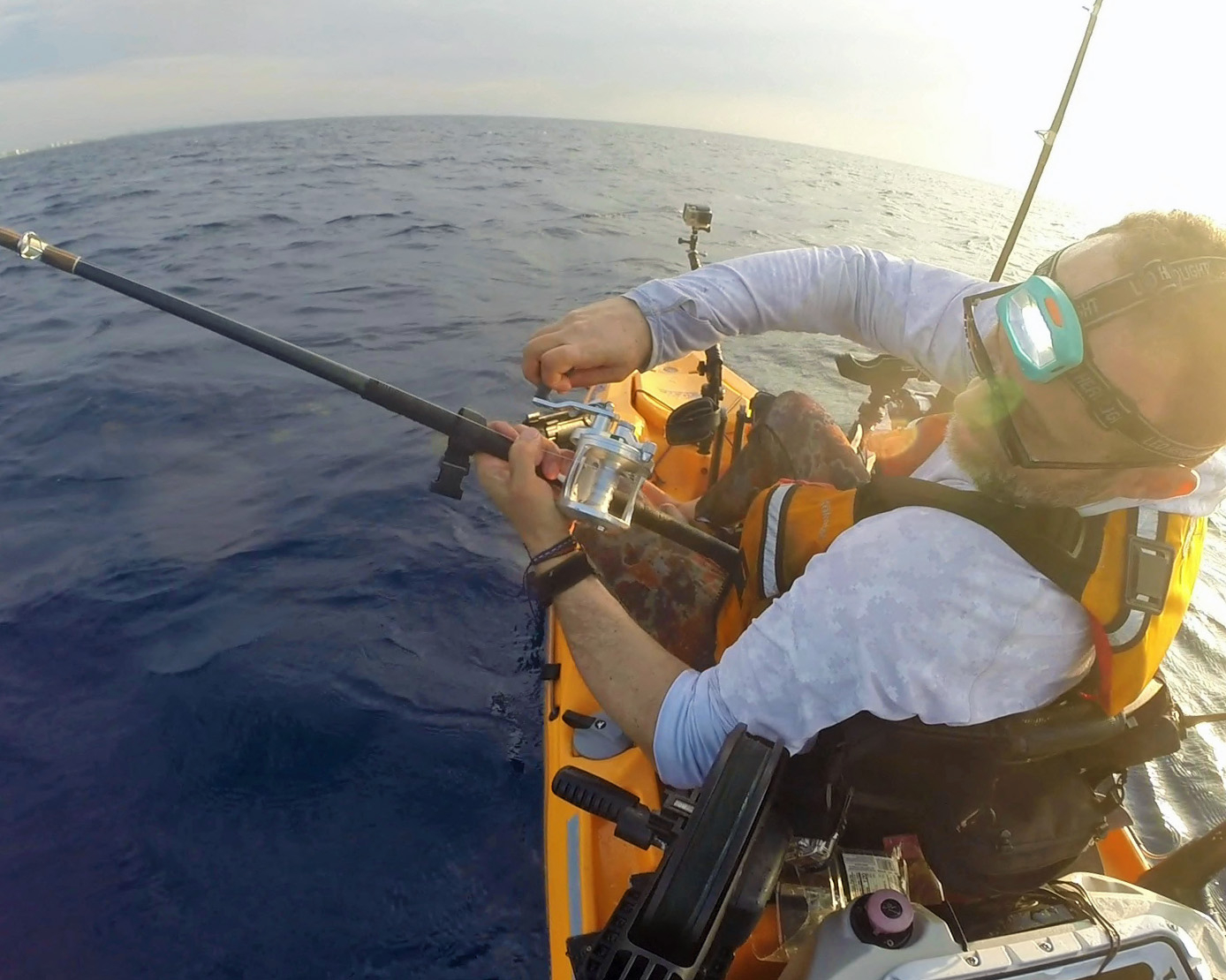 About 15 minutes later, I finally landed the second hook-up, and was stoked to see another Blackfin Tuna! 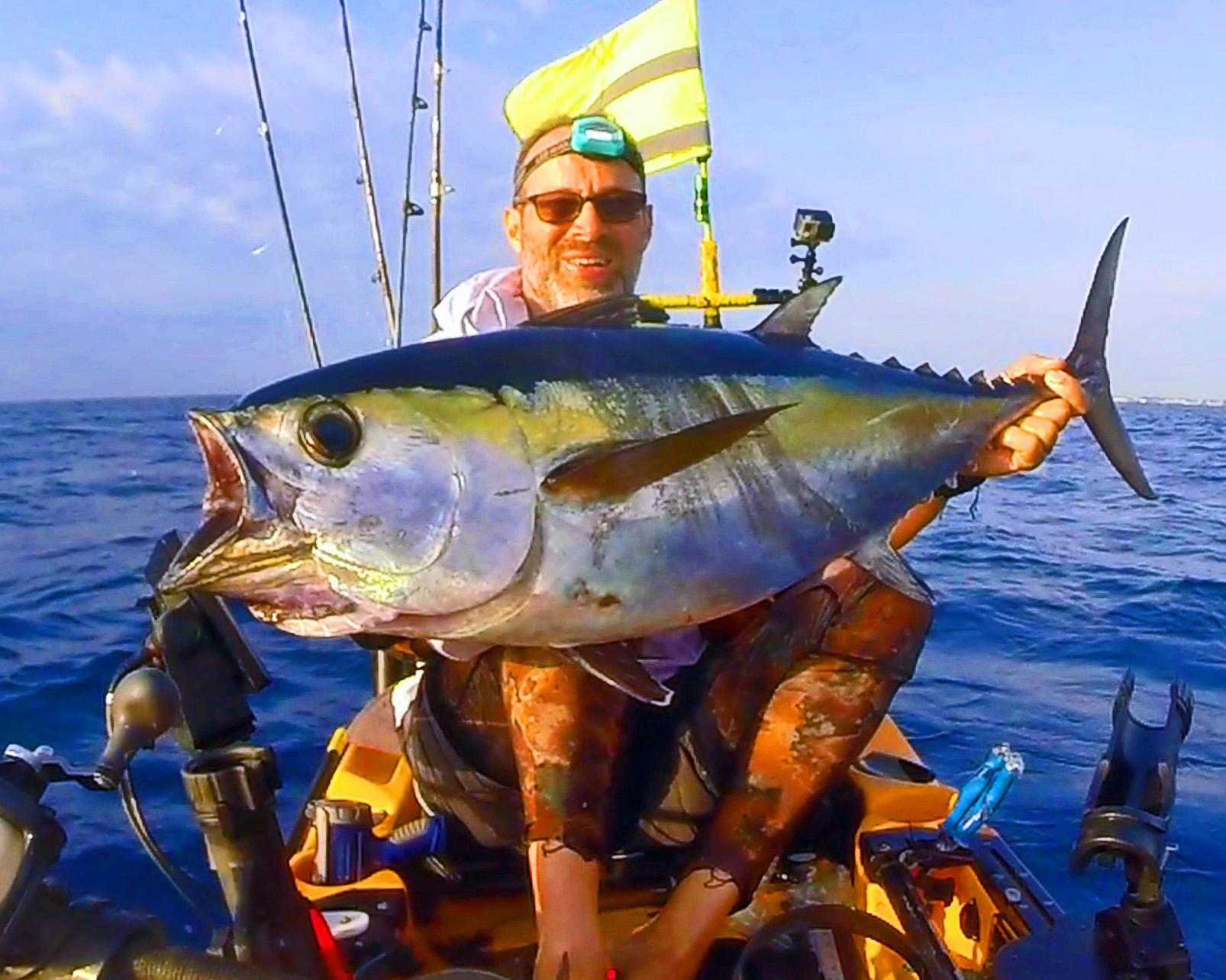 At that time, I was in 360ft of water and drifting 3 knots Nth, I decided to peddle in fast to get out of the current before re-deploying lines.  In 180ft of water straight off the Lake Worth Pier, I put out my spread again. Minutes later the downrigger bait was struck again. This time the fish ran hard, but did not have any head shakes….no head shakes is a strong indication for a shark.  Sure enough, it turned out to be a big Lemon Shark. As soon as I visually confirmed it was a shark, I broke it off...as I did not want to spend prime time morning on sharks. Shortly after breaking the shark off, the surface bait was struck. It was a classic King Mackerel strike with a smoker run.  Sure enough, boom! A nice King! 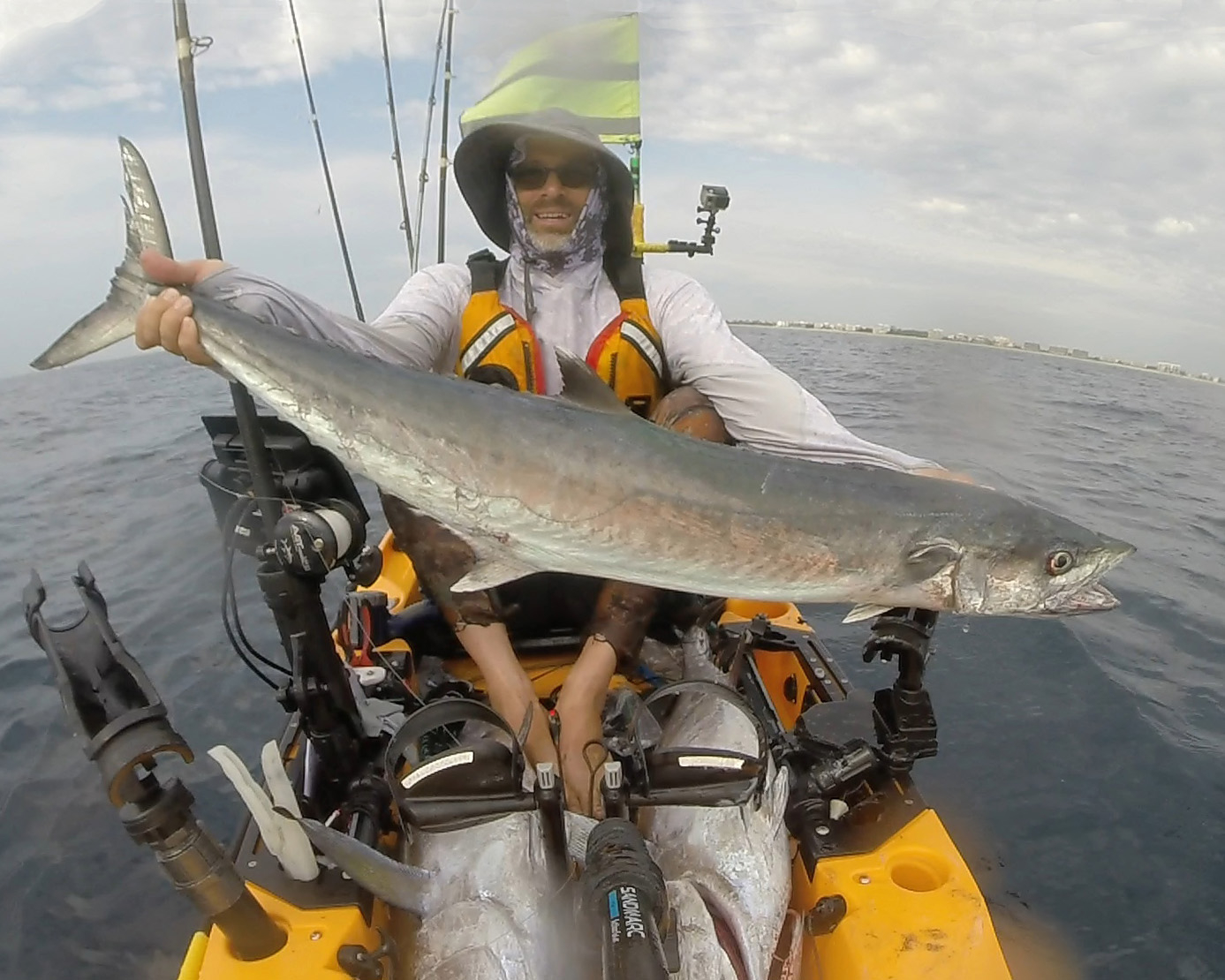 Now it was time to get all these fish in the fish bag.  Unfortunately, the Outback is only rated for 425lbs. When I went to put the 3 fish in the fish bag, the back end of the kayak went underwater and became very unstable.  The most I could keep in the fish bag on the back was the 2 Tuna. In order to peddle stable, I had to keep the King Mackerel on the bow hatch to balance out the load on the kayak. 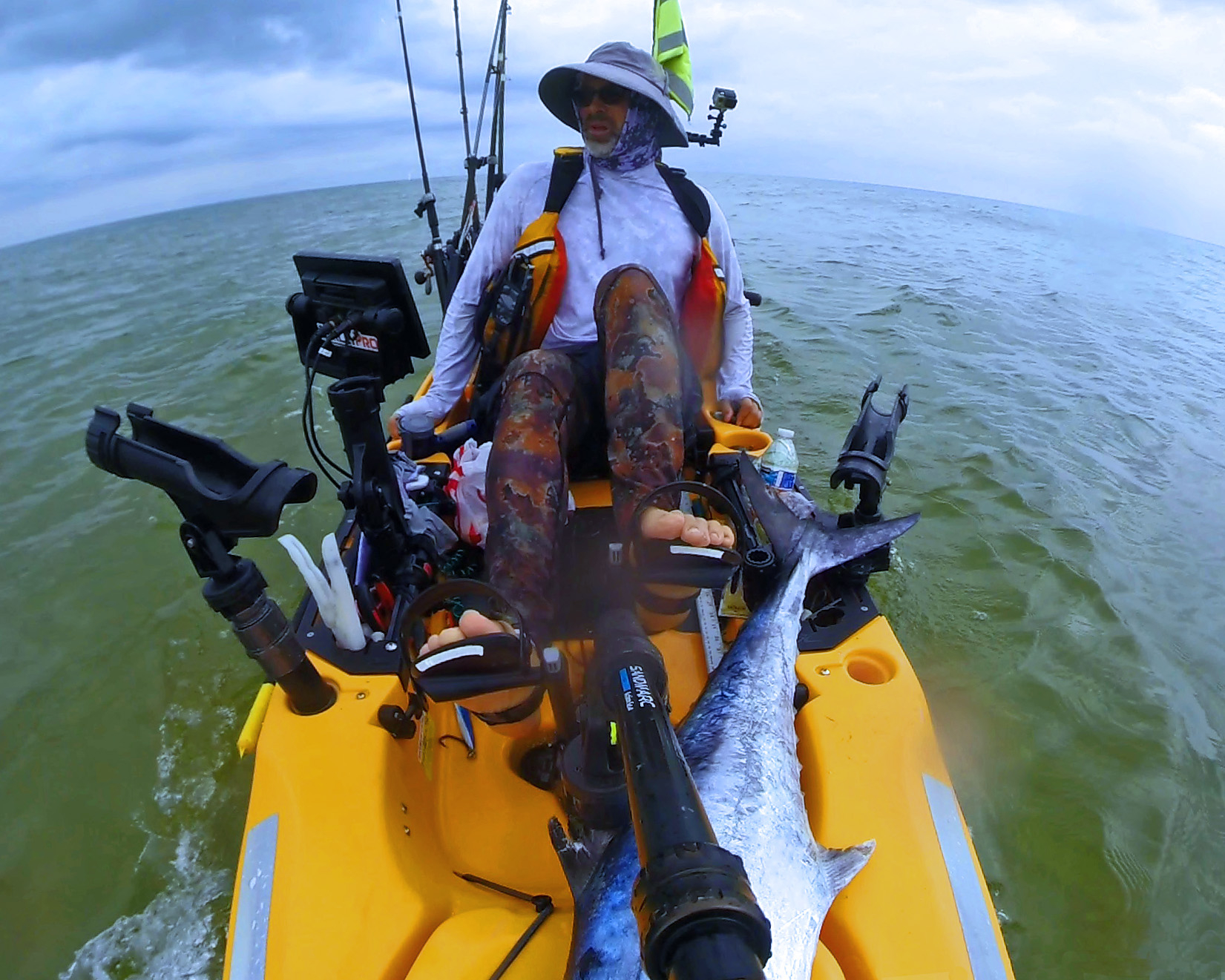 My original plans were to drift all the way to West Palm Beach, but under my current situation, I was done.  The kayak was at maximum load, and I did not feel comfortable continuing to fish as I would have been unstable with any additional fish, plus the weather typically gets windier in the afternoon.  With that in consideration, I released 6 perfectly good live Goggle-eyes, emptied my live well, and called it a day. I did not feel like continuing the drift, so I peddled close in near the beach to get out of the current and then back up to my launch spot 4 miles South.  It was a good work out. If I had to do it over, I would have taken the Pro Angler Kayak which has a 600lb capacity. 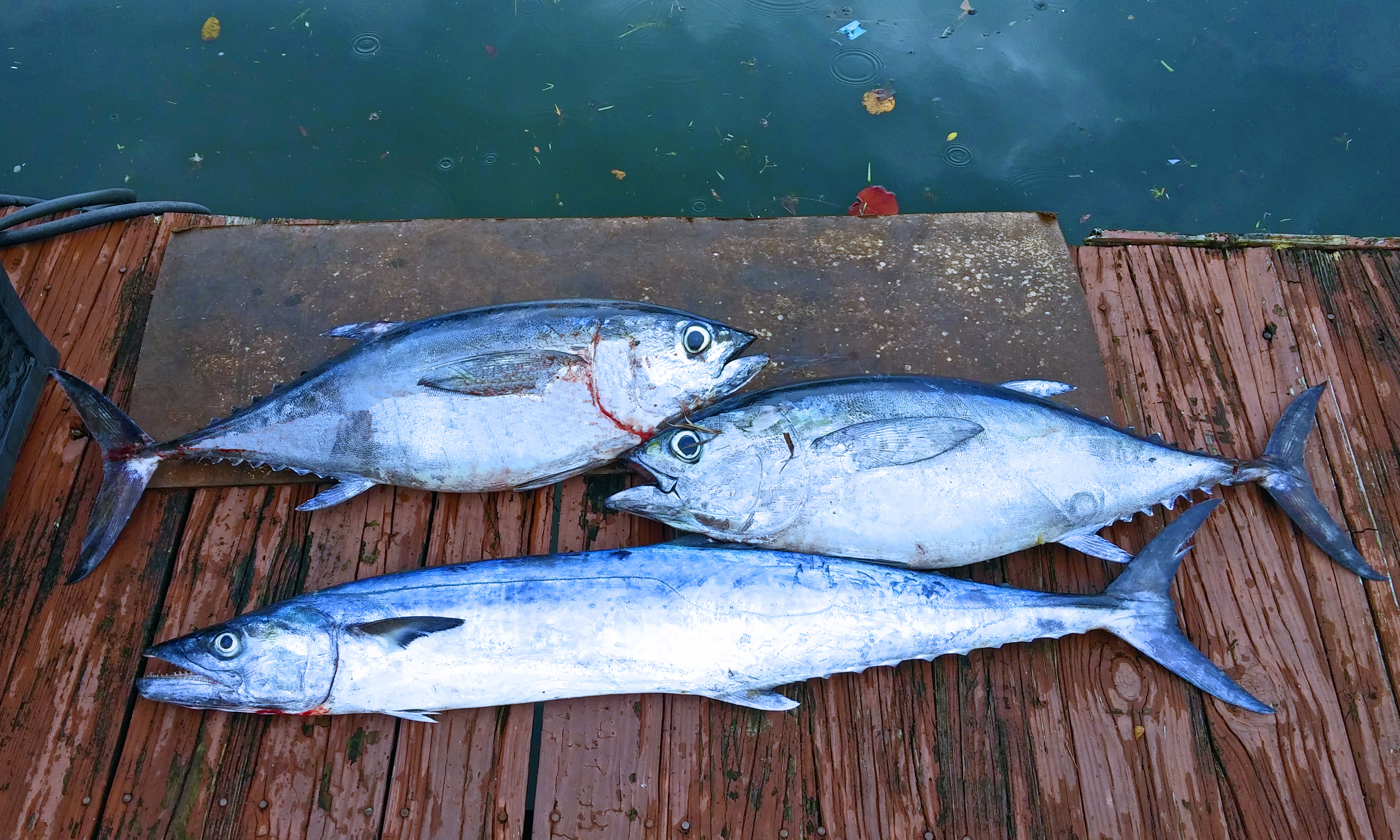