kayakerinkeywest Posts: 631 Officer
May 2019 in Fly Fishing #1
We've had a couple weeks of very cooperative weather.  The Tarpon have filled up all the usual basins and outlets.  But I needed some video footage of some flats action, specifically Bonefish and Permit.  I already got a Bonefish using a jig and shrimp, but I wanted to get some footage of on the fly.  Three out of five flats areas I drifted had Bonefish.  Found one spot that caught my attention because of a Permit cruising around.  While stalking that fish I found that it was hanging out with a school of Bonefish.  Was able to pull a couple of Bonefish and had a few shots at cruising Permit.  Only had one crab that I caught earlier so was holding on to it until the magic hour just before sunset.  Unfortunately we are in the midst of some super tides so water levels were too high to see any finning fish.  Bummer.  Still, got some good footage of the Bonefish for my new Flats shirt release.  If you are interested, you can check them out at www.AllAboutTheBait.com. 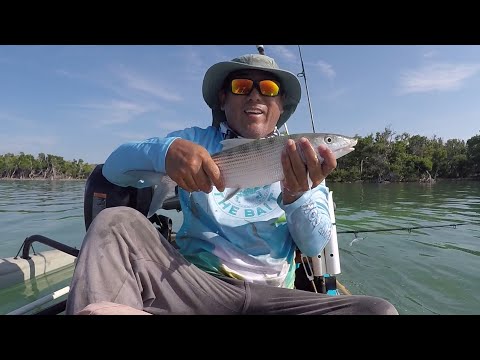