benwah22 Posts: 239 Deckhand
May 2019 edited May 2019 in Keys General Fishing & The Outdoors #1
A little over a month ago, the Yankee Capts posted that they were offering a new exploratory trip.  We would possibly fish in areas that have not been fished before, focusing on depths between 300 and 400ft, out somewhere near Pulley Ridge.  As anyone that knows me understands, I fish for the opportunity and little else.  This was the opportunity to get into some untouched areas, where the fish have never seen jigs before.  Sign me up.

As we got closer to the date, the weather forecast just kept getting better and better.  Ultimately, we wound up with vicious .5ft seas and a light breeze. The office shot out an email to get ready for deep water. Game on.

The boat had about 17 men aboard, most were familiar faces, with a couple first timers intermixed.  Me and two other jig fisherman claimed the bow to avoid tangles with the rest of the boat, who were mostly fishing bait.  We headed offshore promptly at 2pm, with our eye on the first drop somewhere in the 2am range.

As I say with every report, and I’ll say it again here, GET THE MEAL PLAN WITH CHEF CHAD.  Look.  I get it guys.  You like eating soggy PB&J three days into an offshore trip, or whatever concoction is getting microwaved in your Tupperware, but good Lord, for a little more than a C note you get three meals a day that are 100% better than anything you’re cooking at home.  In fact, I only got one picture of the food because I’m fat and scarfed it down before I remembered to take a picture.  Bacon egg and cheese on a bagel, stuffed biscuit sandwiches, PRIME RIB, pesto rice, steak tacos.  Just get your life and order the meal plan. Hell, just not having to bring cases of drinks on board is worth the money.  Anyway, here’s some prime rib for your face: 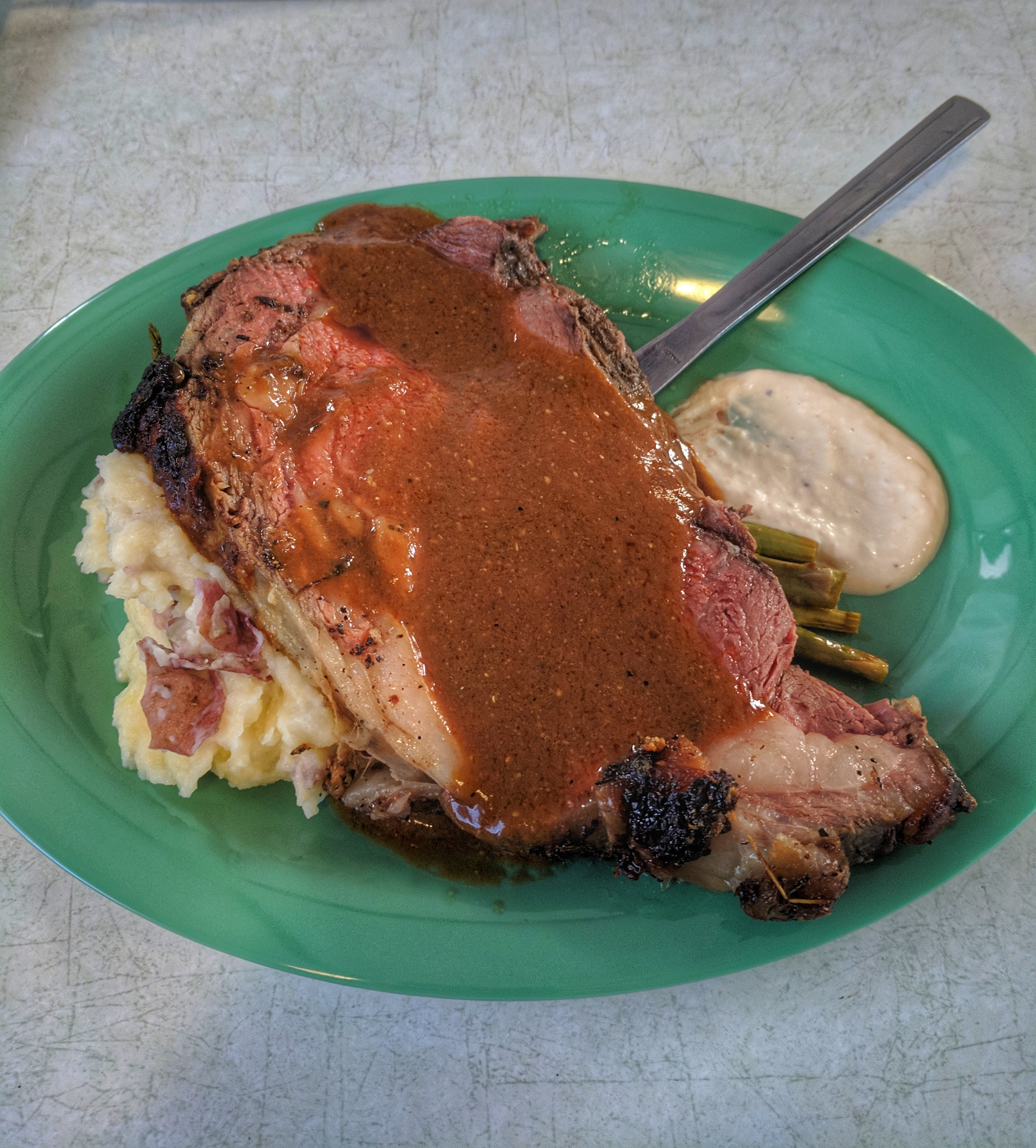 So we got to the first spot at about 2am, as expected.  Engines off and game on.  Let’s see what happens.  As with any trip, you’re always excited to get lines wet, and we got right to it. Tuna bite was on, bottom bite on.  My tally before sunrise was two muttons, two hambone and five blackfin.  I donated 2 blackfin for the ridiculous tuna/avocado poke that Chef Chad made (well worth it).  Oh, and by the way - these aren’t Fort Lauderdale hambones. These are 5-8lb hambones.  Here’s one that smoke a jig in the early morning: 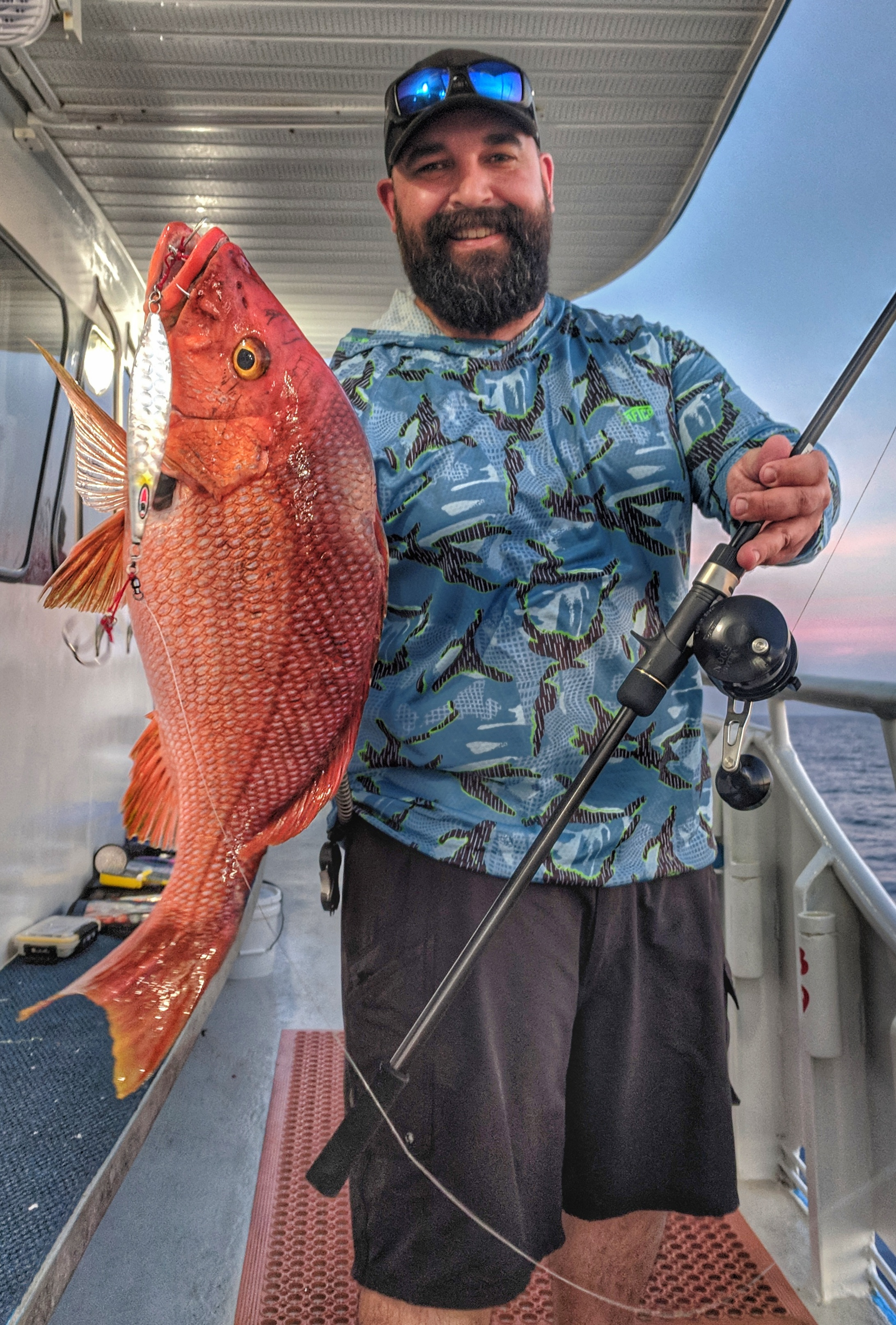 After sunrise city, Capt. Greg got on the new PA system (which works great, btw - you can actually hear him clearly, which is especially nice when he tells you how lovely your fishing shirt looks - anywho....) and says “We’re going to make a move offshore into some deeper water. Anyone that has electrics, I’ll give you 5 minutes to get your stuff together before moving.  Going to be about a 30 minute ride.”

Well, we get out to the spot and we’re pretty deep.  About 750ft.  Let’s get ‘em down and see what bites.  The usual suspects of snowy grouper, blueline tile, and other misc. species come up.  We picked at ‘em for a while, nothing crazy, but a consistent bite.  Time for a move.   As we got to the second drift, Capt. Greg gets on the PA and says “Marking pretty good here, get them down quick!”  Well, when Greg says that you damned well better listen, especially when his new transducer can see a guppy in 800ft of water.  We rushed to get our jigs down, and I was first - instant hook up! And this wasn’t some little guy, this one pulled some drag and was very unhappy to be at the end of my line.  I look over and Bryan’s hooked up instantly, and so is Jim - all on jigs.  Awesome!

Well, after hand cranking about 750ft, the line starts drifting out and I see an awesome Queen Snapper blow up in front of me.  I’ve been searching for a Queen on a jig for long time, and my first one was a pretty good one!  Anyone that fishes knows the feeling of accomplishment of getting something you’ve worked pretty hard for, and this was no exception.  Awkward high fives all around! 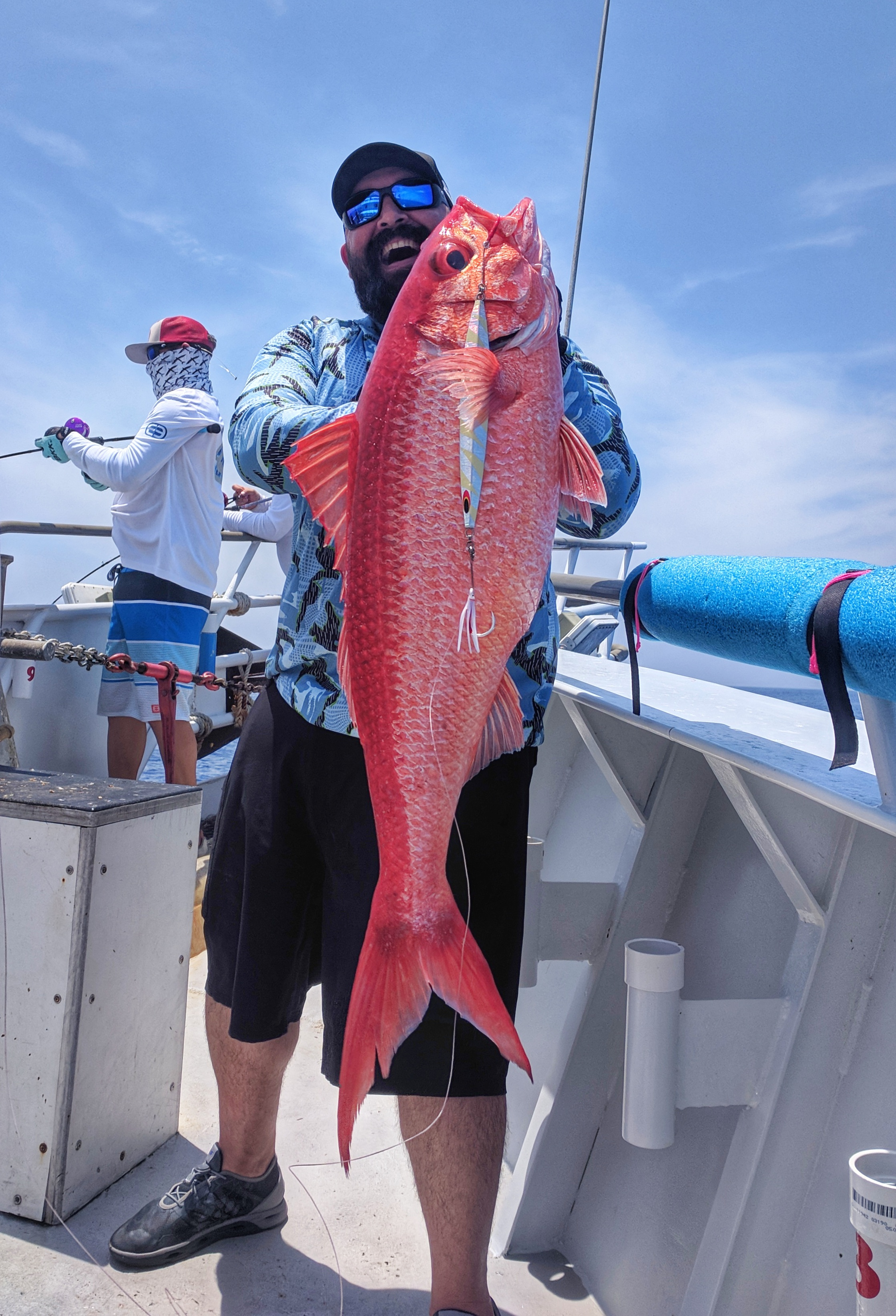 The drift wound up being a super productive one, and we landed many delicious deep dwellers.  Bryan even got the fish pool with his personal best Snowy!

The remainder of the first day out in the deep was just a consistent bite on the jig.  Usually we were landing fish once every three drops, which is a pretty good ratio.  All of the jig fisherman were out of fish tickets by the end of the afternoon on the first day!  After such a good first day, and after Sunset City, we crashed out (most people did) and got some good shut-eye.

Got up around sunrise the second day, and it was more of the same.  I put 3 quality muttons and a hambone in the box before we went back to the deep.

One we got there, it was game on - again.  Not the instant hook ups as in the first day, but more quality fish and a consistent bite.  I was able to land my personal best snowy as well, which was a little shy of Bryan’s pool winner.   Jim even pulled up some crazy sea monsters that I’ve never seen landed before: The only issue was having to pick through AJs and full grown Almaco jacks in the deep. Nothing will crack someone’s spirit quite like landing a 50lb-ish AJ from 650ft.  I was unfortunately “lucky” enough to do it twice....oof. 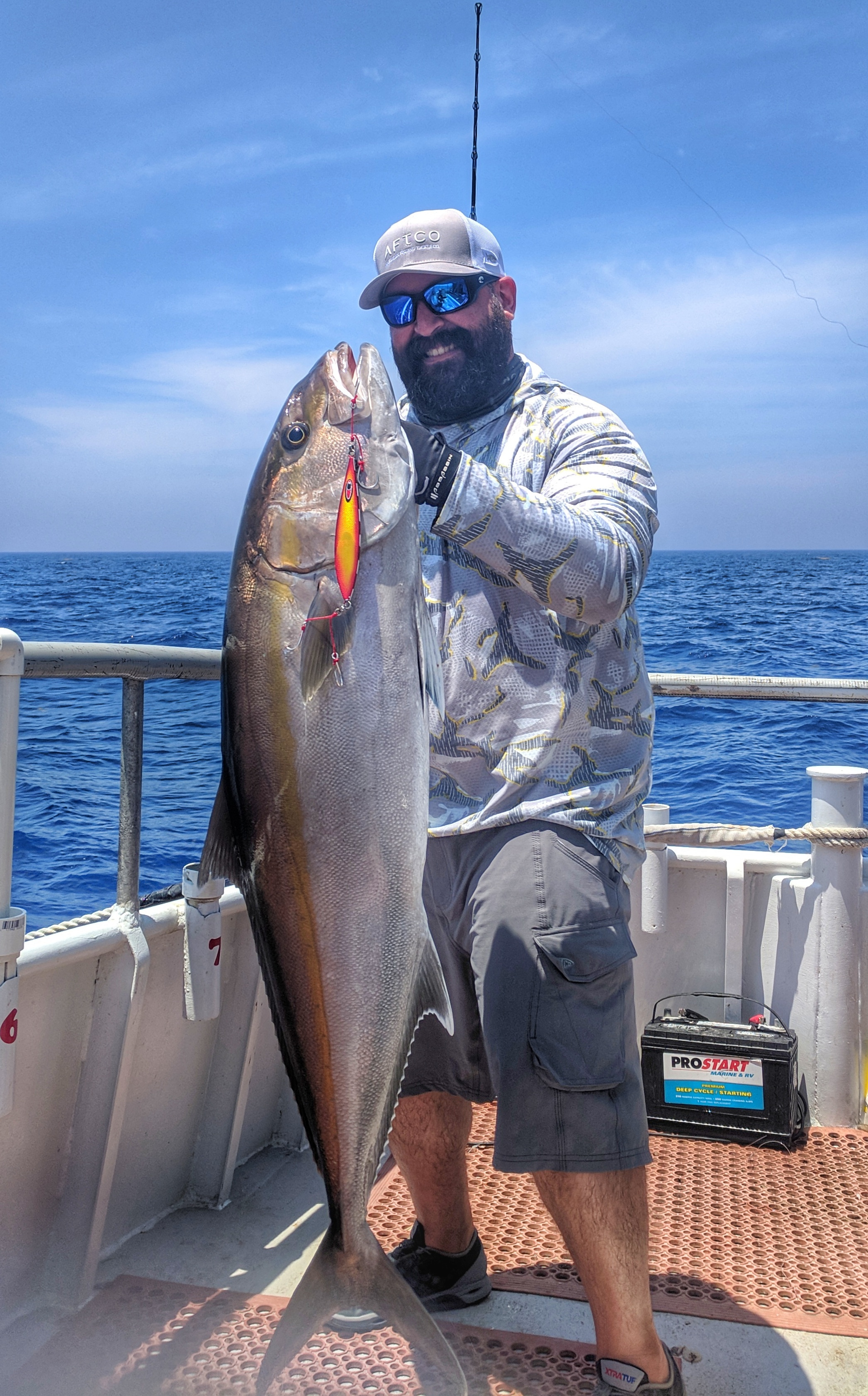 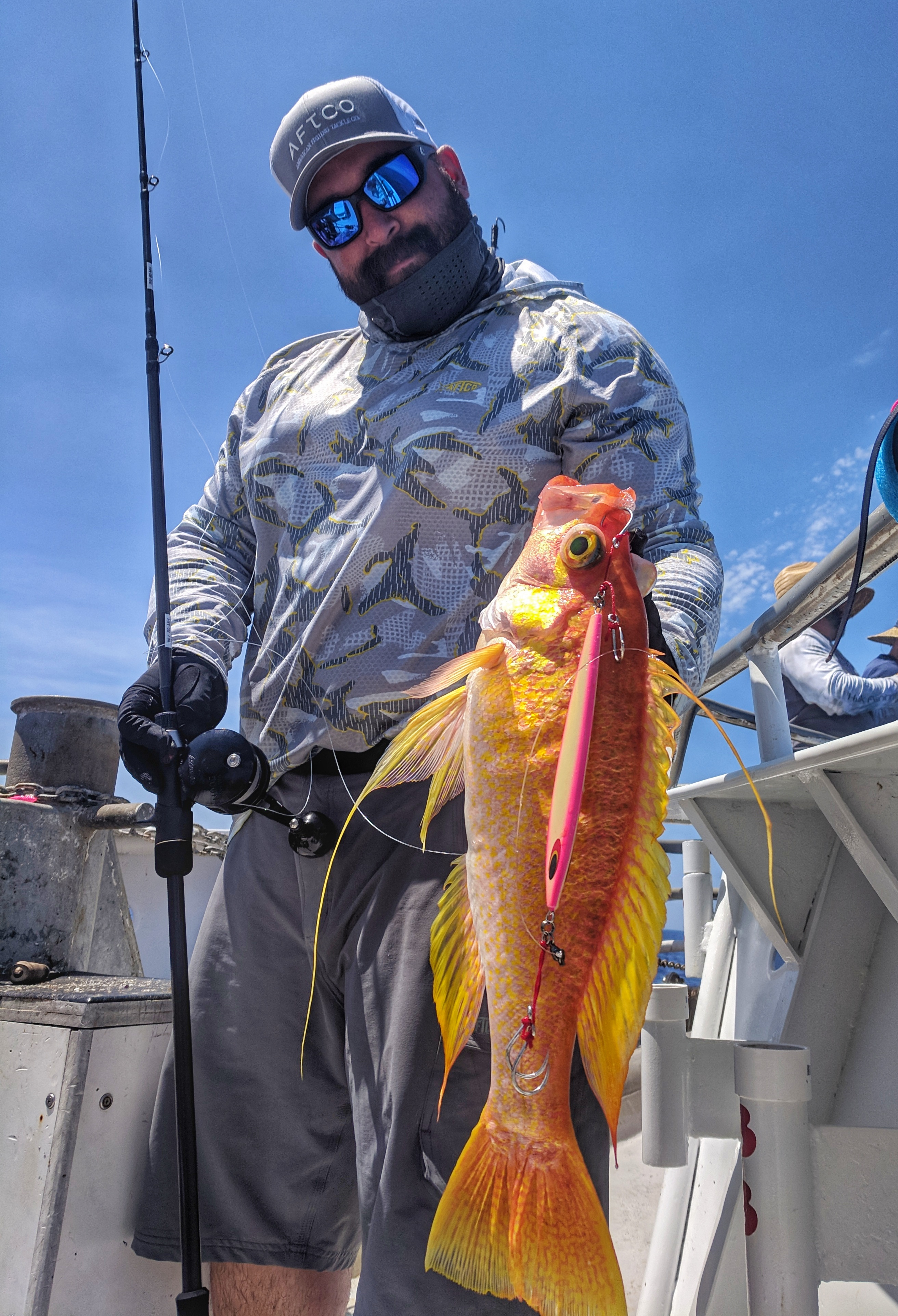 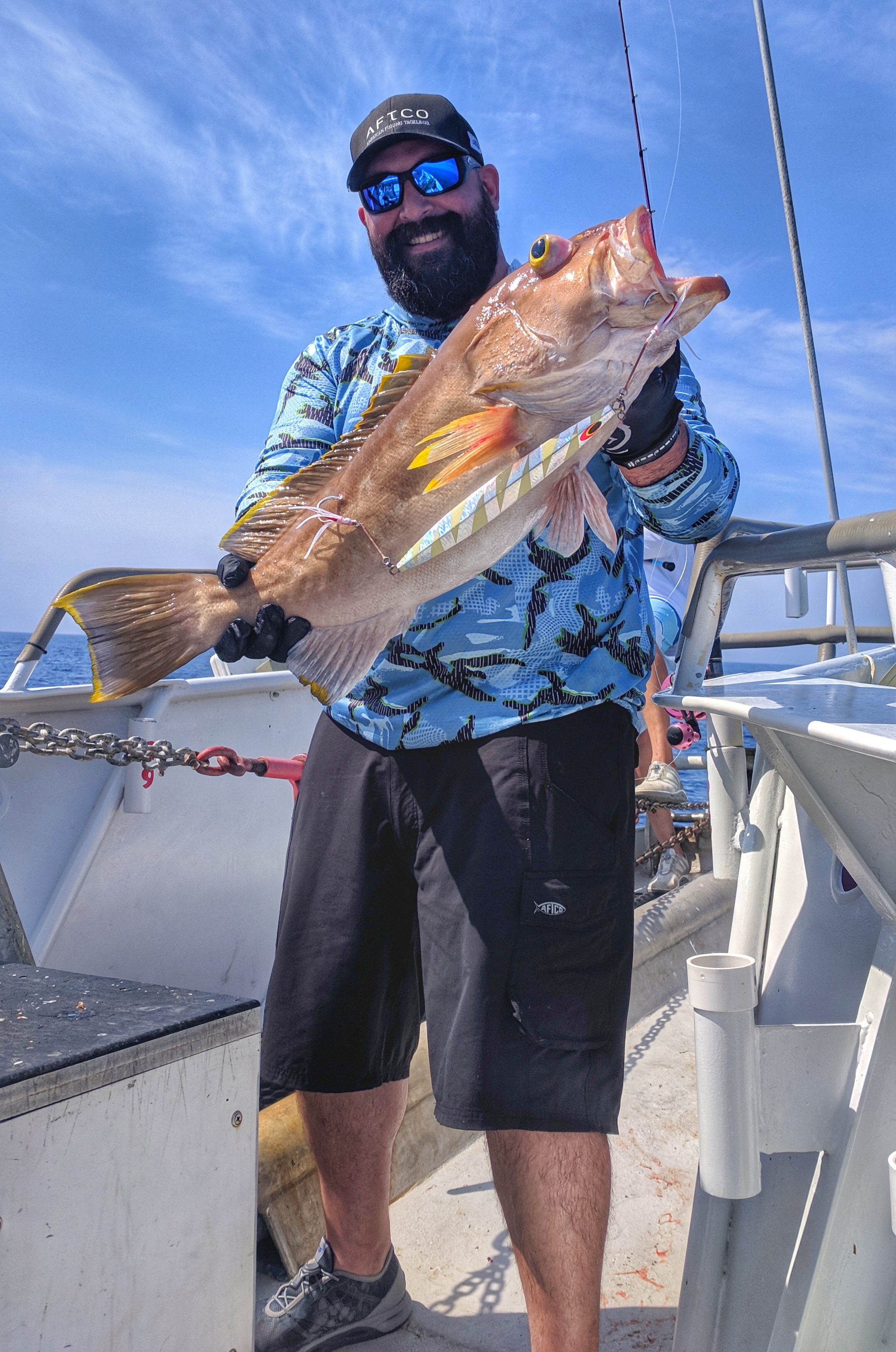 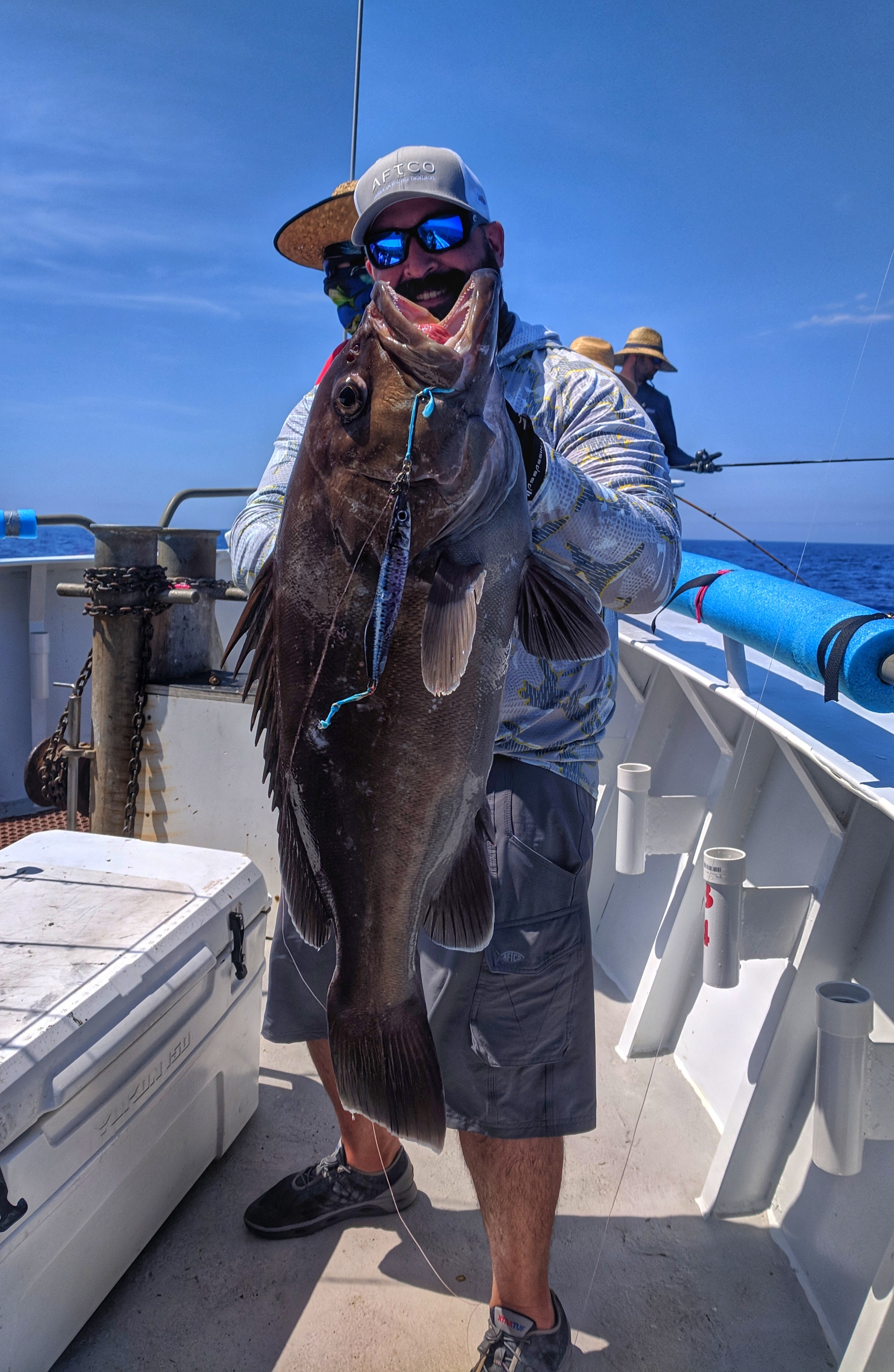 By the time sunset was rolling around Saturday night, I was smoked.  We jigged hard for 2 days, and didn’t touch a bait the whole trip - hand cranking from the deep.  That being said, it was an absolutely banner trip. We had to buy some more coolers when we got back to the dock.  I’ve never had a trip where I was able to consistently land big fish like this one.  Just amazing. Until next time Yankee Capts - thanks for everything! 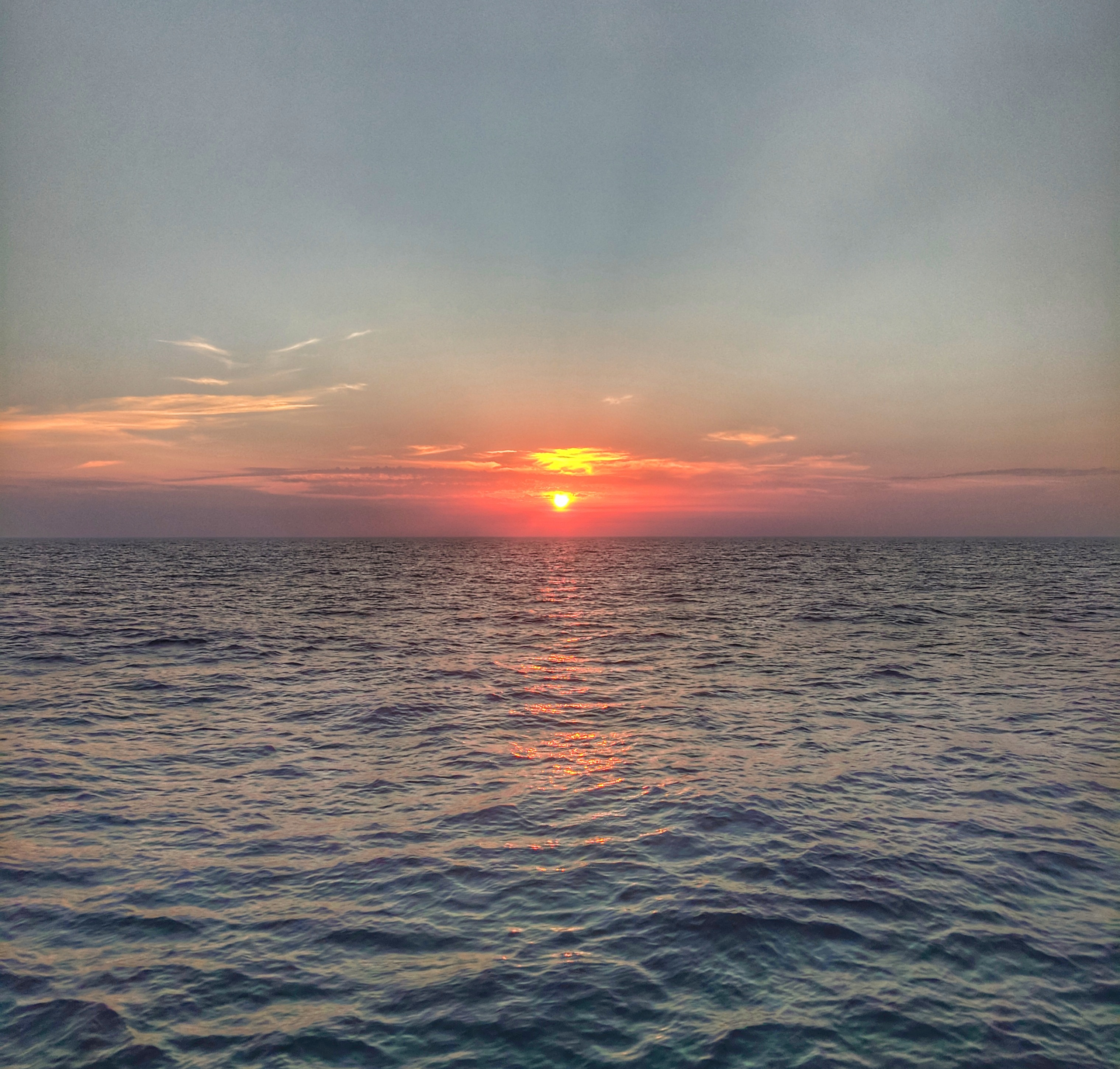 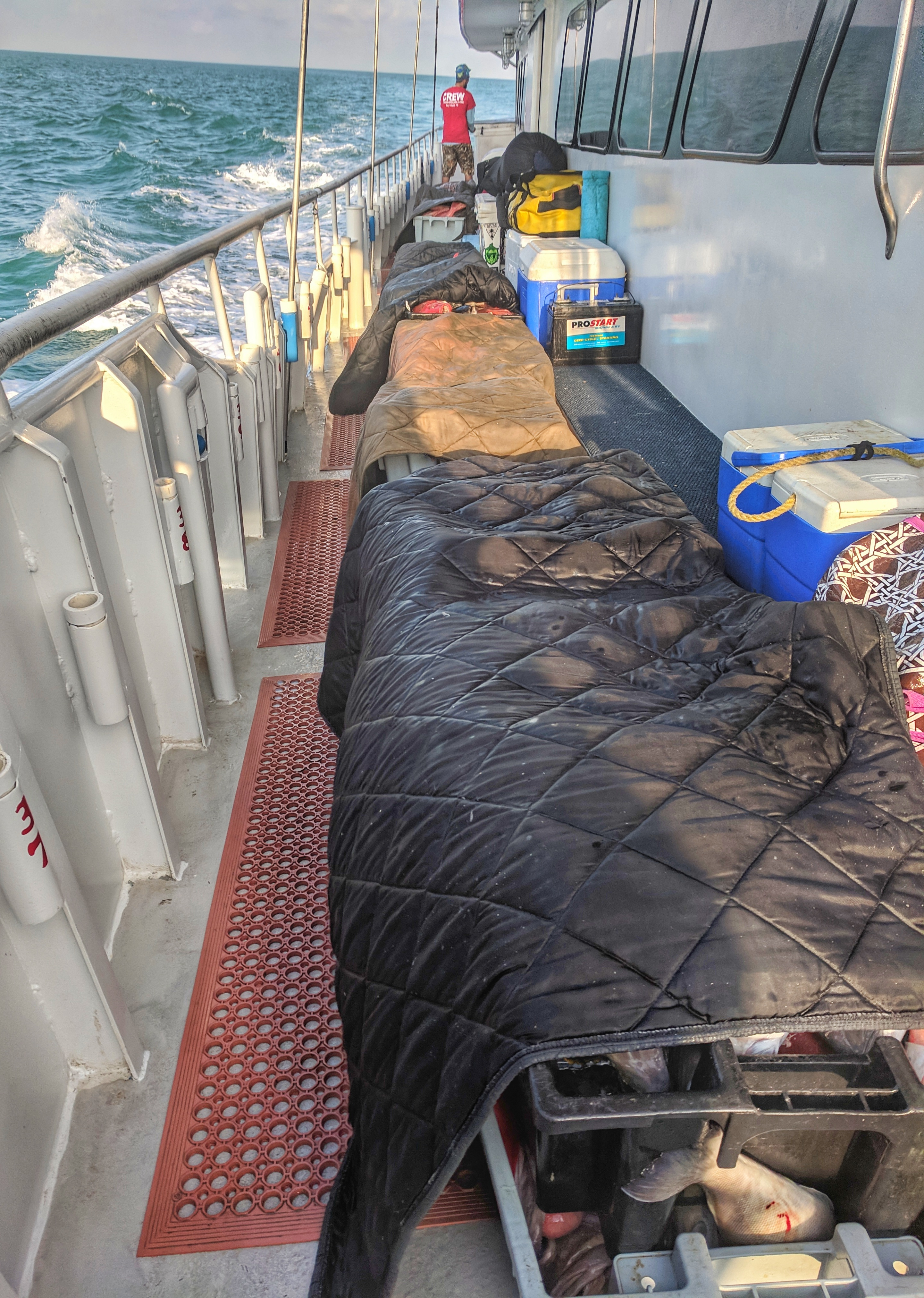