First Slam in A While

Bassin Assassin Posts: 1,299 Officer
March 2019 edited March 2019 in West Central General Fishing & The Outdoors #1
Got a late start today, but got to my spot on the SS around 2:10pm. A few boats around so I headed south. Water temp was 78-80 degrees. Incoming tide till 5ish and still kind of low. Wind out of the WSW and nice given it was kind of warm. Floating grass is already becoming somewhat problematic. Fished the 3" RT mullet in shadflash shad all day, except for a number of casts with a Whopper Plopper 110 in bone. I did have one red follow the WP, but turned away at the boat. Hooked up with my first fish, a small snook, at 2:30pm. Nine minutes later another one. Decent 23.5" snook at 2:44pm. Fifteen minutes later another small snook. His brother at 3:04pm. A bit of a lull in which I tried to lift a rat red into the boat, but he got off. Struggling a bit, but finally got back on the small snook train at 3:46pm. All these small snook are around 18-21".
Another small snook at 4:01pm. Went down in size to a snooklet at 4:08pm. Another snooklet at 4:29pm. Water looked good here with a bit of a stain. A fat healthy snook of about 21" at 4:33pm. Next cast a snooklet. Another dink at 4:43pm. Paralleling the mangroves with a little bit of shade. Felt a subtle tick and set the hook at 4:50pm. The fish was running at the boat. Reeling fast to catch up. Not sure whether she was big or not so I loosened my drag. The fish took off for open water and was peeling drag. This fish had some weight. I turned on the tm to follow her. She didn't jump so I was thinking redfish. She rolled near the surface and I saw a glint of copper and the white of her belly. It was a red, but still couldn't gauge the size. She made a very long run back for the mangroves. I jumped to the back of the boat and tightened my drag. Kept her about 10 feet short. Now floating grass is bunching up on my line and obstructing my view of the fish. My rod tip is bouncing from the violent head shakes. She comes back towards me and it is a tug of war for at least a minute. She peels drag and I reel it back in. I am just holding on now trying to tire her out and hoping she doesn't come unbuttoned. Finally, she is closer and I get a good look. It is a big red. She dives under and around the boat. Finally, she surfaces and the grass slides down the line onto her head. Another couple of mini-runs and I grab the net. Reaching, reaching and finally I am able to slip the net under her. I was spent. 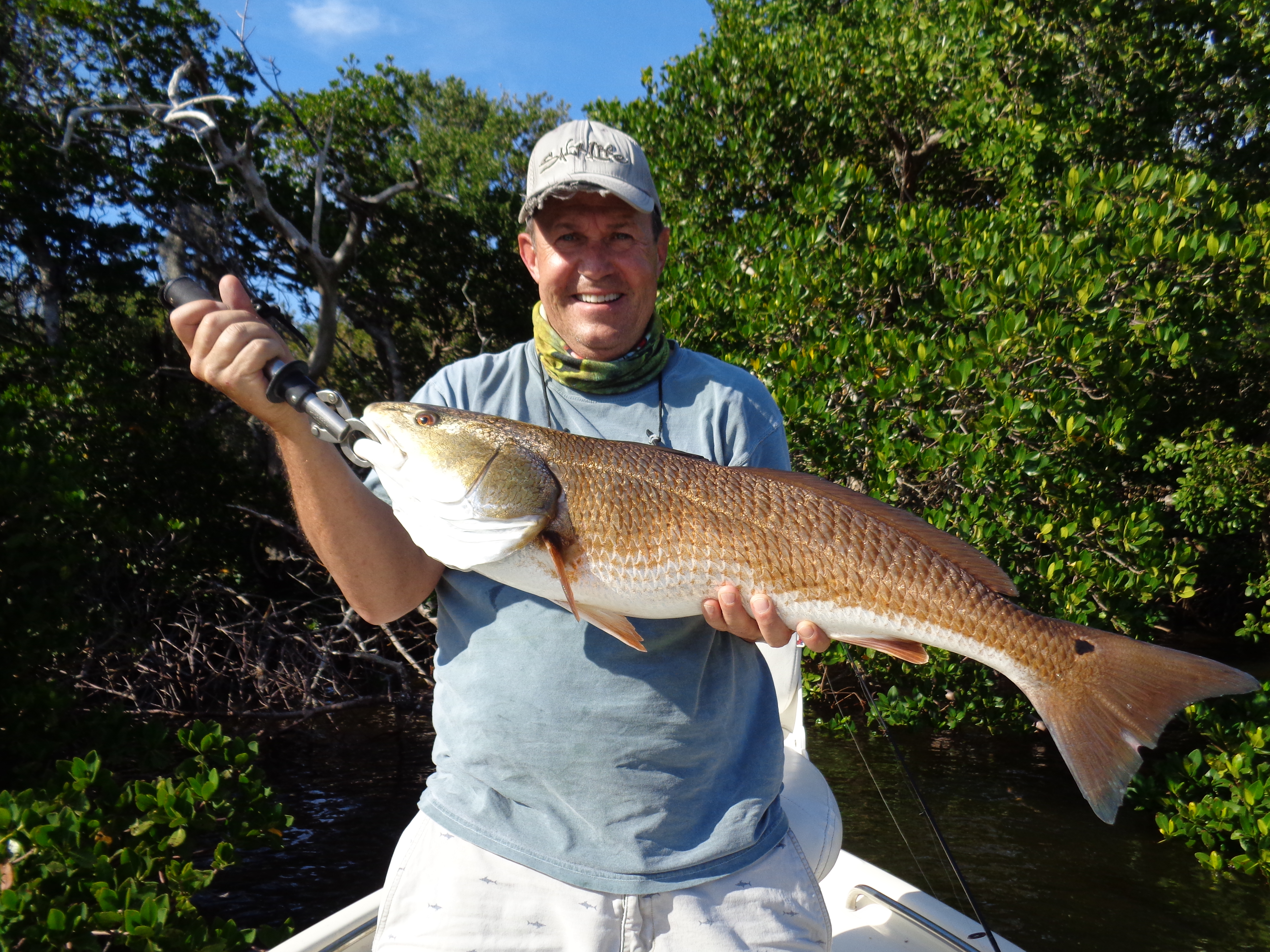 She is a tank! She comes in at 31 3/4" and weighs 11pounds. She kicked hard when I put her back in the water and swam off in good shape. The fish gods must have said ok, that is enough for you right now cause I didn't catch another fish, a snooklet, until almost an hour later at 5:46pm. Three minutes later a rat red on a point. Seven minutes later another small snook. Had a nice bycatch of a small flounder at 5:57pm. Six minutes later I was shocked to hook into an 18.5" trout to complete my slam. Another snooklet at 6:09pm. Another one 4 minutes later. Another lull before I caught another small snook at 6:50pm. Another at 6:58pm. Snooklet at 7:04pm. Another at 7:22pm. Finished with the WP, but no joy. I headed for the ramp. It was a great afternoon on the bay.
Snook - 20 (23.5", 10 smalls and 9 snooklets)
Reds - 2 (31.75" and a a rat)
Trout - 1 (18.5")
Flounder - 1 small one
Improve Our Fishery - Practice Catch and Release
0 · Share on TwitterShare on Facebook