grey2112 Posts: 237 Deckhand
February 2019 in West Central General Fishing & The Outdoors #1
So, wow - what a day Saturday was.  It shall be known henceforth as the Great Sherpa Slaughter of 2019!
Me, my brother, his son (not a diver), Paul, and my buddy Jarno from Finland went out of NPR on the Pickled Pelican.  Jarno was visiting Florida again like he did at this time 2 years ago.  I took him out then in Tampa Bay where he shot his biggest fish ever (16" sherpa) - he spears in Finland's lakes, and sometimes the Baltic, but the fish are small and water is VERY cold.  I really wanted him to experience the GOM so was SO happy that the conditions were great.
Calm, flat ride out at 38mph - first stop was Pasco 4 artificial.
Top water temps 69, bottom 67.  Nice in a 3 mil and no hood.  LOADED with Sherpa - I could have shot the boat's limit on my first dive.  Nailed some monsters.  Saw gags, small hogs, a few goliaths, and a decent amount of mangos.  No sharks, spanish macks or kings seen all day.
Quite a few people showed up while we were down and some got very close to us, definitely less than 100 yards, but at least they were not going fast or trolling around.
Moved on to some ledges near Pasco 2 and then I took the guys to the tanks nearby and the Pyramid since they had never been there.
Had a fun turtle encounter (he ended up following me around for most of my dive, unbeknownst to me) and Jarno nailed a monster mango on the Pyramid.  He used his own design break-down polespear (much nicer than the Mako one I have) and gave it to me as a gift.  I'll post pics of that later on another thread - very cool.
Great time out on the water, everyone took fish home, and the Pelican is running like a top after replacing the faulty O2 sensor.
Oh, and my new dive ladder is making me kick myself for not having installed it sooner - great addition to the boat! 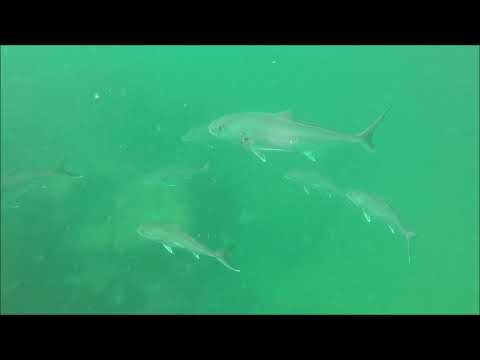