Capt Dan Medina Posts: 795 Officer
January 2019 in Southwest General Fishing & The Outdoors #1
Plan was to meet up at Punta Rassa for a 7 AM departure. Woke up around 415 and got myself bundled up like an eskimo.  This Florida Boy is no fan of the cold! As I jumped up on the boat, I was surprised to find the boat had ice on it! Definitely not a florida thing!
Loaded up and was at the ramp around 6AM. Dropped boat and started re rigging some rods for the day.
Matt and his wife Monique came down from Massachusetts to escape the cold, but it reality they must have packed it in their bag! They arrived early, around 630 or so.  They jumped on board, put on their windbreaker gear, and off the dock by 645 AM.
Forecast said flat, but i figured on 2-3s with the residual from the front the day before. It was absolutely beautiful out, minus that windchill!.
We cruised on out at a comfy 30 mph (did i say it was cold?) and made a quick stop around 70 ft of water on a mark to pick up some baits. Made a few drifts and picked up some nice sized pinfish, Squirrelfish and Tomtates for the well.  We went over a nice piece of bottom and Monique pulled up a small gag, legal lane and legal vermillion on the same sabiki! I gave Monique a small knocker rig on the next drift and she was reeling in a lane snapper right at the surface when an aggressive hammerhead came up underneath it!   She quickly lifted it away...IT was so cool to see the shark zooming and hunting so aggreeively on the surface.. Decided we had enough bait and off to the wreck we went.
Matt opted to make it a bigger fun fish day as they were here vacationing, and he wanted to catch an amberjack to cross it off his bucket list.  We made a couple drifts with lots of shows and not much for hits until we reeled in to start another drift... A cuda was eyeing the bait on the way up, so i hooked one up on a stinger rig and sent it out. The cuda quickly obliged and was off to the races. Matt worked it like a pro (hes a mate on a headboat up north) and had the fish **** in no time. This crossed off barracuda from his bucketlist.
Next drop, monique hooks up and its fighting different than the usual aj... makes a small drag pull, but no runs... turns out to be a small AJ, around 27" or so. Sent it back, and now Matts rod is doubled over... it makes some LONG screaming runs, but Matt again works it perfectly and he boats a large AJ. Great way to cross it off the bucketlist! 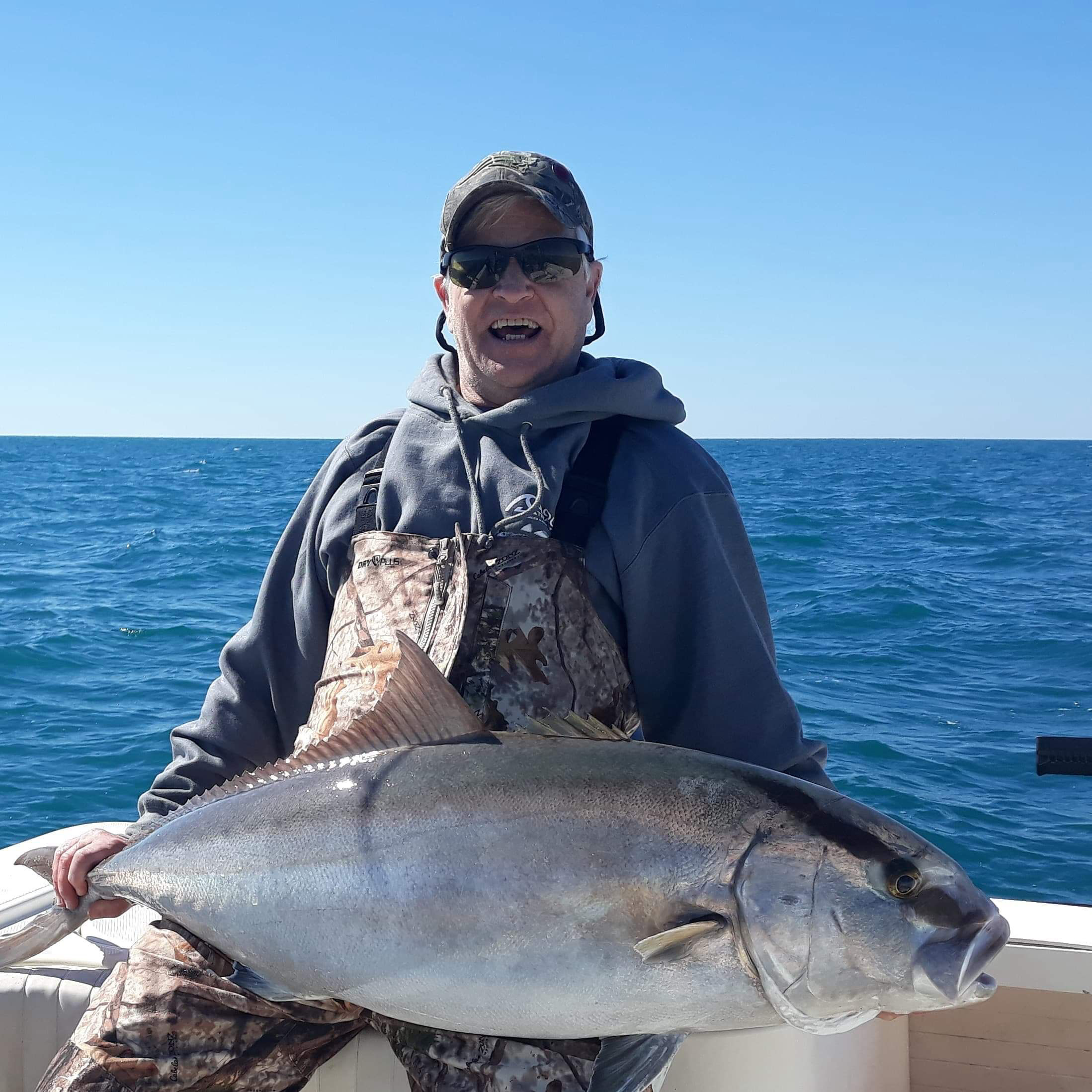 We continued drifts and Monique hooks up, then MAtt hooks up... double header! Both fish are pulling hard and running hard. Monique is the first to get her fish to see what it was, a 4-5 ft lemon shark that was foul hooked on the fin.  We did the Chinese fire drill as the fish crossed each other multiple times.. we freespooled the shark and matt worked his fist which turned out to be a bigger AJ than his first.  Monique got the shark back up and we removed the hook, sending it on its way.
We caught a couple more sharks, cudas and lost a few to the taxman (got a decent aj cut in 1/2)

We had a bunch of big hits off the bottom that came unglued, and a few that dragged us back to the wreck.  It was a fantastic day on the water with some great people.