Capt Dan Medina Posts: 795 Officer
January 2019 edited January 2019 in Southwest General Fishing & The Outdoors #1
1/17/19
Met up with a group of 5 at pineland marina for a 630 AM departure. Weather forecast was 2 ft or less. It was 2-4s, but did lay down wonderfully as the day progressed to less than 2 feet.
Shot out looking for a solid snapper bite. Got to the first spot and dropped down lines. The bite was never absolutely on fire, but we would have flurries where we would catch 5-10 fish at a time and then like a light, the bite would turn off. The tide and wind or lack there of made it a challange to get right over the spot, but we worked and repositioned as necessary to make it count.
The first few fish in the boat were some big triggerfish which unfortunately were released being out of season. A few nice mangroves started to show themselves... a nice porgy and some yellowtail joined the party. Had a few small red grouper, an out of season gag and a small scamp... Then the bite switched over to big mangroves.  All in all I believe we boxed just over 40 respectable mangroves.
Decided to call it a day and made the run back in.  Saw a nice show on the sounder in 95 ft and decided to make a quick drop/drift. It resulted in 2 nice red groupers and a handful of lanes to round out our box for the day. 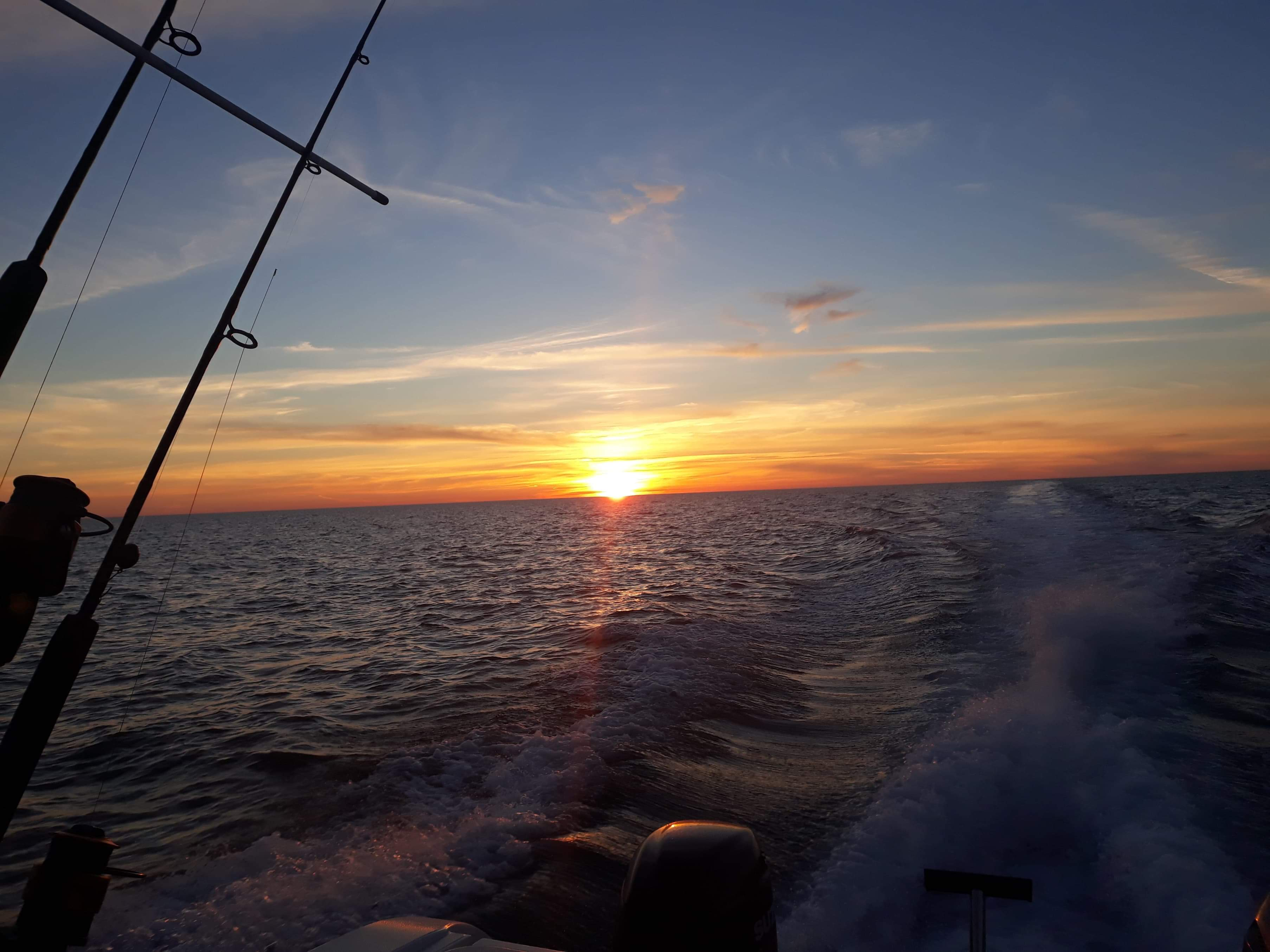 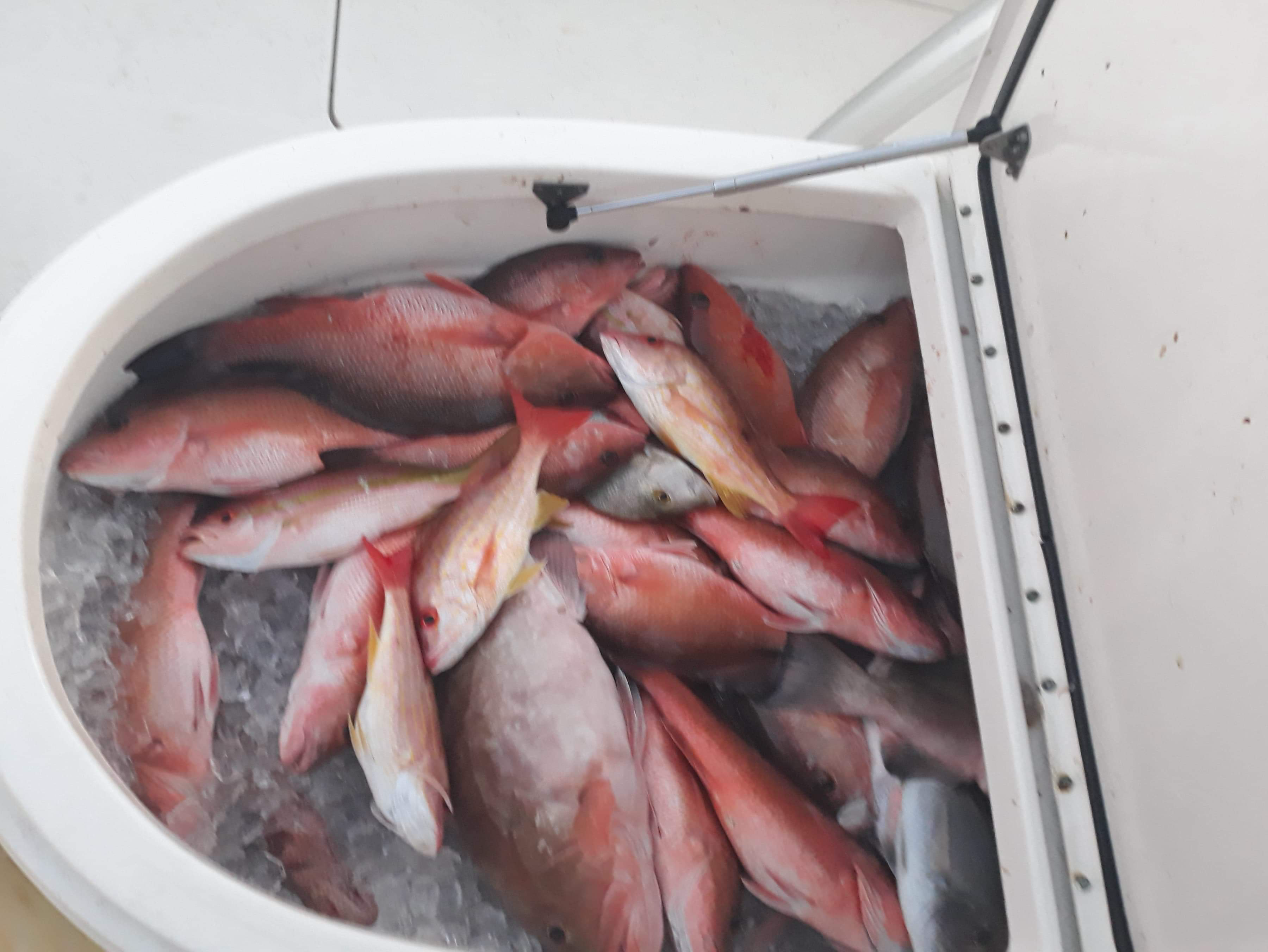 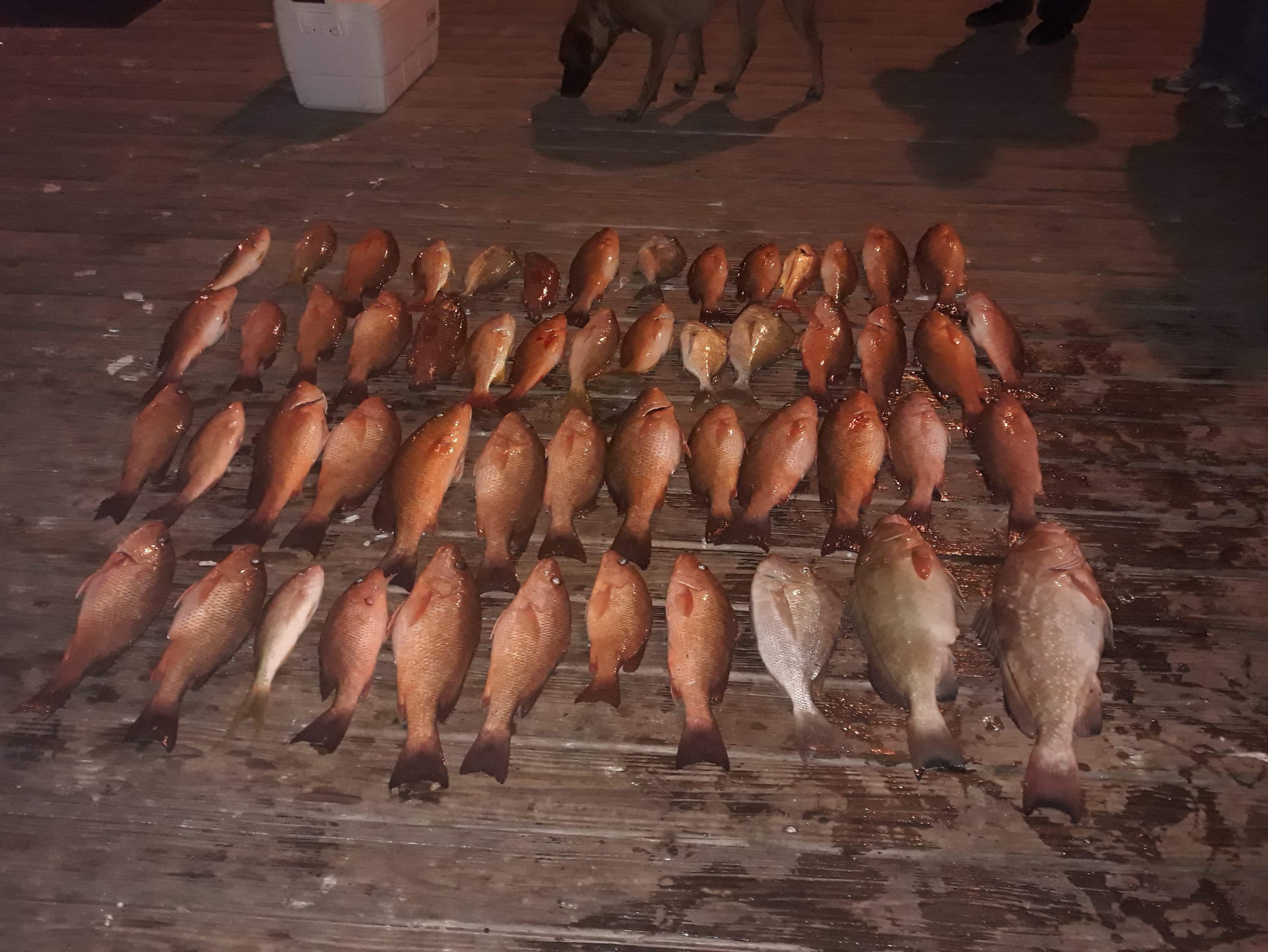 Got the fish all cleaned up, loaded the boat on the trailer which was tough at pineland due to the crazy high tides... Stopped at Hurricanes for a quick burger and to talk with the guys from the SWFL Fishing CLub.  Said my good byes and drove home... while unloading gear, noticed the prop on the starboard motor looked a little funny. turns out all 3 fins had turned in from what i presume is hitting the bottom while powerloading onto the trailer....

The trip the following morning was scheduled for a 7AM departure... I made a quick scramble, made a few phone calls to see if anyone had a spare prop I could borrow, or if there were any on craigslist. Unfortunately luck was not with me that evening. Made the call to the group and apologized, but wouldnt be able to get out with the damaged prop.

1/18/19
Woke up and received a message from another world cat owner that he had a spare of the exact same prop in his office and I was welcome to borrow it. I removed the damaged prop, made the drive to Burris to drop it off so it can get reconditioned, and met up with Jason. Talked for a couple minutes, offered my thanks and off I went. Called up the group and was able to get the trip back together for a late push off the dock, and would just stay out late for an overnighter. 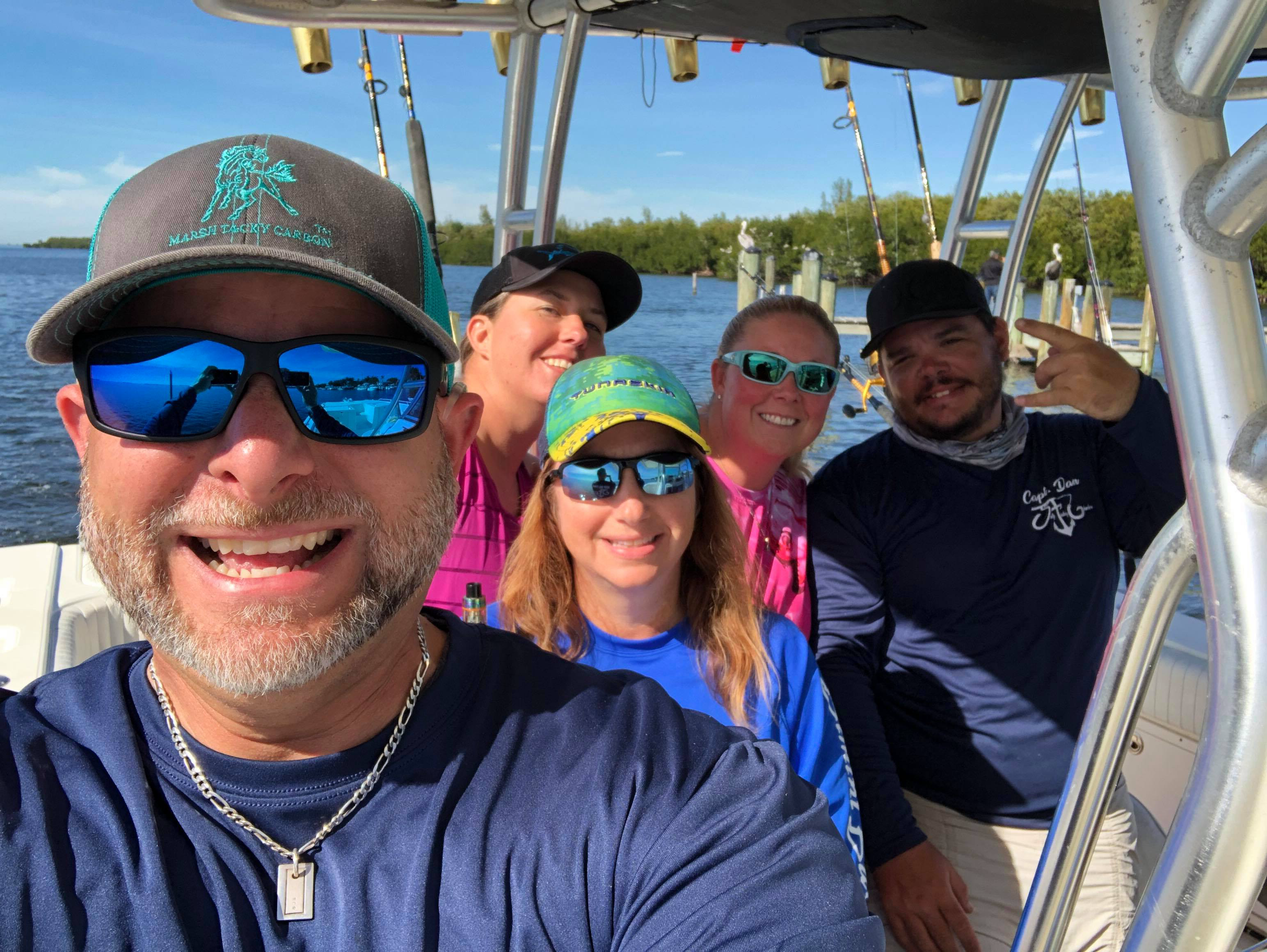 The group showed up around 145 at pineland and we set our sites out towards a wreck... stopped and picked up a well full of tomtates (spot tail grunts) and zoomed on out thru the glass like conditions. As we neared the wreck, there was a boat already on it, totally throwing off our game plan.  We worked around the area for a while within 3 or 4 miles, picking up some lanes, a legal red grouper, and found the largest school of pinfish i've ever seen.  We would drop the sabiki unbaited and pull up full stringers every time.  loaded a good 3 dozen or so of them with the tomtates.
Waited for the sun to go down , and it was apparant the other boat was planning to stay the night, so we switched up our game plan.  We started making our way out deeper, making stop on some decent shows. There was absolutely ZERO current. We would try to drift and literally be with10 feet of where we started after 10 minutes... We kept on pushing, waiting for the tide to turn.  It wasnt till about midnight when we pulled up on our end destination, and the tide just started to move.
I gave everyone the warning that this spot was no joke, to be in the ready position as there were some BIG girls here. First drop/drift, the baits hit bottom and all 5 rods double over... 3 are immediate break offs, My fish pulls off my bait, and Lee stays hooked up... After a solid battle with some serious drag pulling, up comes a toad of a GAG grouper, measuring in at 40". 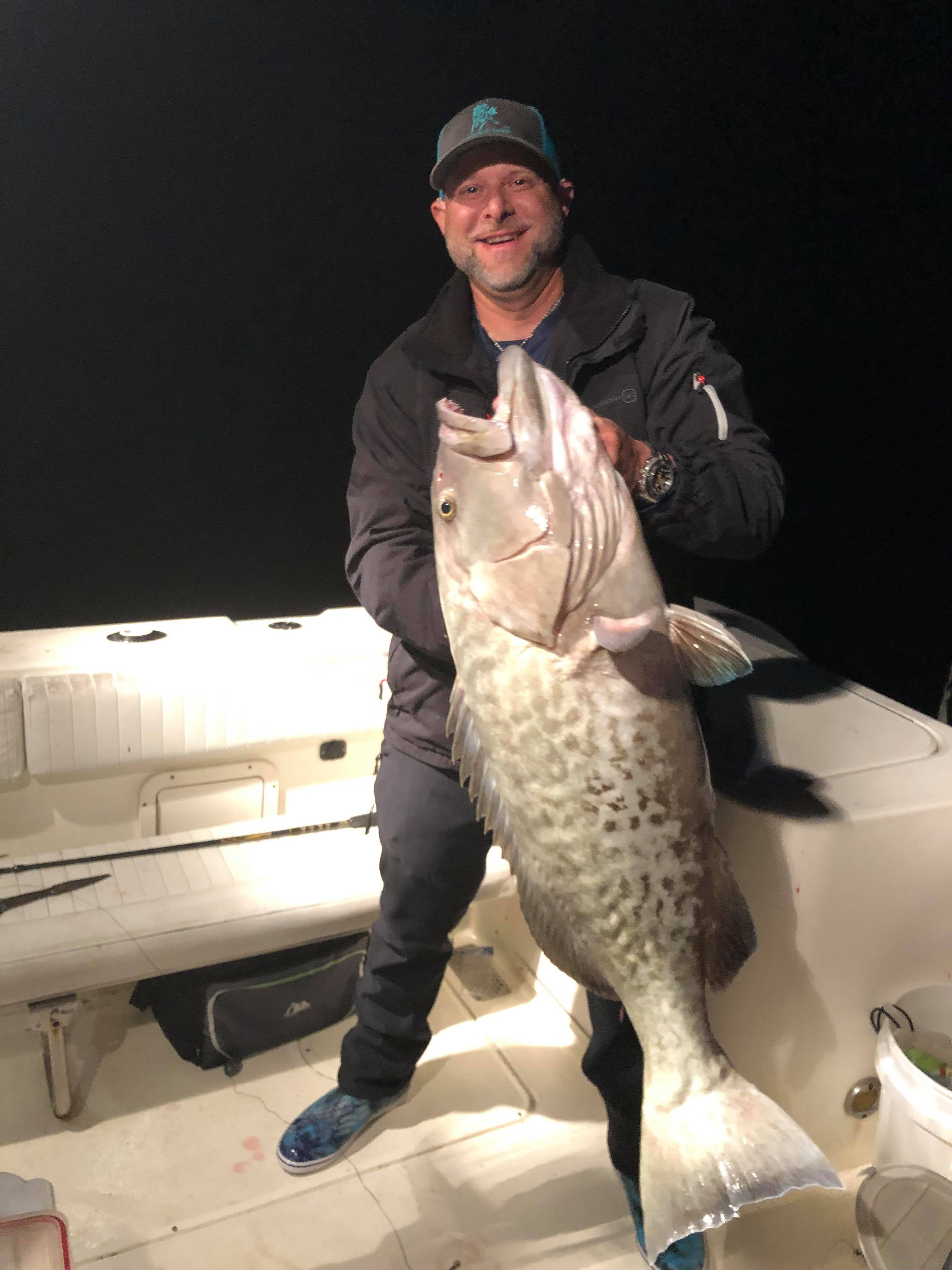 We repeated the drift, with some big ARS coming up along with some solid red grouper. I dropped down a pinfish and it is immediately inhaled... Worked the fish up and it was a solid gag at 36". 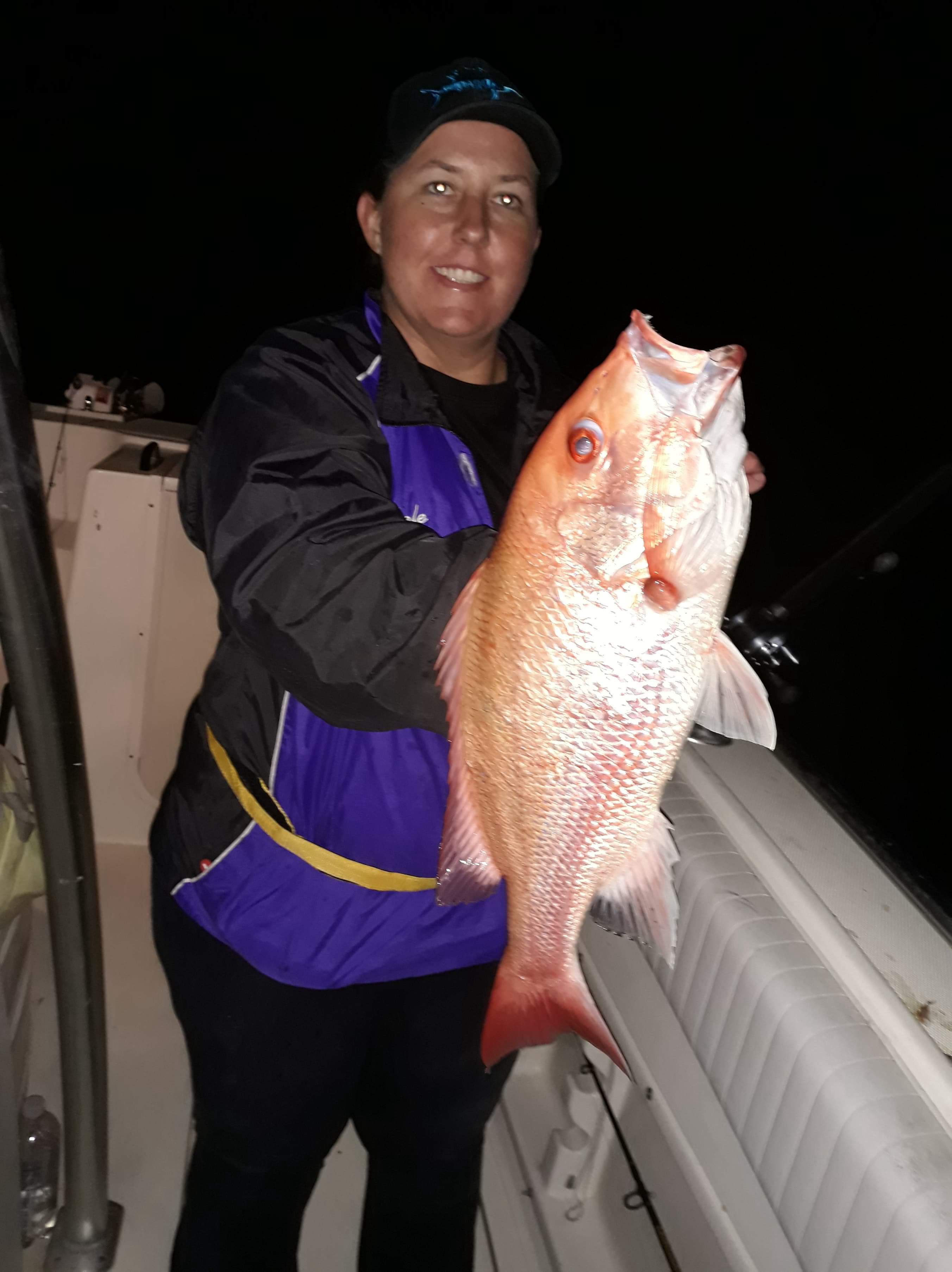 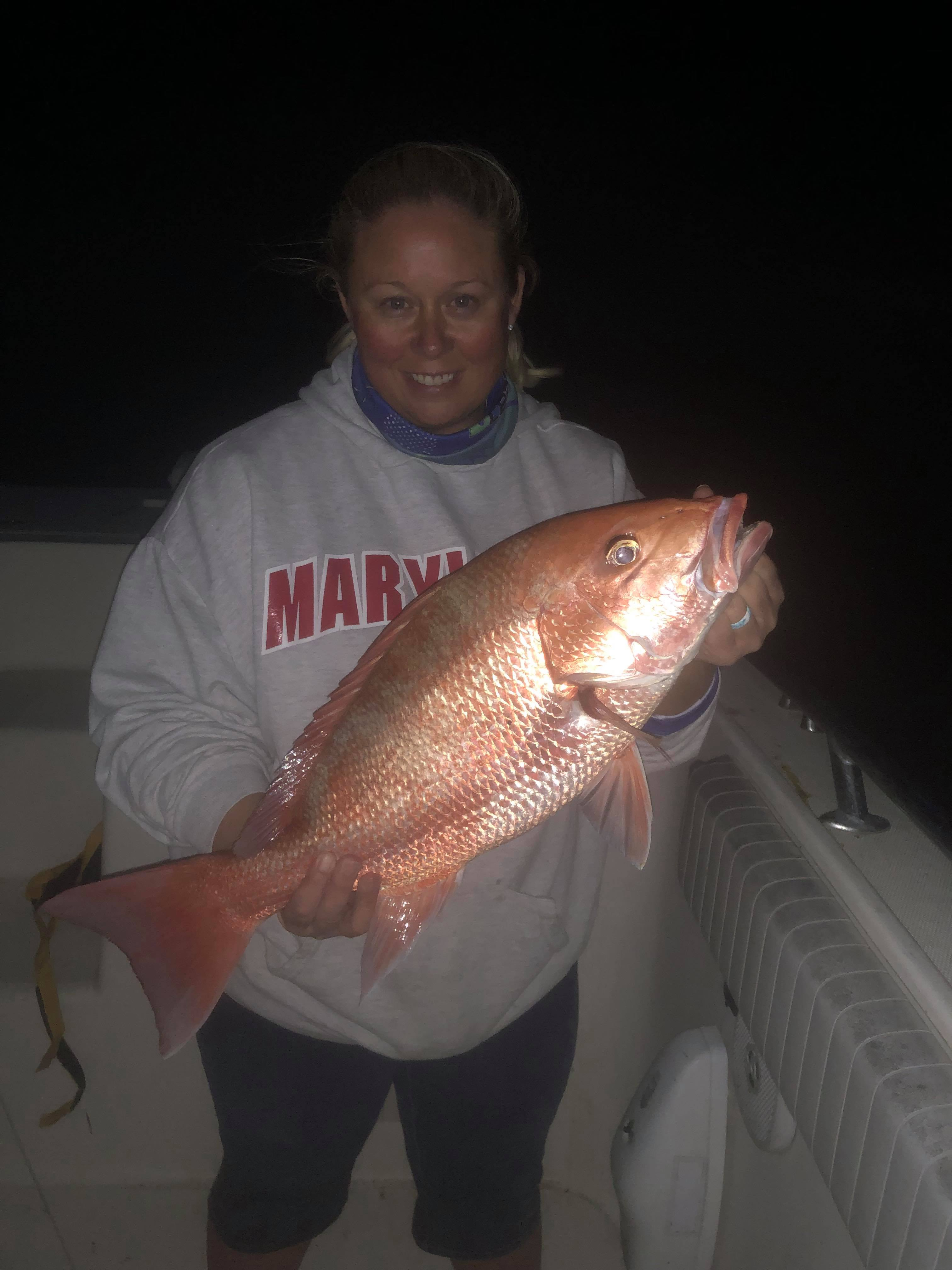 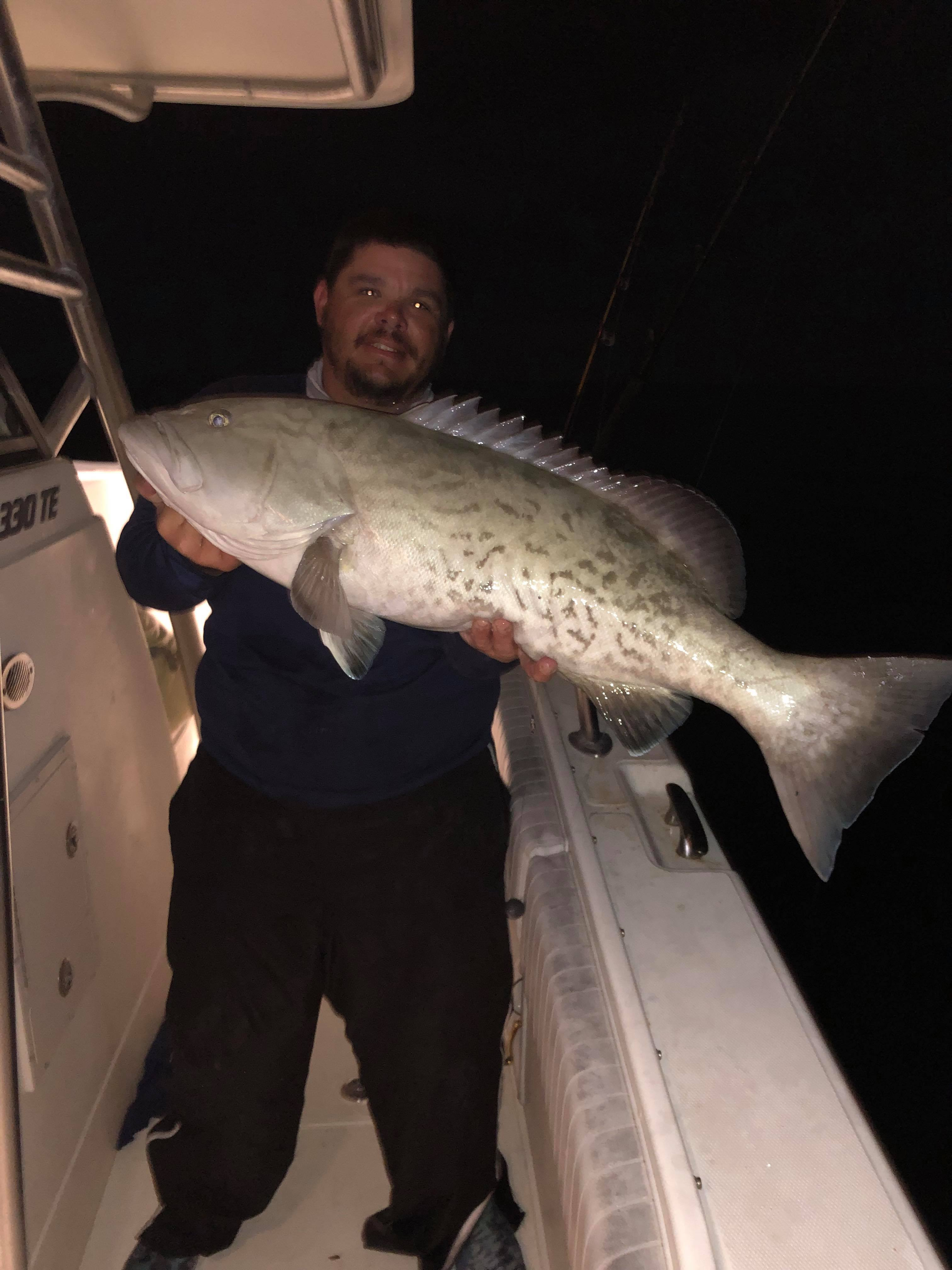 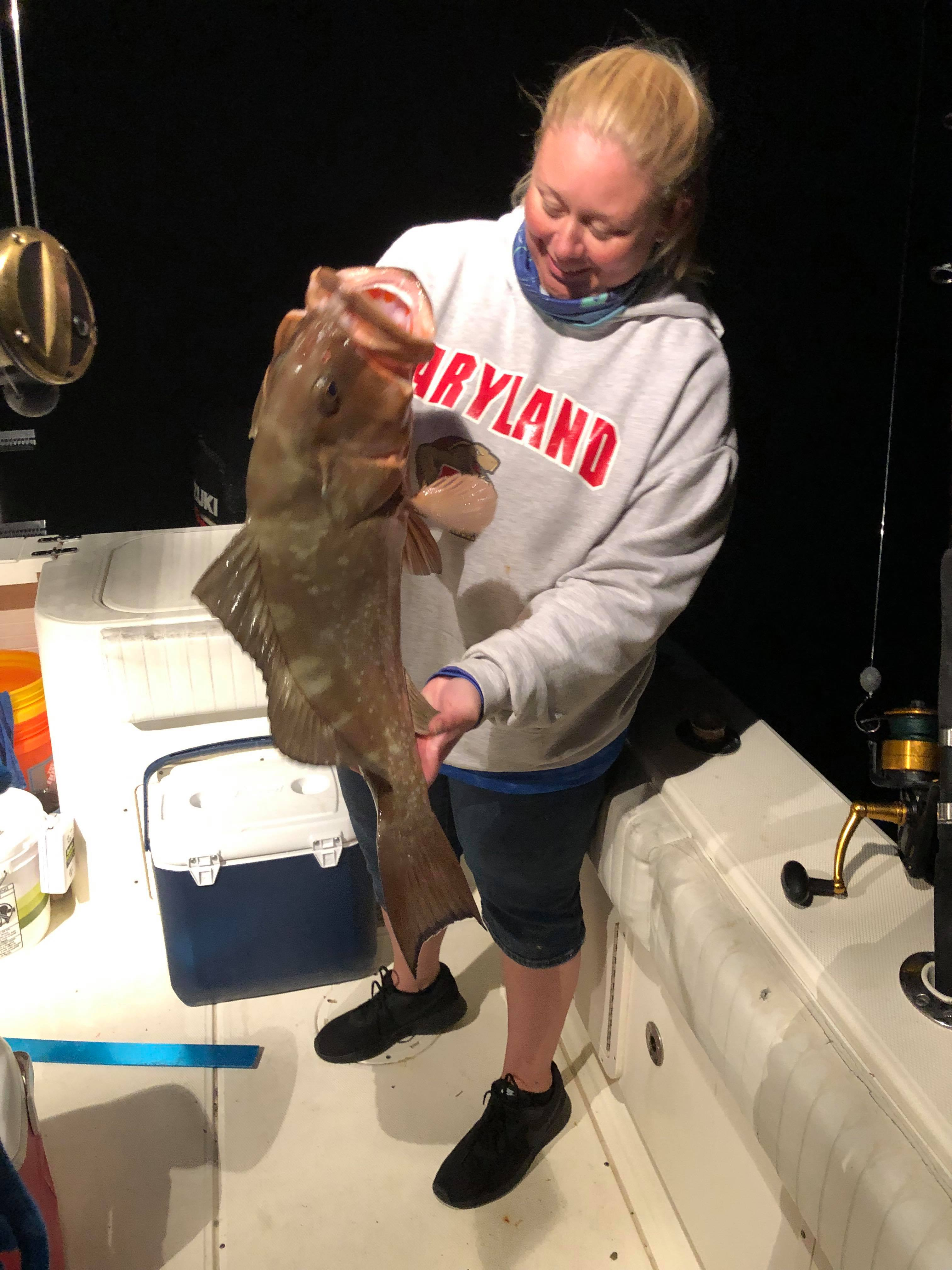 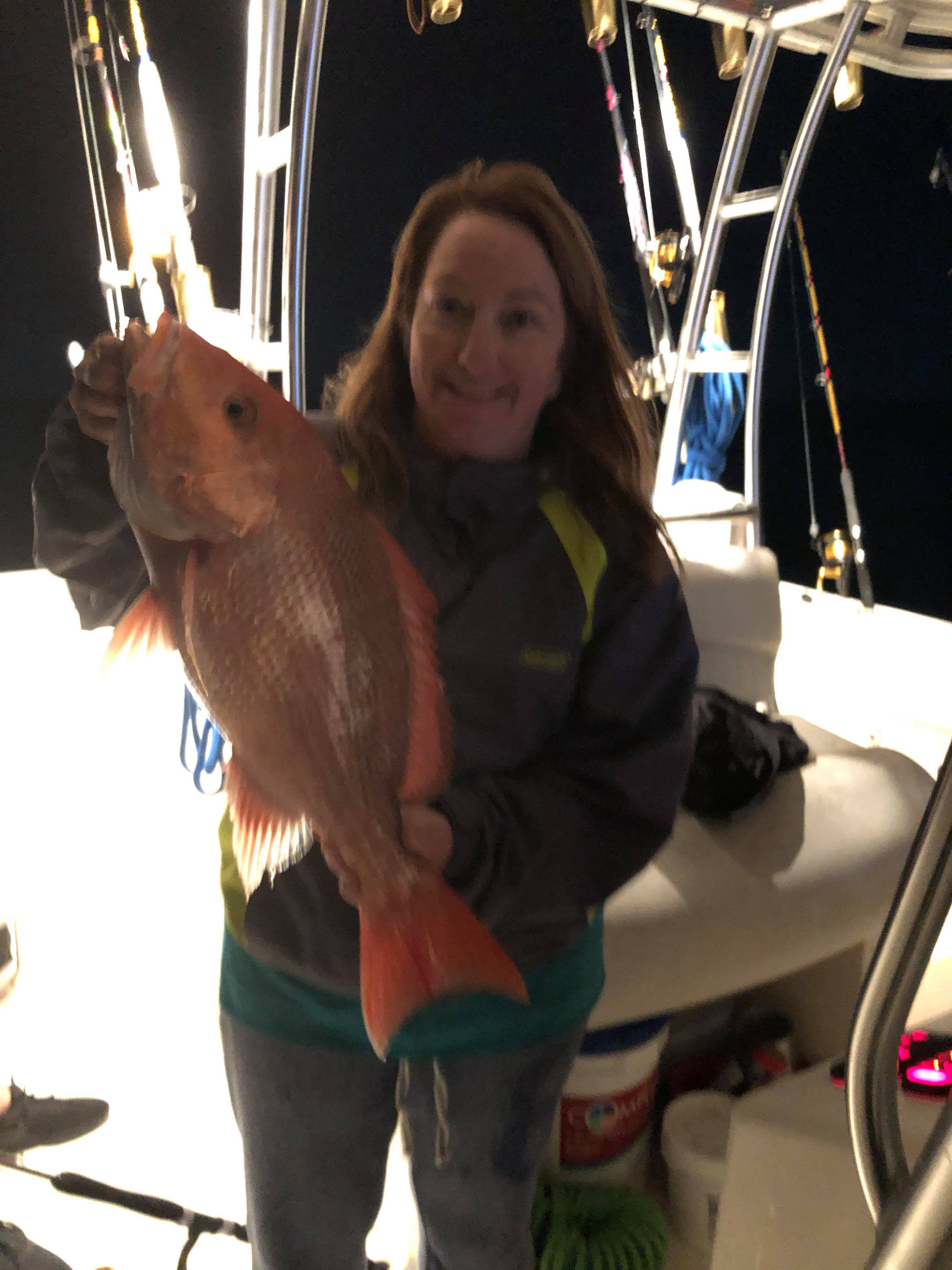 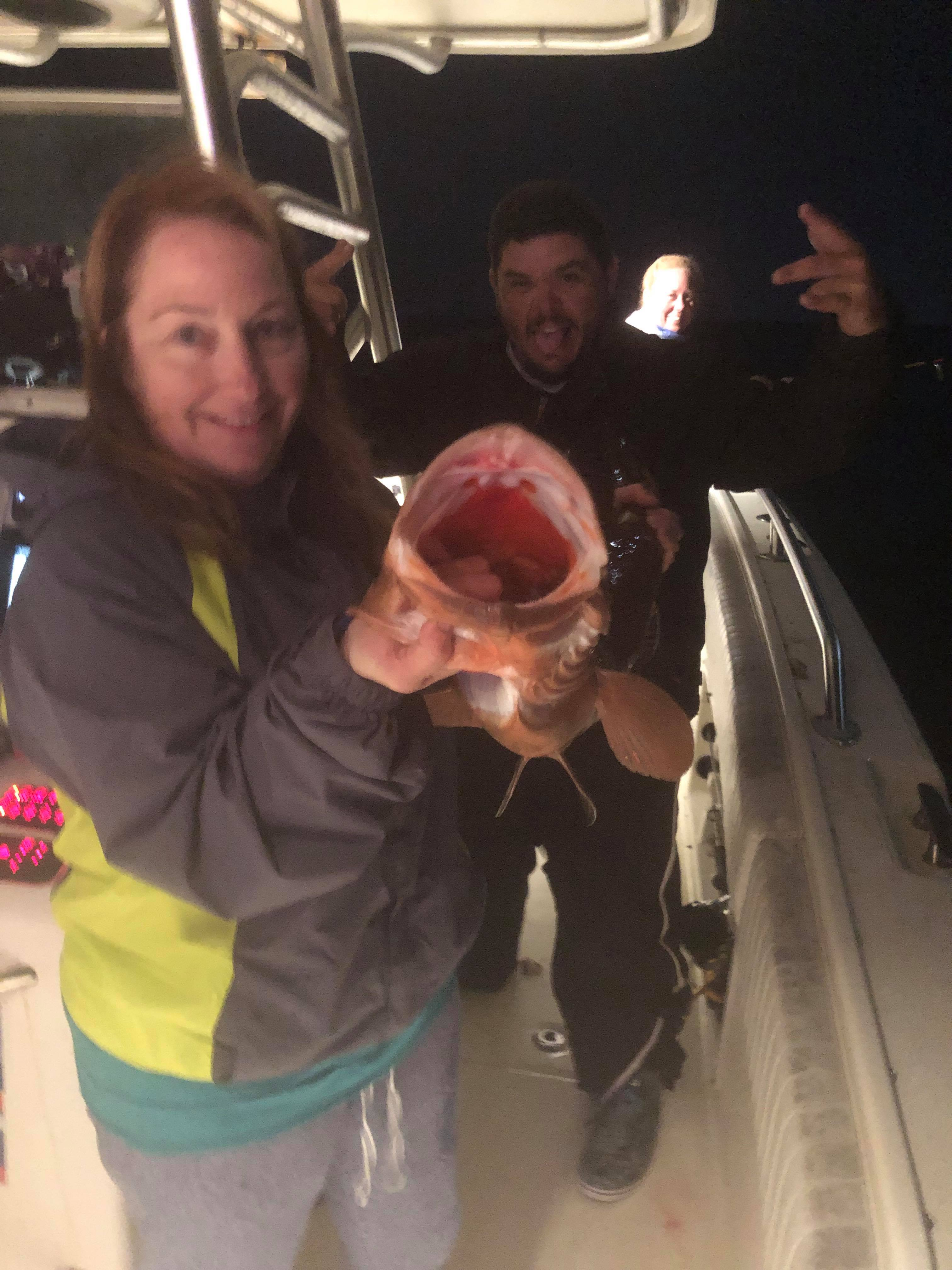 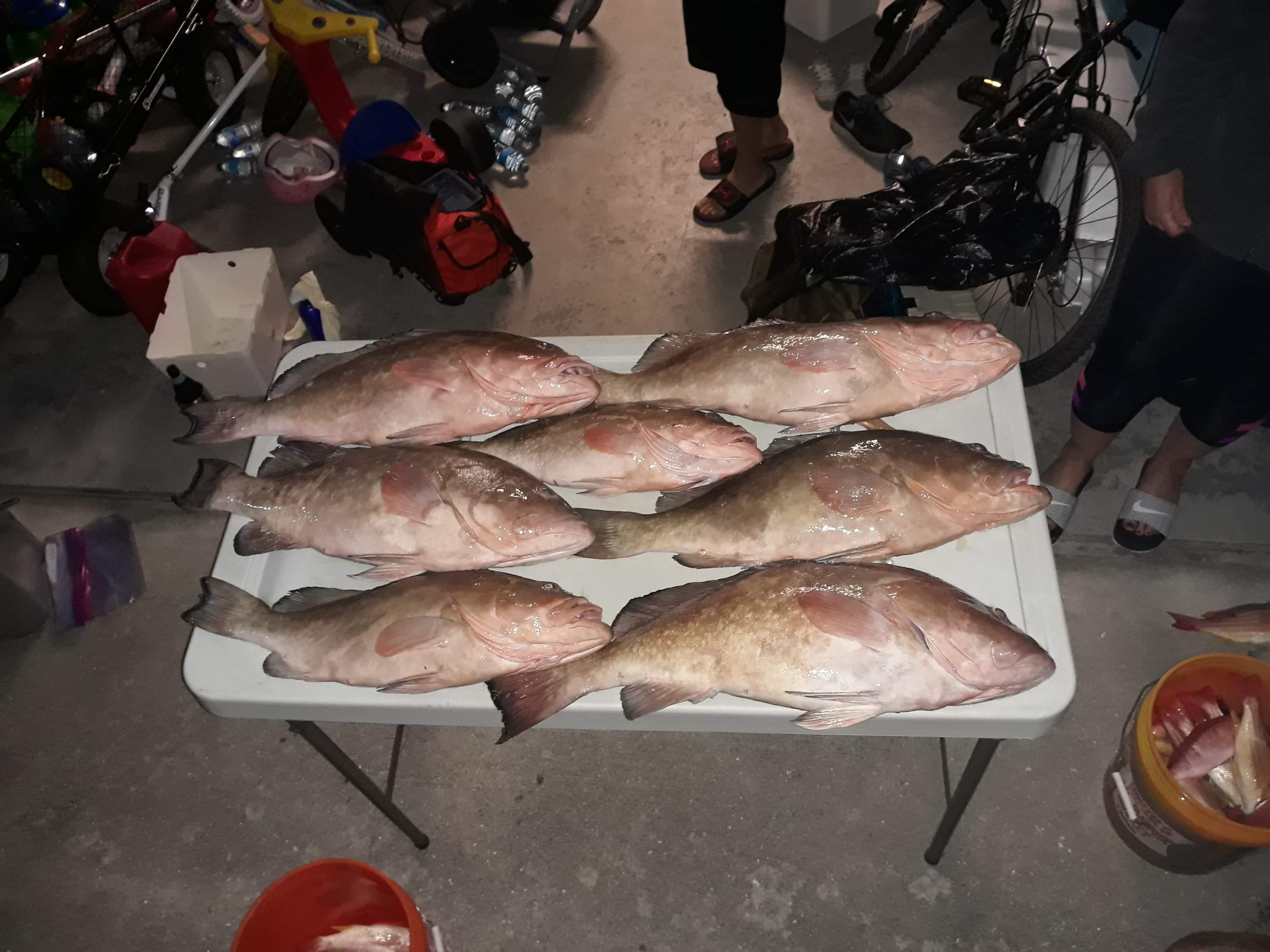 Continued the drops and drifts with quality fish coming on every drop. Lots of throwback american reds, a cooler full of nice red grouper, and a few thumps that came unglued.... It was an absolute blast!

The bite stayed pretty consistent as long as the tide was moving. We decided to make the run back in around 3AM. The winds had shifted and the air temps were dropping... It was a long run back to the barn, but oh so worth it!

Look forward to some calmer weather to do more trips like these!