I didn't realize how long the review of the houseboats was so here is a fishing report of the same trip as a follow up.

When we arrived out at the houseboat the first night I set up some shrimping lights and used a few lady fish caught while the boat was anchored up for bait. Every bait in the water that wasn’t shrimp or crabs was eaten by a shark within a few minutes. There must have been a ton of small sharks in the area and we caught our fill over the next few days. We had a hard time catching anything but sharks and catfish but it was a fun way to kill time when we were at the boat. Another positive from fishing from the house boat was that there was a big school of small pilchards around. I would put out chum every now and then and cast net however much was needed for the days fishing which made it really easy when we wanted to fish bait.

The first day we fished the outside and hit creek mouths up and down the cost. Fishing almost exclusively Cajun style popping corks with a double rig of Vudu shrimp and a lead jig head and gulp we caught at least 20 reds, 30-40 trout, and 20 or so snook. Most of the reds and snook were very small but one big one really made the day on a jig head and gulp shrimp combo. That night we took it easy and got ready for the next day. 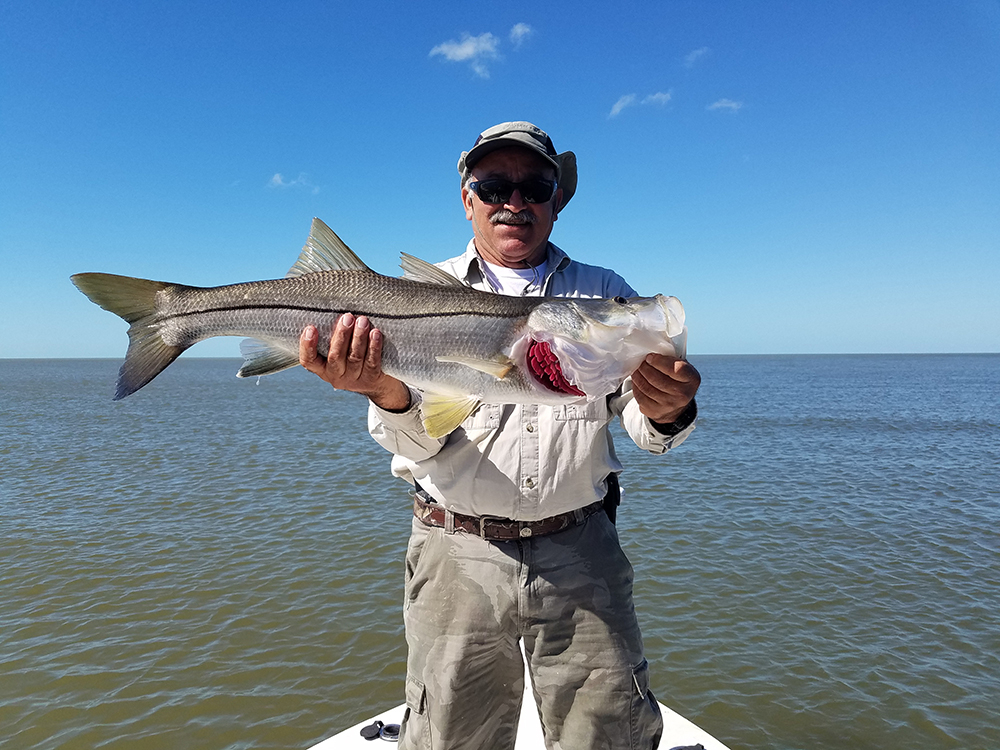 Saturday we wanted to run way up in to the freshwater creeks to see if they moved in there with the cold weather and 65 degree water. We ran up into Tarpon Bay and spent the day catching a few small ladyfish, jacks, and 3 snook but not much going on in there. On the way out we fished the mouth of the Harney River at a very low tide and caught a bunch of trout, small redfish, and various trash fish to end the day.

That night after dinner, my brother and I decided to see if the shrimp were running out of the Shark River. I wasn’t able find any reports of people shrimping there, probably due to the dangers of running around at night. After a long run in the dark, using my GPS and tracks made from the days fishing, we made it to the mouth of Shark River an hour after high tide started dropping. To my surprise there was little to no tidal flow. We then worked our way south hitting each large mouth/river exiting into Ponce de Leon Bay but still same result, no tidal flow. I was about to give up and head back, then decided to run to Little Shark and hit the jackpot. The tide was ripping there, not even ¼ mile from other areas with no flow. We anchored up around a point and caught as many shrimp as we could dip for the next 3 hours before calling it. The shrimp we caught were not very big, but consistent action through the night. We didn’t fish hard but had bait on top and one on the bottom the whole time and only caught catfish, despite hearing tarpon and other fish busting shrimp on the surface. I tried cleaned blue crab on the bottom like we used to use for big black drum in Mosquito Lagoon but it just got picked clean and no bites.

The final day we had an amazing morning with perfect weather fishing gulf beaches and river mouths with lots of the same, small reds/snook and good sized trout. There was one good sheepshead mixed in and I lost a really nice snook that decided to bite while I had the rod between my legs untangling my brother’s bait from a downed tree. To finish the trip we ran out to the crab buoys and got our limit of nice sized triple tail in less than an hour. I’ve never seen so many good sized fish out there and the calm winds made it very easy to see.

We had a flight to catch and just enough fuel to make it back to marina so we called it a successful trip.