John McKroid Posts: 1,982 Captain
January 2019 edited January 2019 in General Paddle Craft #1
Last weekend was Extreme Kayak Fishing Inc's  Sailfish Smackdown.  The date for this tournament is set up months in advance, making it challenging to predict if the fish and weather will cooperate.  Although some Sailfish are local, the majority are in migratory schools, spawning each year off Isla Mujeres, near Cancun in Mexico, and then wandering up the Atlantic coast during the Summer months.  The winter cold fronts drive the fish in packs South back down to the spawning areas.  Reports indicate that a major body of Sailfish were recently off Jacksonville Florida, with some power boats releasing up to 40 fish per day.   Unfortunately this body of fish has not made it down to Pompano Beach yet.

Weather was too rough for the participants to compete on Saturday.  On Sunday, the weather was a little sporty at first light, but turned out to be nice later on.  Approximately 45 anglers participated in the competition.    Although there was a lot of life in the water, fishing was tough for the kayak anglers who were not allowed to use wire and therefore incurred many bite offs from toothy critters.  About a dozen Sailfish were hooked, but only two were landed.    Congratulations to the Robwil Valderrey for winning $5000 by catching the first Sailfish ! 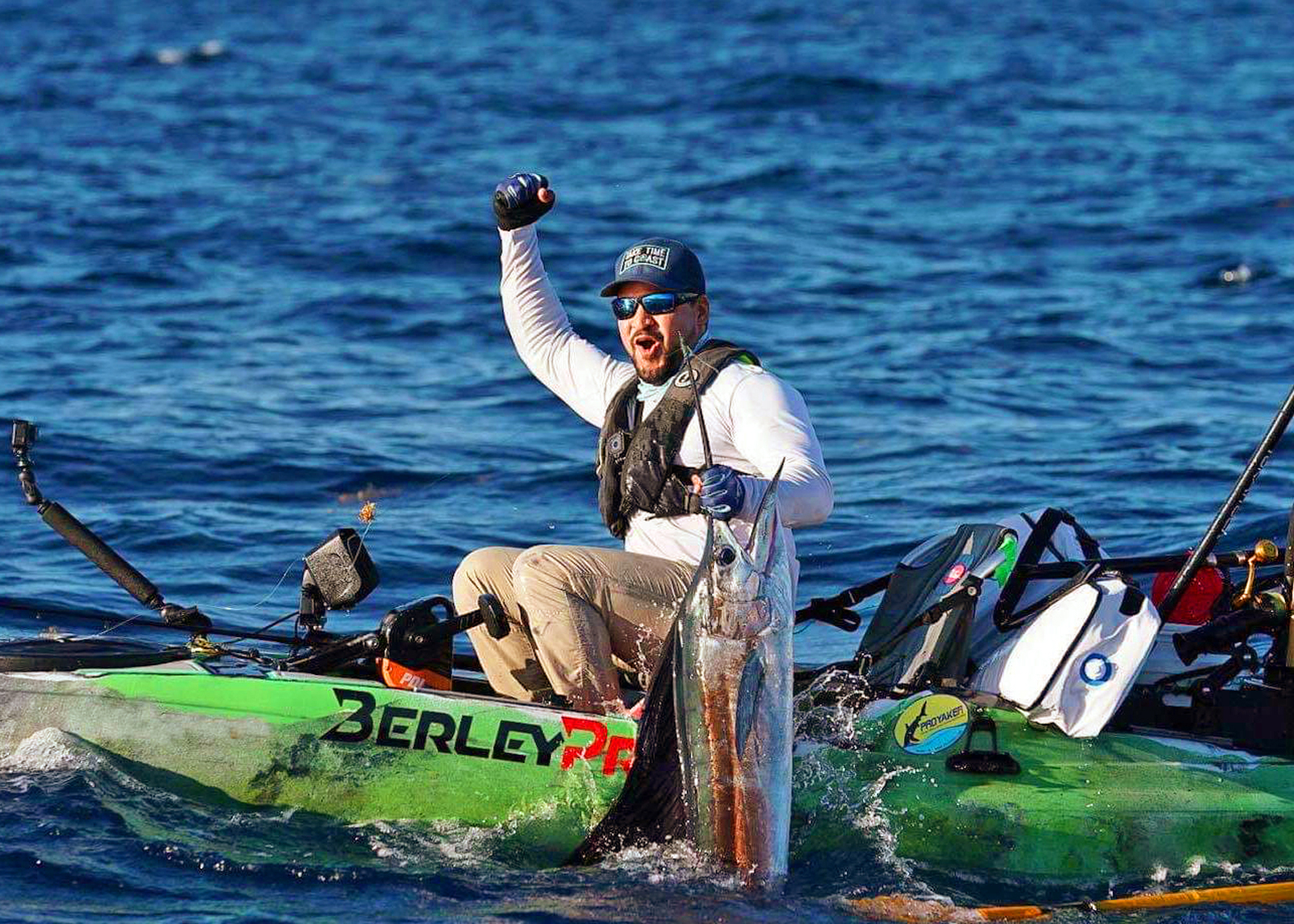 and with 3 minutes before lines-in, Shaun Roles won $2000 with the second Sailfish of the Tournament. 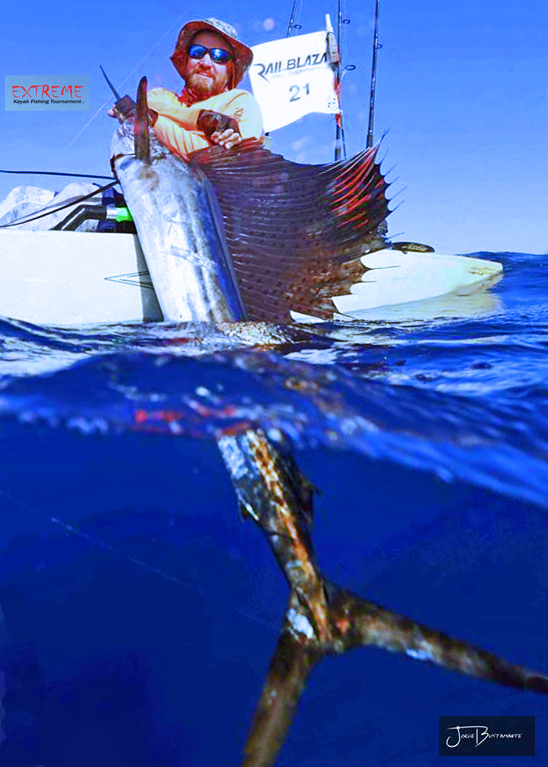 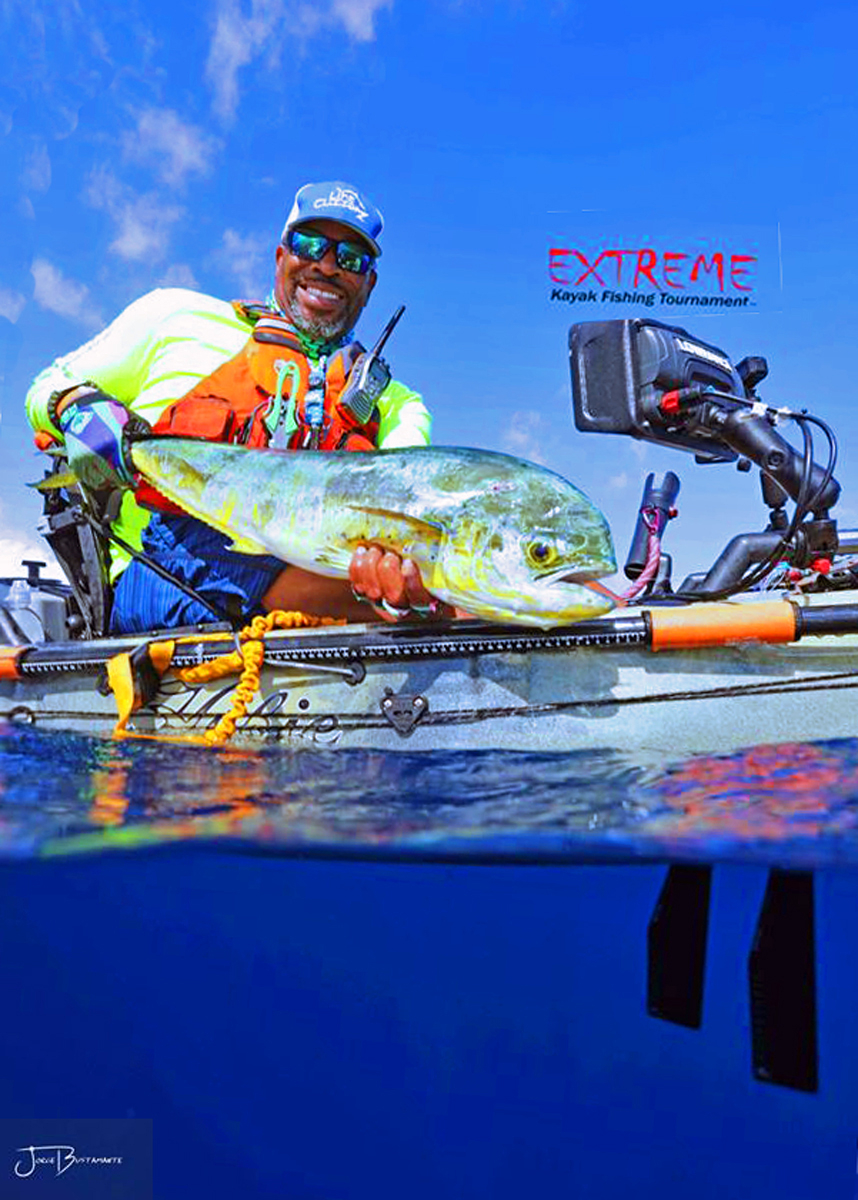 First bait in the water produced this contender king Mackerel which I had hoped would win the Kingfish Calcutta. 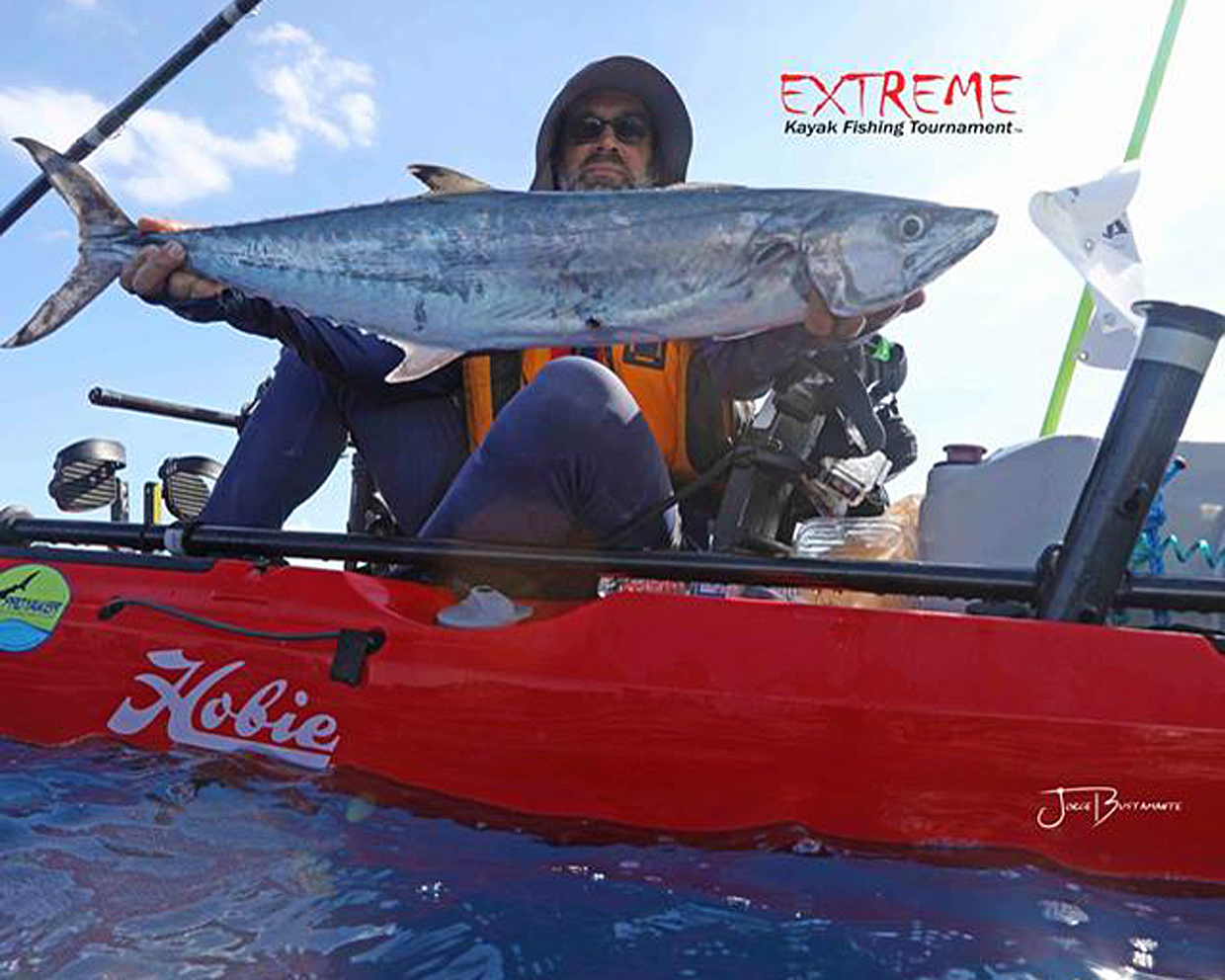 During the last hour of the Tournament, I heard a radio call from a yellow kayak with a yellow flag.  At the weigh in scale, I learned that this was the kingfish to end my Calcutta winning streak.  Congratulations to Brian Nelli for winning the $1200 Kingfish Calcutta. 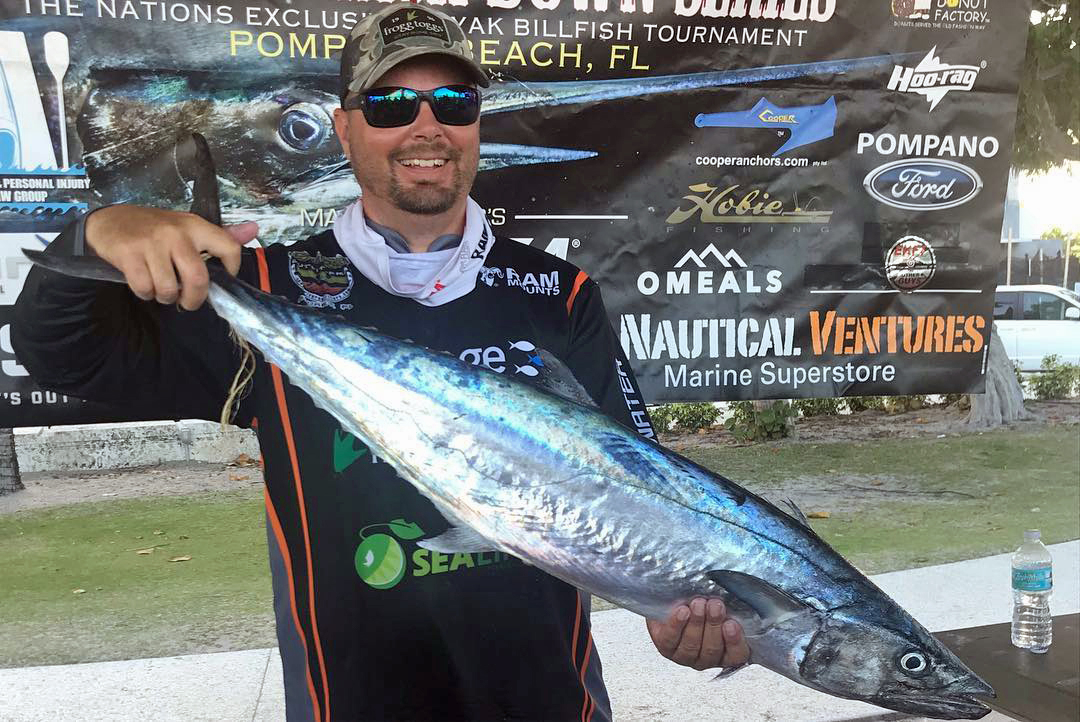 Free hors D Orderves and Papas Pilar Rum cocktails were served up at the Beach House Restaurant  Awards Ceremony.  Congratulations to all the winners ! 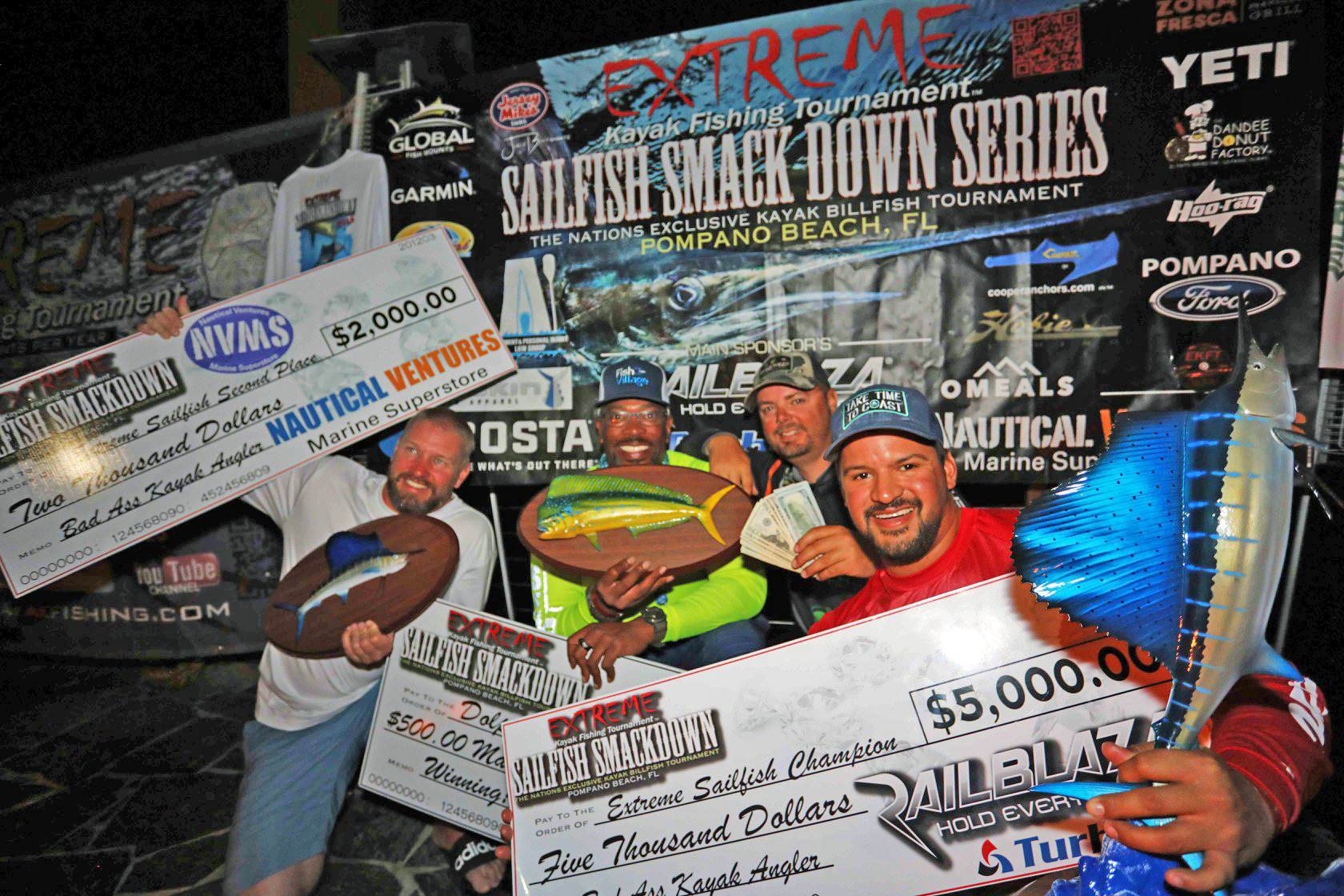 Special Thanks to Extreme Kayak Fishing Inc and all of it's sponsors for supporting and executing a World Class Sailfish Kayak Fishing Tournament.   Thanks to Denes Zsakacs and Jorge Bustamante for many of the photos used in this post.
https://www.extremekayakfishingtournament.org/sailfish-schedule.html