Good to have Friends

Sorry for the lateness of this report just been a real busy week. Once again, I started the trip with no live bait as the Red Tide is still an issue around John’s Pass. As there is no trip this weekend I am hoping for dramatic improvement by next weekend. I miss my Pin fish. Not only as bait but I enjoy catching them and it just has become part of the process for me.

As this was a Full Moon 44-hour trip we left at 10:00 AM. The conditions where rough from the start with white caps before we cleared the jetty. In spite of the conditions the trolling on the way out was decent. Spanish Mackerel were caught in abundance as well as scattered Kings.  No Tuna on the way out but some were landed between spots once out there as well as a Dolphin.

We started in clear windy conditions with seas 5-8’.  The Mangrove Snapper bit from the start.  They never really chewed but were steady through the night and much of the day. Most experienced anglers caught their limit Because of the conditions less experienced anglers were either in the bunk or dealing with their lack of “sea legs” For this old “Salty Dog” the picken’s were good.  So good that before day light I was throwing back the smaller but legal Mangos.

Tip: I fish most often on the bow which can be a challenge in rough weather. I have developed several techniques to over come these challenges. First you must hold your rod higher than usual.  This will enable you to ‘bob” with the waves. This less your sinker moves the better.  Next if the wind is blowing so hard (which it was) that your rod is shaking like a leaf on a tree, keep your line slack and hold it between your thumb and index finger. This will let you feel the bite. When you do just wind. The harder the current is running the more difficult this technique is but it can be mastered with concentrated practice. If you see me on the boat just ask and I’ll show you.

Day break usually means the Snapper quit biting. This day they may have slowed a bit but not much. The morning stops consisted of Mango’s, scattered Gags and a few AJ’s. Although there were a number of Gags caught, I never got hooked up. I did catch fish on every stop including one were I got slammed by what I thought at first was a nice Gag. Turned out to be an American Red Snapper that had to be 20 lbs. or better. Sorry no picture as I wanted to get him back down ASAP. He looked like he was doing well so perhaps we will meet again.

In the afternoon Capt. Bryon said we were going to make just over an hour run to some big ledges where he hoped we would find some “Monster” Amber Jacks. Sure enough on my first drop BANG! Big Fish ON! I knew it was a big AJ. I also knew I had little chance of getting him as he ran down and then under the boat to the other side.  I just couldn’t get him through all the lines. This would happen to me four more times over the next couple of stops.

As this was the last trip of AJ season, I was hoping to land a nice one. Since I was out of live bait and didn’t feel like Jigging (which by they way was successful for many during the trip) I figured I’d target a Gag with big Threadfins.  Couldn’t get a Gag but did land some nice Goozers.

Between stops one of my friends told me he had a couple of live baits he wasn’t going to use so I grabbed them. Look out AJ’s its not over yet. On the next stop I was blessed to get slammed twice and even more blessed to land twin AJ’s both in the 40 Lb. range Good fishing, good friends and a good boat in bad weather, life is good.

Time to be pushed home by a following sea. After all the fishing aerobics I’d done on the bow I was ready to head home and catch some bunk time! 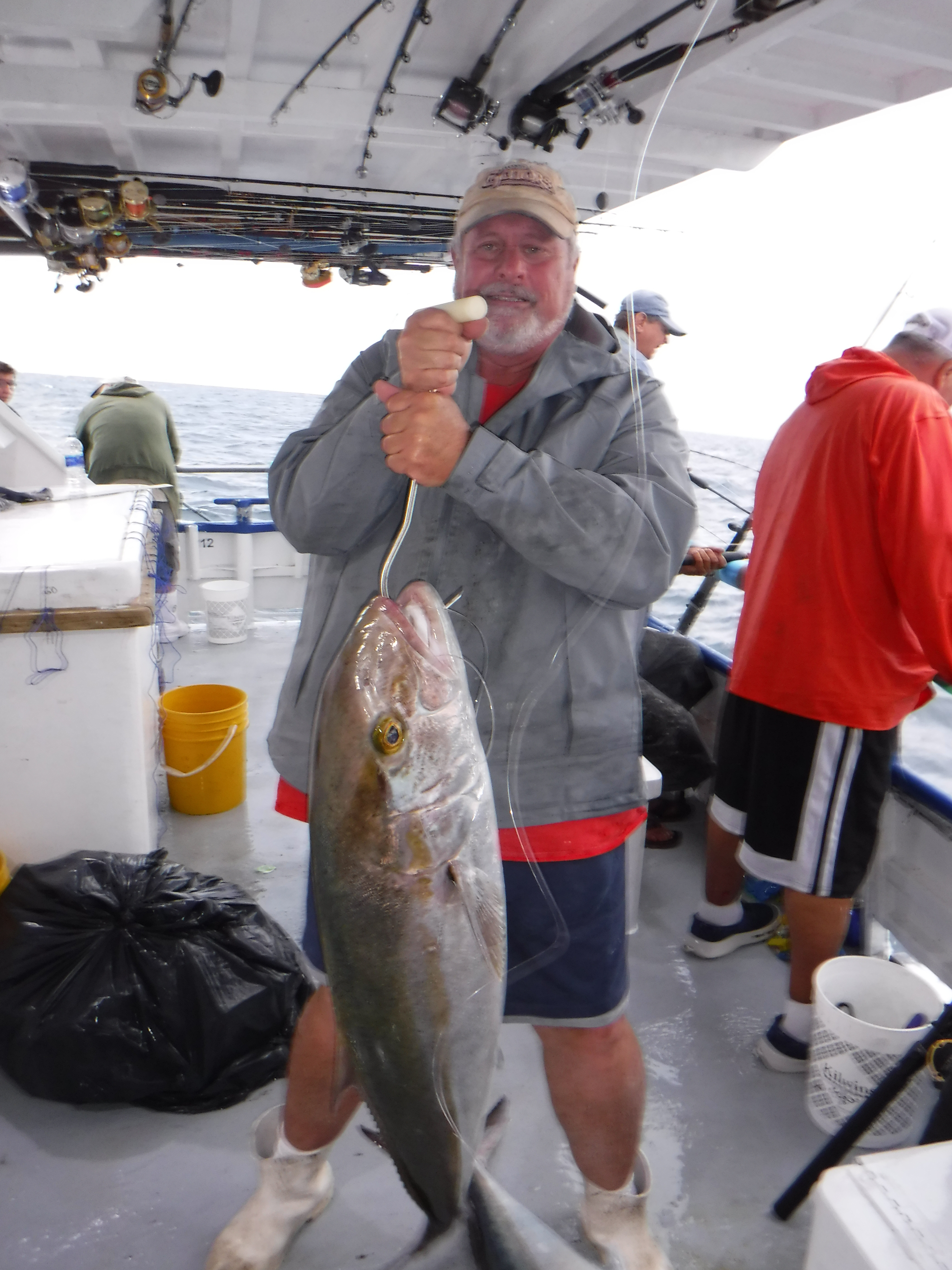 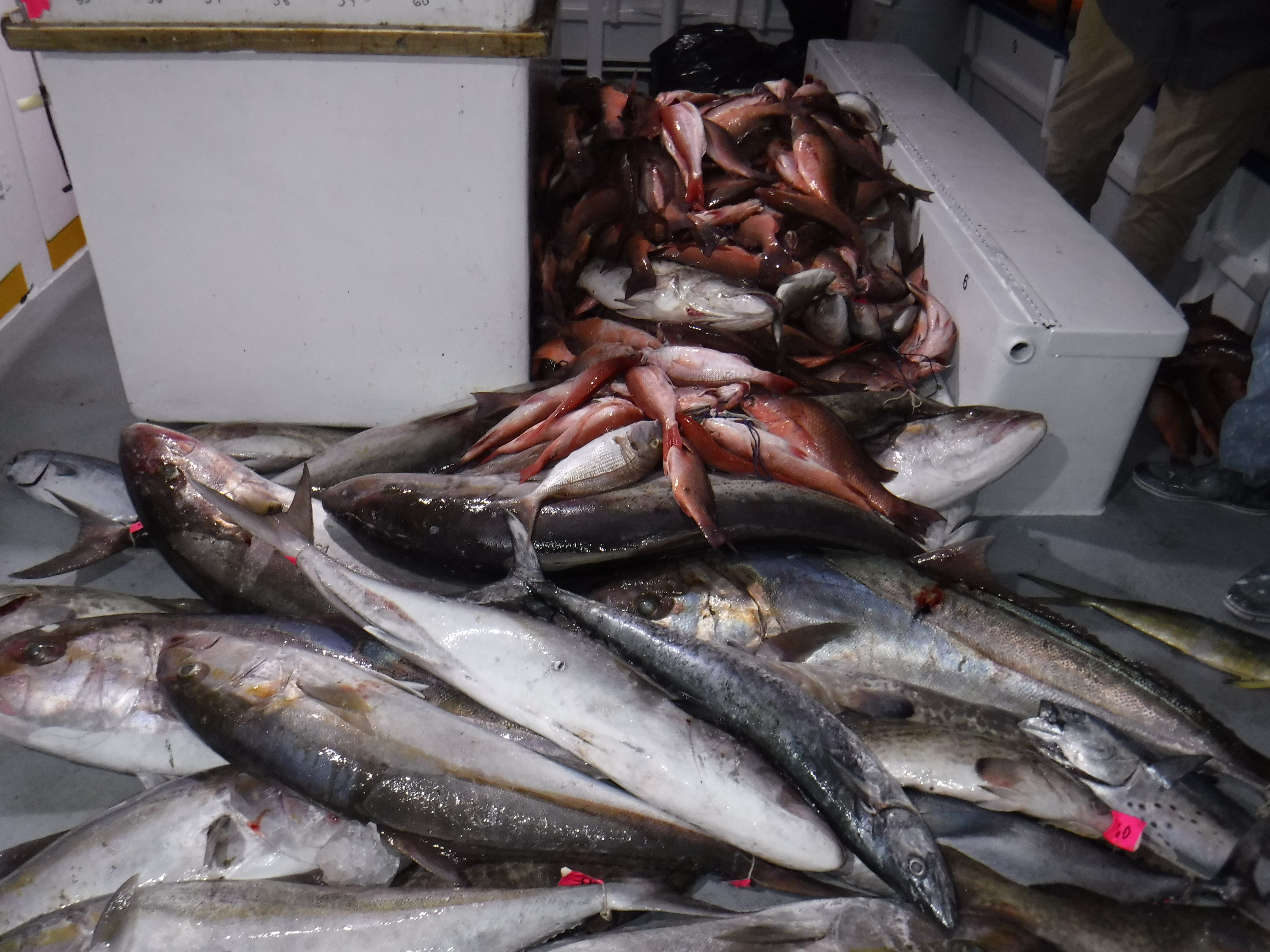 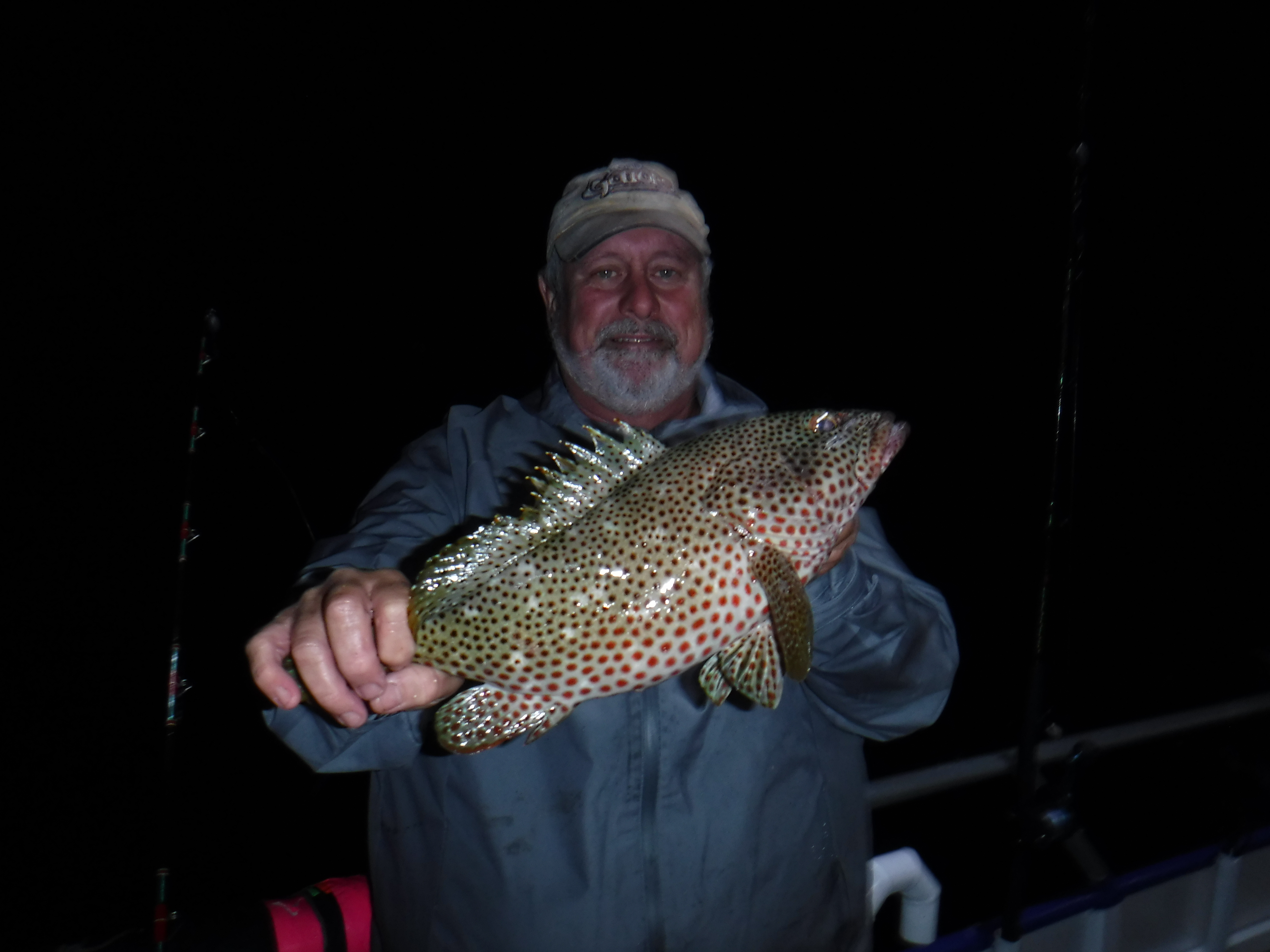