The weather forecast was an extreme 11 - 15 mph winds for most of the day and a 2.6ft sea at a 4 second interval with a high percentage chance for rain.   On top of that, those who pre-fished the event learned that the current was running up to 5 knots in 250 ft of water. The current off Pompano Beach gets faster with depth.  When the current gets over 3 knots, it's difficult fishing.  After drifting through an area, one must peddle in shallow to get out of the current.  Once out of the current, it becomes feasible to peddle south again before going back out to the fishing zone for additional drifts North.

Saturday morning the surf was big enough for a few anglers to capsize. Tournament Staff -- Marco Lasparillo and Kirk Escuarge were helping anglers through the surf. I also spent some time helping a few of my colleagues through the surf as the event did not start until 7:15 am. 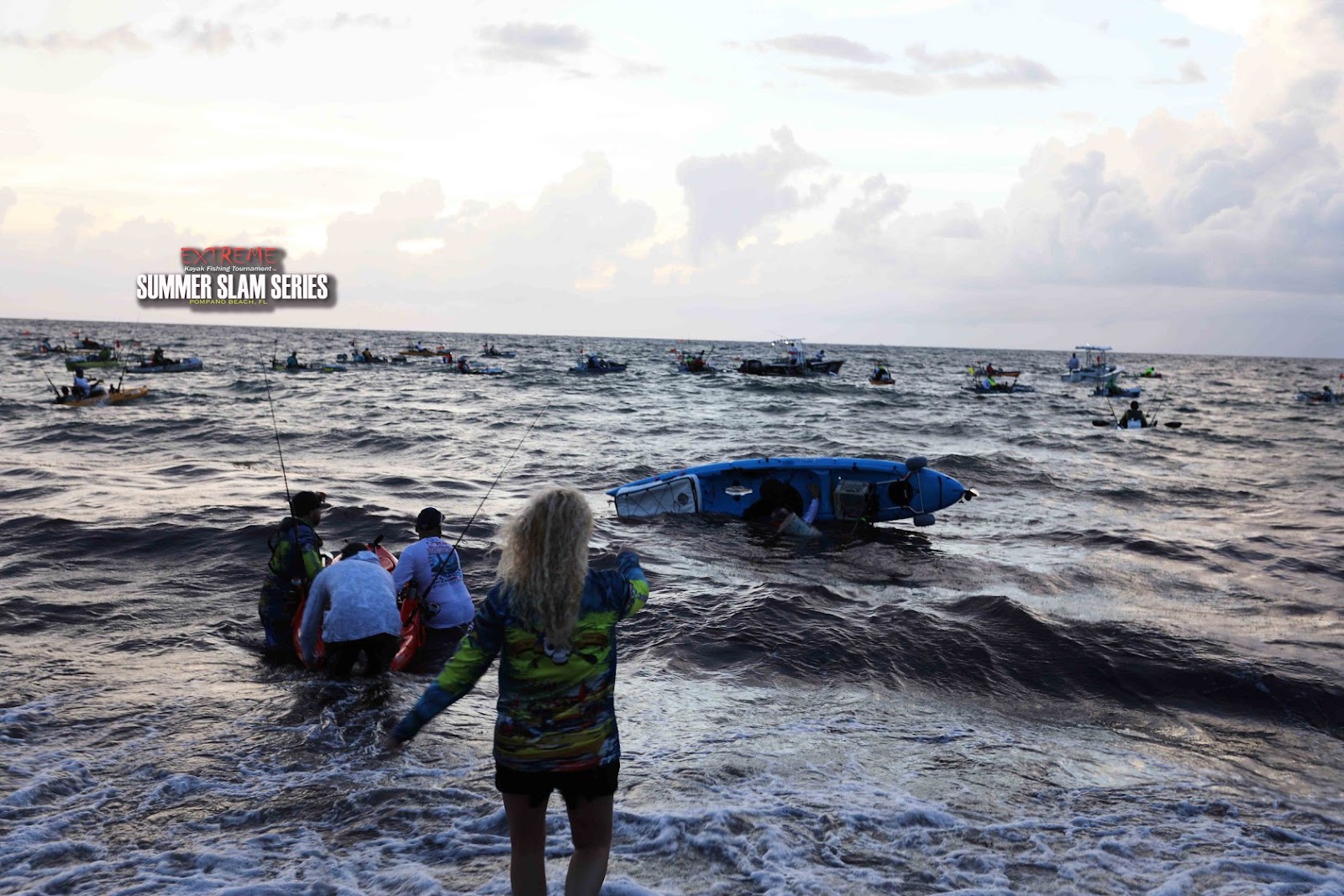 While arriving at the bait boat, their live wells slid to the starboard, causing a severe stability problem.  Because of the bait boat’s mishap, crucial fishing time was lost, and I did not head out until 07:33 am.   On the peddle out I saw 3 different incidence of King Mackerel skyrocketing on bait in the area I planned to fish. The anglers that started at 7:15am were already in that area, so I assumed a few kings were taken. By the time I made it out to 100ft, the top water action had stopped. Current was running about 2 knots, and with the wind and chop it was hard to make any headway.  On top of that, debri was thick -- requiring the baits to be continually reeled in and cleared of weeds.

I made a zigzag drift from just South of the pier to Hillsboro Inlet without any bites.  At the inlet I observed another small skyrocketing king just before a huge rain squall hit with distant thunder and lightening.   For safety during the squall, I hove to -- keeping my bow pointed into the waves as one never knows when a big gust will hit that might otherwise cause a broach. 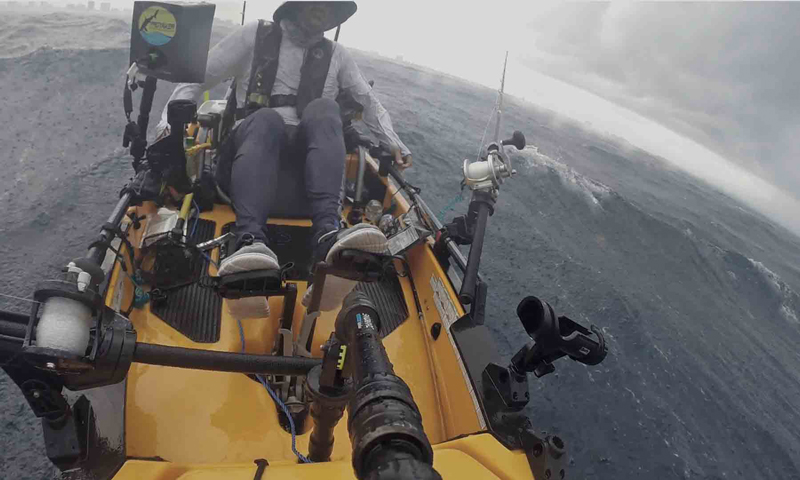 Off the inlet sea buoy, I started pedaling back towards the Pompano pier. It took about 3 hours. I was very tired, but kept thinking: all it takes is one fish to make the difference between a horrible trip and a fantastic day.  With that in mind, I pressed on past the pier, to line up for one last short drift. 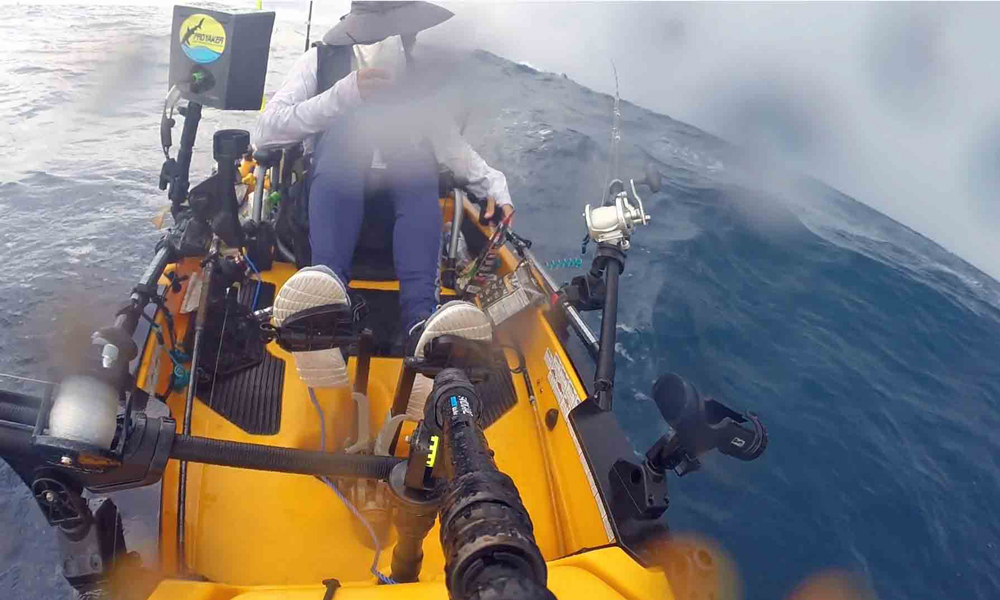 As windfinder had forecasted, the wind layed down at 1pm.  I started a last ditch effort to catch a fish. Between 1:15 and 1:30pm, I had 3 strikes in the same area I saw skyrocketing kings in the morning.  I missed the first 2 and landed the third !  It was a small King Mackerel. 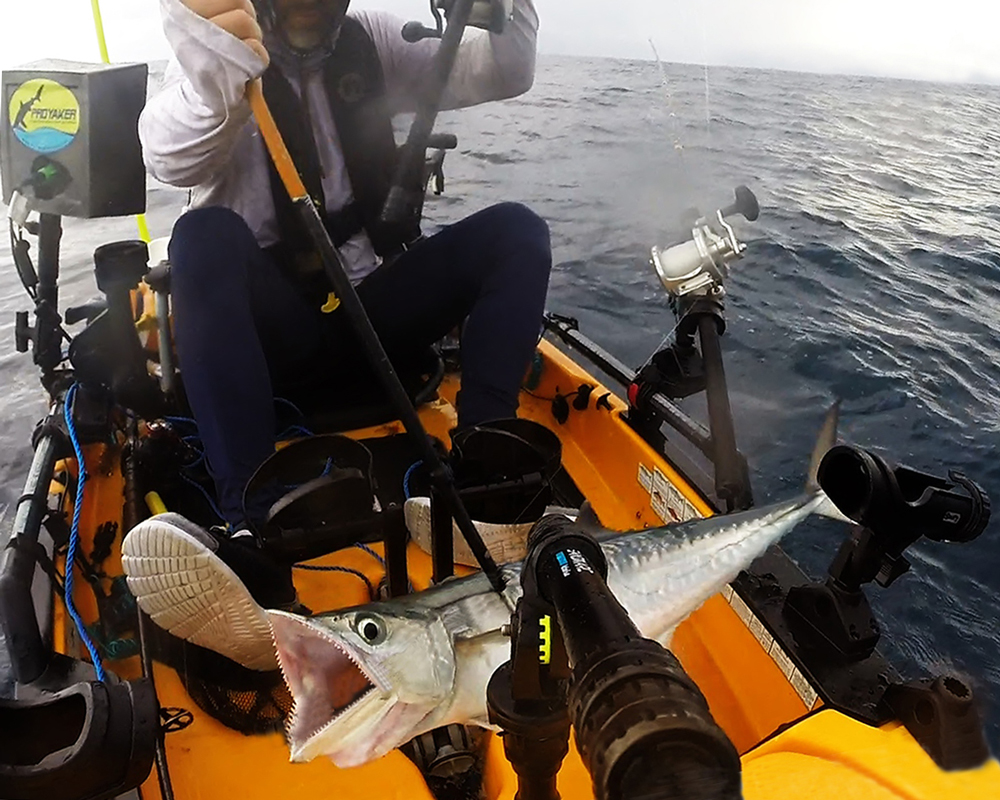 With one more quick drift, there was a very good chance of catching another King Mackerel.  Unfortunately, It would take 30 minutes to get to shore so it would have been too late to make the tournament 2pm deadline.

I looked at my watch and it was 1:33pm.  I did not even bother to bag the fish, and started pedaling as hard as I could for shore.   I made it to the beach at 1:58 pm -- just before the deadline.   I figured my rat king might be good for 10th place and hopefully a free pair of sunglasses.

To my amazement with 77 anglers participating, aside from trash can slam entries, there were only 4 qualifying fish weighed in due to the extreme conditions.  The 6.4lb King Mackerel was good for 4th place ! As in last year’s Summer Slam 2, the anglers with bigger King Mackerel did not enter the Calcutta, so again I won the Kingfish Calcutta !

In retrospect,  I wish I was more aggressive about being ready to go at the 7:15am shove off.  You never know when a bait boat or something else is going to cause an unexpected delay, that might cost you a fish.  In addition, Never give up !  I was one of about 3 other kayak anglers that were still on the water toughing it out until 2pm. With 27 minutes remaining, I was able to land 4th place !

Thanks to Joe and Maria Hector and their staff and sponsors for executing another successful world class kayak fishing tournament. 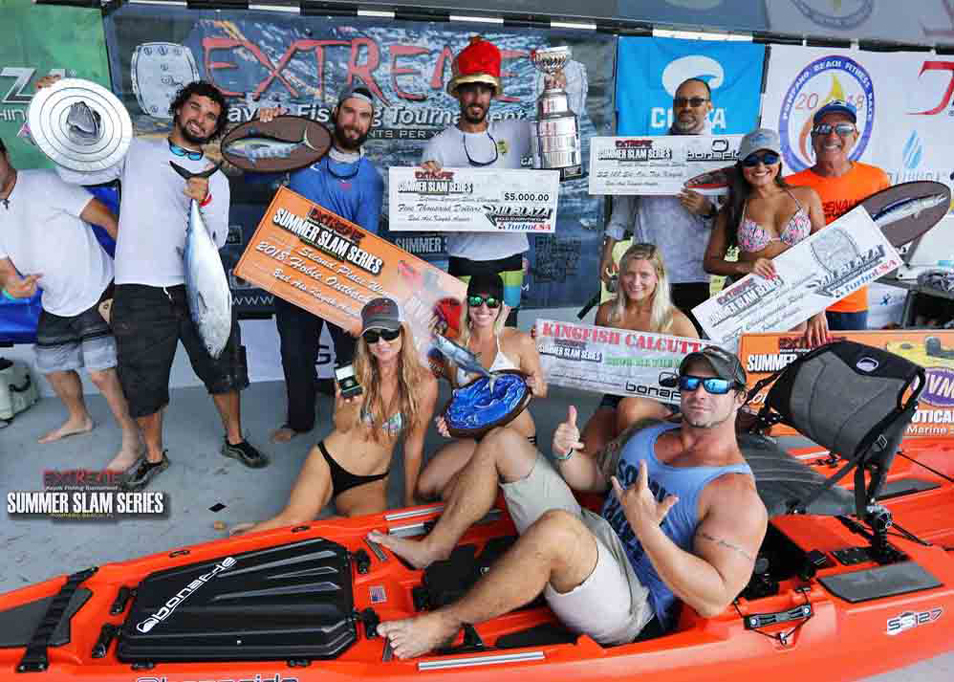 Congratulations to the winners:

Greg Nolan - Winner of the 2018 Summer Slam Series and the  RAILBLAZA/TurboUSA Championship Ring with 40.3lbs total (2 Blackfin Tuna) taken during Summer Slam 1.  He will be awarded the ring at Summer Slam 2, 2019.   As the 2017 Champion ring was awarded at this event. 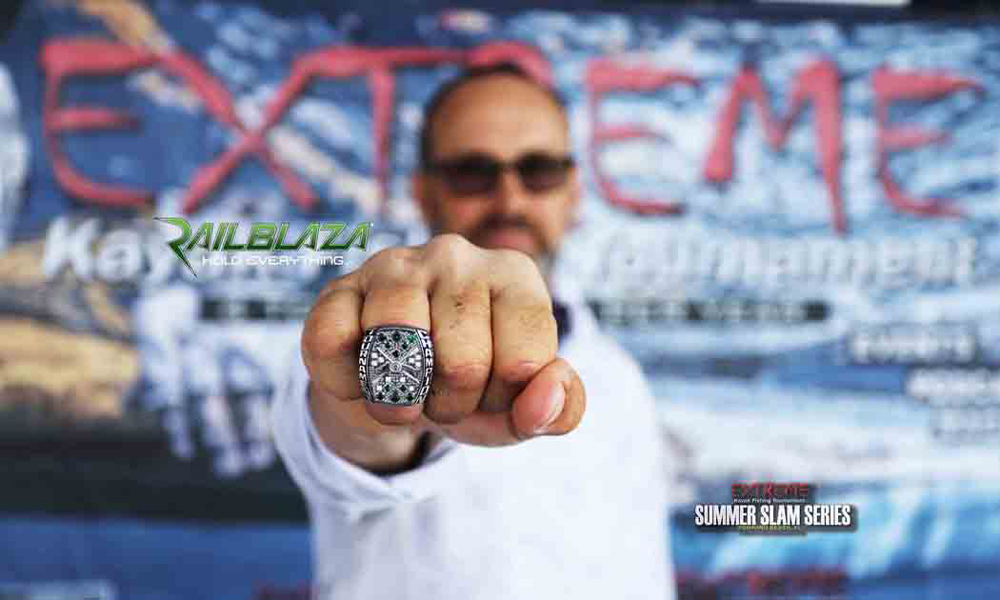