Since this was a Full Moon 44 Hour trip leaving at 10:00 I came down on Thursday to catch bait with my Pin Fish pal Omar. The bite was slow and I had multiple tackle issues including my rod tip breaking and both my main reel and my backup deciding they’d had enough. Oh well “Stuff” happens especially when you are fishing. Fortunately, my buddy was not only catching fish but had a backup that worked. There is luck (as in life) involved in fishing but being prepared is what makes you consistent and is what counts overall.

We had almost a full load of anglers eager for some offshore action. Trolling on the way out was slow but there were a few Kings and Spanish landed. In general, the trolling has been sketchy. I think this is due to seasonal transition. It seems that as a season peeks (in this case Summer) there is a lull in the action.

We started around 9:00 PM in great conditions with a solid 10 knot wind that would last throughout the trip.  This is a blessing as it gives the Captain a good anchor heading and us a break from the heat. The Mangrove Snapper bite was solid all night with decent numbers on every stop. I was especially pleased with the average size I caught as I had a significant number in the five-pound class. Although I didn’t have any hook ups there were a number of Gags caught during the night as well as one Cobia. On the spot the Cobia was caught I had a monster hook up that took me to the Bow and as far as I know is still running. It was likely a Big Shark but I told people it had to be a world record Cobia. Side note/ Fishermen aren’t liars we just “Dream Big”

Sunrise, time for big live bait. On the very first day light drop I put down a big Pin Fish and before I could tighten my line BANG! Turned out to be a “Keeper Gag” I quickly fired another down and got hit just as quick. This time it was a throw back Red Grouper. I would end up catching at least five of those on this stop and I kid you not at least 30 throughout the trip. Not sure what the Scientist say but from my prospective the future is bright for Red Grouper.

After a few more stops in this area where I picked up some additional Mangos, Captain Garett Hubbard said we were going to make a move to a wreck in search of Amber Jack. After a run of more than an hour the Captain said we were close to the wreck but he wanted to stop on some “Hard Bottom” to get an anchor heading first. He said we were most likely to get Grouper here and possibly Snapper. As soon as my bait hit bottom I was hooked up on a nice AJ. Looking around so were many others. The bite was ON! I did eventually get “Sawed” of by braid but fortunately the AJ’s were biting so well I had another one on as soon as I re-rigged. This time I landed one in the 30 B range. Tip: I often get asked why I make so many rigs up before we start fishing. People assume it is due to hanging bottom. There are multiple reasons but the primary one is I want to be in the water as much as possible thus, I want to spend as minimal time as possible rigging while it is fishing time. When tying multiple rigs, you need a safe place to hang them from and don’t tie swivels to them as if you do you will have a tangled mess.

Next stop we were on the wreck and the AJ’s were on FIRE! The whole boat was hooked up This can be a challenge and hopeless with out cooperation.  The bad news is many nice fish were lost, good news many were landed as they were chewing. As the action slowed down I decided to switch over to my Snapper Rod and fire down a Threadfin hoping for some Mango action. This time of year, I never go below 60 LB line as it is Gag season. After soaking the dead bait for some time, I pulled up on it and BANG! Monster Fish ON! I knew right away I had a “Homesteader Gag” on. Try as I may I could not turn him so I had no choice but to let him run. Right as he slowed down and I thought I turned him the line popped. When I reeled in my leader was badly frayed down at hook level. This was conformation it was a big Gag as he hadn’t cut me off just wore the leader out. Oh well that’s what keeps you coming back.

After the wreck we went to some near by ledges where the AJ action was intense to say the least. Bad news, not everybody limited out but good news, everybody had a chance too. I managed to land one in the 60 LB range and picked some decent Goozers as well.

Time for one last stop before heading back. Captain set us up on a wreck. Though there was steady AJ action I decided to focus on dead bait hoping for a Gag or big Mango’s. I did get a couple of big Vermilion Snapper but, no Gags or Goozers. However, there was an exciting moment. I was on the bottom and got slammed! My drag started “Singing” I never thought it was a Gag as it was moving too fast. I was sure it wasn’t an AJ either. I had it on line for a while and actually turned it and began working it back to the boat. It was a classic fight. The fish tacking drag but, I was  steadily gaining on it.  All of a sudden, the Monster took one more run and just came un-buttoned. I reeled in and to my surprise my hook had broken. This is rare as I was using 8/0 Mustad hooks that are usually sound. Oh well one thing I’ve learned time and again. “There are multiple ways to lose a fish and you don’t have him until he is over the rail” When your fishing 100 miles offshore you have to be prepared for anything. 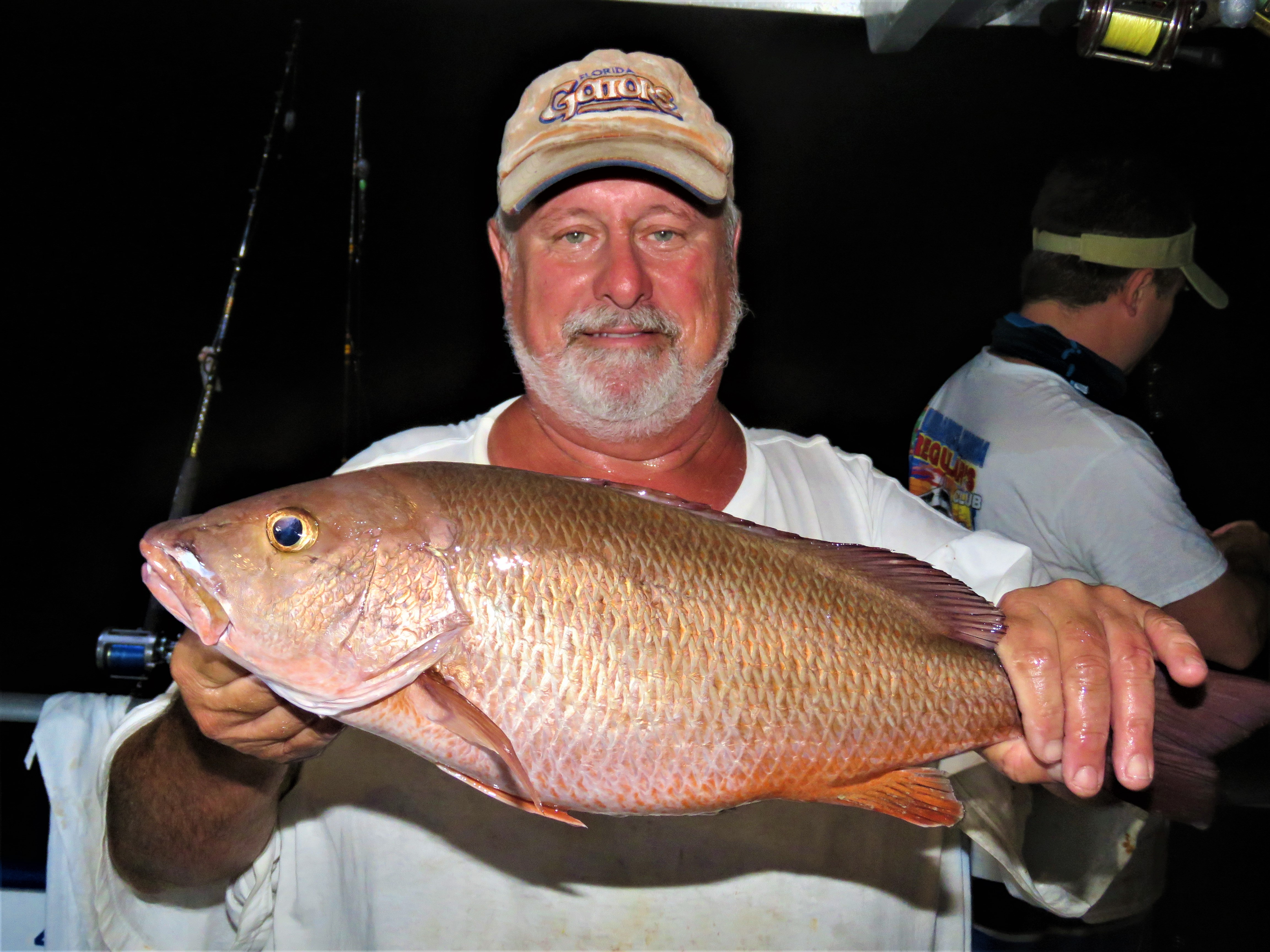 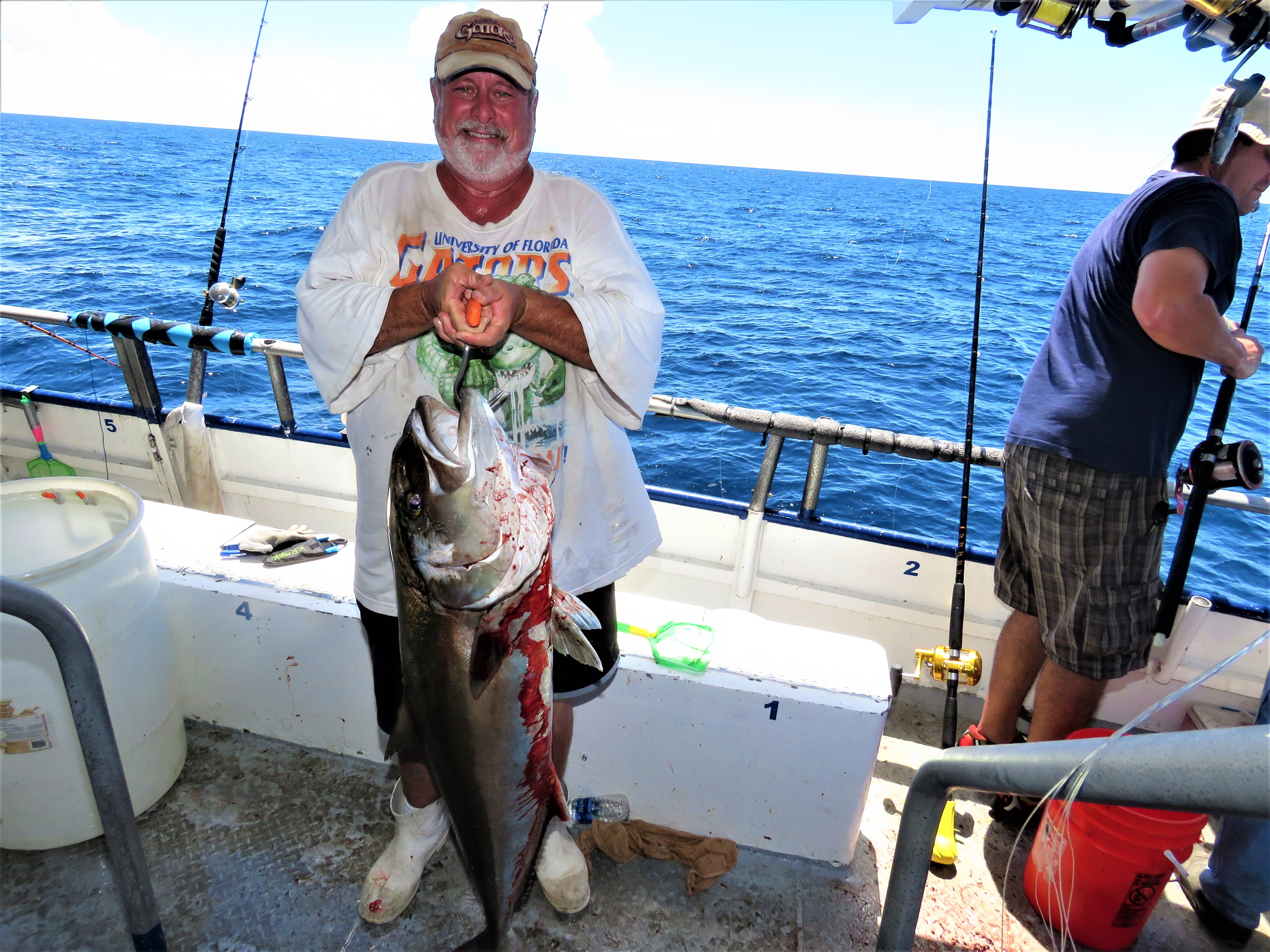 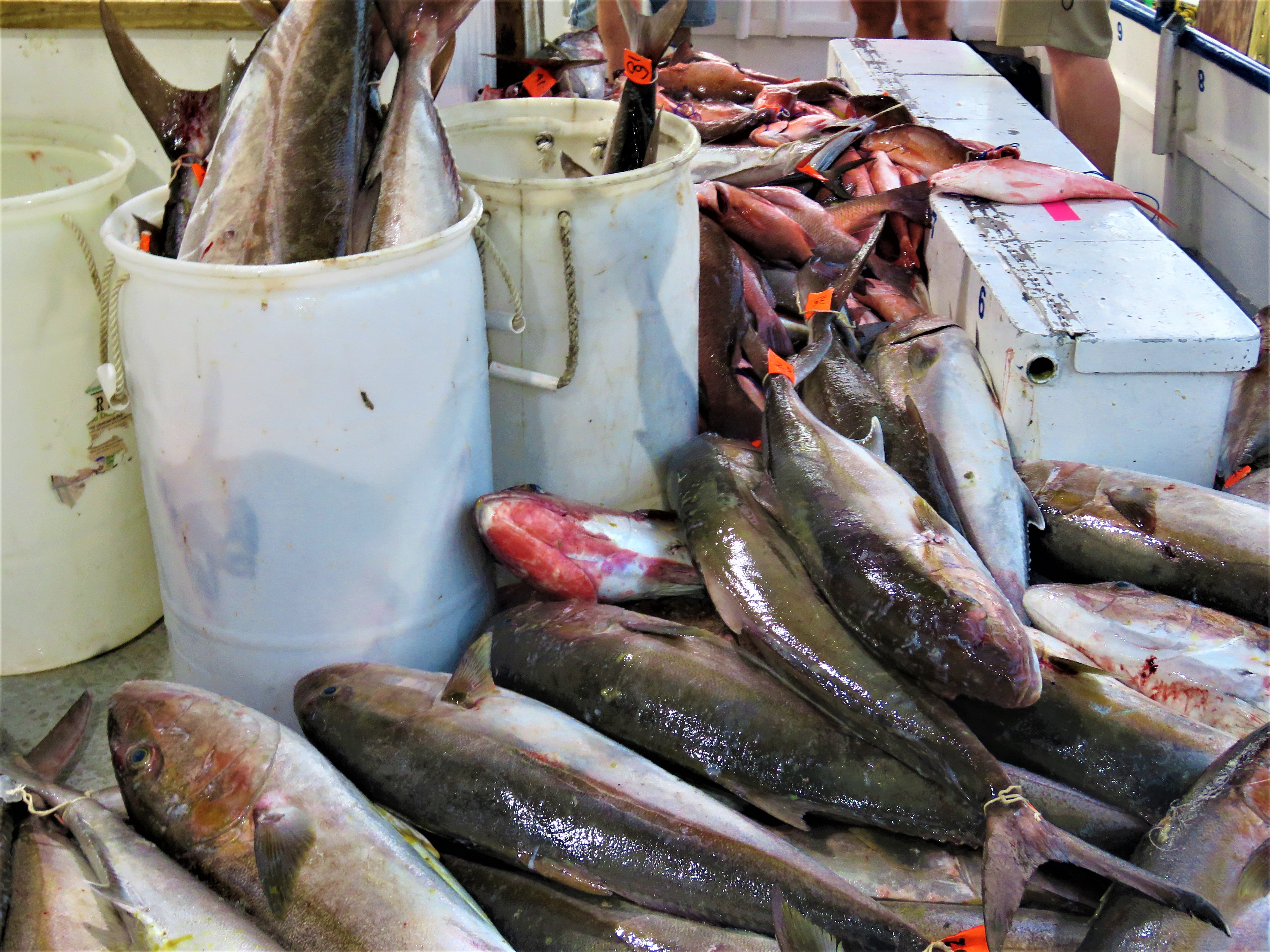