Catching bait was slow but steady but, with a little help from a friend I was able to reach my goal so time to head for the boat. Trolling on the way out was slow as even my friend and legend “Jig Head” Ed struck out. Good news it picked up the next day between spots as several Tuna were caught.

We started around Midnight in winds 10-15 with seas about 3’. Having a breeze this time of year is a blessing as it gives you a break from the heat. Fortunately, it would stay this way throughout the trip. The Mangrove Snapper bite never really took off.  I’m not sure exactly why as they have been biting well. The Porgies and Vermillion chewed the whole trip.

Sunrise brought the expectation of Gags and Amber Jacks. On the very first stop after Sun up I dropped down a “Big” Pin hoping for a Gag attack. After soaking it for at least ten minutes I noticed a few Mangos coming up so I decided to switch to a Threadfin. I got several decent bites but produced no fish. One of my philosophies is “If I’m going to soak a bait it might as well be a livey” I dropped down a Pin and after a 5-minute soak I felt it get nervous. Suddenly Bang! FISH ON! Turned out to be a nice Gag in the 10 LB. range.  Baiting up as quick as I could I shot down another. I barely gone the line tight when I got slammed.   I cranked as hard as I could but he cut me off. I reeled up my line and my leader was shredded.  Just as soon as I rigged up the Captain announced it was time to move.

We made a couple more stops in the general area but I didn’t get any more hook ups. To be fair there were a number of Gags caught around the boat.  Captain Bryon said it was time to target some AJ’s and thus we needed to make an hour run. (It was during this run that some Black Fins were landed).

On the very first stop after the move I dropped down a hand sized Pin Fish. Bang! I knew right away this was no Jack. Turned out to be a Gag at least 15 LBS.  Looking around the boat I could see people hooking AJ’s everywhere. I waited until the anglers at my sides got their fish in.  Dropping another large Pin I got hit on the way down. Ended up catching a Jack in the 30 LB. range. Tip/ pet Peeve/ When some one has a big fish such as an AJ on use a little patience or common sense and don’t drop down right on top of them as the likely result is you will get tangled with them and lose fishing time not to mention cause someone to lose a nice fish. Either wait (tough to do) or if there is room move to another spot and drop down.

On the next stop I saw 4 rods (Including mine) bend at the same time. At first, I wasn’t sure what I had on as it fought hard on the bottom but then seemed to relax. Just as I thought it might be a Gag it started taking drag.  I knew it was a Big AJ. Sometimes Big Jacks will swim up with you not really knowing they are hooked. When they wake up the fight is ON! After some fish aerobics First Mate Will gaffed a Reef Donkey in the 70 LB. class.

The next several stops saw much of the same. Big AJ’s a scattering of Gags as well as some keeper Red Grouper, Scamp Grouper and “Picky” Mangos.  I did hook what I am sure was another big AJ but I got tangled in some lines and lost it. Time to head back, take a week off and get ready for the “Full Moon 44 Hour Trip. I can’t wait!

P.S. Just as we were pulling anchor “Jig Head” hooked a Sail. He passed the Rod to Will who cranked it all the way to the boat where it broke off on the anchor rope but not before some great “Tail Walking” Check out the video on Hubbard’s FB Page. 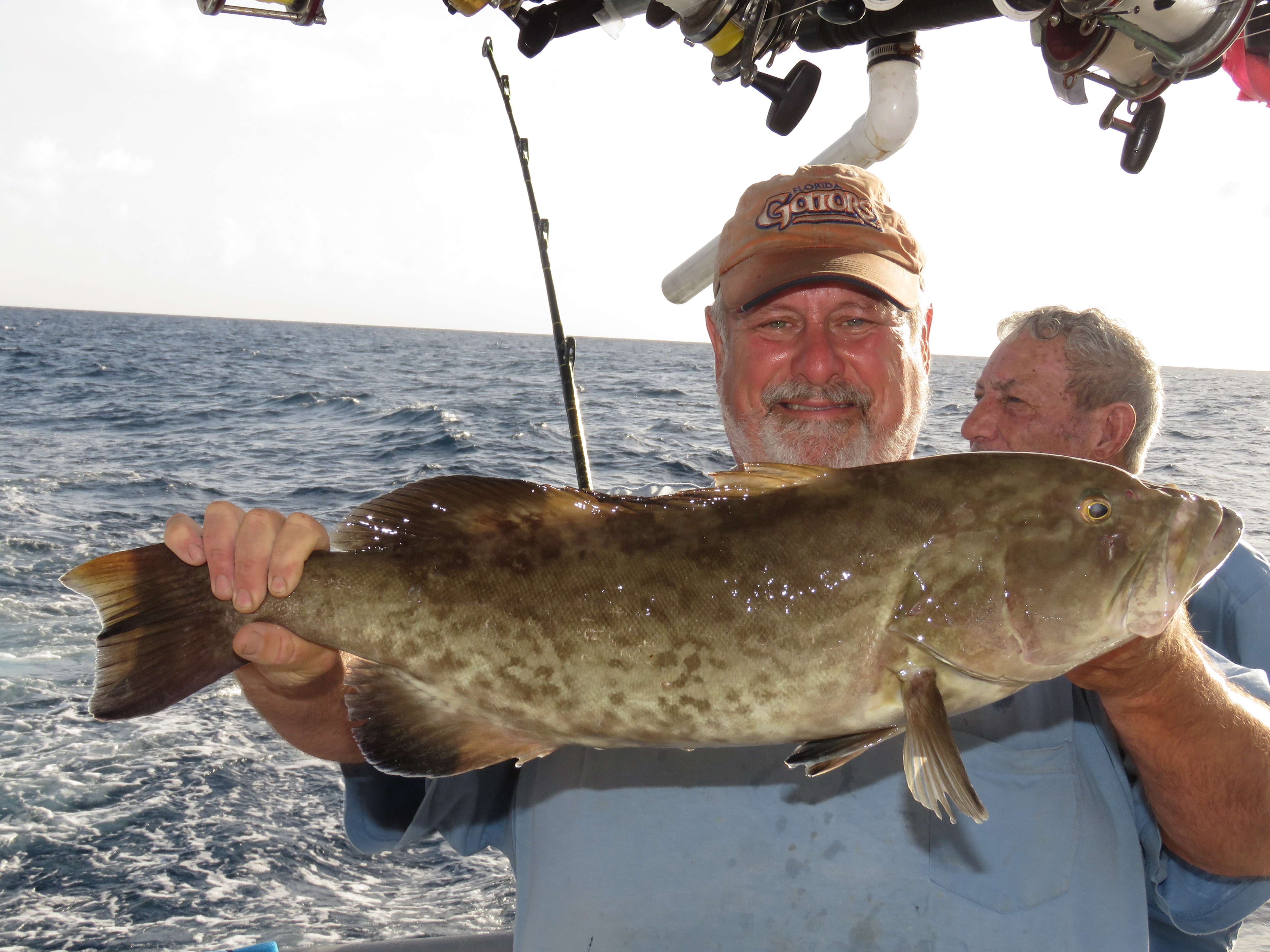 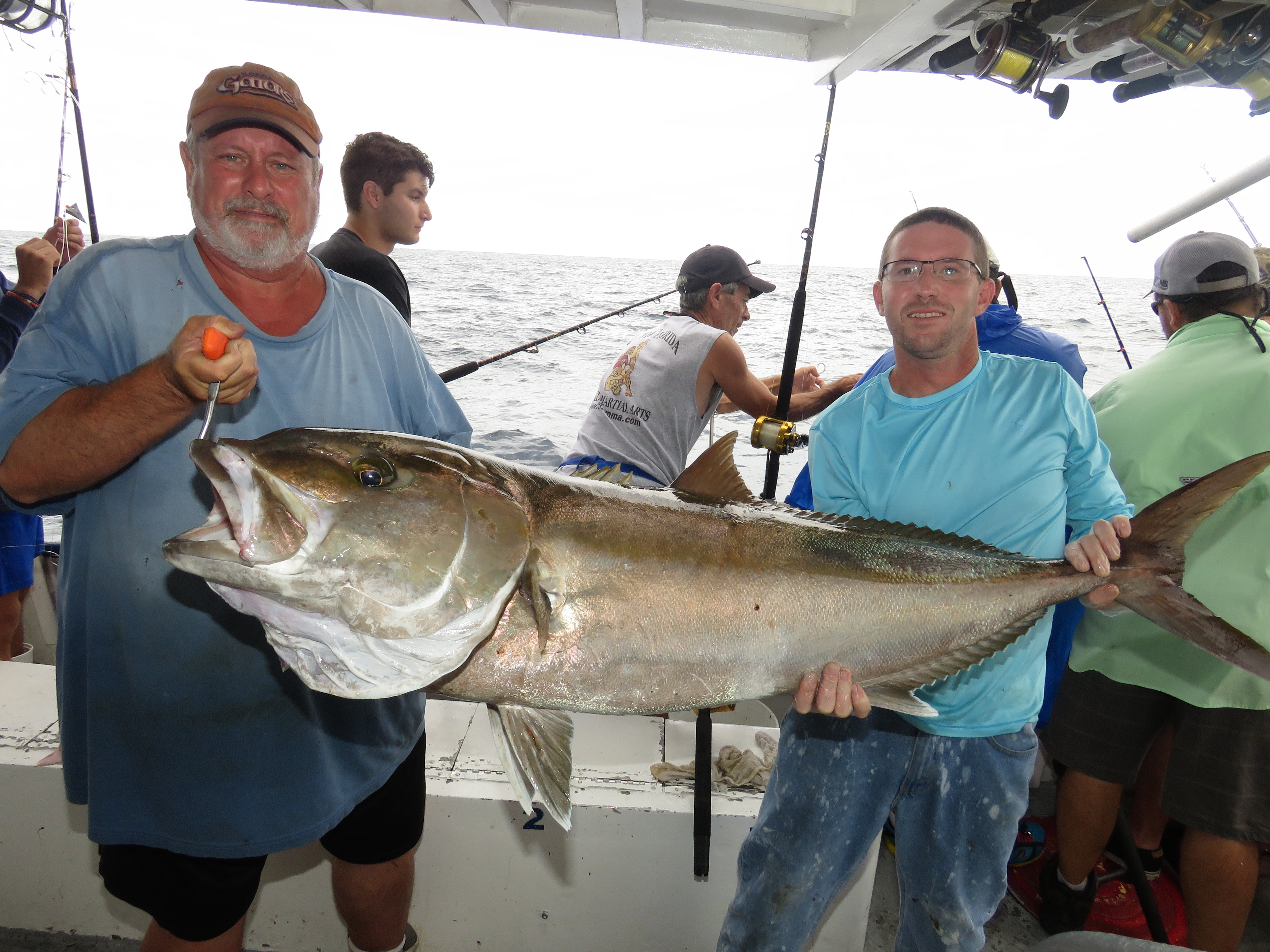