With the opening of Amber Jack season comes the need for Big Baits. With that in mind I met up with my buddy Omar at one of our “Secret” Pinfish spots. The bite started out slow so we ended up moving to a “Top Secret” spot and after a few hours we got what we needed and head toward the dock with Reef Donkeys in our dreams.

Now that ARS season is over the trip loads are lighter which is a great time to fish a Party Boat. We left on time with 30 anglers eager for action. Trolling on the way out was a bit slow but I did see a couple of Kings and Bonita find their way over the rail.

We started around Midnight in perfect conditions as far as wind and seas. Wind was 10-15 the whole trip which is a blessing for August and the oppressive heat. The only issue was the current which was surprisingly strong most of the trip. The first couple of stops saw some Mangrove Snapper action but, the third stop they were fired up. For about thirty minutes they were hitting so fast I would cast and literally start winding as soon it hit bottom as I had a fish on!

Time for one last stop before Sunrise. The Mango bite although not as hot as the previous spot was decent but the Gag bite on the stern was epic. I started hearing a steady call for Gaff! Turned out they were at the right place at the right time.  The mates were so busy on the stern I ended up gaffing the one Gag caught on the bow. In total 17 Gags were boated on this stop.  The biggest disappointment for me on this stop (beyond not getting a Gag) was seeing so many people in their bunks that missed out on the bite. I’ve seen people catch fish all over the boat but never from the bunk. As I say “If you want to catch the fish of your dreams you have to fish while others are dreaming”

Side note: People often assume Captains put the stern on the best spot. Although this maybe true in some cases I have seen no evidence of this.  I have fished all over the boat and in my current role I usually fish in the bow area. I remember a time last year when a guy accused the Captain of putting only me on the fish. Some how with 40 people on board the Captain was so skilled he positioned the boat so only I caught fish. In general, the reason the stern appears to catch the most fish is it often has the greatest number of experienced anglers.  The legendary Captain Wilson Hubbard had a saying “20 % of the Fishermen catch 80% of the fish, always have always will.  In the case of this stop I think it was a combination of the wind and current that had the stern just over the ledge we were on and the Gags congregated there.

The day bite overall was decent for this time of year as Mangos bit on every stop and gags were steadily picked as well. Of course, the near extinct American Red Snapper aggravated us on every stop. The good news is we are catching so many most anglers are becoming experts at venting and releasing so they can breed and be ready for next season. I did manage to get a “keeper” size Gag.

Captain Bryon announced we were going to make an hour move to a wreck. Time for a brief nap and dream of the AJ’s to come. We got anchored up and the bite was instant. AJ’s were on the line everywhere. Great news they were all legal size although no Giants except of course the ones that got away. Bad news one angler decided it was a good idea to drop down straight 200 LB Braided line on a reel with no drag. The result was he hooked an AJ he couldn’t reel in that acted as a “Buzz Saw” and cut off at least 8 other angler’s fish as when mono hits braid it is like a hot knife on butter. I don’t want to start the argument about braid but I would ask you to consider not using it for AJ’s on a Party Boat.  As for me I was one of two against the braid.

The rest of the trip saw steady action and I managed to pick Mangos all day. On one stop late in the trip I was using a large Threadfin win BANG! Big Hit! At first, I thought I had a decent Gag but actually got more excited as I realized I likely had a Big Goozer on. Turned out I was right. I reeled up by far the biggest Mango of the trip it had to be in the 7-8 LB range. It appeared to be hooked well in fact the hooks were out of sight. As I tried to swing it over the rail the entire bait popped out so fast it hit me in the back of the head. The fish had swallowed the bait without taking the hooks. That’s why I say you don’t have it till its in the box. Time to head home and get ready for the next one. 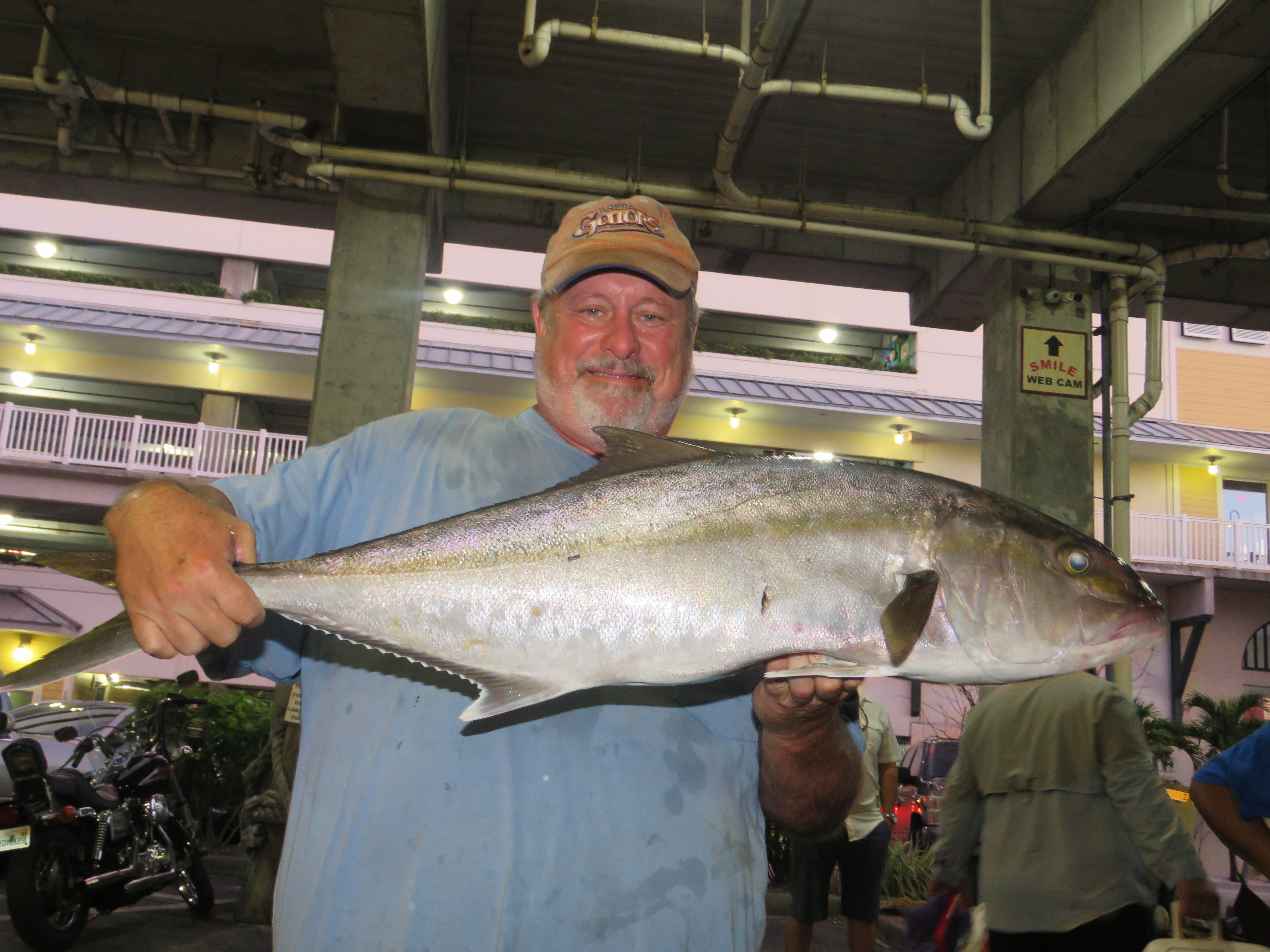 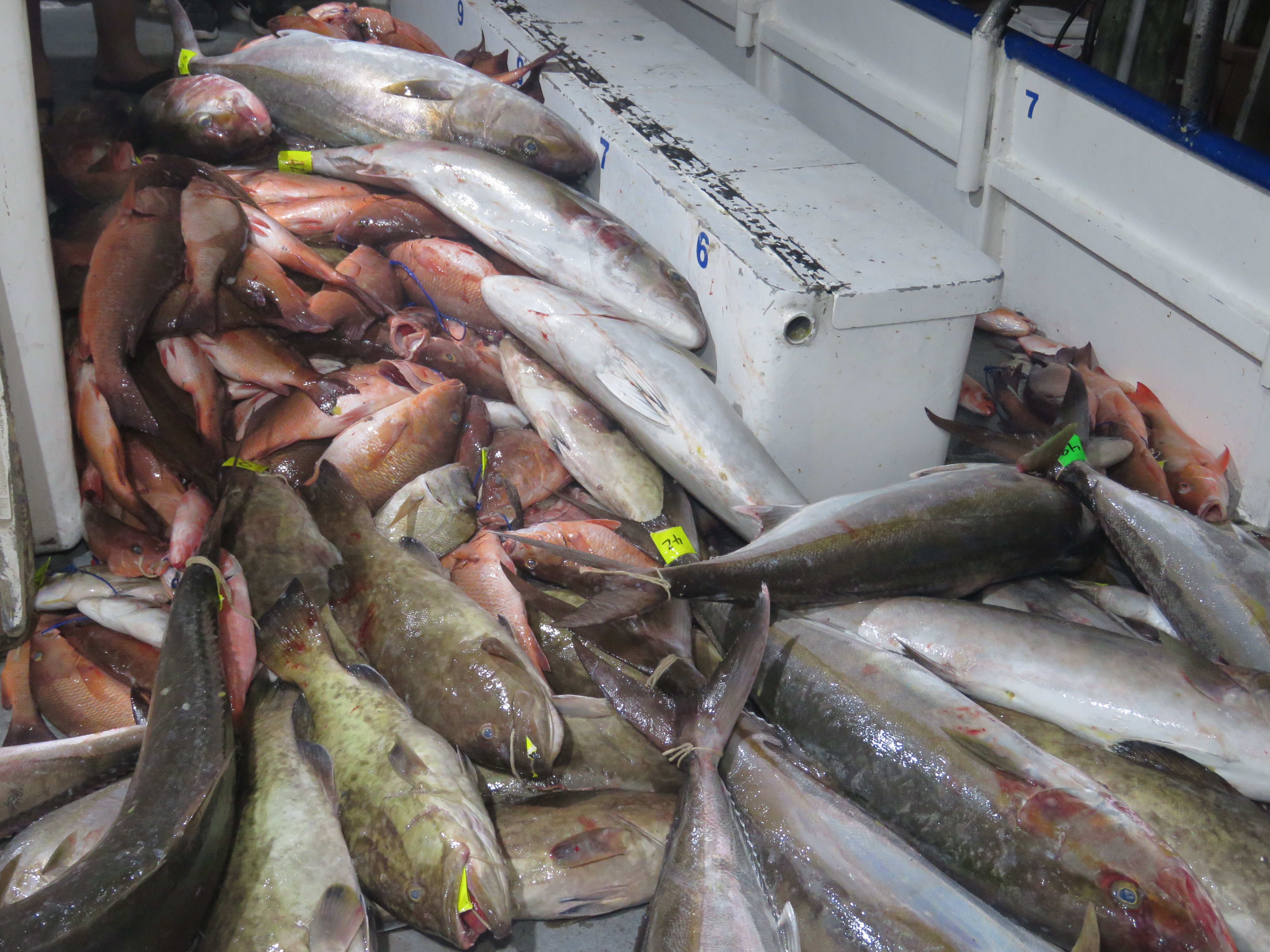