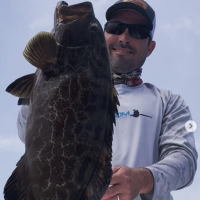 rivamunstasteve Senior MemberPosts: 696 Officer
June 2018 edited June 2018 in South General Fishing & The Outdoors #1
Took my brother Offshore On tiny tim - he’s visiting from West Virginia. I tried getting him to go to the keys but he said the poop shoot would do. The color change was right on the reef , some decent weedlines flowing north and south out past 600. Began fishing at the 58 line. Worked through heavy scattered weeds that ran sw to NE. I cleaned and cleaned and cleaned and cleaned and cleaned lines.  At the 55 line got our first fish- thought it was a weed. Missed a 10 pounder,  hit the outrigger and jumped 10 ft high. Worked south and east, picked up another. Found a school of 6 surrounding the boat, would not take anything (and I mean anything), but we made a loop and went by faster (8 mph)..zzzzzzzzzzzzz!, three lines down. Made my brother bring them all in. We left the other three schoolies without trying another pass, the fish were in the 21-24 inch range. We found another school of fish that were on the small side 18-22 inches, let them back. Not long after we caught a 28 inch fish, and then another schoolie that had two buddies with her, didn’t try to catch them. 7 is my “conservation limit” so we threw back a few more fish in the same size range and worked in slowly. We did throw out large baits around the schools without any luck.  My brother is BEAT, sleeping on the floor right now 🤣.
0 · Share on TwitterShare on Facebook