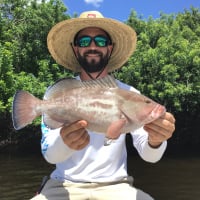 integrity640 Posts: 21 Deckhand
June 2017 in Big Bend General Fishing & The Outdoors #1
Fished Yankeetown this weekend and was blown away at the number of boats, even an airboat, that were hauling *** up n down the river in no wake zones. Didn't see a single FWC or sheriff all day either, do y'all give people the slow down motion with your hands or just let'em be? I'm sure a few weren't aware as one boat stopped to ask while we were fishing.

On a side note I've had people wave at me to slow down in Treasure Island, there's a very strange sign that's an idle speed on weekends, 25mph during the week with certain hours as well. After that happened (99.99% sure I was in the right) I called the local sheriffs office, got transferred 6x before someone could tell me I was right, had to give them the statute number off the sign....its the run coming into Blind Pass
0 · Share on TwitterShare on Facebook