I was attacked by a large mouth bass

syd7792 Posts: 58 Deckhand
May 2017 in General Freshwater Fishing #1
The title sounds a bit crazy right? I wouldn't believe it either if I didn't see it, but luckily I caught it all on film! I was kayak fishing on a beautiful Sunday afternoon. Hoping to end the week with a good day of fishing. Little did I know what this day had in store for me. I am about an hour in half in to fishing and have had one bite but lost it on the way to the boat. Already Im thinking this isn't going to be it for me. I cast up to the bank and hook up to what I immediately can tell is a giant. You know when you set the hook and the fish darts off to deeper water? Thats when you know its a big one. After a fight that felt like a life time I successfully net, get some pics, and release the eight in a half pound bass. Im thrilled about the catch and am thinking this day can't get any better. Literally 5 minutes later I get another bite but right at that moment when I set the hook I feel something hit my arm then water splash all over me. It happened so fast I had know idea what had just happened plus I lost the fish I had on the line in the first place. Im sitting in my yak thinking what in the world just hit me? Then I noticed my gopro was recording and knew I got what ever it was that wanted to say hello on film. I fish for a couple more hours and then pack up to head home. I look over the footage and couldn't believe my eyes! About a four pound large mouth bass launched straight out of the water at me. I have never seen anything like this before. It was like someone lit the fuse on a bottle rocket and as soon as the fuse ran out it was off! Still as I am typing this I still am amazed that this happened to me.I have never had a fishing experience like that day and it will be one that I will never forget.Click the link to see the entire video. [video] 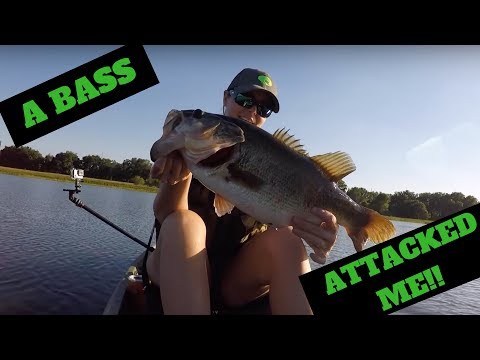