landshark Posts: 76 Greenhorn
April 2017 in South General Fishing & The Outdoors #1
Springtime is finally here and one of my favorite fish to catch have showed up thick. Giant Amberjacks are here and ready to party. My buddy Jason, GF Brook and I, decide to drop on some local pompano wrecks before doing some meat drifts. We immediately got into the AJ's and started to lose them on 80b leader and live gogs. After losing a handful I bumped up the leader to 100lb Bullbuster Fluorocarbon and that did the trick! We pulled a 48b Reef Donkey straight off the wreck first drop with the heavier leader. We went back after that fish and my buddy Jason was hooked up, and we did the usual GO GO GO style of running off the wreck. Although the Fish couldn't be stopped and we lost it, but my GF decided to drop a jig as we were off the wreck and we were re rigging and got smoked! We immediately put the boat in gear and drove even further away. This AJ was not having it and stripped 250 yards of locked down 80lb braid in under a minute. After a 15 minute fight, my GF Brook landed her biggest AJ ever and on a jig too! Landing these bruisers on the jigs is easier said then done and it seems as if some days, those AJ's all run to the same spot on the wreck and break you off.

We switched up the pace and did a few drifts in the pompano/hillsboro inlet area with live gogs and pilchards. It was DEAD needless to say. We setup our last drift in 300 and we started jigging immediately. I got smoked on a 3oz jig in 250ft and immediately thought nice Blackfin as it was deep, no where near a wreck and it was doing the typical Tuna Death circles. Turned out to be a 30b amberjack, just roaming the middle of nowhere. I guess it was a day for the Reef Donkey's and they were roaming the ocean. They gotta get from wreck to wreck somehow. AJ's were kept for shark bait.

Watch the AJ's in action and babe hooked up below. 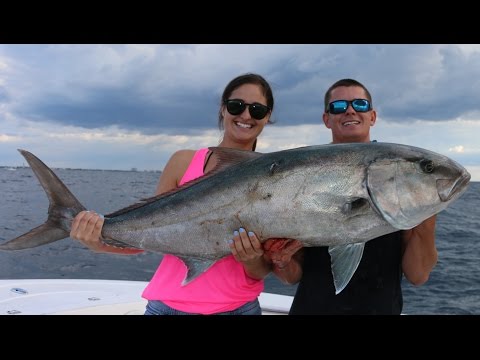