kayakerinkeywest Posts: 632 Officer
September 2016 in Fly Fishing #1
Disclaimer. I am not a seasoned fly fisherman. My vast experience is back in California/Nevada fishing freshwater species with a 3 wt. This last Tarpon Season down here in Key West I picked up a used 12 wt Bass Pro Shops combo off of Ebay and had 8 rolled on/blow ups, with 3 hook sets, and nothing lasting beyond that (stuck them but didn't let go of the line, stripping at an angle and only being able to rod set the strike). The fly rod has been sitting there since the migration left. I fish a lot and hit up pretty much all the species around the Keys from flats, inshore, backcountry, reef, and offshore (primarily all by kayak but some boat fishing and shore fishing as well). I tend to hit all the different forums of FS accordingly. So this is my first fly fishing post.

My last trip out offshore I was able to tuck right into the middle of the bait balls being busted by the Blackfins. Easily within casting distance around me and was hooking up to Bonito not more than 20 feet from the kayak when I was putting out the Trolling plugs. Thought it would make for a different trip if I did the same thing but with the fly rod.

Plan kind of went askew as there was no topwater activity and zero birds the whole evening. No weeds either. I was hanging around the Kendrick Wreck waiting to see if there would be some activity just coming off the wreck. As I was vertical jigging, I was over run with Dolphin. Easily hundred of them from legal to 10-12 pounds. As there was no weeds around, the minnows were using my kayak as a refuge. Once the Dolphin started going after them, both just hung around my kayak for a while.

Not being prepared and still rigged from my last Tarpon outing two months ago, it was pretty much your general foot on fire, cluster fudk. Got one going on the fly early, and was able to pick up a couple of my trolling baits that I was tossing out trying to keep one hooked fish in the water while I was flailing aimlessly with the buggy whip. Also got one to hit the vertical jig. Totally rigged wrong all around and they were pretty much gun shy after a while. Eventually, I thought it would be better to run from them and then come back on the troll. Unfortunately, after running and shooing them away, my fishfinder/gps died and I couldn't find them again or the wreck. So, I did some blind trolling and picked up a couple more Blackfins.

I'll be at it again, but a little better prepared. 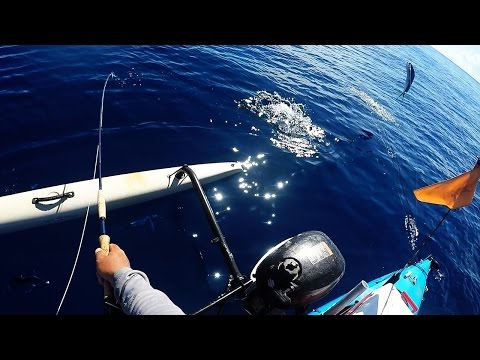