SpaceCoast Slayer Posts: 3,527 Captain
June 2016 in East Central General Fishing & The Outdoors #1
Been fishing the goon quite a bit lately... Not really by choice but all my go to summertime spots were basically ground zero of the fish kill and I just haven't really had the gumption to go out and look at em just yet.. So I have been making the hour drive north up to the skeeter.. The bite has been very consistent on artificial.. Here is a little taste of what I have been finding out there on nearly every flat.. 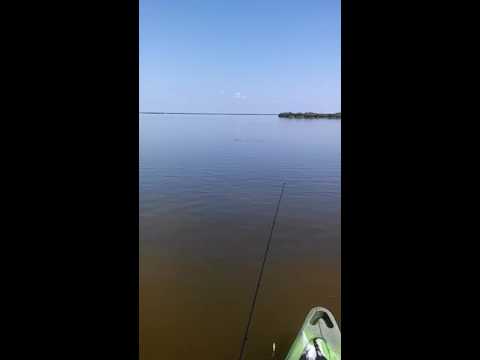 Since that little tropical storm rolled through and the subsequent rainy days after, plus more consistent south winds, the water levels have risen in the past week or so.. Still seeing tails, but less of them because the fish have more water over their back and it has allowed them to spread out more and they are less concentrated than they have been, but still pretty easy to find.. When they are tailing, about the only thing I have had luck on is small shrimp imitations.. I have been getting a ton of short strikes as well, missing 5 or more fish per trip.. Not sure why that is, could be the terrible visibility.. The water is straight doo doo out there.. When they're tailing they are so wrapped up in what they are rooting on that most fish you literally have to touch with the lure to get them to notice it.. A good handful of the reds I have been catching recently were cane poled right at the side of the kayak close enough to where I can touch them with the rod tip.. The vis is that bad that you can get that close to them.. We actually observed a group of tailers flushing out and eating shrimp around 2" in size... We sat there for about 15 minutes just watching these reds be redfish and it was awesome.. Love that place.. Been averaging anywhere from 5-10 reds per trip.. All slotties, no heroes.. Fishing in about 10" of water though so you can only fit so much redfish in water that skinny.. Here are a few from recent trips..