charlemagne Posts: 191 Officer
May 2016 in Ten Thousand Islands General Fishing & The Outdoors #1
Hey Guys!
Haven't been really on here in a while since my guy stopped renting boats in Everglades City, so as you might of read in the other post, we got a boat! Last Monday we took her out for her maiden voyage. I basically was busy most of the day fiddling around with the boat, getting to know how it rides and all the little intricacies. Oh.. I almost forgot, I also took the boys fishing too.. lol

Like I said I was busy with learning the boat and checking lots of stuff out with the boat, but the boys were busy fishing.. I didn't get many photos, but they got into some trout action they were all good size too!
This is the only photo I took that day. It measured close to 25", the others were smaller, not by much but smaller.


Then I felt like fishing, casted at the mangroves had a nice smaller trout on, then something whacks it and takes it back to the mangroves.. couldn't turn it, I had a light spinning outfit.. what do you guys think, a Goliath Grouper? it looked like a big shadow, then straight back deep into the mangroves.. no stopping it..

Either way, after having some fun with trouts, jacks and snapper for a little while we put one of the jacks we caught earlier out, hoping to lure whatever took my trout, well, it wasn't long and the reel was screaming, it was a big blacktip, around 5 /12 feet long, my second oldest son Paul fought it for nearly half an hour, got it to the side of the boat and it finally tore through the leader and self-released (Thank God!!) here is the video with the end of the fight next to the boat, I didn't want to bore everyone with the long fight and my **** commentary.. lol 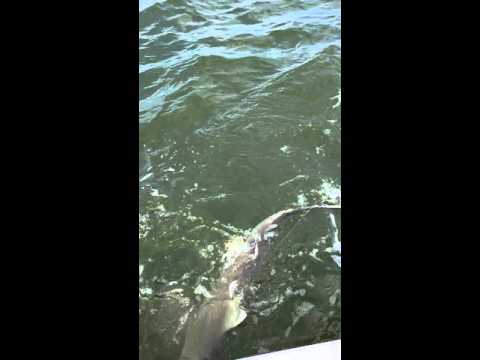 Either way.. it was great getting to know the boat better and still get some fishing in, we didn't have a long day on the water at all, I think 4 hours, as the wind was crazy and we couldn't hit the outside like we wanted to but the boys still had a blast as always!!

Hopefully I will be posting more reports soon!