Dude-On-A-Kayak Posts: 256 Deckhand
March 2016 in Classifieds: General #1
Selling my Saltiga 8000H DogFight 2015 after just a few brief fishing trips. I purchased this new from J&H Tackle.com in late October 2015 for $1,099.00 USD. It includes the box, case, instructions and spool washers. I kept the reel in the case to and from the boat and cleaned it after every use. It is in excellent condition. There are a few tiny scratches on the handle from my gloves. I can't find any other noticeable flaws. I am selling because I ordered the low speed version of the reel and they sent me the high speed version. I had already fished the reel so they would not allow me to return it. Doh!

I am asking $825 cash. Save your self $275 off retail and buy what is very close to a brand new reel. I'm going to list it here for a week. Then it is going back up on eBay. This reel is a work of art that is designed to tackle monster offshore fish. You won't be disappointed. Thanks for looking! 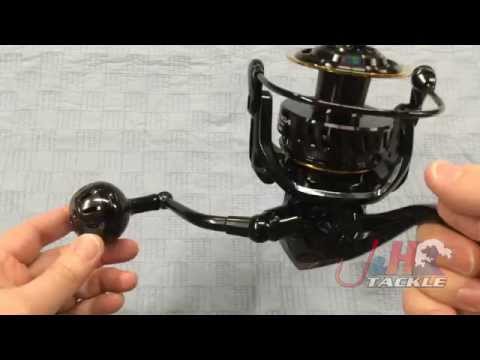 Saltiga introduced unrivalled ground breaking technology to the world, Digigear II, Magseal and Zaion Air Rotor setting the standard in high performance design and innovation. In 2015, Daiwa now take it even further with the introduction of Magsealed bearings and ATD into the new Saltiga range.

The Saltiga heralded a giant leap forward in design, revolving around magnetic fluid. Developed by NASA to magnetically deliver fuel to space ships, this revolutionary innovation was introduced to the fishing industry in the 2010 Saltiga. Mixing a liquid with iron isn’t easy, but Daiwa has mastered it in the Saltiga range. When dispersed evenly through liquid, the iron oxide (magnetite) has a diameter of 1/100,000mm, so small that the surface area of the ferromagnetic particle is around 1/10th of a single influenza virus.

This new metallic grease/oil takes on a new effect, placed by itself it forms a typical liquid helical shape with the introduction of a magnetic force it changes shape similar to the android in Terminator II, attaching itself to any other metal to form a seal. So strong is this magnetic liquid that if placed in a container with a magnetic surface it would retain its shape even if the bottom were removed. Being magnetized this lubrication system avoids any friction and prevents dust intrusion, eliminating oil spray and significantly improving reel life expectancy.

The challenge for Daiwa was to utilize the inherent benefits of magnetic liquid in reel design. Instead of it being used to dustproof, Daiwa needed something that was waterproof. Innovative design was originally used in the rotor/anti-reverse system, combined new CRBB bearings with a magnetic oil membrane, it made water intrusion a thing of the past. Not content just with magsealing the rotor/anti-reverse system, the new series introduces an all-new revolution in ultra smooth rotation and water sealing. Magsealed bearings are placed in key points in the reel to increase rotation smoothness and increase part longevity. The new bearings are Magsealed, unlike the Magseal used in the rotor system the new bearings are a fully contained Magsealed bearing. These bearings are placed in the line roller system and the gear system.

Other introductions in the new series includes a new body design standard, with super metal super precision machine cut technology Daiwa has achieved its finest design ever, with a precision of 4 times better compared to that of the original model. The drag system is called ATD or Automatic Tournament Drag, this is a new introduction into the Daiwa spinning reel range. The biggest issue with many drag systems is that they are not smooth at the beginning of the drag. ATD rectifies this issue. ATD works like this, at the beginning of a strike the drag starts smoothly, then increases to its pre-set drag rating in a fraction of a second, thus eliminating line breakage at the strike.

Zaion Air Rotor, this super strong light rotor is like no other – a new revolution in strength and sensitivity. This design disperses pressure to the entire lower section of the rotor, dramatically decreasing stress and flexing. Working in conjunction with the Mag Seal the Air Rotor has been hollowed out to create airflow through the whole rotor system. This prevents foreign material such as water, salt, sand and dust collecting inside the reel, the added air flow eliminates moist build up in the reel preventing corrosion issues.

With other designs innovations like Real Four, Hyper Digigear , Airbail and CRBB are also utilized, the new Saltiga Expedition sets the standard as the best heavy duty reel available.