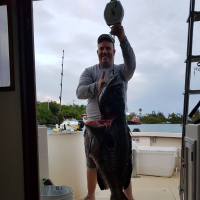 Keepnitreel Clearwater, FL / St. George's, BermudaPosts: 59 Deckhand
November 2015 in West Central General Fishing & The Outdoors #1
Decided to take the wife out for a ride and thought I'd give the crab trap lines a visit. Drop the boat in the water, blasted out off sand key, but the **** garmin decided to say goodnight. Checked the usual suspects, but no dice. Flying blind I guess!
Dropped back the normal setup: rapala xrap 30's on wire leaders, one on the downrigger and the other up high.
Saw a bunch of birds and had a few spanish hit the small spinner I had on surface with a spoon on it, but no bites from Mr. Grouper.......did catch 6 squirrelfish though! Started to wonder if I was too shallow or off the hard bottom.
Wind started to whip up, clouds moved in around 2 and wife was getting cold, so I spun downwind for one last drive by. Picked up the stuff on deck and was almost ready to crank em up when the old Penn 50 sang that lovely tune for me! 30 seconds later and line still peeling and I'm saying, "Hold on a second NASA!" Boxed this one for dinner. I bleed them off and ice them down in a slush bath. Try marinating kingfish in mojo for an hour and then deep frying....its awesome stuff!
IMG_20151129_164138.jpg 69K
0 · Share on TwitterShare on Facebook