charlemagne Posts: 191 Officer
January 2014 in Ten Thousand Islands General Fishing & The Outdoors #1
Hey Everyone! I am back from our 2 days in Everglades city. Had a good time despite issues with the boat rental place.... again. Skip this paragraph if you don't feel like hearing my rant.. just go to the fishing report below it.. :wink

Just a quick warning, my first trip to Choko I rented from Miller's or Glades Haven Marina (same thing) Boat broke down, they only charged me a half day, but I had a horrible time with the little ones (first time in a boat and they were a little nervous) So for the last 5 months I was renting from Everglades Boat Rentals without a problem. But I was going to stay the night at Glades Haven, so I thought I would give them another chance, first day boat kept breaking down, wouldn't start, get up on plane, etc, drove me crazy, this trip I also brought along my 6 year old for his first chokoloskee trip, so now its 3 kids in a boat with me, and the boat is giving us a hard time. I get back to the dock and told the guy there (who will remain nameless, for now) and asked him for a different boat for my 2nd day, since I am with small children and its dangerous with the current and many other factors being in a boat that won't start, or stalls, etc., he told me he didn't have another boat, they were all rented, but he checked the boat and everything was okay. So, next day, get out into the channel anchor up and fished a new spot for a second, tried starting the boat up to move and nothing... we were stuck.. out in the channel for a while, thank God we were in the channel, so a boat passed by and offered help, he had reception so we called the marina and they took around an hour to pick us up, he came and brought another boat (which I thought he said wasn't available) we moved our things and he told me because of the inconvenience he was only going to charge me for a half a day for both days, so I thought that was fair, we fished the rest of the day in the newer boat, even though this boat had some issues as well, I was still able to get the kids around... get back to the dock and he charged me for 2 full days, his reasoning.. the boat was broke down so he lost money not being able to rent it, so he HAD to charge me the full price??? what???? There were people around, I don't like making scenes, so I just said this was my last time ever renting there. YOU SHOULD STAY AWAY FROM GLADES HAVEN MARINA just a warning!

NOW ONTO THE FISHING!!!
Despite the issues, I still was determined to get the kids on some fish, so we hit a few spots I knew would produce.
I wanted to get them on trout and it was a pretty good bite. But First thing is first.. had to get my 6 year old his first fish in Chokoloskee!
and of course... its a catfish... lol


Next, he was getting those trout!


My other boys were catching trout and other fish as well. When we were stuck in the channel my son hooked into a crazy big redfish... but the man in the grey suit was wanting a little taste... so that didn't work out well. Also, he got, what I think is a gag grouper, looks nothing like a goliath to me. Tell me what you guys think. here is also my first video, just shot from two clips, shows the redfish and the grouper: 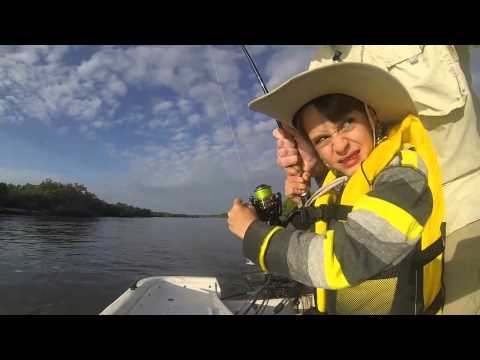 Next day was lots of good action after we got the other boat, I made the best of my time I could.


We were getting a lot of what I don't consider inshore species VERY INSHORE.. lol


I need some ID's on the next couple of fish:
Grouper... what kind?


All in all, even with all the problems and lost time.. kids had fun.. their spirits are always so amazing that we can learn a lot from them.. I wish I could have taken more video and photos but watching over the kids was work enough not including the boat issues! Thanks guys and I hope this report helps somehow!