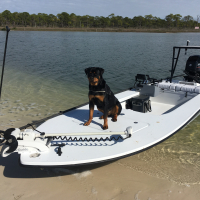 It was ladies night on the big stage as the top honors in the 2013 Bisbee’s Black & Blue Marlin Tournament went to two female anglers. Linda Williams and her crew aboard II Success captured first place overall team, the overall tournament jackpot, top captain award and daily jackpots up to the $2,000 level after boating a 774-pound blue marlin on the Friday. That fish also turned out to be the biggest of the week and the largest ever weighed by a lady angler in the history of the B&B. It earned $368,675 out of the $2.9 million in overall prize money available. One hundred and four teams from several countries competed in this year’s event.

Martha McNabb and her Retriever team missed the top prize again (she has finished second previously), although she settled for the largest overall payout. Her 525-pound blue marlin was worth $1,185,862. Retriever won second place overall, second place jackpot, top captain honors for Tony Araiza and daily jackpots for the first two days since no qualifiers were boated on the first day.

Team Sooner Reelin’ captured third place overall with the only eligible black marlin for the week, a 342-pounder reeled in by James Long. The Oklahoma team’s prize money totaled $34,762. Go Deep, with one of the five Japanese teams on board, claimed fourth place with a blue marlin weighing 323 pounds. Yugi Takagi and his team are returning to Japan with $9,270 in cash prizes.

The Black & Blue is an optional jackpot tournament and Sea Angel showed why betting across the board can be so lucrative. Austin Angel and his family team boated a 313-pound blue marlin on Friday, just 13 pounds over the minimum weight, yet they earned an overall payout of $966,680 for that fifth-place fish by entering in all the regular jackpot categories.

Titan, the first sailboat ever competing in the Black & Blue, hung on to win first place in the release division. Titan collected $63,537 for three blue marlin releases based on time. Cojones was second ($21,993), while Reel Pain II came in third ($12,218) with three marlin releases apiece. Ironically, Titan and Reel Pain II also boated undersized marlin on Friday when an additional release could have determined the final outcome.

The 104-boat fleet released 58 blue and three black marlin during the three days of fishing. Dozens more striped marlin and sailfish were also released but didn’t count in the standings.

In addition to handing out nearly $3 million in prize money Saturday evening, the Black & Blue gave away more than $200,000 to local and international humanitarian organizations, including Casa Hogar and Reel Life International. Silent and live auctions also generated additional funds for RLI and The Billfish Foundation.

The Black & Blue is the last event in the Bisbee’s Baja tournament series. The 2014 season begins August 5-9 with the East Cape Offshore at the Hotel Buena Vista Beach Resort before shifting back to Cabo on October 17-19 for the Los Cabos Offshore and October 21-25 for the 2014 Black & Blue. Cabo Riviera is the presenting sponsor, with Baja Cantina, Wyndham Resort, Baja California Sur and Los Cabos Departments of Tourism, Puerto Paraiso Mall, Hotel Buena Vista Beach Resort and numerous other benefactors adding their support.

There have been many dramatic wins throughout the Black & Blue’s 33-year history. But 2013 will always be remembered as the year of the lady angler. As Martha McNabb said before walking off the stage, “Chicks catch fish!”