Big Battery Posts: 21,882 AG
September 2013 in Politics #1
Quite frankly, I am weary of trying to use logic to convince illogical, feelings oriented people who care little for the rule of law, personal liberties and private property. I believe that this guy's position has merit and I believe the repubs should embrace this notion instead of feigning one more failed vote. Take the administration to court, press for full implementation of the law NOW and press forward and allow the Liberal Utopia finally collapse under its own weight. Instead of chiseling away at the liberal dream, let it go and die finally. Let people see what really happens when you run out of other people's money.

As its Oct. 1 implementation date arrives, ObamaCare is the biggest bet that American liberalism has made in 80 years on its foundational beliefs. This thing called "ObamaCare" carries on its back all the justifications, hopes and dreams of the entitlement state. The chance is at hand to let its political underpinnings collapse, perhaps permanently.

If ObamaCare fails, or seriously falters, the entitlement state will suffer a historic loss of credibility with the American people. It will finally be vulnerable to challenge and fundamental change. But no mere congressional vote can achieve that. Only the American people can kill ObamaCare.

No matter what Sen. Ted Cruz and his allies do, ObamaCare won't die. It would return another day in some other incarnation. The Democrats would argue, rightly, that the ideas inside ObamaCare weren't defeated. What the Democrats would lose is a vote in Congress, nothing more.

A political idea, once it becomes a national program, achieves legitimacy with the public. Over time, that legitimacy deepens. So it has been with the idea of national social insurance.

German Chancellor Otto von Bismark's creation of a social insurance system in the 19th century spread through Europe. After the devastation of World War I, few questioned its need. In the U.S., Franklin Roosevelt's Social Security system was seen as an antidote to the Depression. The public's three-decade support for the idea allowed Lyndon Johnson to pass the Medicare and Medicaid entitlements even in the absence of an economic crisis.

Going back at least to the Breaux-Thomas Medicare Commission in 1999, endless learned bodies have warned that the U.S. entitlement scheme of Social Security, Medicare and Medicaid is financially unsupportable. Of Medicare, Rep. Bill Thomas said at the time, "One of the biggest problems is that the government tries to administer 10,000 prices in 3,000 counties, and it gets it wrong most of the time." But change never comes. 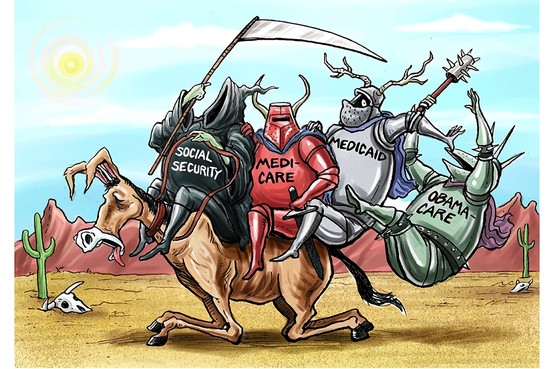 The Four Horsemen of the Democratic Apocalypse.

Medicaid is the worst medicine in the United States. It grinds on. Doctors in droves are withdrawing from Medicare. No matter. It all lives on.

An established political idea is like a vampire. Facts, opinions, votes, garlic: Nothing can make it die.

But there is one thing that can kill an established political idea. It will die if the public that embraced it abandons it.

Six months ago, that didn't seem likely. Now it does.

The public's dislike of ObamaCare isn't growing with every new poll for reasons of philosophical attachment to notions of liberty and choice. Fear of ObamaCare is growing because a cascade of news suggests that ObamaCare is an impending catastrophe.

Big labor unions and smaller franchise restaurant owners want out. UPS dropped coverage for employed spouses. Corporations such as Walgreens and IBM are transferring employees or retirees into private insurance exchanges. Because of ObamaCare, the Cleveland Clinic has announced early retirements for staff and possible layoffs. The federal government this week made public its estimate of premium costs for the federal health-care exchanges. It is a morass, revealing the law's underappreciated operational complexity.

But ObamaCare's Achilles' heel is technology. The software glitches are going to drive people insane.

Creating really large software for institutions is hard. Creating big software that can communicate across unrelated institutions is unimaginably hard. ObamaCare's software has to communicate—accurately—across a mind-boggling array of institutions: HHS, the IRS, Medicare, the state-run exchanges, and a whole galaxy of private insurers' and employers' software systems.

Recalling Rep. Thomas's 1999 remark about Medicare setting prices for 3,000 counties, there is already mispricing of ObamaCare's insurance policies inside the exchanges set up in the states.

The odds of ObamaCare's eventual self-collapse look stronger every day. After that happens, then what? Try truly universal health insurance? Not bloody likely if the aghast U.S. public has any say.

Enacted with zero Republican votes, ObamaCare is the solely owned creation of the Democrats' belief in their own limitless powers to fashion goodness out of legislated entitlements. Sometimes social experiments go wrong. In the end, the only one who supported Frankenstein was Dr. Frankenstein. The Democrats in 2014 should by all means be asked relentlessly to defend their monster.

Republicans and conservatives, instead of tilting at the defunding windmill, should be working now to present the American people with the policy ideas that will emerge inevitably when ObamaCare's declines. The system of private insurance exchanges being adopted by the likes of Walgreens suggests a parallel alternative to ObamaCare may be happening already.

If Republicans feel they must "do something" now, they could get behind Sen. David Vitter's measure to force Congress to enter the burning ObamaCare castle along with the rest of the American people. Come 2017, they can repeal the ruins.

The discrediting of the entitlement state begins next Tuesday. Let it happen.
link
0 · Share on TwitterShare on Facebook
«12»