e-money Posts: 4,258 Captain
August 2013 in Southeast General Fishing & The Outdoors #1
Did maiden voyage last week w Team Outlaw and back for round 2.
(Trip 1 was a success w a SOLID wahoo getting slid thru the transom door!
Overall had a good week last week or so on wahoo going 3 fish for 6 trips,
but not near as hot as Gangnam Style :hail)
That was a VERY cool video and solid work by SEVERAL teams, but I digress :grin :angel

Original plan was to both wahoo and snapper fish for short PM trip.
Cleared Jupiter about 4:21 and water was high(high tide at 4) but "iffy" on quality compared to earlier in the week. (sea-green)

Get out to 70' (and out to 230+')and there are literally HUNDREDS of thousands of Jellyfish from surface to 30' down.

The Box Jelly's are back and there were HUGE swarms that turned the water almost pink.

We Also an abundance of grass on rips and in the 100-140 range so we quickly switched gears and went to bottom fish.


Set up off Juno pier in 115' with 1.6 knots of current and fairly blue water.
First fish up was a nice yellowtail, followed by a porgy, a grunt and a mango.
Had STEADY action for an hour and a half or so. Caught a few more snapper but mostly "exotics":grin
IE Wrasse, Queen Triggers, Squirells, Remoras, Runners, Grunts and lost a grouper that we had off bottom, then rocked us up.

All in all the guys had fun, we saved some fuel, and laid plans for islands missions.
Boat ran great and short video of "wake-age" 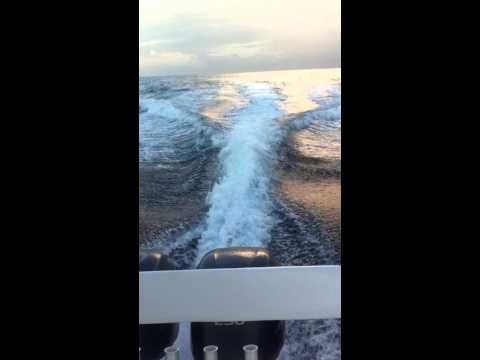 Not red hot by any stretch, but guys learned a bit and nice departure from HS trolling.
Have a great day and thanks for reading!!